Durkan hits back at pledge to defund Seattle PD by 50%

The mayor offered ideas to restructure the department but rejected calls for deeper cuts. 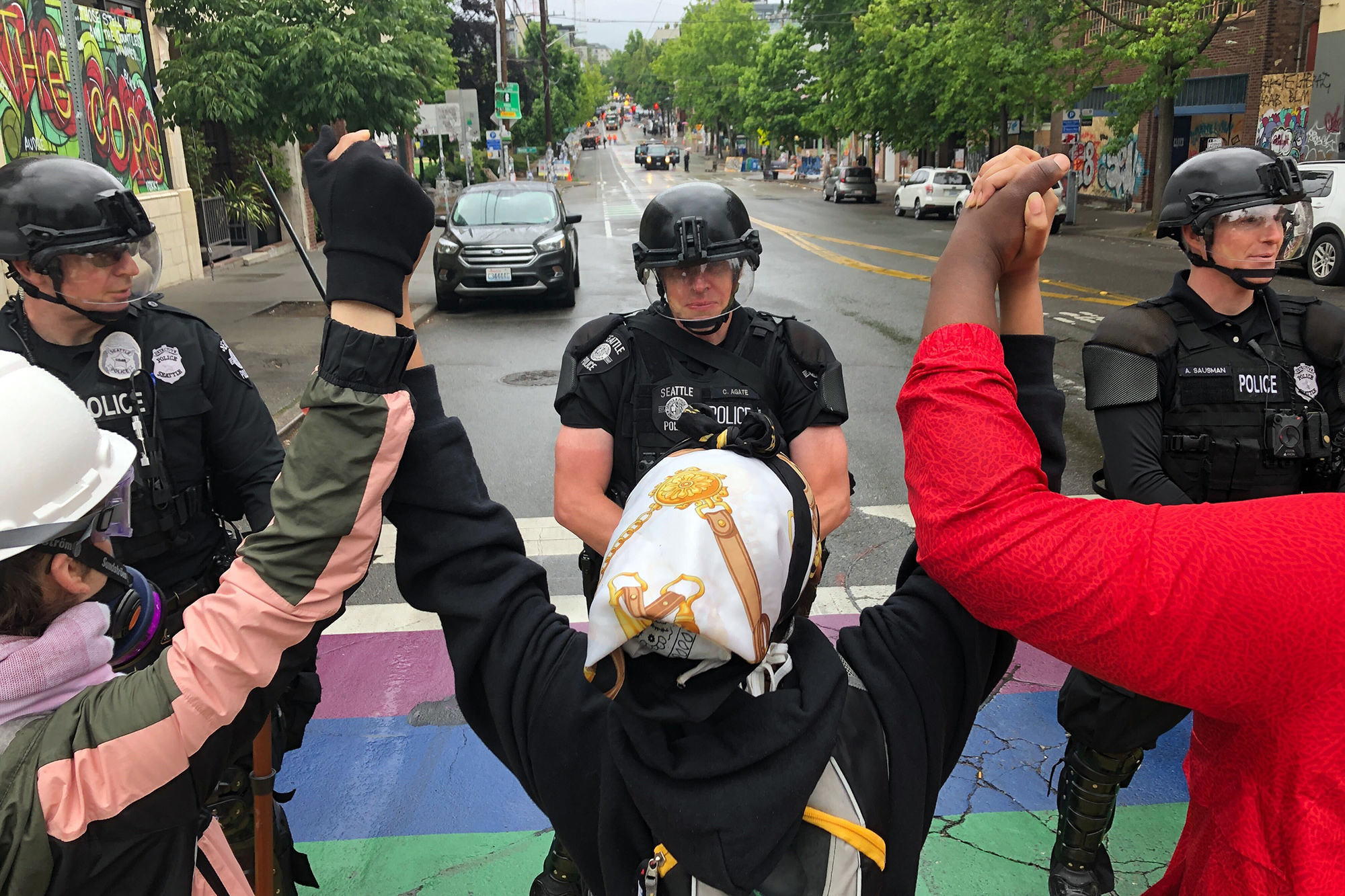 Protesters form a line in Seattle police officers, who are standing in front of a road block as the city clears out CHOP, July 1, 2020. A city council vote pledged to reduce the police budget by half, but Mayor Jenny Durkan called the plan "irresponsible" and has proposed fewer cuts and removing from certain functions from policing. (Elaine Thompson/AP)

Even as the protests in Seattle demanding radical changes to public safety have reduced to a simmer, their impact continues to reverberate in City Hall. The result: a looming fight over potentially dramatic cuts to the Seattle Police Department and tension between branches of city government not seen for years.

On Monday, Mayor Jenny Durkan announced the city would reduce the scope of the Seattle Police Department by removing from its purview certain functions related to officer accountability, 911 dispatch and parking enforcement. This announcement, which Durkan says would constitute the reallocation of $56 million from the department budget in 2021, comes in addition to her previous proposal to slice $20 million from the department’s budget, mostly in response to economic strain created by the response to the COVID-19 pandemic.

The city this year is facing a nearly $400 million budget deficit from impacts of COVID-19. With the newfound motivation to rethink policing, the two once-in-a-generation events — the pandemic and the protests — have converged in the city’s negotiations on how it can and should spend its money.

In total, the cuts that Durkan proposed Monday would amount to just under 20% of the department’s budget, although that money would still go toward similar purposes, just in a different part of city government.

As Durkan laid out her vision — which she sought to paint as measured and studious — she simultaneously slammed the council for what she called “arbitrary” and “irresponsible” commitments to reducing the size of the police department by 50%.

Last week, seven of nine council members — a veto-proof majority — said they were committed to cutting the police department by 50%, although the preferred path and timeline to those cuts remain unclear for individual members of the council. The council members largely took their cues from local activists who have built and sustained pressure on the city to enact radical change and commit to the 50% number.

Although the council has not voted on the cuts, the pledges caught national attention. While “defund the police” has become a national rallying cry, Seattle appears unique in the level of momentum toward making that slogan a reality. In Minneapolis, the city council has also responded to protester demands, promising to dismantle its police department.

Durkan Monday flatly rejected the approach, saying if the council did pass such cuts, she would veto them.

“This is simply not responsible,” she said. “You can’t govern by Twitter or bumper sticker. Community safety is too important not to have a thoughtful approach.”

Seattle Police Chief Carmen Best said a 50% cut would lead to mass layoffs. “There is simply no way safety will not be compromised if these officers are fired,” she said.

Speaking at a morning meeting, Council President Lorena González defended their approach. "The Council is not looking at blunt cuts as described by executive," she said. "We are looking at scalpel-like approaches to scale down what we use law enforcement to respond to and what we can scale up."

How Durkan’s proposed moves would impact operations and staffing is unclear; 911 dispatch is already mostly civilian-led, but the Office of Police Accountability is made up largely of sworn officers, making its removal from SPD complicated. Parking enforcement would be moved to the city’s Department of Transportation.

Compared with the ambitions of the Seattle City Council, Durkan’s proposals are certainly more limited. But the mayor said the cautious approach is necessary, considering the scope of the task before the city. She acknowledged that many 911 calls in the city don’t need officer response, but that there needs to be analysis and work to create a new system to take the place of the old one.

“All of these potential areas for transformation are deeply complex,” she said.

In Seattle, the city council has leaned more liberal than the mayor for years, but after a progressive rout in last November’s election, the divide has become even  starker.

The result has been a council much more responsive to the demands of the city’s activists, particularly organizations representing Black and brown communities.

Mosqueda pledged to “follow the lead” of the groups. “History has taught us change only comes from those living on the margins rising up,” she said.

González, who’s spent much of her career working on more incremental reforms to police, apologized for some of her past votes, including one in 2018 to approve a contentious new contract with the Seattle Police Officers Guild.

On Monday, Councilmember Sawant — Durkan's most outspoken critic — had typically harsh words for the mayor and Chief Best, rejecting their argument that services would be negatively impacted. "We have to talk about how police only spend a small minority of their time investigating the actual egregious crimes," she said. "A majority of the police time... is used in harassing poor communities, communities of color, homeless neighbors, abusing protesters and, in the case of our sisters like Charleena Lyle, shooting the very people who have called them for assistance."

Meanwhile, Councilmember Andrew Lewis has said he wants to create a new, alternative 911 system that could respond to calls where police aren’t deemed necessary.

Durkan said she, too, has been meeting with community representatives. She pointed specifically to representatives of the Black religious community and protesters. In response to a question Monday, she said she would produce a list of other meetings she has had.