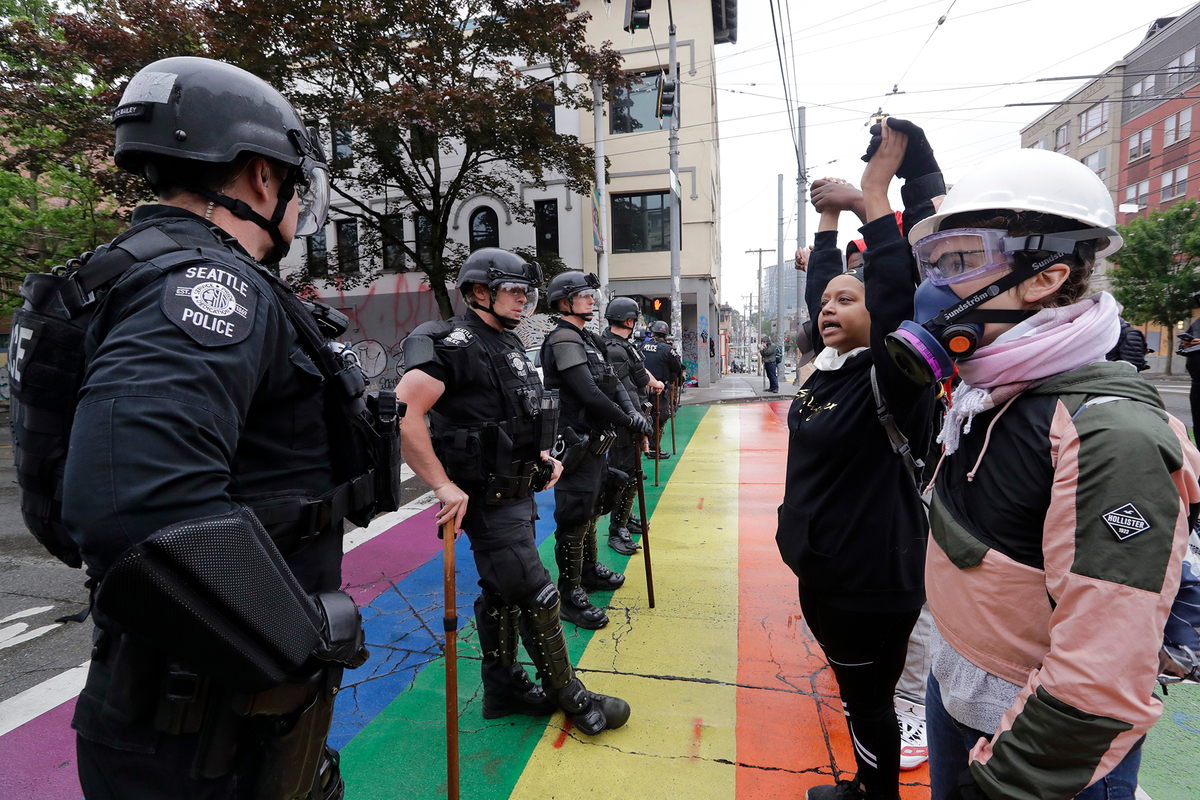 Protesters hold hands in front of a line of police officers blocking a street Wednesday, July 1, 2020, in Seattle, where streets had been blocked off in an area demonstrators had occupied for weeks. Seattle police showed up in force earlier in the day at the "occupied" protest zone, tore down demonstrators' tents and used bicycles and other tactics to disperse the protesters after the mayor ordered the area cleared following two fatal shootings. (Elaine Thompson/AP)

Seattle Mayor Jenny Durkan’s political career may become a casualty of the same war for “law and order” she has waged as both prosecutor and mayor. On July 10, King County Superior Court Judge Mary E. Roberts approved a petition to recall Durkan from office on the grounds that she “failed to institute new policies after learning of the use of chemical agents on peaceful protesters as a means of crowd control during a public health emergency.”

Parts of Seattle have resembled a war zone in recent weeks, with anti-police brutality uprisings prompting yet more police brutality. But maybe Durkan wanted it this way.

Read more on the history of Seattle police reform

July 2020 was 15 hours old when Durkan — glowing with triumph after the Seattle Police Department dismantled the area formerly known as “CHOP” — referred to the city’s police officers as “troops” at an official press conference. Durkan used the same descriptor in a June 11 interview on Seattle’s Fox News affiliate, Q13. Since no clarification or retraction was ever issued, we have to conclude that, in saying “troops,” she said exactly what she meant. So when the officers of the Seattle Police Department ransacked the Capitol Hill Organized Protest zone in the early hours of July 1, they did so as soldiers, using methods of dubious legality and occupying a liminal space between “law and order” and lawlessness that call to mind literal police states.

In an apparent contradiction of a city ordinance forbidding Seattle police from using rubber bullets and respiratory irritants like pepper spray, said weapons were used to scatter protesters during the CHOP removal.

In an apparent breach of a Seattle Municipal Code section that prohibits the forced dispersal of journalists, several reporters were obstructed or arrested by Seattle cops, even after presenting press credentials.

In an apparent violation of a gubernatorial mandate that made failing to wear a mask during the COVID-19 pandemic a misdemeanor, multiple officers were captured on video wearing nothing but riot gear.

In an apparent transgression of a directive from Seattle Police Chief Carmen Best that required Seattle officers to uncover their badge numbers, a bevy of officers did no such thing.

In a historical moment when Seattle police have been the subject of much scrutiny, the Seattle Police Department seemed eager to skirt the line between enforcing the law and engaging in potentially illegal behavior when it went to war on Capitol Hill.

But then again, undermining the law to uphold it is nothing new for Seattle’s “troops.”

As the Washington chapter of the American Civil Liberties Union has noted, the brunt of police violence has historically been borne by Black and Indigenous Seattleites. But Seattle police have also helped enforce xenophobic American foreign policies domestically. The results have been devastating for peoples of Asian descent — even those who tried to combat white supremacy by adopting aspects of “traditional white Americanness,” as the writer and organizer Dae Shik Kim Jr. recently remarked in The Nation.

When angry white mobs expelled Seattle’s Chinese population after Congress ratified the Chinese Immigration Exclusion Act in 1882, the Seattle Police Department was there to lend a hand … to the mob. Seattle’s Chinese population was tiny (a thousand residents, or 10% of the city’s population). But white workers accused them of stealing jobs and depressing wages. And so on Feb. 7, 1886, a militia made its way through Chinatown, with Seattle cops citing Chinese Seattleites for disobeying frivolous city ordinances. Police helped vigilantes evict the city’s residents of Chinese ancestry, forcibly placing them and their belongings aboard a China-bound boat docked at Main Street.

As Seattle’s Chinese American population recovered in the early 20th century, Seattle’s Japanese and Filipino American communities were also coming into their own. With increased visibility came xenophobic policing. Seattle cops testified to the 1930 U.S. National Committee on Law Observance that Filipinos were “our great menace,” “all criminally minded,” and “great chasers of white women.”

In the 1930s, when American foreign policy was fueled by fear of Bolshevism, membership in unions like ILWU 19 helped shield Seattle workers of Philippine ancestry from exploitation and racism. But as the Brown University professor Alex Gourevitch relays in his essay “Police Work: The Centrality of Labor Repression in American Political History,” when workers picketed, “police became a quasi-military force whose central purpose was strikebreaking.” During the “Battle of Smith Cove” in 1934, Seattle police used machine guns and tear gas on union leaders.

Eventually, the economic downturn of the Great Depression turned into federal mobilization for World War II. When it did, Seattle Police Department turned its attention to the city’s Japanese American community. Even before President Franklin D. Roosevelt signed Executive Order 9066 in February 1942, initiating the incarceration of Japanese Americans in the country, the Seattle Police Department had already established a “National Defense Detail.” In late 1941, with no directive or direction from the federal government or military, Seattle police interrogated and collected information about Japanese American business owners, independently apprehended 55 “alien enemy suspects” of Japanese ancestry and even arrested suspected draft dodgers.

When Seattle’s “troops” couldn’t terrorize Seattleites of Asian ancestry directly, they violated the civil liberties of Seattleites who protested for Asian peoples abroad. When anti-Vietnam War demonstrations rocked Seattle beginning in the late 1960s, Seattle police became unhinged. Three hundred misconduct complaints related to police aggression during protests were filed against Seattle cops in 1969. The late Rick Anderson — author of the book Seattle Vice: Strippers, Prostitution, Dirty Money, and Crooked Cops — noted that Seattle police in this period “covered up their badge numbers so they couldn’t be identified in the assaults.”

When Durkan called Seattle cops “troops,” did she realize the implications? On the occasion of the one-year anniversary of 9/11, activist and author Arundhati Roy observed that “civil liberties are being curtailed to fight the War on Terror.” Like the U.S. military, Seattle police have historically used extralegal means (seizure of property, surveillance) to achieve extremist ends (ethnic cleansing). That the Seattle Police Department currently maintains a $13.3 million budget for “homeland security” is an artifact of the days when Seattle cops were an occupying army in Seattle’s communities of color.

Since 2013, 20% of Seattle police’s new hires were military veterans. In that period, city documents reveal that the Seattle Police Department spent $60,372 sending Seattle police officials to Palestine. There, the city’s cops —including Best  — learned counterinsurgency techniques from an Israeli military that received $3.8 billion in U.S. aid in 2019.

The link between American foreign policy and domestic policing in Seattle is therefore less figurative than it is literal — not metaphoric, but material.

Overseeing the Seattle Police Department’s current bevy of possible civil liberty violations is Mayor Jenny Durkan, a former U.S. attorney who seemed to look upon the Capitol Hill Organized Protest as Gen. Douglas MacArthur did Korea. Where President Harry Truman and U.N. forces hoped to limit American military involvement in Korea in the early 1950s, MacArthur — under the influence of powerful weapons manufacturers like Seattle’s own Boeing — hoped to use the specter of communism to escalate conflict. In her own vein, Durkan seized on gun violence in the Capitol Hill Organized Protest zone as a pretext to clear the area, using violence of a different sort; the kind perpetuated by her “troops.”

Perhaps Seattleites should have seen it coming. In her capacity as a U.S. prosecutor, Durkan facilitated the kind of affront to civil liberties that one may associate more readily with George W. Bush’s PATRIOT Act. In 2012, decisions by Durkan’s office left  two completely innocent people in solitary confinement in a federal detention center because they refused to testify against May Day protesters. While there is as yet no substantiated evidence that Durkan has actively undermined Black Lives Matter protests in recent weeks, the city does have the tools to do so, as the Seattle Municipal Code allows for employing infiltrators in its police protocols. Durkan’s tear gas is but one tool in the war on dissent.

In the aftermath of an influenza pandemic, where World War I accelerated the spread of a respiratory disease, the 1925 Geneva Protocol banned tear gas from use in war forever. On several occasions in recent weeks, Seattle police — seemingly unconcerned with COVID-19 — used the chemical agent on protestors, covering the city’s most densely populated residential neighborhood with it on June 7.

Instead, Seattle police repeated the mistakes of the past, hoping they’d be revered like Robocop, and initiating a referendum on policing instead. As Alex Vitale wrote in The End of Policing, “police often think they’re soldiers in a battle, rather than guardians of public safety. That militarized [police] units proliferated during the War on Drugs and the post-9/11 War on Terror fuels this perception.”

Seafair 2020 is nearly upon Seattle. In a pre-COVID world, this festival came with customary celebrations of American military might, performed most extravagantly every August when the Blue Angels soared over Lake Washington. But Seattleites fiending for their nationalist fix need not linger long waiting for fighter jets to take flight again. For in this moment, war’s embers burn brilliantly on the seventh floor of City Hall.

How long will General Durkan be stationed there?