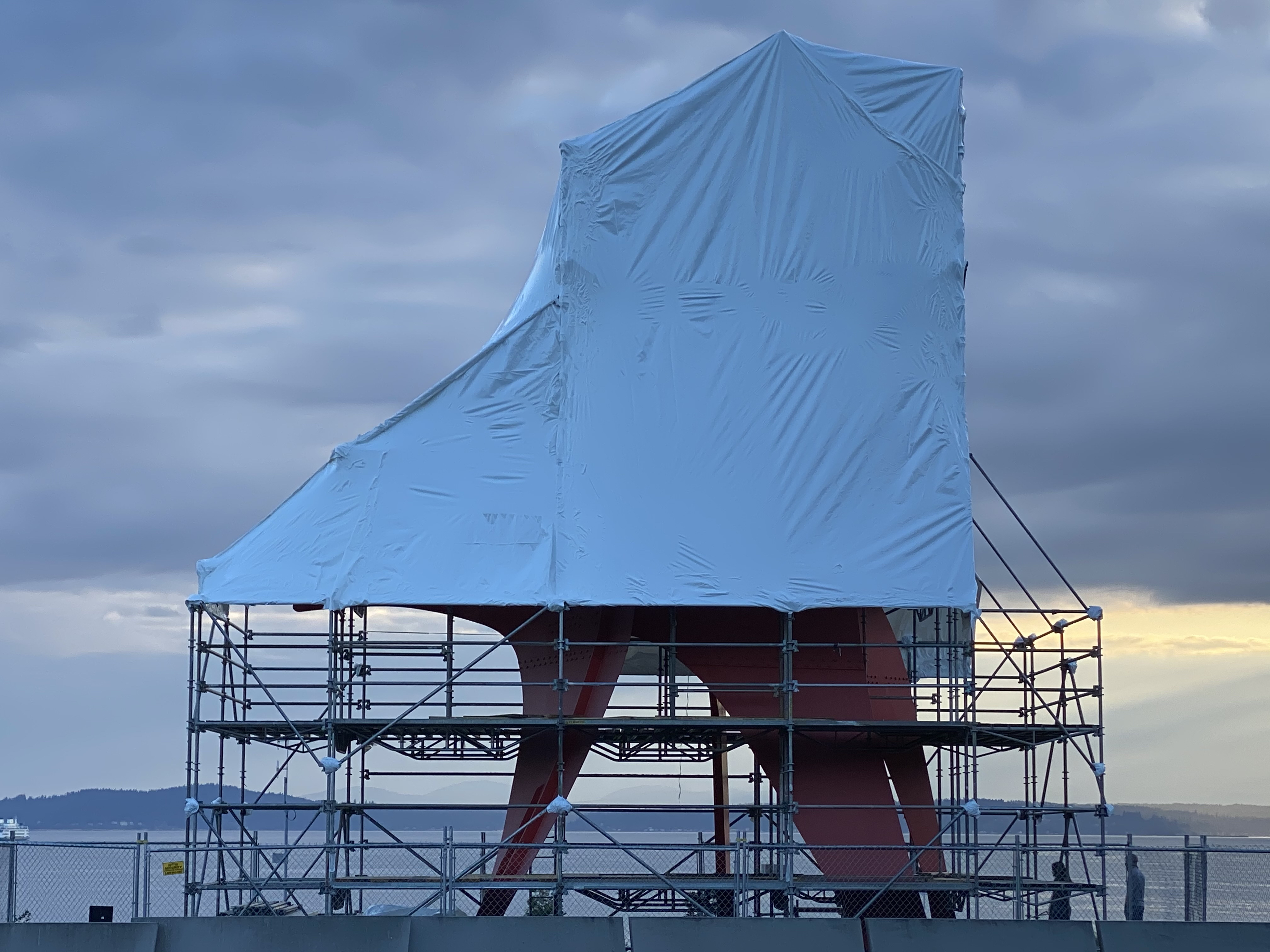 The big fall fashion shows and glossy style magazines will have to pivot like everyone else this season, but even without them we all know what the hottest trend is — masks, dahling. I’m curious to see how the new “must-have” accessory (no, literally, you must have one to get in anywhere) is incorporated into future haute couture.

Local designers are already making masks de rigueur. As Crosscut arts reporter Margo Vansynghel writes this week, for many small Seattle brands, adding stylish masks to clothing lines is helping to keep business afloat, while at the same time pitching in for public health. And since it looks like we’ll need masks for the foreseeable future, we might as well stock up on an array of outfit options that are both chic and safe.

Even some local government officials — a group not known for daring sartorial moves — are making masks a statement piece. This week Rep. Suzan DelBene (from Washington’s Congressional District 1) kicked off the “On Wednesdays We Wear Pink” campaign (#onwednesdayswewearpink), inspired by a line in the movie Mean Girls, to encourage mask wearing among fellow congressional members. Gov. Jay Inslee got in on the trend, sharing a photo of himself wearing a Pepto-pink mask on Twitter. While his mask looked decidedly Photoshopped, the message — get this confounded curve flattened — was clear. 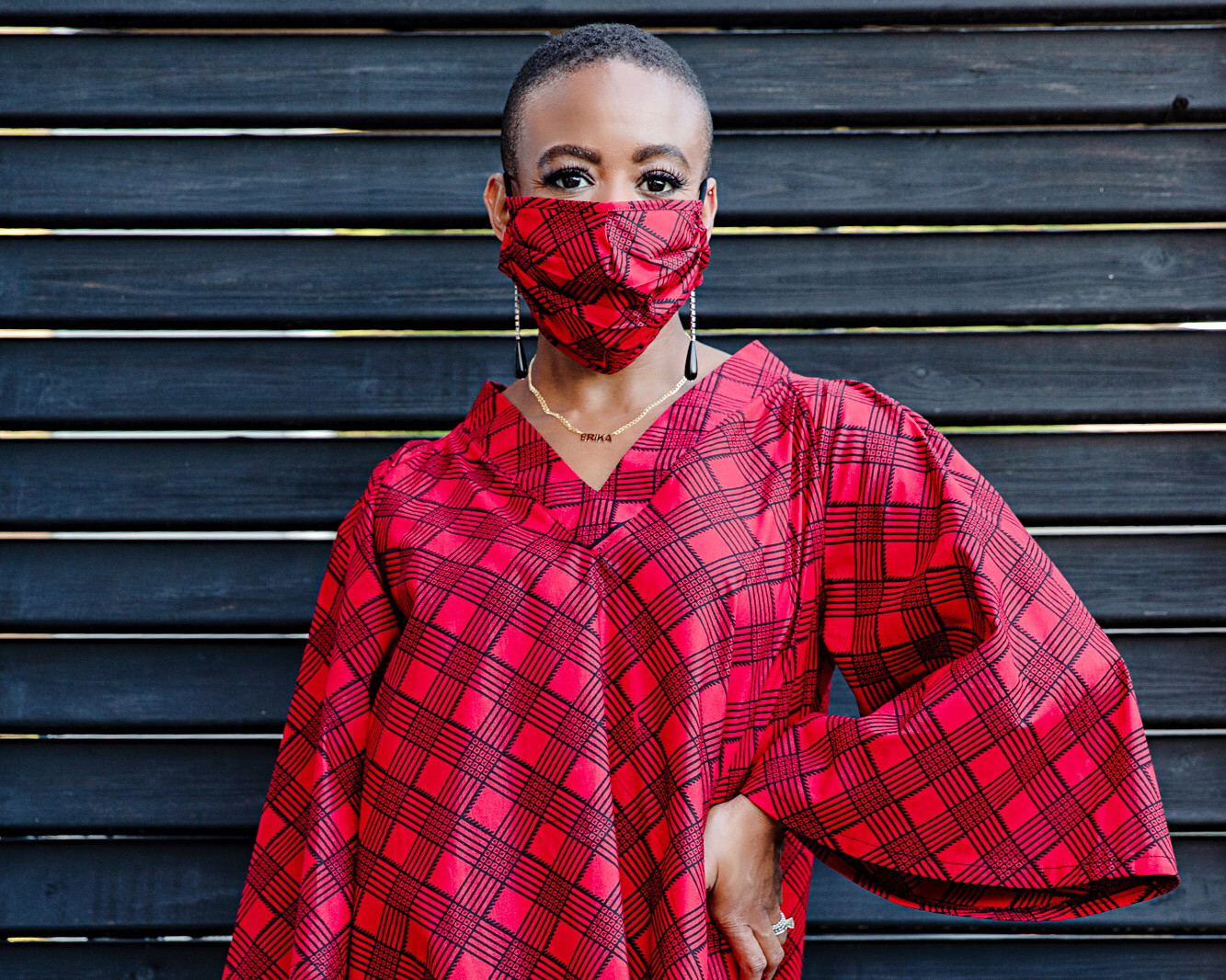 Speaking of flattened curves, if you’ve been near the Olympic Sculpture Park this week you might have noticed that the red “Eagle” sculpture, by Alexander Calder, is wearing a protective covering too. The 1971 steel sculpture was the first piece installed in the park, which Seattle Art Museum officially opened in 2007. Proudly perched in rain, sleet, sun and salty sea air, the “Eagle” has faded over the years from iconic “Calder red” to more of a deep salmon.

It has had a couple touch-ups before, but the time has come for a full makeover. I spoke briefly about the restoration with SAM chief conservator Nick Dorman, who had just completed a quiet walkthrough of the Seattle Asian Art Museum (which had its grand reopening in February, only to close in March) to check on the state of the art.

I mentioned that Woodland Park Zoo caretakers had reported that during Phase 1 of the stay-at-home order, many of the animals seemed to miss the human interactions they had grown accustomed to when visitors were plentiful. I asked Dorman if perhaps museum artworks experienced the same thing (a weird thing to ask a conservator but, hey, these are weird times). “Oh yes,” he said, playing along. “They seemed a bit listless and sad, but they are safe.”

Regarding the Eagle’s condition, Dorman explained that the sculpture park is a somewhat “hostile environment” for a steel sculpture, and the original paint “wasn’t the most durable.” So underneath that large white wrap, workers are carefully stripping the paint, checking for fissures, applying a primer with anticorrosive elements, and repainting it anew. (The company that made “Calder red” is no longer in business, but a very close match has been secured.) The big reveal should happen around Labor Day.

Thankfully the Olympic Sculpture Park is not a hostile environment for humans and, with its wide-open spaces, it’s still open during the coronavirus closures. “It’s so great we didn’t have to close the park,” Dorman noted. “So much art has been generated during the lockdown and the protests — there’s a lot of art to see in the city right now — but it’s also nice to have a park dedicated to art.” 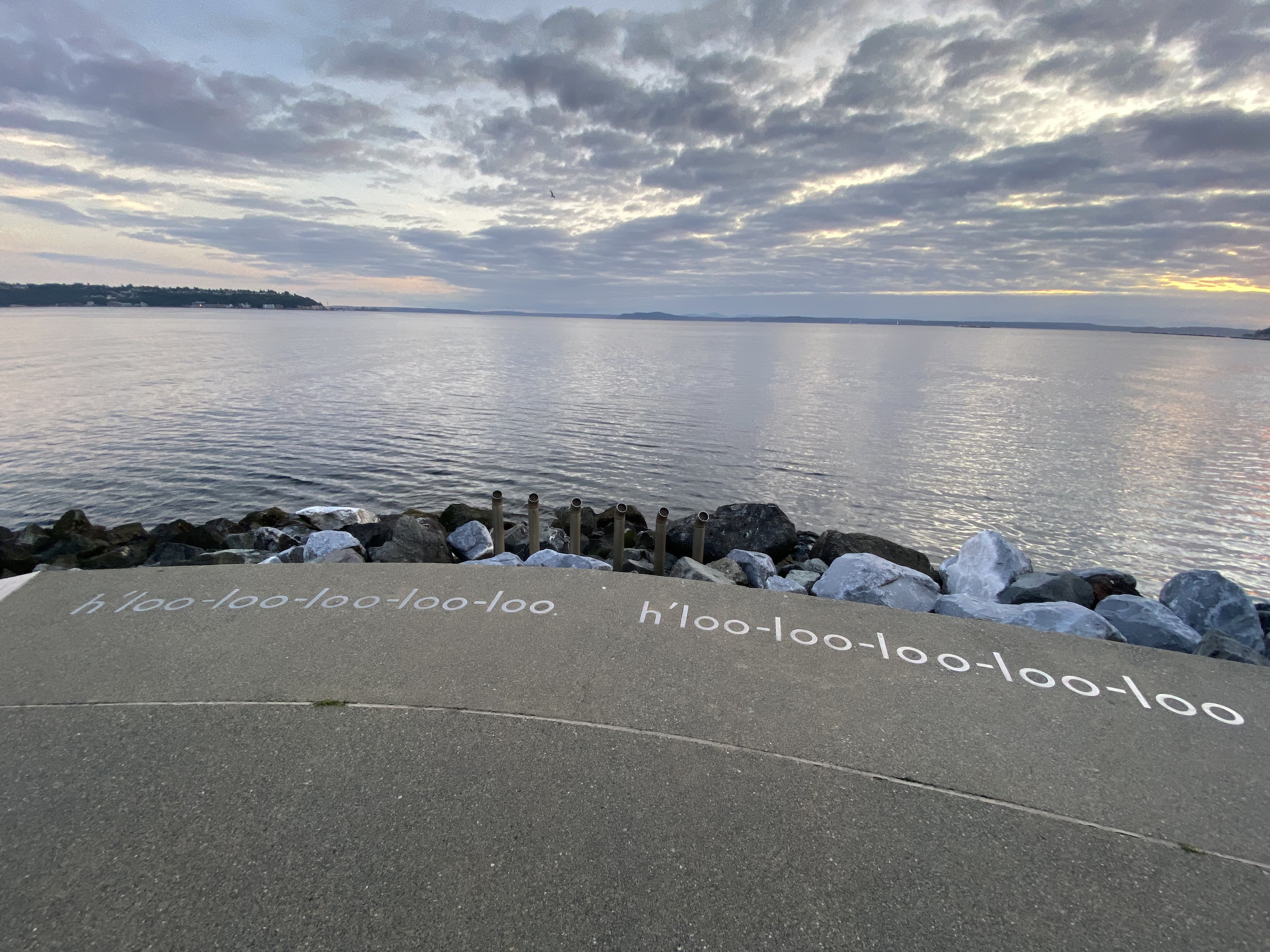 'Undercurrents,' by Seattle artists Laura Haddad and Tom Drugan, is an installation at Myrtle Edwards Park that refers to a Native American myth about water. (Daniel Spils)

'Undercurrents,' by Seattle artists Laura Haddad and Tom Drugan, is an installation at Myrtle Edwards Park that refers to a Native American myth about water. (Daniel Spils)

Even public parks merely dotted with art make for a nice visit. After my recent sojourn to Seattle Center to reengage with the art there, I’m planning to take regular outdoor-art field trips this summer. (Bonus: it bumps me out of the pathways I’ve worn walking around my own neighborhood since COVID-19 hit.) This week, I extended my visit to Olympic Sculpture Park into Myrtle Edwards, a showstopper of a park, with spectacular views of the Olympic Mountains, Puget Sound, ferry and ship traffic and, if you’re lucky, Mount Rainier.

I started at the south entrance to the park, which is near Roy McMakin’s “Love & Loss” sculpture slash word puzzle, part of the Olympic Sculpture Park and surely a message for these strange times. Walking north on the path, the next artwork I encountered also tells a tale of a city. “Undercurrents,” by local artists Laura Haddad and Tom Drugan, is a multilayered piece featuring a curious pictogram hinting at how stormwater is routed through an urban environment.

I had never really looked at it closely before, but this time I noticed the more fanciful elements of the piece — a Magritte-style pipe, garden hoses, a splash of musical notes. Also cool, at the water’s edge: a row of sea organ pipes placed in the water, and the letters h’loo-loo-loo-loo-loo embedded in concrete. The artists have said the word comes from a Native American myth about water, and it sure feels nice flowing off the tongue and into Puget Sound. 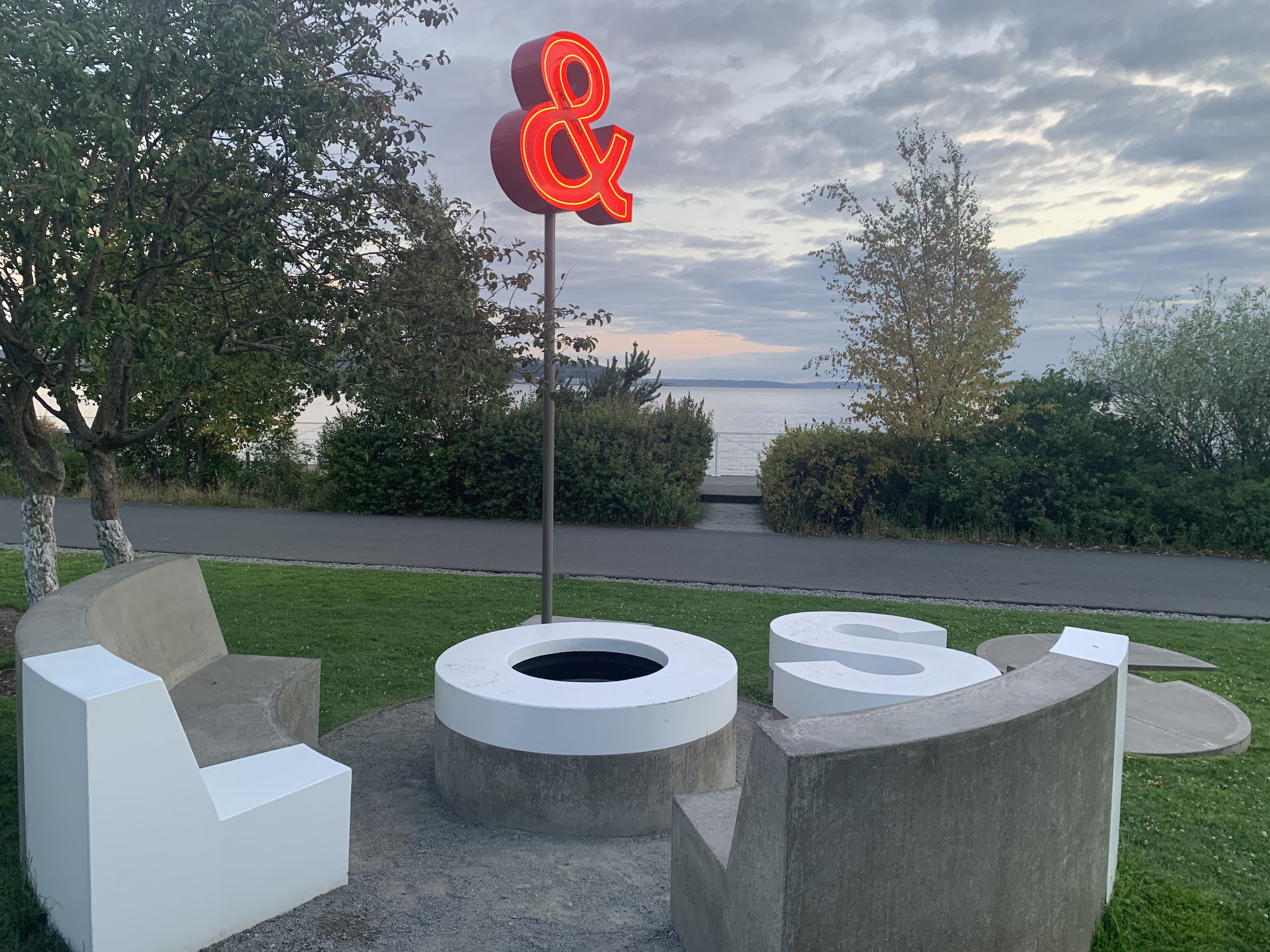 Next up is Michael Heizer’s renowned “Adjacent, Against, Upon” (1976). Made of three massive natural boulders paired with sculpted concrete bases (each weighing 50-some tons), the piece is a classic from the “earth art” movement. Heizer famously refused to ascribe meaning or message to the piece, so he probably would’ve been thrilled to see that a cluster of badged office workers were using the artwork as a socially distanced lunch table.

Just before the grain elevators, I spied another eagle, this one atop the 32-foot tall totem pole carved by three Tlingit artists in 1975. John Hagen, Ed Kasko and Cliff Thomas incorporated several age-old symbols that are always in fashion, and whose meaning holds messages for our current state of affairs: a killer whale, representing tenacity; a hawk, for sharp perception of the future; and a grizzly bear holding a mosquito, signifying that being brave is not easy.