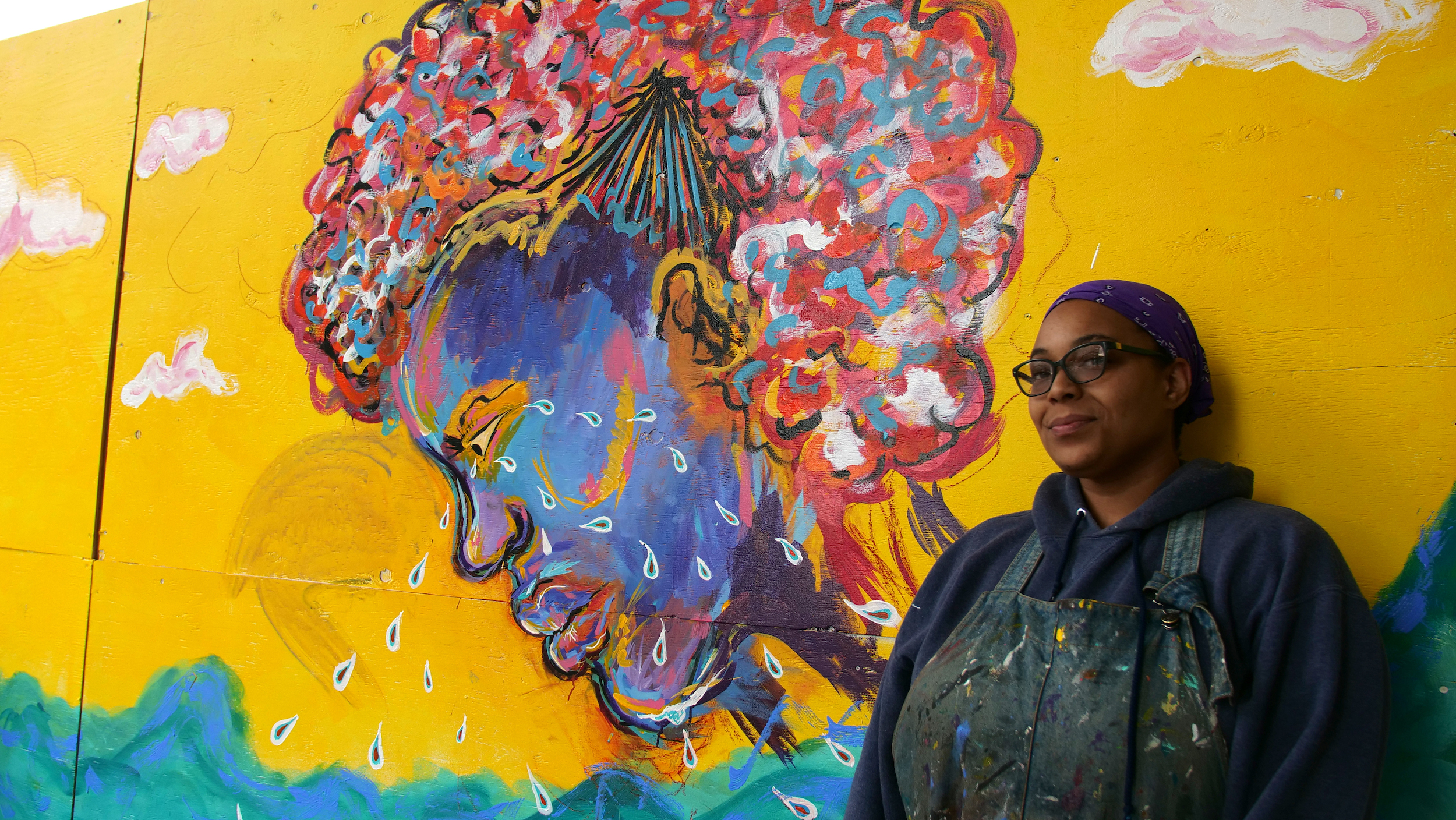 Seattle artist Kimisha Turner stands next to her in-progress mural, “It Ain't Just a River in Egypt,” at the north entrance of the Seattle Art Museum. (L. Fried/SAM)

The Hammering Man is not working from home. When I walked by the iconic sculpture outside the Seattle Art Museum earlier this week, he was there at his station, steadily lifting and lowering his implement, no Zoom meetings in sight. Artist Jonathan Borofsky intended the 48-foot-tall, 26,000-pound mechanical installation to symbolize workers of all genders, races and classes. The piece takes on new significance in the coronavirus era, as the essential workers who are keeping the world turning find themselves on the front lines of COVID-19.

“The Hammering Man celebrates the worker,” Borofsky has said. “Let this sculpture be a symbol for all the people of Seattle working with others on the planet to create a happier and more enlightened humanity.”

Just up the street, a Seattle artist is doing just that. SAM remains closed, but this week painter Kimisha Turner is at work on a new mural adorning the plywood covering the glass façade at First Avenue and Union Street. When I stopped by to see her work in progress, she was adding orange details to an exuberant mandala. Her young son, Malcolm, sat nearby, absorbed in a game.

Turner said as soon as she was commissioned she knew she wanted to do a Black Lives Matter mural (a couple weeks ago, she and Malcolm contributed the “B” to the giant Black Lives Matter street mural on Capitol Hill). Then she had to determine “what kind of image will be powerful, emotional, bright… and hopeful?”

The mural is titled “It Ain’t Just a River in Egypt,” a nod to the old joke about denial. At one end, a woman bows her head and weeps. “Each tear represents the eons of crying through sadness and death,” Turner explained. “She’s crying an ocean over the people who have passed away — from those who jumped from slave ships to those killed by police brutality.” Beautifully expressive hands reach up from the water, pleading. To the right, a trio based on the Japanese wise monkeys (“see no evil, hear no evil, speak no evil”) remains oblivious to the suffering, shielded by an umbrella. “This is my way of urging people to take responsibility,” she said.

Further right, a man’s face emerges from a mountain range, looking toward the mandala. “He represents my son, his dad, uncles — all these people who could be misunderstood, and taken,” Turner said. We spoke briefly about the CHOP protest area, which had been sparked by the BLM marches, and which at that very moment Seattle Police and the Department of Transportation were dismantling. “This is hope,” Turner said of her piece. “Looking toward the future — a new day.”

The midweek downtown pedestrian traffic was much lighter than pre-coronavirus; nonetheless, several people walking by shouted, “Nice work!” and “Looks beautiful!” Turner returned to working on the mandala, its concentric rings and rays, and noted that she often meditates on mandalas to focus her artistic message. “Art should be meditative,” she says. “It has the power to change preconceptions.” 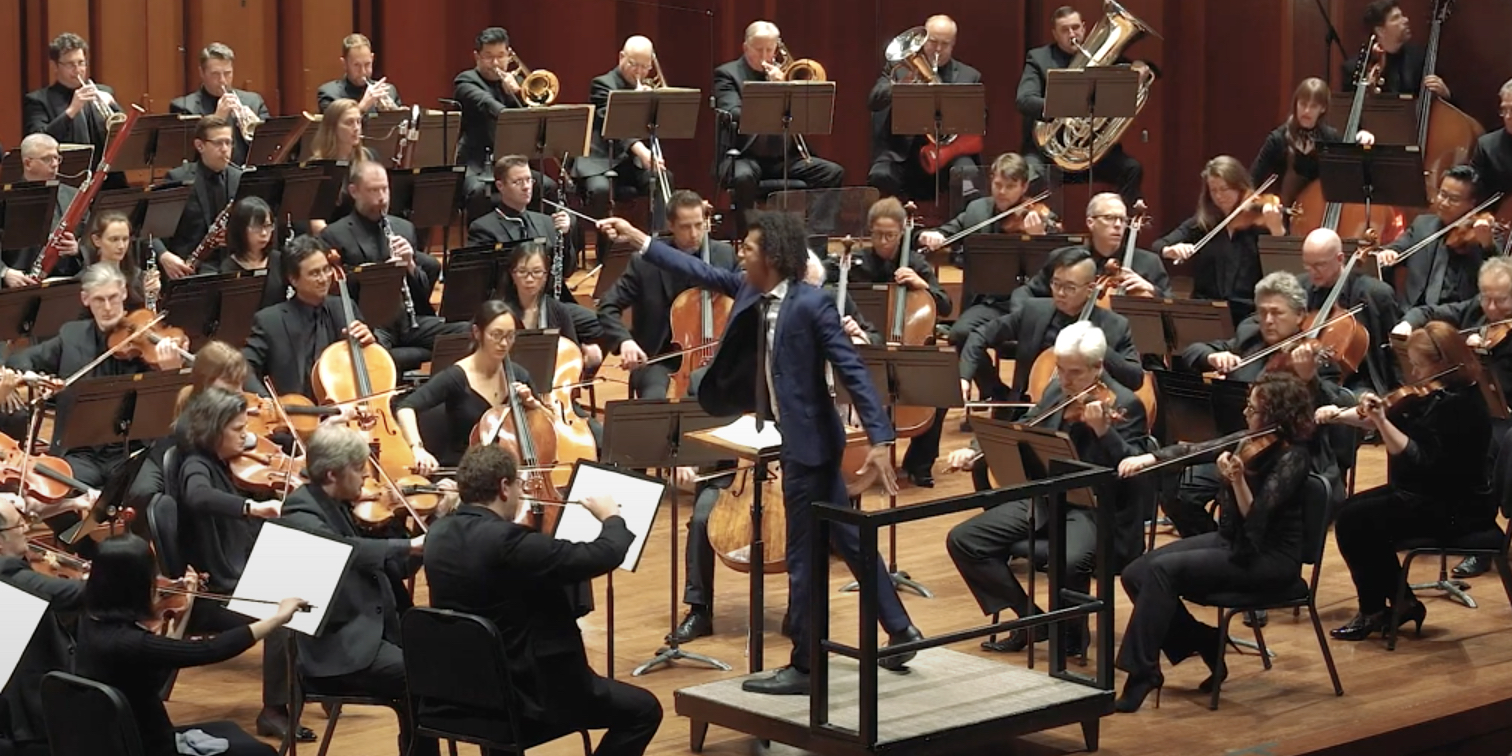 Nobody ever said fireworks were meditative. Especially not this year, when neighborhood fireworks started toward the end of June, freaking out pets and humans alike. Why so early? Is it because we’ve been cooped up for so long? Is it the glut of fireworks due to all the canceled celebrations? Whatever the reason, some people may have already had enough of fireworks by the time July 4th arrives.

But if you’re seeking bright sparks and swelling emotions of another sort, you can find them in Seattle Symphony Orchestra’s free streaming concert this weekend, which includes the U.S. premiere of contemporary British composer Hannah Kendall’s The Spark Catchers (July 2 at 7:30 p.m., July 4 at 8 p.m., July 5 at 2 p.m. on Seattle Symphony’s YouTube and Facebook pages).

Kendall based the piece on a poem by Lemn Sissay, about the women and teenage girls who worked at the Bryant & May match factory in 19th century London (the site of a famous “matchgirl strike” against poor conditions in 1888). Some of the girls’ essential work involved watching for sparks, to ensure that the factory didn’t go up in flames.

Widely hailed at its debut, The Spark Catchers includes movements “Sparks and Strikes,” “Molten Madness,” “Beneath the Stars” and “The Matchgirls’ March,” which range from urgent to brooding, quiet to emphatic. The piece is conducted by another young up-and-comer on the classical music scene: Jonathon Heyward, originally from South Carolina.

In this stellar concert, Heyward also conducts The Planets, the renowned piece by a British composer from another age, Gustav Holst. Written between 1914 and 1916, The Planets features a movement for each orb in the solar system (except Pluto, which had not yet been discovered, and has now been rejected from the planetary canon anyway). But Holst intended the piece to be more astrological than astronomical.

A bit of a zodiac zealot, who purportedly cast horoscopes for friends, Holst based the music for each planet on the traits of astrological signs and symbols. So “Mars,” which is included in the excerpt streamed by SSO, sounds very much indeed like “The Bringer of War.” (Soundtrack composer John Williams thought so, too — it inspired “The Imperial March” in Star Wars.) “Jupiter,” also included in the stream, tends more toward soaring and bouncing, appropriate for “The Bringer of Jollity.”

A dose of jollity sounds pretty good right now. (Speaking of which, the Seattle Aquarium has reopened, with limited capacity and social distancing, and spending a little time with frolicking sea otters might be all the fireworks you need.) Yes, we still have a lot of work to do, holding the pandemic at bay, attending to a social movement of immense import, but moments of joy and art help carry us forward toward that happier and more enlightened humanity.