Since 2013, 20% of entering Seattle officers have had military experience. Some wonder if that's the kind of training the city wants for its police. 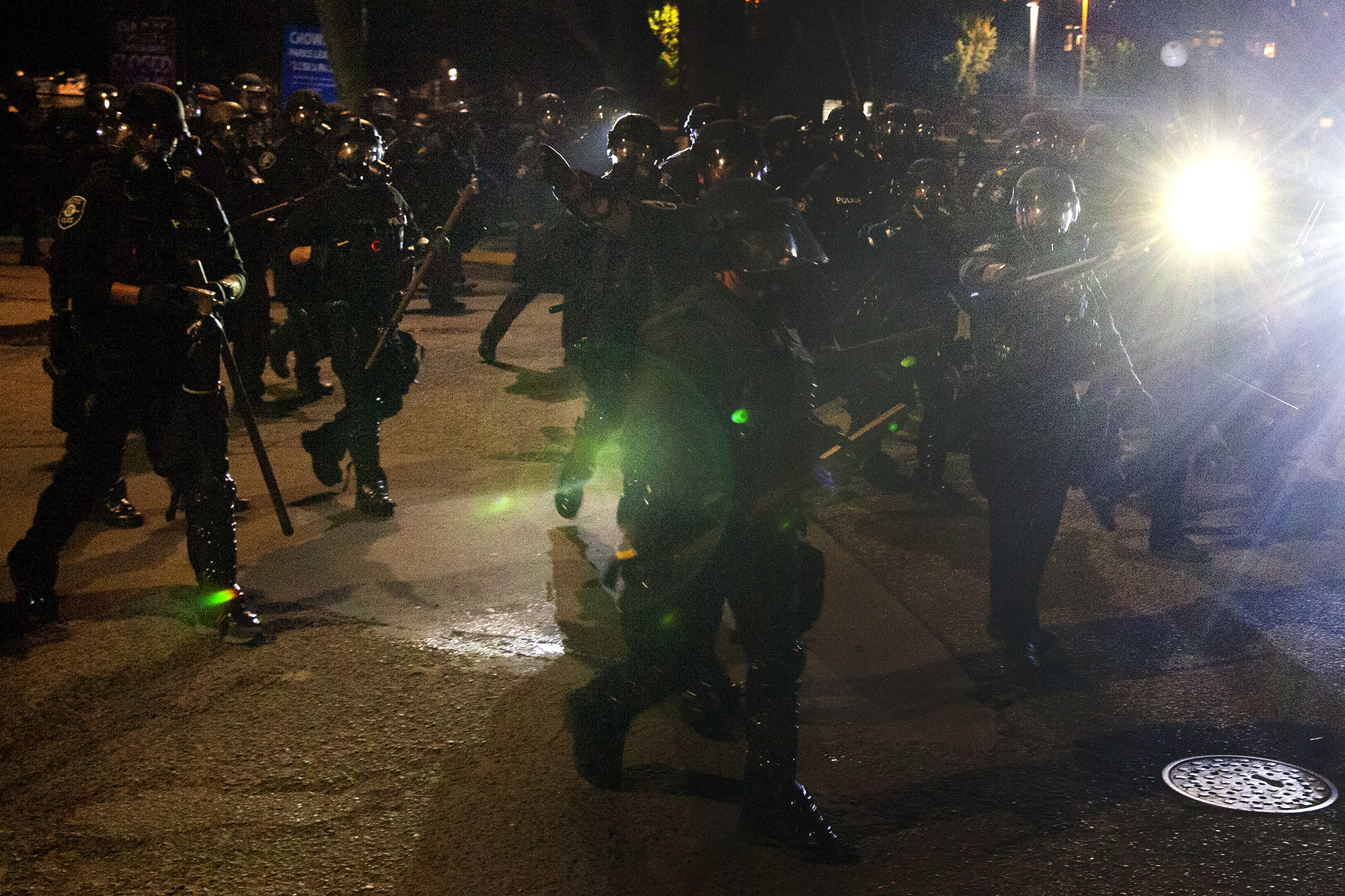 Since 2013, at least 20% of the Seattle Police Department’s new hires have been military veterans, roughly quadruple the proportion within Seattle’s overall population.

As elected officials, police leadership and community advocates hash out the future of policing in this city — its purpose and who’s best equipped to ensure community safety — the relatively high number of cops with military backgrounds is just one data point among many. But amid visions of transforming public safety into something more akin to social work, the frequent addition of veterans may end up on the agenda.

Even as politicians in Seattle and cities across the country embark on a quest to “defund police,” Herbold said it nevertheless remains important to scrutinize who is doing the job today.

“In a context of defunding the police, there are still people whose job it is to enforce the law,” she said. “I think it’s absolutely still critical to talk about the skills, experience and ability that they bring to the job.”

On the first volley of flash grenades and tear gas during Seattle’s protests earlier this month, Abie Ekenezar was transported back to Afghanistan. A veteran of the U.S. Navy Reserves, she recalled the thumping of explosives from her tours of duty overseas.

Ekenezar herself was recruited to join law enforcement as she was leaving the service, even considering it briefly. Now back home and protesting police brutality on Capitol Hill, surrounded by officers in riot gear, she was struck by the notion that some of her former colleagues in the armed forces may not have completely left behind their experiences overseas.

“I honestly believe that it depends on what your mental status is as a person, what you’re exposed to when you’re in and then if you get whatever help you need when you get out,” she said. “I’ve met police officers in the Seattle area where it was like they never left whatever they deployed to, because they just always feel like they can’t turn their back to people.”

Data on whether veterans make good police officers is scant.

One study found veterans were more likely to use their firearms. And the Marshall Project found in 2017 “considerable anecdotal evidence suggesting veterans are more likely to get physical.” Having ex-military make up 20% of its police force makes Seattle pretty average among U.S. police agencies, according to the Marshall Project study, which said 19% of police officers served in the military, compared with 6% of the U.S. population at large.

But Matthew Hickman, a professor at Seattle University and chair of the Department of Criminal Justice, cautioned that even those findings may be clouded by which job assignments are given to veterans — the “go-getters,” he said.

Sue Rahr, executive director of the Washington State Criminal Justice Training Commission, which trains all new police recruits in Washington, said her perception is that veterans tend to be more cautious than what she called the Call of Duty veterans. That's a reference to those with no combat experience but who imagine themselves as tough after playing the war-setting video game.

“My personal experience is that combat veterans are much more capable of making the distinction of being a war fighter and being a peacekeeper in the community,” she said. “I think some of the militarization that people talk about is a little bit of people playing out a fantasy of what it’s like to be in the military.”

But for others, the issue is less about individual police officers who are military veterans and more about a system geared toward giving them an advantage in the hiring process, which can make it difficult for police agencies to create the right mix of skills.

In Washington state, military veterans are given an extra 5 percentage points on their civil service exams — 10 points if they’ve seen combat — giving them a leg up over nonmilitary colleagues. Since 2013 — the earliest year for which data on “preference points” is easily accessible in Seattle — 140 of 691 SPD hires received veteran preference, according to data provided to Crosscut.

“It was an impediment in our attempts to diversify our police services,” said former Seattle Police Chief Kathleen O’Toole. “I have no trouble whatsoever with some type of acknowledgement, whether it's a couple of points on a test or something like that, but any type of absolute preference in any category undermines your attempts to create the most diverse candidate pool.”

O’Toole, who has close family ties to many veterans, was careful to say she respected the skills and experience of military veterans. But, she added, “fighting wars and policing in our communities are very different responsibilities,” and there has to be acknowledgment that military experience does not guarantee a quality police officer.

Rosa Brooks, the Scott K. Ginsburg professor of law and policy at the Georgetown University Law Center, said some military training may, in fact, do a better job of teaching recruits when not to shoot than police training.

“There are aspects of what the military does that, frankly, would probably improve policing, like a much more professionalized approach to training,” she said.

But like O’Toole, Brooks said any sort of systemic advantage risks skewing the makeup of police departments. And although there’s only “weak evidence” on many fronts that the demographics of a police force changes outcomes, there is strong evidence that women officers use force less often and receive fewer citizen complaints than their male counterparts. Because the military is overwhelmingly male, preference risks baking in a male bias.

“In a sort of individualized way, it's perfectly appropriate for a department to say, ‘Wow, Joe Shmoe is a particularly attractive candidate to us because he held these positions of responsibility in the military and had this particular type of training,’ ” Brooks said. “But I think my gut reaction is that the across-the-board veterans preferences is not a particularly good idea in any setting, partly because of the gender impact I mentioned.”

Before the COVID-19 economic crisis and recent discussions about defunding the police, Seattle was on a desperate hunt to add new officers to its police force, which had stagnated and even shrunk in recent years. Part of that meant recruiting veterans. In 2019, 24 out of 161 recruiting events were tailored specifically toward veterans, according to Kelsey Nyland with Mayor Jenny Durkan’s office.

Because giving veterans a preference is a state-level mandate, Seattle has no authority to amend the advantage given to veterans. As a counterbalance, the city has sought to expand other forms of preference, including for language and social work skills.

But the impact of those advantages has been muted. In 2019, just four recruits received extra points for language skills — for Russian, German, French and Spanish. And proposed extra advantages for Peace Corps service and other soft skills have not yet been rolled out.

When people refer to a “militarized police force,” they generally mean equipment and the images of heavily armed police, said Hickman of Seattle University.

“The militarization of police is generally about, why do we have SWAT teams and why do we have police driving around in tanks,” he said. As for veterans coming into law enforcement, Hickman said it’s not a direct pipeline; there’s still a screening process and subsequent training.

The training academy's Rahr is nationally known for pushing a form of training that emphasizes being a “guardian, not a warrior.” She recalled that as she was first rolling out the philosophy, the leader of one of her first class of recruits was a combat veteran. Rahr said she approached him cautiously to explain.

“He very calmly said to me,” Rahr recalled, “ ‘Ma’am if I wanted to stay a warrior I would have stayed in the military.’ ”

by / August 4
Inside Crosscut

Our new state government reporter hopes to represent you — the reader

With 14 years of political reporting under his belt, Joseph O'Sullivan plans to investigate the forces shaping WA government and hold the powerful accountable.