If police are defunded, Seattle firefighters could face a new reality

City council members and community groups are pushing for a third way to help people in crisis, which may involve some firefighters. 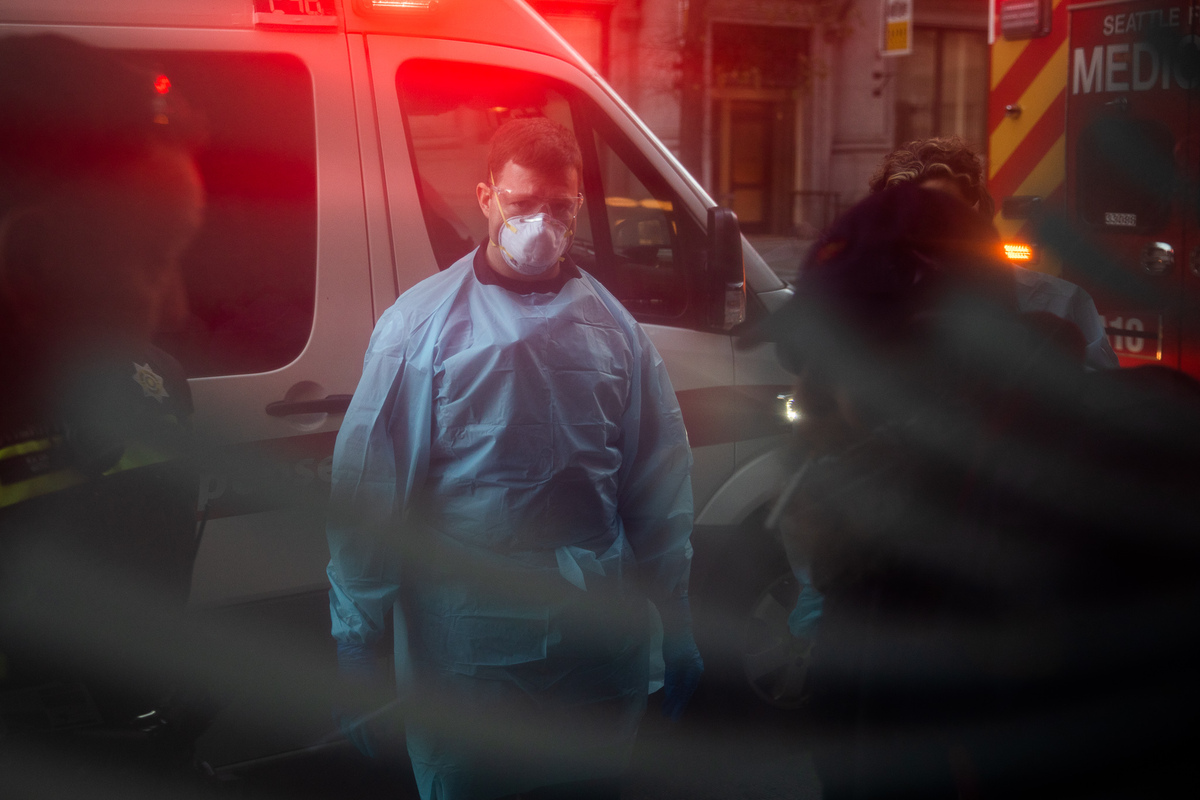 In the early hours of Saturday, June 20, volunteer medics called 911 to inform dispatchers of a shooting in the Black Lives Matter protest zone known as CHOP. “We need an ambulance. He needs to go to the hospital,” one caller can be heard telling a dispatcher a little before 2:30 a.m.

For the next 20 minutes, a series of callers implored 911 dispatchers to help transport the victim. “He’s bleeding out on the table,” one caller said. “We’ll be there as soon as we can,” the dispatcher responded.

But dispatchers also made clear fire officials would not venture into the CHOP without a police presence. Instead, volunteer medics would have to carry the patient a block away to meet the ambulance. One caller said she feared the patient would die by the time they reached the intersection the dispatcher had specified. “They need to be there,” the caller implored the dispatcher, referring to the Seattle Fire Department and its transport of the victim to the hospital. “Promise me," she said. "If you don't get him there he will die.” In the end, volunteers raced the patient to Harborview Medical Center themselves; the 19-year-old —Horace Lorenzo Anderson —was pronounced dead soon afterward. A second shooting that night played out in much the same way though that victim survived.

When asked why the Seattle Fire Department had not picked up the shooting victims at the designated area just outside of CHOP — despite dispatchers' instructions — a spokesperson said firefighters also needed clearance from police to meet the patients there, which they never received.

At a time when the national conversation about race and Black lives has revolved largely around police brutality, the shootings in the protest zone have also raised questions about the way fire departments work with law enforcement.

The local firefighters union has pushed back on criticism of the department’s failure to respond to late night emergencies inside the CHOP, or the Capitol Hill Organized Protest zone. In a statement a few days after the shootings, Seattle Fire Fighters Union IAFF Local 27 said “policy requires firefighters and paramedics to stand by two blocks away from the incident and not enter [the protest zone] until notified to do so by law enforcement, for any and all scenes of violence responses.”

Kenny Stuart, president of the Seattle firefighters union, said the point of waiting for police is to ensure the response to an emergency doesn’t become “one of taking care of a firefighter rather than addressing the incident.” The union noted in the statement that police had been unable to secure the CHOP area.

“In addition, people from the ‘CHOP’ approached fire engines with semiautomatic rifles demanding that the firefighters go immediately into the ‘CHOP,’ however firefighters appropriately adhered to policy and waited for [the Seattle Police Department] to declare the scene ‘secure,’ ” the union said. Volunteer medics said one of them walked to a nearby fire station to personally ask for help.

People calling for defunding the police have advocated taking a closer look at emergency services, including those involving the fire department and a program called Health One, which provides social services.

Experts say the training of firefighters in emergency medical services, or EMS, began as a response to the Korean and Vietnam wars. Reaching war victims in the field proved to be lifesaving, so the idea was to improve prehospital care in everyday life. Because fire stations were already well positioned in various cities and states around the country and within easy reach of patients needing medical care, firefighters seemed best equipped for this work.

Although firefighters are trained to try to save victims before reaching the hospital, the Seattle Fire Department said every training program in the country teaches that when a situation has the potential to be violent, police should respond first.

Data shows firefighters must wait for police to secure an area in only a small number of scenarios. In 2019, Seattle firefighters responded to nearly 92,000 calls, the Seattle Fire Department said. Only a few hundred of those were considered violent situations. So far in 2020, there have been 157 calls where the scenes of violence policy would apply.

But Daniel Malone, executive director of the Downtown Emergency Service Center, who helps run a Mobile Crisis Team in King County, said he’s witnessed the Seattle Fire Department overrely on police and call them when it’s not necessary.

“It brings police to situations where police aren’t needed,” Malone said. “The situation appears much more chaotic than it is.”

In 2019, Mayor Jenny Durkan, Fire Chief Harold Scoggins and Councilmember Sally Bagshaw announced that firefighters would partner with a social worker for the Health One program to respond to nonemergency 911 calls, such as incidents of substance abuse and other situations, including some involving homeless individuals.

But the Health One program has only one unit staffed by three people. Even with that limitation, since its launch last May, Health One has responded to more than 600 calls, the Seattle Fire Department said. Although Durkan originally proposed investing an additional $400,000 for the program this year, that money has been put on hold because of  budget constraints brought on by the COVID-19 pandemic.

Groups such as King County Equity Now and Decriminalize Seattle, which are at the forefront of advocating for defunding the police, have also called for alternative community-led health and safety systems that are representative of the communities they serve.

If the Health One program were to expand, it would not necessarily be representative of all communities. Data provided by the department shows only about 5% of Seattle firefighters are Latino, 5% are Black and 5% are Asian. Seattle’s population as a whole is about 7% Latino, 7% Black and 15% Asian, according to the U.S. census, though a disproportionate number are stopped by police without good reason.

Still, some of the Seattle City Council members who say they agree with the demands to defund the police also say they support Health One. Councilmember Teresa Mosqueda said she plans to seek more money for the program, which currently operates with a $460,000 budget.

“This is a program I fully support and want to see staffed up,” Mosqueda said in a text message.

Councilmember Andrew Lewis, who has advocated for creating a new mental health and substance addiction first-responder program, said he also supports Health One.

Lewis said he believes Eugene, Oregon’s Crisis Assistance Helping Out On the Streets, or CAHOOTS, program could serve as a good model for Seattle because it reduces caseloads for police. The nonprofit program handles about 20% of 911 calls and has personnel trained in counseling and medical care who intervene before officers are ever needed.

But 911 dispatchers need a number of options at their disposal, and Health One should continue to be one of them, Lewis said. The distinction is Health One is often called after police have already arrived on the scene.

“Health One might be good at some things, might not be good for other things. Let’s have a conversation about that range,” Lewis said, explaining he would want to discuss any support for the program with community groups.

By creating various options, reducing the number of police officers suddenly starts to make more sense, Lewis said. The city should also invest in programs such as Choose 180 and Community Passageways. Both aim to disrupt the school-to-prison pipeline, so that there would be less need for emergency services in the first place, Lewis argued.

Angélica Cházaro, an activist and assistant professor at the University of Washington School of Law and a member of Decriminalize Seattle, said Health One could “be just one leg of the stool” but that “it’s not going to replace the need for community-led solutions.” Cházaro also said who decides which 911 calls get referred to Health One is important. Decriminalize Seattle wants the city’s 911 system to move out of the police department’s control.

While negotiations over the city budget and defunding police continue, the Seattle firefighters union has attempted to tread a fine line. In a statement, the union said it supports “the call for racial justice, economic equality and systemic change in our institutions and organizations,” but it also said it is “very troubled by the consequences of reducing or eliminating the ability of police to protect people and respond to violent crime.”

“We know that Black communities have long experienced structural discrimination that results in poverty, segregation, marginalization, inequity and violence,” the union said. But firefighters “favor a responsible and balanced approach to change.”

Stuart, the union president, said he finds it difficult to imagine who else might help the department respond to violent emergencies.

“If you don't have police, you're going to have the state patrol or the National Guard,” Stuart said in a recent interview.