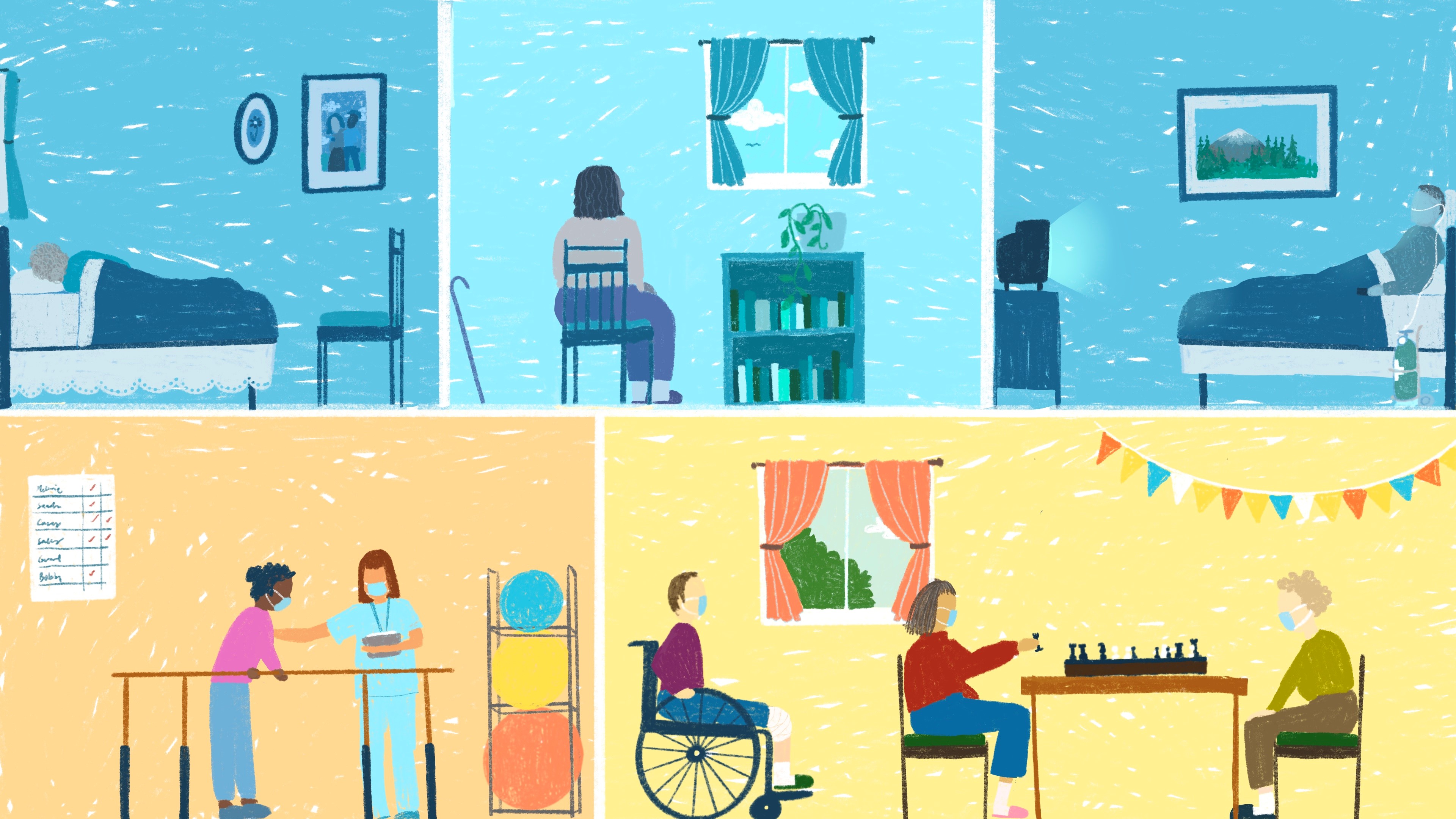 Three years ago, I woke up from a dreamless void in a hospital recovery room. Disoriented, I tried to stand up, but a nurse quickly calmed me.

Then I remembered why I was there. I looked at the bandaged stump below my right knee, where a diseased foot and ankle had been hours before. My bones had been crumbling for months, the surrounding skin ulcerous, consequences of long-term diabetes. I thought about how a whole hunk of me was now in an incinerator somewhere.

In the hazy days that followed, I faced a physical world that was suddenly a challenge. Every move of mine became a complex objective involving risk, anxiety and comic self-awareness. I fell sometimes. It was clear I could not simply go home and resume the ordinary.

I transferred to a skilled nursing facility in Shoreline for the next three months. I was feeling good, free of toxins from my diseased leg, and full of iron-rich donor blood. I had a spiffy wheelchair and was aglow with life-affirming optimism, a clear head and hope.

The food at the place was horrible, but there was physical therapy, a small library and nodding fellowship with other short-term patients. My room was on the ground floor, tucked into a corner off a long, wide hallway. I liked my solitude. As summer neared, I steered myself outdoors for secluded, drowsy reveries.

In time, I realized there was another world above me, a second floor where a different population lived: nursing home residents who were there for good. Aside from brief outings, these patients would never leave the facility except if headed to a hospital, hospice care or a funeral home.

I met some of these folks when they came downstairs for morale-building social events — music performances, games, a Fourth of July barbecue. I enjoyed their company, these seniors who had lived full lives and had stories to tell.

Eventually I rode an elevator up to visit their community, to get a few smiles and conversation. The layout of the second floor included a large space painted in a lively blue and green design, a room meant for birthday parties and the like. It was also where residents convened for meetings of self-governance. These adults might have seen their old worlds radically reduced to new confines, but they had not forsaken their independence, life experience or wisdom.

Such communal activities in nursing homes have been barred, along with visitors, since the Centers for Medicare and Medicaid Services issued strict guidelines in March. I think about those men and women upstairs now — especially as the number of cases continues to rise — and wonder how they’ve fared during the COVID-19 pandemic, living in such dangerously close quarters.

The late-February outbreak at the Life Care Center in Kirkland showed the nation just how rapidly coronavirus can spread, with 129 cases and 34 dead as of March 23 (the date of King County’s final report on Life Care). Since then, the virus has swept through nursing homes across the country. A New York Times database from June 26 revealed that the coronavirus has infected 282,000 patients at 12,000 nursing facilities across the U.S., claiming 54,000 lives. That’s 43% of all COVID-19 deaths in America. Yet this group represents only 1% of the population.

On June 22, Washington’s Department of Social and Health Services reported the total number of COVID-19 cases in the state’s long-term care facilities as 4,376 (15% of all cases in the state), including 779 deaths (61%). A June 29 DSHS chart showed a cumulative tally of 414 nursing and assisted living facilities with confirmed cases since the pandemic began. Of those, 164 have reported current cases, and 41 other facilities are suspected to have them. (In a phone call, an administrator at the skilled nursing center where I stayed said its lone coronavirus patient has recovered.)

The fact that patients in these places are sequestered away from mainstream life makes such devastation abstract. Grim reports of nursing homes piling dead bodies into refrigerator trucks can’t quite penetrate incredulity. Unless you know someone housed in a facility, victims seem remote and faceless.

I don’t know if any of the second-floor friends I made during my rehabilitation are still with us. I was released, they stayed, we didn’t keep in touch. But my brief time among them reminds me there are complex lives — chiaroscuros of love, integrity, humor, disappointment, joy, ambition, defeat and wonder — behind the numbers.

I met Shirley when she rolled up in her powered wheelchair at a waffle brunch. The activities director, a very kind young man named Jon, had set up a dozen or so small tables so four or five people could squeeze around each, all but mandating conversation (All names have been changed for privacy reasons.)

Shirley, nearly inert from terrible swelling in her torso and limbs, was convivial and warm. She offered relaxed, bemused commentary about the hurly-burly at the brunch’s buffet line and the antics of a visiting golden retriever on the center’s sun-dappled patio.

She said she had been a nurse before retirement because the profession gave her a structured, sane path out of her formative years, in which the line between right and wrong hadn’t existed. Shirley had raised a daughter alone, and now had a fine son-in-law and young grandson. Her days were spent trying to rise above a dispiriting medical regimen, saving her best for sowing and harvesting love within her family.

On another day, I rode the elevator up, and happened upon Hal. Inching his way out of his room, his walker clawing at the carpet with the kind of measured progress taught in physical therapy, Hal was engaging in one of two prescribed daily walks. He wasn’t going far, but the activity got him away from NASCAR races blaring from his television.

Hal enjoyed watching those races for the suspense of the chase, but even more for glimpses of pit crews in rapid motion, and what one could glean about team dynamics. After a while, I gathered Hal was interested generally in all such human endeavors requiring clockwork efficiency.

A widower with a few grown grandchildren, he had retired from sales and indulged his love for oil painting and driving his Mustang. He spent a few years traveling solo on the art fair circuit in Oregon and Washington, selling landscapes. He no longer painted, but drew sketches from memory of people and places in his life, echoes and shadows.

I recall, too, Victor, a rangy fellow with the look of a deposed king. At least that was my first impression, and it didn’t stop there. I was sure the naturally imposing Victor had been in command of something throughout his adult life; had kept a fire of independence burning, hadn’t suffered fools and imposed high standards.

When his kids and grandkids visited en masse, he sat among them with warmth but also a brooding resignation. One day I caught him playing piano for some of the other residents, performing pleasant turns on American standards. Something about the scene softened him.

When I finally struck up a conversation with him one afternoon, what emerged was that Victor had, in fact, built a small business from the ground up. Its success nurtured a bountiful family life with the means to launch his kids down their own branches of the river. When the time was right, he was planning to write new chapters for himself while there was still time.

But ill health changed everything, and Victor’s adjustment to reality was achingly slow. I hope he did not give up, that he found a way to still see possibilities.

Physicists tell us the arrangement between matter and energy is that the former is a perfect vehicle for disseminating the latter into endless new forms. That’s what my friends on the floor above me did in life; it’s what we all do. We disseminate like crazy while we’re here, but the ultimate price for the adventure is entropy, a gradual breakdown and release. Seen as part of the way of the universe, our short lives might end abruptly or grind painfully to a halt, but we are not alone in the grand process.

Over time, I’ve come to see the destruction and loss of my limb, while a consequence of poor health choices, as part of the arc toward decline that none of us can escape.

How we accommodate and honor that inevitability for one another, including for those whose final acts are set in nursing homes, is of importance to how we live. The tragedy of the pandemic’s cruel hit on these living spaces is not only the loss of life, but our uncomprehending distance from those dead.