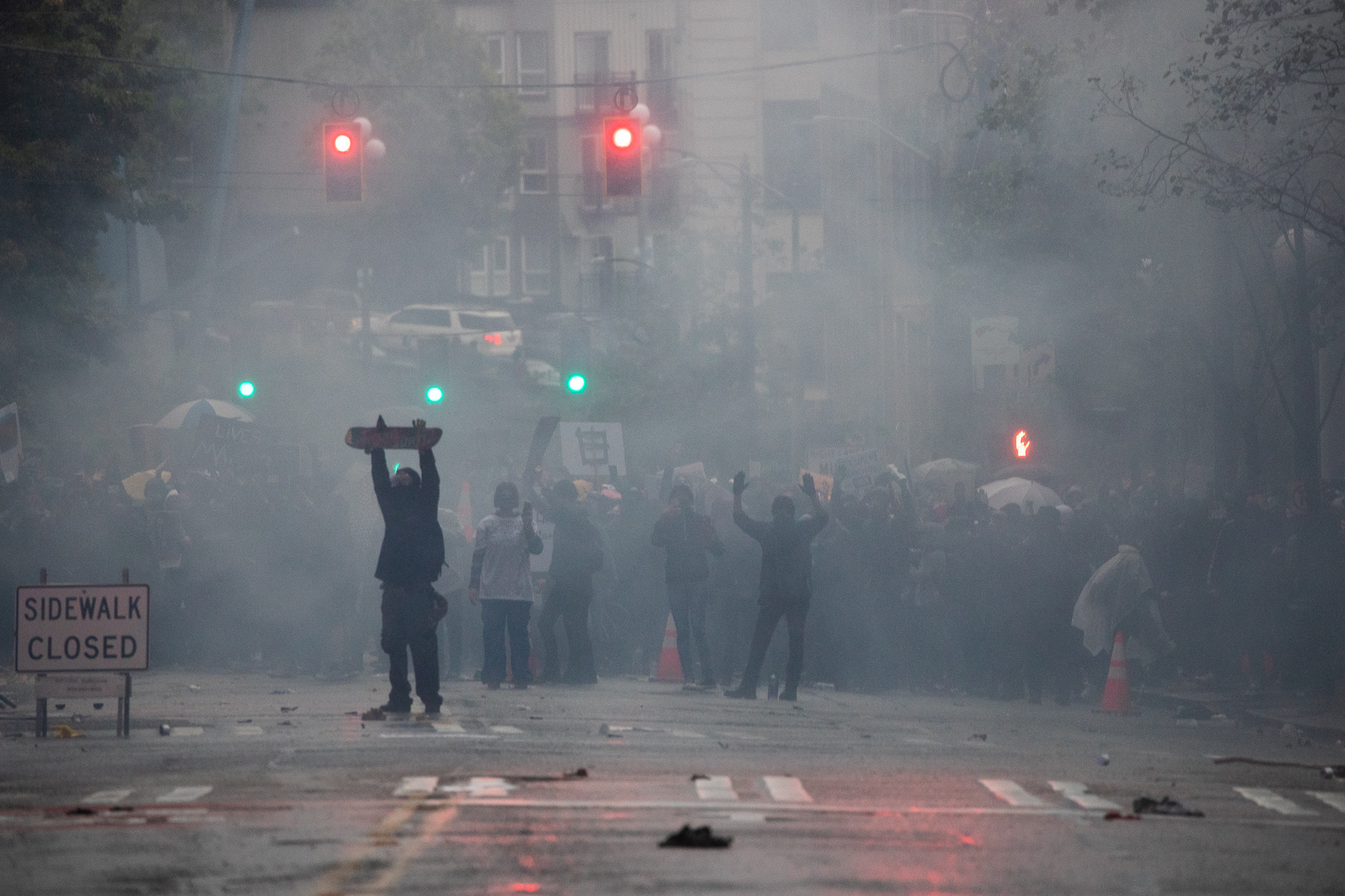 Demonstrators stand amid a cloud of tear gas during protests across downtown Seattle, May 30, 2020. A wave of protests has swept across the U.S. following the death of Floyd. (Matt M. McKnight/Crosscut)

A federal judge late Friday halted the implementation of a Seattle ban on police use of tear gas, pepper spray and other so-called less lethal weapons used for crowd control. His decision gives more latitude to law enforcement to use the tools ahead of what could be a weekend of protests, as federal agents arrive in Seattle with the stated orders of protecting federal property.

A separate court injunction against use of the crowd control weapons remains in place, although that order allows for their targeted and limited deployment in certain circumstances.

U.S. District Judge James Robart issued a temporary restraining order during an emergency hearing Friday night. The order was in response to a motion filed by the U.S. Department of Justice as part of an ongoing agreement between the federal government and the city of Seattle to overhaul the Seattle Police Department.

The DOJ argued that implementing a ban on tear gas and other crowd control weapons, which the Seattle City Council passed in June, would result in “irreparable harm resulting from officer confusion and the inability to modulate force or de-escalate situations in which force may be needed.”

Robart agreed, at least until the changes to crowd control tactics undergo further review by the various police accountability agencies in Seattle.

"The issuance of this immediate change, without time for additional direction or training, is likely to result in officer confusion," he wrote.

His order will last 14 days.

In response to Robart's ruling, Seattle Police Chief Carmen Best said on Saturday that officers would carry pepper spray and blast balls while responding to protests over the weekend. But, she said, "SPD promises the community that we will not deploy CS (tear) gas."

The legal path that led to Robart’s ruling and the conflicting politics is head-spinning.

Seattle and the Justice Department have been bound together for close to a decade after the DOJ threatened to sue the city over what it found was excessive use of force by its police department. Instead, the city agreed to work together to overhaul policing in the city, an agreement that continues today.

In its filing Friday, the DOJ argued that implementing the ban on crowd control weapons would not only create more harm to officers and the public, but that it was also an abrogation of that agreement, known as a consent decree.

“There is a serious question regarding whether the removal of these less lethal options (in particular without additional guidance or training to officers) is in violation of the Consent Decree’s provisions,” the DOJ’s filing said.

The Seattle City Council passed the ban on crowd control weapons after extensive clashes between police and protesters in the wake of George Floyd’s killing in Minneapolis. It was set to take effect this Sunday.

While the Seattle City Council passed the ban, Mayor Jenny Durkan and Chief Best opposed its implementation. They argued it would forces officers into using more primitive tools.

“As City Council’s legislation goes into effect, it will create even more dangerous circumstances for our officers to intervene using what they have left — riot shields and riot batons,” Best wrote earlier on Friday.

Nevertheless, despite her opposition, Best was set to comply with the council's ban. She told officers on Thursday that they would no longer be allowed to use tear gas, pepper spray or blast balls.

The DOJ, however, sought to block Best's order from taking effect — creating the strange scenario in which the subject of the restraining order agrees with the principles of the order against her.

To further confuse matters, the attorneys tasked with defending the City Council’s ban also represent the voices of those in Seattle City Hall who opposed that same ban. Just days earlier, the City Attorney's Office had offered Robart arguments on behalf of Best and Durkan for why the ban should not take effect, which he rejected.

Seattle City Attorney Pete Holmes explained the disconnect as an obligation to represent multiple, sometimes competing, parts of the city. “I have a validly enacted ordinance,” he told Robart. “I have a duty to defend it.”

But Robart wasn’t buying it, accusing the city of saying, “I want to eat my cake and have it, too.”

David Perez, an attorney for the Seattle Community Police Commission, a civilian police advisory council, gave a more impassioned defense of the ban. He described the scene on Capitol Hill earlier in the summer as similar to Mosul during the Iraq war.

A separate injunction against crowd control weapons, issued in June by U.S. District Judge Richard Jones, remains in place. However, that injunction still allowed the weapons to be used in certain scenarios in a targeted way. Seattle police have indeed used blast balls and other less lethal weapons since that injunction was passed down.

In a statement Saturday morning, Stephanie Formas, chief of staff for Durkan, said the mayor supported a review of any changes to crowd control tactics. The mayor had called for such a review before the City Council passed its new ban.

"The Mayor believes changes do need to be made to SPD’s crowd management practices, policies and training," Formas said. "As the Mayor has stated, she believed that SPD’s actions during some of the protest activities did not reflect the court approved policies requiring de-escalation and proportionate force."

The weight of Friday's ruling is significant. The Department of Homeland Security confirmed it has sent federal agents to Seattle with orders to protect federal property, conjuring fears that Seattle could mirror the chaotic scene in Portland. Gov. Jay Inslee, Mayor Jenny Durkan and a host of other local elected officials have warned that such a deployment could escalate tensions in the city.

Speaking at a press conference Friday, Durkan urged calm and pleaded with protestors to remain peaceful.

Earlier this week, U.S. Customs and Border Protection officials confirmed the presence of additional federal law enforcement officers in Seattle earlier this month to protect federal buildings and monuments, but both the mayor and the governor were unaware they had been sent to Washington.