With time outside of jail cells greatly restricted, pandemic safety has led to solitary-like conditions. 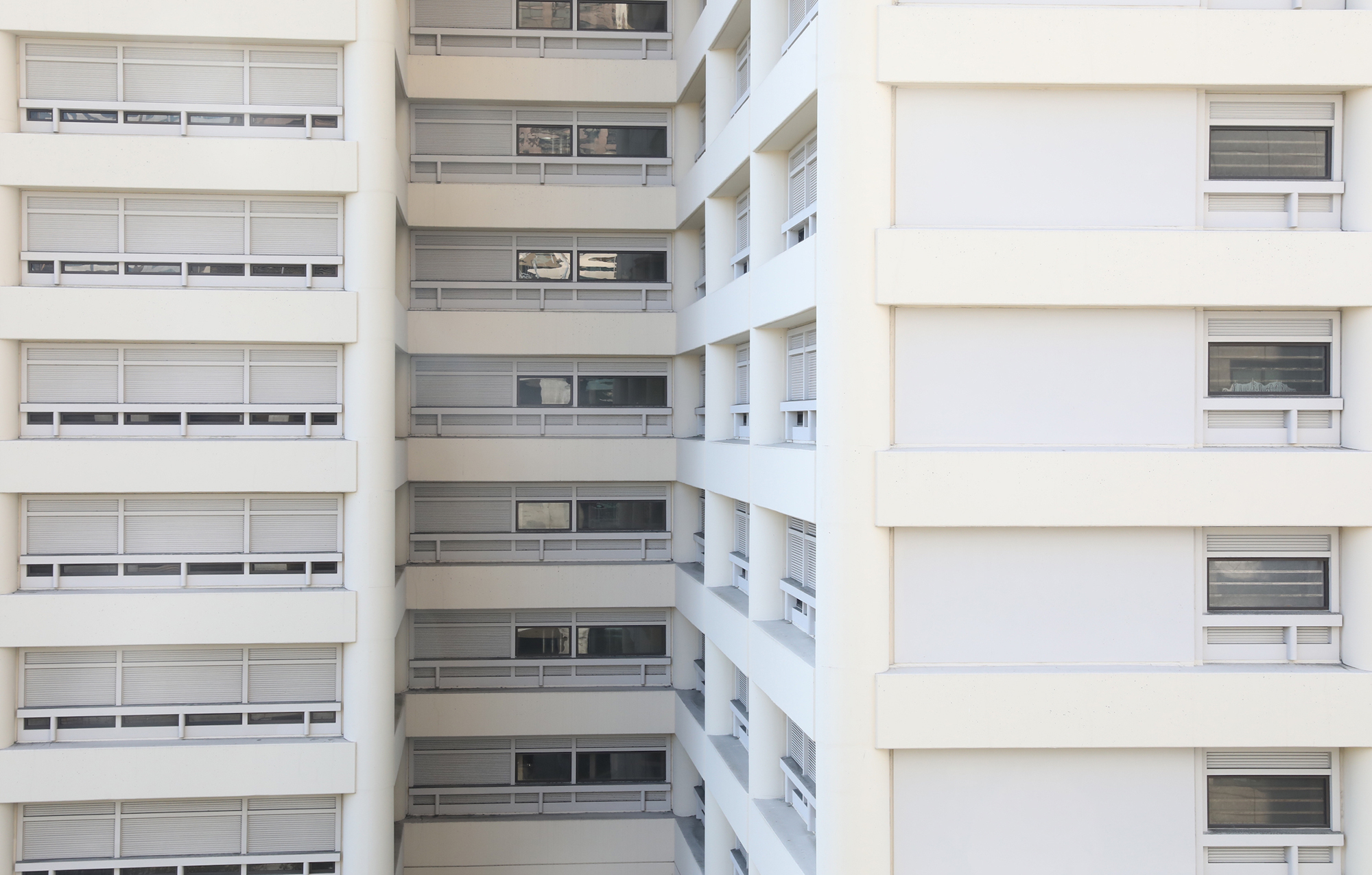 From his jail cell in downtown Seattle, Zeke Hoskins can see the highway below and the people driving by, all moving on to somewhere else. As he sometimes spends up to 23 hours in this small room, Hoskins passes his days by looking out the window, watching cars.

Hoskins has lived in this cell for more than two months. He is being held on $200,000 bail for a charge of second-degree assault, stemming from a family fight (a judge recently reduced his bail to $50,000). It’s a small space, with a white stool and a desk. “If I were to lean 2 inches over, I could touch wall to wall,” he said by phone from inside the pretrial facility.

He’s alone. A majority of inmates are alone right now, according to defense attorneys with clients in the King County Correctional Facility. It’s part of the facility’s pandemic-related efforts to create space inside a building that was designed to use space sparingly. Fewer inmates are allowed out of their rooms at a time; education programs have been slimmed; recreation time is down.

The result is that, within the jail, the term “social distancing” takes on a weightier meaning than in the outside world. It’s not quite solitary confinement, but attorneys say their clients are routinely spending 22 hours a day or more alone in their rooms.

On a good day, Hoskins said, he may get four hours out of his cell. But good days come along maybe once a week, he said, and the average is closer to two hours. On a bad day, when an inspection is called or a guard finds something he doesn’t like, the time can slip down to just an hour.

Jails, with their cramped spaces and frequent turnover, present an extreme risk for spreading the coronavirus that causes COVID-19. In King County and elsewhere, officials have worked to lower the overall jail population in order to reduce the risk.

Attorneys and civil rights advocates worry that increased social distancing measures in incarceration are creating an epidemic of their own.

“The widespread use of solitary confinement trades one serious harm, which is the risk of COVID, for another, which is solitary confinement,” said Ethan Frenchman, an attorney with Disability Rights Washington. “The psychological effects are really profound, even for people without preexisting conditions.”

As it’s done with a slew of systems in the U.S., COVID-19 has taken what many believe was already a problematic institution — overcrowded jails — and forced a reckoning. Access to the jail is limited; defense attorneys say their clients’ moods have worsened.

“Increased suicidal thoughts, desperation,” Kate Aitken, an attorney with the King County Department of Public Defense, said of her clients’ symptoms. “It’s just really unhealthy to be so isolated and so locked up for a lot of the time.”

Noah Haglund, a spokesperson for the jail, acknowledged that COVID-19 has forced a reduction in programming outside of cells and led staff to stagger inmates’ time in day rooms or recreation areas. Haglund said the staff is offering more learning packets, as well as access to board games, puzzles, movies and more.

“Group programs continue to not be feasible, as multipurpose rooms at King County detention facilities do not provide sufficient space for social distancing,” said Haglund.

But tinkering falls short, said Frenchman. “I think there’s some concern that it’s impossible to make prisons and jail safe in a public health emergency,” he said.

Limiting social interactions to slow the spread of COVID-19 in jails has raised the hackles of civil rights advocates across the country. A recent report titled “Solitary Confinement is Never the Answer” from a group of advocacy organizations, including the American Civil Liberties Union, estimated that COVID-19 has led to a 500% increase in solitary-like conditions in jail and prisons nationwide.

Before the COVID-19 pandemic, the jail population in King County hovered around 1,900 people. Since the virus began its spread, that population has dropped to around 1,300 in an attempt to create more space between inmates.

To achieve the reduction, very few people are being held on misdemeanor charges and the Washington Supreme Court has encouraged lower court judges to consider health concerns — such as whether a defendant is particularly vulnerable to the virus — when deciding whether they should be held in jail while waiting on their case to move forward.

Although the drop in the jail population is notable, it has stayed stagnant in recent months. The roughly 30% decrease is also smaller than in other counties, including Yakima, which has decreased its jail population by nearly 50%, according to a database kept by the Vera Institute of Justice.

And lately, said Aitken, she’s noticed that courtrooms are trending back toward what was normal before the pandemic, and judges are more willing to incarcerate people.

So far, the jail has conducted 280 coronavirus tests, 11 of which have come back positive.

The options for creating space in a jail are limited, a fact Hoskins’ defense attorney, Nacim Bouchtia, acknowledges.

“If I was in charge of the jail and you told me, ‘Hey, we need social distance,’ I would just look at you and say what ... do you expect me to do?” he said. “This whole building is designed from the ground up to be economical with regard to how much space it uses up per person.”

The consensus for a solution among defense attorneys and justice advocates lies further upstream: a steeper reduction in jail population, which is up to prosecutors and judges.

Jaime Hawk of the ACLU of Washington agreed. “That’s really the only main thing we can do: the more people are released, the more social distancing is allowed, and the use of solitary will be curbed in that way,” she said.

Among judges and prosecutors, however, that’s caused concern. In a letter earlier in the pandemic, King County Superior Court Judge James Rogers called the efforts already undertaken to reduce the jail population “unprecedented,” but cautioned against further declines.

“Superior Court Judges are painfully aware of both the health crisis and the danger we are causing in some release decisions,” he wrote in response to a call from King County Councilmember Girmay Zahilay to reduce the number of people charged with felonies in jail. Rogers called it “unlawful and unwise” to release “mass groups of people through a single order” and said if Zahilay and other elected officials wanted more out-of-jail options, they needed to fund them.

Casey McNerthney, spokesperson for the King County Prosecuting Attorney's Office, said staff there reviews each case individually, including past compliance with court orders, and identifies people who might be eligible for "less restrictive" alternatives to jail.

But, McNerthney said, the office deals with very serious crimes every day.

"In any case where we ask a judge to hold someone in jail, we’ll be accountable for that decision and show our reasoning in public court documents," he said. "And ultimately the decision to keep someone in the King County Jail is up to a judge."

Hoskins, the man in the Seattle jail, first started getting high in the fifth grade, using a mixture of cocaine and methamphetamines. As he grew older, he became homeless, living in a tent.

Over the past two years, things had started to steady out. He stopped using drugs and worked for a temp agency.

“He really changed his life around and was doing the right thing,” said his uncle, Earnest Hoskins. So for Earnest, his heart broke when his nephew was arrested again after a fight involving his mother’s partner.

His bail was initially set at $200,000. After hearing from an advocate of Hoskins earlier this month, from the YMCA’s Alive and Free program, a judge agreed to reduce that to $50,000.

But it’s still too much for his family to afford and Hoskins remains in jail.

Frenchman of Disability Rights Washington said it’s impossible to separate the county’s COVID-19 measures from other issues in the criminal legal system, bail reform in particular.

“The judge made the determination that he could be released if he were richer,” said Frenchman, who is not familiar with the specifics of Hoskins’ case.

Attorneys also worry that increased isolation will add pressure on defendants to plead guilty, especially as their pretrial jail stays lengthen. Bouchtia said he’s had clients he knew were innocent accept a plea deal that allows them to leave the jail and go home. The layers of additional stress during a pandemic — loneliness and fear of catching the coronavirus — could make that option look even more appealing.

In the months since quarantine measures have upended normal life, feeling trapped or isolated is commonplace. Now imagine the remaining tethers to the rest of the world are stripped away, said Emily Elijah, an attorney with the Department of Public Defense.

“We’re all staying home, self-isolating, going on walks, going outside more, connecting with people virtually, watching TV,” she said. “The only way for an institution like a jail to self-isolate is to reduce the number of people in a tank and keep them locked in.”

Hoskins said he hasn’t had a good night’s sleep since he entered the jail. It’s noisy inside and he has no control over the lights. The best he can do is drape a towel over his eyes and nap through the evening and the day. He feels a mix of emotions: neglect, sadness, fear.

But what gets to him most is feeling like he’s in the dark about his future.

“Just waiting in general and not knowing what’s going to happen in the situation,” he said, “it’ll drive you nuts.”