‘People are coming. They’re here. So how do we keep everybody safe? Because we don’t even have a hospital here.’ 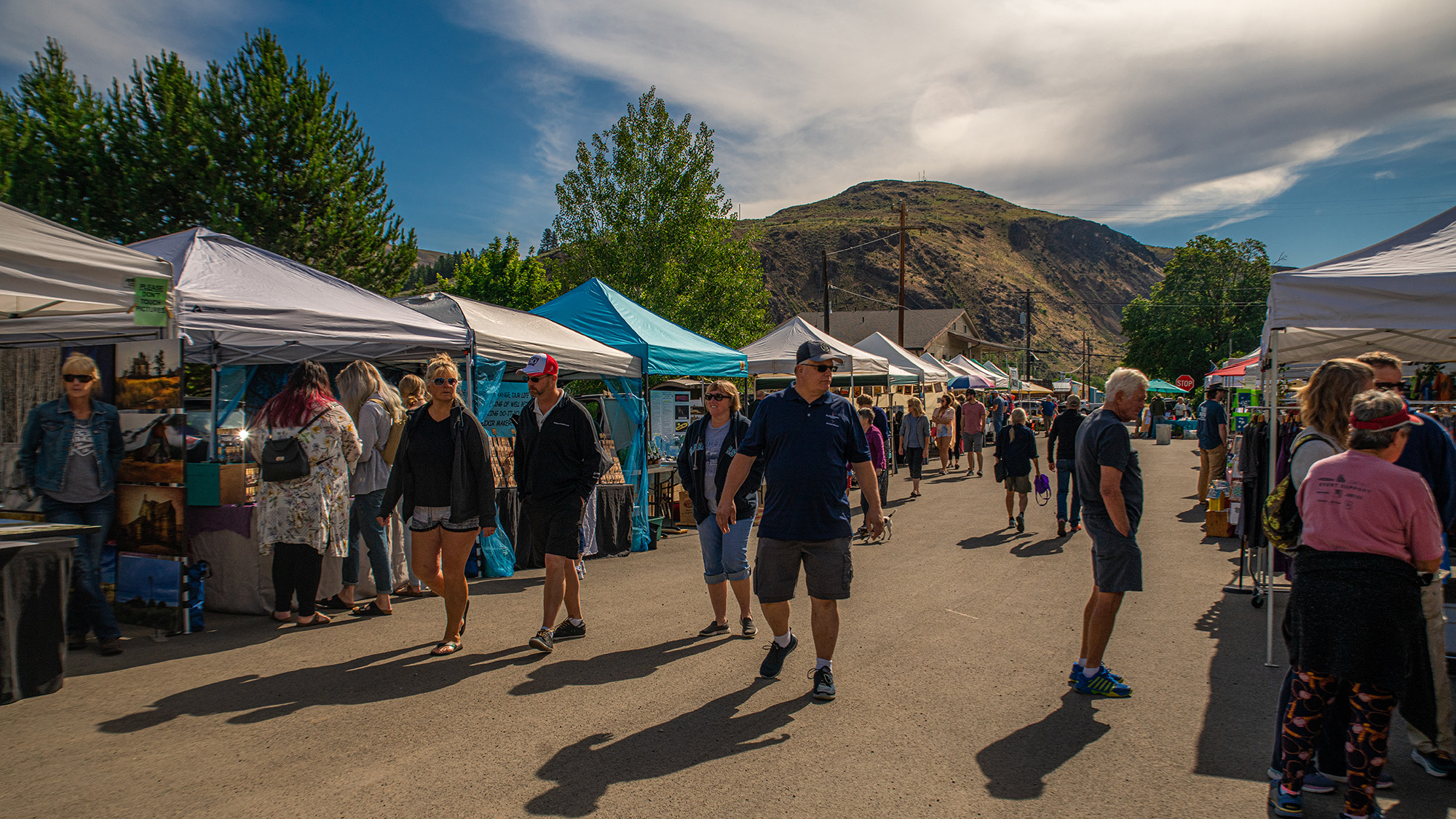 The Methow Valley Farmers Market in the Okanogan County town of Twisp, in 2019. Because of COVID-19, patrons of the market, which runs from April to October, are expected to wear a mask and socially distance this year, according to Jamie Petitto, marketing director of the Twisp Chamber of Commerce, and locals started the first ever online shopping for their farmers. (Twisp Chamber of Commerce)

John Bonica had the second confirmed case of COVID-19 in Okanogan County. At the end of March, after about 10 days of body aches, fever and chills, he got his test results — positive. Eventually, everyone in his family, except one daughter, contracted the coronavirus.

Bonica, owner of a small Italian restaurant in Twisp, is fairly certain a visitor to town enjoying the end of the ski season gave him COVID-19, as he hadn’t been spending much time socializing outside of work or at home.

Now Bonica, who moved to Twisp, population 958, in 1978, is one of many small business owners in Okanogan County with mixed feelings about the reopening of businesses in the Methow Valley, just as both the coronavirus and the tourist season are heating up.

The Methow Valley in Central Washington is a beautiful stretch of wilderness sprinkled with tiny communities, from Winthrop and Twisp on Highway 20, south to Pateros and Brewster near the Columbia River. Two seasons in the valley are popular with out-of-towners: In winter, tourists and second-home owners from west of the mountains come for skiing. Twisp boasts the Methow Trails, the largest cross-country ski trail system in the U.S. In summer, visitors hike and rock climb, fish on the Columbia and enjoy the small but thriving arts and culture scene.

On June 5, Okanogan County moved into Phase 2 of Gov. Jay Inslee’s “Safe Start” plan. That allowed for reopening of businesses such as retailers, hair and nail salons, and restaurants and bars at up to 50% capacity. During tourist season, Bonica makes as much as 75% of his income from those out-of-towners, who come in droves during winter and summer, numbering half a million annually.

Jamie Petitto, marketing director of the Twisp Chamber of Commerce, said most of the health concerns she hears from small businesses involve the wearing of masks. While asking your regular customer you’ve known for 10 years to mask up is a little easier, Petitto said, it’s those unmasked tourists that worry the businesses.

“I think with tourists, especially traveling during what should be deemed nonessential travel, there’s a concern that if they’re breaking that rule, then they might break other rules of not wearing a mask,” Petitto said. “My biggest thing with regards to tourism and coming in: It’s not that we don’t want tourists here. We just want people to continue to follow guidelines, recommendations.”

Bonica said he’s similarly frustrated with those who aren’t masking up. Even after the governor announced mandatory face-covering requirements, Bonica has had to tell people coming in for takeout food to wear masks, or to step outside and the food can be brought to their vehicle.

“People from the coast come over here and they act irresponsibly because it’s not their back[yard],” Bonica said. “They’re sick and tired of wearing masks. They’re fed up with the government telling them what to do … and we’re actually concerned about our health here.”

The county has had only five hospitalizations and two deaths from COVID-19, with 115 confirmed cases, according to Okanogan County Public Health. But it meets only two of the five state requirements to move to Phase 3, and it also saw its largest increase in cases — 22 — from June 26 to 30.

Bonica’s restaurant closed during Phase 1, but started offering takeout two days a week at the end of April. But even though the county is in Phase 2 and he can reopen at 50% capacity, he is keeping his lobby closed, open only for takeout.

Bonica feels there’s not much conflict when he thinks about business revenue versus safety. He’s a small business owner who works to make money, he said, but if he did go bankrupt? “[Then] I’ve avoided passing disease on to someone who would have died, there’s no question about that.… I’m not willing to sacrifice or risk the health of my neighbors or strangers in order to make a buck.”

The 69-year-old said when he was waking up in the middle of the night with chills, body aches and temperatures of 103, he was thinking, “If I was older or weaker, this might kill me. This is serious.” So he takes the virus seriously.

“I would love to open up the restaurant [lobby], but I'm not going to do that until I'm confident that this thing is under control, and that we all know how to behave around each other, and how to behave responsibly,” Bonica said. “We're kind of in this together. I want to feel a sense of solidarity with everybody who comes through the door. And right now I don't.”

Tensions were much higher in late winter, when state highway workers started clearing the snow from Highway 20 on March 23.

The day before the annual snow removal, resident Patrick Hannigan started an online petition in response to the “influx of nonresidents in the past week who appear to view the valley as a quarantine vacation destination,” saying that influx of visitors “will have disastrous consequences for the Methow Valley."

More than 600 people signed the petition, which called for a halt to marketing efforts encouraging travel to the Methow Valley. They should instead focus on telling people not to come, the petition said, while closing hotels, campgrounds and RV parks, and consider closing the Methow Valley completely to nonresidents.

In a March 25 article in the Methow Valley News, Winthrop Mayor Sally Ranzau said she was getting at least two emails a day in favor of keeping Highway 20 closed. She wanted to open the road across the Cascade Range as an important route for supplies, services and as a medical evacuation route, but agreed to stop marketing efforts aimed at tourism.

Petitto thinks the anti-tourism sentiment has subsided somewhat as people are resigned that the tourist season is going to happen.

“I think that the Methow is no longer in the ‘block anyone out’ phase, it’s more ‘how do we manage now [that] they’re here’ phase,” Petitto said.

And many people are coming in. Petitto said that while nonessential travel is still supposed to be limited in Washington, the RV parks and hotels are full.

Julie Tate-Libby, program director at TwispWorks, a nonprofit that supports small businesses in the Methow Valley, said summer revenue is essential for the valley’s businesses.

Since COVID-19 has erupted in Washington, TwispWorks has helped businesses find and apply for resources like the Paycheck Protection Program, the Economic Injury Disaster Loan program and unemployment compensation. When Washington’s stay-at-home order was announced in March, TwispWorks launched an outreach effort that has reached more than 500 businesses in the valley for one-on-one counseling on COVID-19 relief programs.

Tate-Libby said three-quarters of those businesses think they would shut down within three months if the closures  continued with no financial assistance. She said some businesses were falling through the cracks for federal and state assistance, so TwispWorks was able to partner with a few local organizations and provide 25 $1,500 grants.

Tate-Libby said some think the reopening is political, not unlike in other towns, but most people are following the rules.

“All businesses are feeling the crunch, but I think a lot of businesses are doing a great job at reopening safely,” Tate-Libby said. Many are handing out masks, putting down 6 foot markers for social distancing, and even providing hand washing stations. But she admits that others have not been as COVID-conscious.

“What does the community want? It is so divided. Again, because we’re a tourist-dependent economy … the pass opens and then people [start] coming over, and I think it has been very difficult for everybody in the valley, whatever side you’re on,” Tate-Libby said. “People are coming. They’re here. So how do we keep everybody safe? Because we don’t even have a hospital here.”

An hour south of Twisp is Three Rivers Hospital in Brewster and 45 minutes east is Mid-Valley Hospital in Omak. While Twisp has local medical clinics and Aero Methow, an emergency rescue service, winter conditions can make trips to the hospital difficult.

The Center for Disease Control and Prevention and other leading health organizations have stressed the importance of wearing masks to flatten the curve of COVID-19 cases, keeping transmission rates low and not overwhelming hospitals. The Methow Valley is in a unique position: The half a million outsiders visiting annually far surpasses the county’s population of just over 42,000. This makes for a tenuous relationship with unmasked tourists.