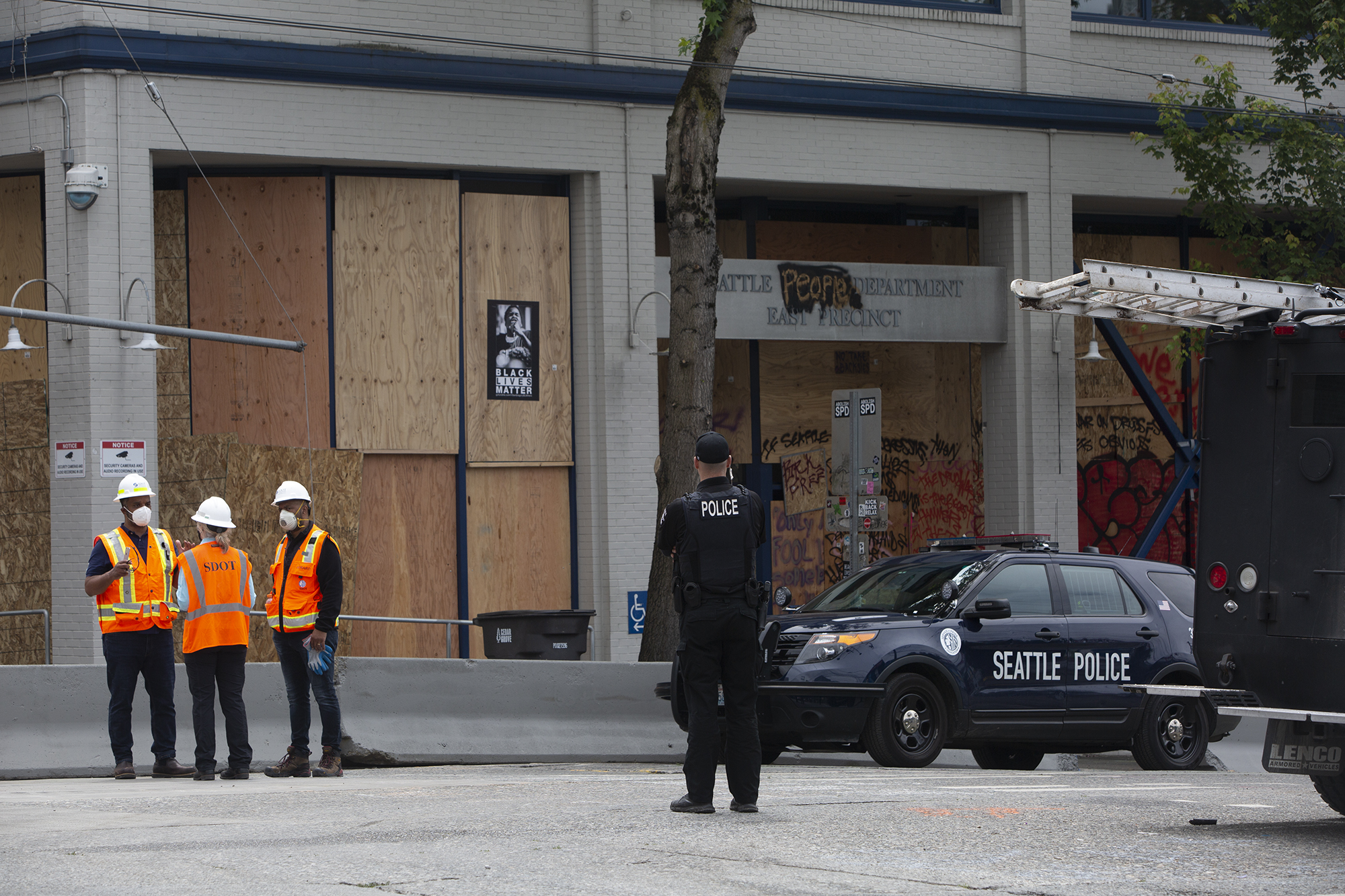 On its surface, it was a simple gesture, even a humane one: An armored police officer, gearing up for a possible confrontation with protesters, affixed a patch to his bulletproof vest. “STOP SCREAMING,” it read. “I’M SCARED TOO.” The Stranger’s Rich Smith captured a photo of the officer last week while police cleared the area known as CHOP, the Capitol Hill Organized Protest zone. The early-morning dismantling, involving dozens and dozens of law enforcement officers who collapsed tents and arrested protesters, occurred after a string of recent shootings took the lives of two Black teenagers, Lorenzo Anderson and Antonio Mays Jr., and injured at least two other bystanders.

In the early days of Seattle’s demonstrations, I paid periodic visits to the site of nightly clashes between demonstrators and law enforcement. I circled the blocks around 11th and 13th avenues and Pike and Pine streets, testing my own fears: of exposure to coronavirus, and to the violence of a possible escalation. I studied the faces of the phalanx of officers guarding the four front lines and the National Guard troops behind them. Some of the troops seemed young; bulky riot gear hung heavy on their small frames. I didn’t see monsters — but I grew up in a version of America where police didn’t see me as a monster, either.

At each barricade a different atmosphere took hold. Sometimes protesters sat peacefully in silence, staring up at the officers who stood above them. On the southern barricade, a young, dark-skinned woman began a conversation with a white male police captain. It was a brave and ultimately doomed attempt at civil discourse. I observed them for 10 minutes before it was drowned out by a chorus of righteous anger and cruel invective. The anger I understood, but the invective grew alarming. More than once I heard insults wishing death upon the men and women in uniform. “Die, motherfuckers!” yelled one white man, a 40-oz. bottle of Old English malt liquor in his hand. Especially chilling was a protester blasting a bullhorn from the front lines of 11th and Pine, calling for the police to take their guns, place them under their chins and pull the trigger.

I can imagine the fear such vitriol inspires. I wish it on no one. Nor would I wish for anyone to be bombarded by projectiles — rocks, water bottles, fireworks, other types of explosives — that police allege have injured officers and sent some to the hospital. It is scary to be threatened with verbal and physical abuse. But the shape and texture of the fear provoked by protesters expressing rage at police, it seems obvious to say, is fundamentally different than the fear that triggered the protests in the first place.

The officer’s gesture last week in Capitol Hill — displaying a patch with a plea to be seen — will read to some as a striking sign of vulnerability in an otherwise macho culture. But this interpretation is too generous. At CHOP and the protests that preceded it, two kinds of fear have collided: an immediate, situational fear felt by police and protesters; and a slower, grinding, even existential fear felt by Black Americans forced to worry about police mistreatment. The officer with the “STOP SCREAMING, I’M SCARED TOO” patch desired, perhaps logically and with the best of intentions, to build a bridge by invoking a shared fear. But in so doing he summoned an age-old American false equivalence, revealing a disorienting dissonance at the heart of the nation's uprising: a failure to reckon with the asymmetries of fear that form a fundamental divide between white and Black Americans.

The officer who wants the screaming to stop: Is he sensitive to the depth of anguish brought on by this latest season of police killings? Does he fear the power endowed in him by the state to commit violence? Is that fear borne of an awareness of its long history of abuse? The officer who is armed, armored and afraid: Does he know the names of Che Taylor, Charleena Lyles or the 27 other people who have been killed by Seattle police just since 2010? (The first of this decade was woodcarver John T. Williams, who police mistakenly shot four times on Aug. 30, 2010.) Is he among those officers who, after successfully returning to the East Precinct last week, whooped and hollered in revelry and congratulations without evincing a shred of self-awareness? Did he consider what the so-called “liberation” of CHOP by intimidating, militarized means might signal to the medics, homeless people, citizen journalists and mostly peaceful demonstrators who resided there, to say nothing of the public at large? Did he think these methods might make people scream in fear?

The national uprising against police violence indicts a culture that permits the unjustified killings of civilians and allows those responsible to evade accountability. Despair over these tragedies has been thrust into the faces of police officers across the country. It’s the turmoil of centuries manifesting overnight: This is no doubt painful — even intolerable — for those within the institutions most responsible, especially police. But the universal condemnation of George Floyd’s killing notwithstanding, many white Americans expressing their views both in my Facebook newsfeed and in the White House believe former Minneapolis police officer Derek Chauvin to be one bad apple. “Not all police!” they scream. But before he committed his heinous act, Chauvin racked up at least 17 previous misconduct complaints and took part in three previous shootings, one of which was fatal. All this before he knelt for nearly eight minutes on the neck of a man who begged to breathe while three of Chauvin’s partners allegedly aided and abetted the killing, according to charging papers. Chauvin is no doubt rotten, but Floyd’s death is not his shame to bear alone.

This asymmetry of fear extends beyond the police to white society at large. Those who have helped make Robin DiAngelo’s White Fragility a bestseller will recognize parallels between popular defenses of police and the phenomenon of anger, fear and guilt triggered in white people during conversations about race that her book explores. Never having had to grapple with the “discomfort of being seen racially,” DiAngelo writes, many white people become defensive when considering the implications of such an awareness. We struggle to face the fact that whiteness — more vast and complex than the concept white fragility allows — denotes at base something oppressive, is inextricably tied to fear of the other. In resisting this uncomfortable truth, we lash out and deny any sense of culpability, asserting instead a fundamental belief in our own neutrality, goodness and innocence.

Appeals to this belief manifest in many ways. It is the white-led institution that professes a commitment to inclusion but has no Black people on staff. It is the white homeowners who display Black Lives Matter signs in their yard but oppose upzoning. It is the white men and women deemed “Karen” and “Ken” who, when called out on video for their fear-triggered racism, double down with histrionic performances. It is the police officers, leaning on the doctrine of qualified immunity, who have repeatedly received nonindictments following the killings of Black Americans. It is dismissing Donald Trump’s racism and attendant appeal to white nationalists because he cut your taxes and boosted your 401k. It is the white citizen who denounces property destruction but can’t summon the courage to denounce, with the same fervor, the destruction of Black lives.

It is scary to confront the racism lurking everywhere in society; it is even scarier to confront the racism lurking in our own minds, formed by forces beyond our grasp. I know this fear well: It has at times been destabilizing to consider the ways whiteness has shaped me, my family, my country — and then to discover that, broadly speaking, some kind of advantage has accrued at the expense of someone else’s civil rights, or someone else’s original lands. More disruptive still is asking: To what do I owe this inheritance of debt?

The fear borne of these questions is real and understandable, because their implications are both material and spiritual. But it is fear only in a superficial and immediate sense, in much the same way a militarized police officer fears screaming protesters. I have a hunch that this fear is actually a pretense for something else, an expression of shame that comes from trying to square a weightless terror — STOP SCREAMING, I’M SCARED TOO — with the much more consequential terror expressed by those who whisper, “I can’t breathe.”

To want the screaming in the streets to stop is to believe in this false symmetry of fear. Unarmed or even mostly unarmed anti-racist protesters do not exist on an equal plane with a police force that possesses guns, wooden batons, rubber bullets, chemical weapons and armored Humvees to power a troubling legacy of brutality and racism. If this comparison is not convincing, consider a far more disturbing symmetry: “At least 6,500 Black people were lynched from the end of the Civil War to 1950, an average of nearly two a week for nine decades," the journalist Nikole Hannah-Jones wrote recently. "Nearly five Black people, on average, have been killed a week by law enforcement since 2015.”

To me, a police officer announcing fear against this backdrop suggests more than a distorted sense of danger. It reveals a worldview rooted in fantasy and a self-conception that occludes the experiences of people not like you. I do not support the dehumanization of police officers. I support an embrace of everyone’s humanity that honors both the history and ideals of a nation that professes a belief in equality. Such an embrace would mean acknowledging past and enduring wrongs. It would mean sincerely apologizing and then committing to the long, difficult and necessary path to repair and reconciliation. This process is long overdue, but we can’t pretend a small-font patch affixed to body armor is the way to begin.

Whether the gulf between the police and the people most affected by their misbehavior can be breached, I do not know. What I do know is that when I look a white police officer in his eyes I ache for him as I ache for myself, knowing all too well that the screaming implicates us both. The task, as urgent now as it’s ever been, is to face this unrequited rage with the courage to interrogate ourselves. The first step might be admitting the fear of being yelled at — or even a death threat — is not equal to the fear of dying.