U.S. Customs and Border Protection confirmed the presence of federal cops — that was news to the mayor and governor. 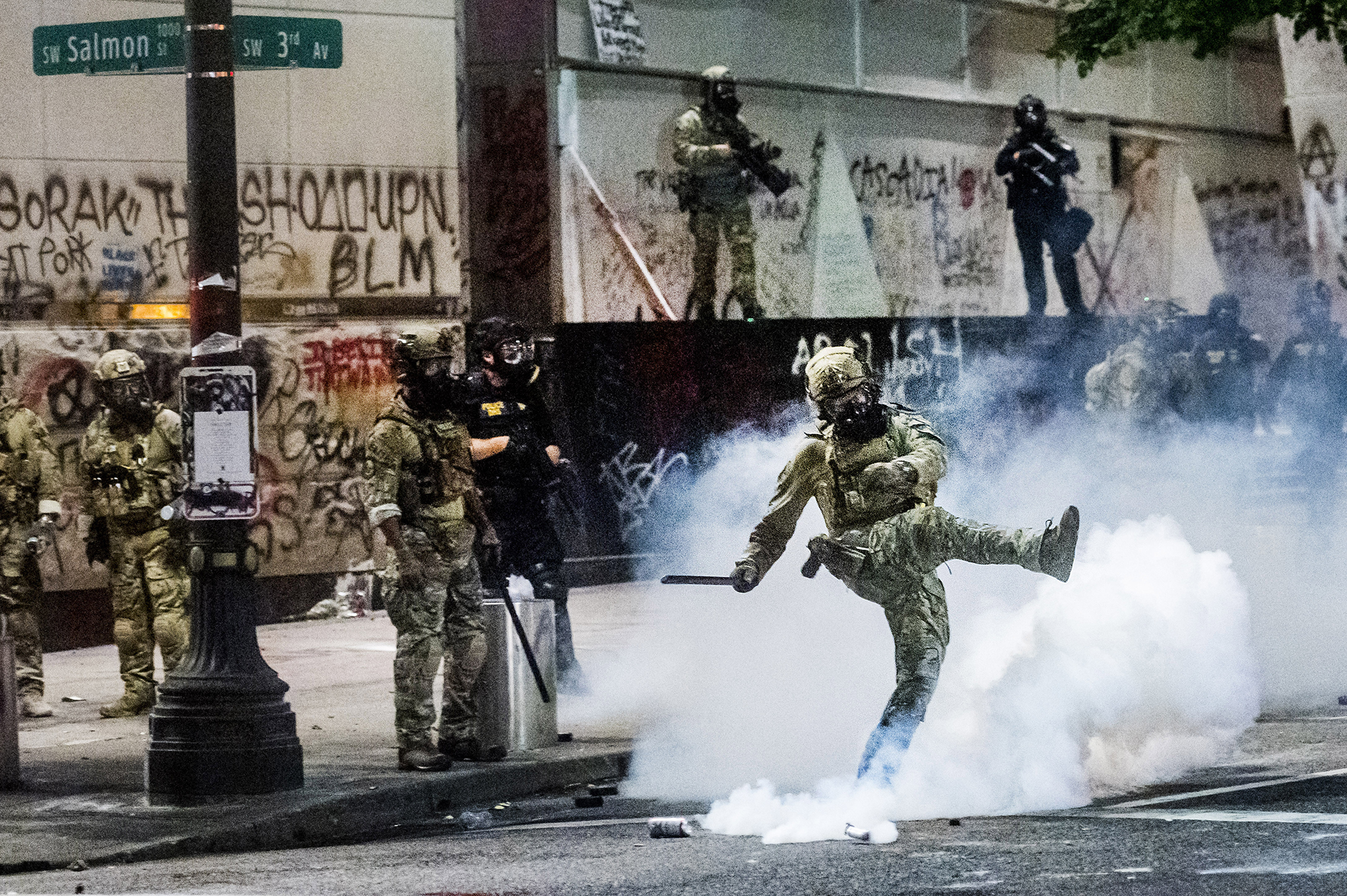 Federal agents were stationed in Seattle earlier this month, as they have been in Portland, the U.S. Customs and Border Protection agency confirmed.

But city and state officials and the Seattle Police Department say they had no knowledge that federal law enforcement was in Seattle for Independence Day, with a mission to protect U.S. monuments and buildings.

In an email, Customs and Border Protection said the agency deployed agents to the Henry M. Jackson Federal Building in downtown Seattle in anticipation of the July 4 holiday — the same weekend a driver hit two protesters on Interstate 5, including Summer Taylor who died soon after the hit and run.

Approximately 50 personnel were deployed among Seattle, Portland and Washington D.C., said Jason Givens, a spokesperson for Customs and Border Protection, or CBP. Givens said the agents were sent in support of the Federal Protective Service, a police arm of the U.S. Department of Homeland Security that regularly protects federal facilities. They did not make any arrests.

Homeland Security officials are also said to have deployed agents from U.S. Immigration and Customs Enforcement, or ICE, to Seattle, according to the Washington Post.

Ever since the police killing of George Floyd in Minneapolis in May, protests have continued in the Pacific Northwest. Protesters have been in the streets of Portland for more than 50 consecutive days. Federal officers there to protect U.S. property have moved well beyond that mission with some patrolling the streets and making arrests. News reports of plainclothes federal agents in unmarked vehicles snatching protesters seem to have only reenergized the demonstrations.

In Seattle, protests escalated again this past weekend, with reports of damage to downtown businesses. Police, whom activists, Seattle City Council members and others have criticized for excessive use of force, turned to pepper spray and blast balls to stop the assault on officers, the department said. In June, a federal judge banned Seattle police from using chemical irritants and other crowd control methods against peaceful protesters. City council legislation that bans the use of such methods altogether will take effect later this month.

Despite the ongoing outrage over police brutality and the clampdown by federal agents, particularly in Portland, President Donald Trump has said he plans to continue to deploy federal law enforcement officers to various cities, which he said are “all run by very liberal Democrats.”

Givens of Customs and Border Protection said officers were sent to Seattle because of Trump’s executive order last month, which focused on protecting American monuments and claimed that “many state and local governments appear to have lost the ability to distinguish between the lawful exercise of rights to free speech and assembly and unvarnished vandalism.”

In line with the executive order, on July 1, the Department of Homeland Security announced a new task force to coordinate the department’s “law enforcement agency assets in protecting our nation’s historic monuments, memorials, statues, and federal facilities.”

An internal Customs and Border Patrol memo, obtained by news magazine The Nation, described the new executive order and task force, and noted that “mobs” had torn down statues in Portland, San Francisco, Washington D.C. and other cities.

In Seattle, a Confederate memorial in the Lake View Cemetery on Capitol Hill was destroyed over the Fourth of July weekend. The controversial 1926 memorial honors Confederate veterans who fought in the Civil War. In the 19th century, the Confederacy sought to preserve slavery and white supremacy.

Washington state government officials said they had no knowledge of additional federal agents being stationed here other than the usual officers charged with protecting federal buildings in all 50 states.

Tara Lee, a spokesperson for Gov. Jay Inslee, said the governor’s office had had conversations with the White House and the Department of Justice and that state officials were told there are no new federal agents here with “the same mission they have in Portland.”

“All that being said, we are greatly alarmed by what is happening there,” Lee said, referring to Portland. The governor believes “federal law enforcement in the U.S. should never be deployed against its own people and against the wishes of state and local officials.”

“We will continue to stand against these acts and any similar abuses of power attempted in Washington,” Lee said.

Mayor Jenny Durkan had previously raised concerns about federal forces being deployed to the protest zone on Capitol Hill once known as CHOP, or Capitol Hill Organized Protest, which Trump threatened to take over.

“Take back your city NOW. If you don’t do it, I will,” Trump tweeted in June.

In response, Durkan said at a news conference:  “The threat to invade Seattle, to divide and incite violence in our city is not only unwelcome, it would be illegal.”

When asked about the presence of federal agents earlier this month, Kelsey Nyland, a spokesperson for the mayor, said Durkan’s “concerns center around the Trump administration’s threats to have federal forces conduct local law enforcement activities, including patrolling Seattle streets and engaging in crowd management — not simply providing security inside federal buildings.”

In a letter sent on Monday to the Department of Homeland Security and Attorney General William Barr, Durkan and other mayors argued the deployment of federal officers “violates fundamental constitutional practices and tenants of federalism.” The letter further states that federal officers have only escalated tensions in Portland. It also criticizes agents for not identifying themselves and using chemical irritants, such as tear gas, although the very same criticisms have been lobbed at police in various cities, including in Seattle.

In a similar letter to Congress, Durkan and other mayors further accuse the federal government of sending agents to cities without any attempt to coordinate with local officials, including police.

Sgt. Lauren Truscott, a spokesperson for the Seattle Police Department, confirmed that police had not been made aware of any increased federal law enforcement officer deployment in the city around the Fourth of July but added that “unless we are working on a joint investigation or task force with federal agencies, we are not typically apprised of their deployment.”

The Seattle Police Officers Guild, or SPOG, did not return requests for comment. On Monday, however, in a conversation on the Dori Monson Show on KIRO Radio, Mike Solan, president of the union, said that it might be time for the city to welcome “federal intervention.” Solan pointed to Portland and the continued protests in Seattle and what he described as threats to officer safety as good reasons for such intervention.