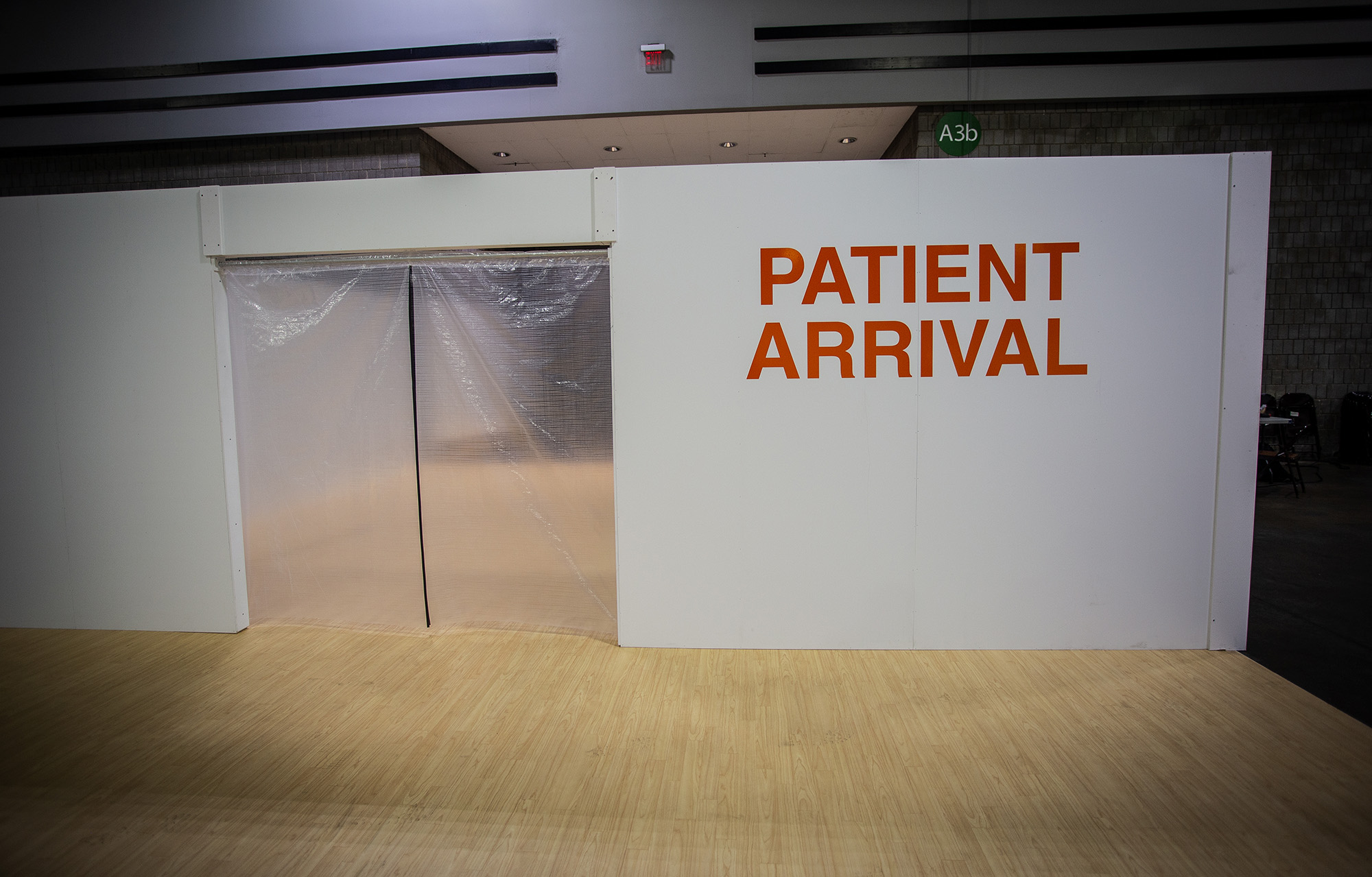 For every patient that arrives at a hospital for COVID-19 treatment, it is estimated many more go about their day undiagnosed with more mild symptoms, some lingering for months with shortness of breath, chest pain or irregular heartbeats. (Ron Harris/AP)

Four weirdly miserable days in bed. Whole-body aches, beginning and ending in my head. Intense thirst. If I could have laughed I would have laughed at myself, straining to get up as if the bed were a steel plate and my body a magnet. But the sounds I made were more like groaning. When I blew my nose — my new ritual, a rosary of Kleenexes — watery spots of blood appeared on the tissue. Stigmata?

Read more: The Seattle we knew is gone. What comes next?

Humidifier, elderberry, soup soup soup. I slept like a brick. On day five, a new day, I felt better nearly as abruptly as I’d fallen ill.

But not everything came back quite the same. I kept taking elderberry capsules, because whenever I skipped a dose my throat chafed and my lymph glands muttered obscure throbs. I appeased the lurking virus every day with herbal remedies and vitamins I chose to believe in, but for the first few weeks it was only standard cold-remedy faith, not the kind that kicks in when you’re afraid.

My husband caught the bug about a week after me. He coughed less, felt maybe a few degrees less miserable, recovered about as quickly. After the worst had passed, we spent cozy hours together, sharing a box of Kleenex and watching British people on Netflix solve crimes or bake cakes.

One of the ordinary hard things about being human is that our bodies produce such an endless parade of aches and twitches, oddities that go slosh in the night. We mainly ignore them so we can go to work. Soon my husband and I both felt fine enough to resume normal life.

So I was on my way to my office one morning, talking on the phone with my mother, when she asked me, “Are you walking up the hill?” No, I was strolling along a sidewalk so flat the Duwamish name for my neighborhood recalls a skate’s wing. And yet, now that she mentioned it, my words kept huddling on one side or another of little gasps. Had my heart always raced like this?

I called my naturopath, bought a pulse oximeter, because by now it was April and everybody knew a cold could be dangerous. Now that I noticed it, my chest felt oddly tight much of the time. And I breathed slowly — though try counting your own breath objectively! It’s impossible. But all the charts on the Internet agreed that six to nine breaths per minute is slow for a human. Did it matter? Maybe not, my doctor said. Maybe.

It wasn’t easy to find a pulse oximeter; many models had recently sold out. When mine arrived, a little white plastic capsule, it reminded me of the Discovery One’s shuttles in 2001: A Space Odyssey, which I had just rewatched on a virtual movie date with friends. My little technological marvel had the same uncanny way of taking on character traits that depended on one’s angle of vision. At first it blinked healing clarity, like a digital savior. Then it scared me.

Was it OK that my O2 saturation kept dropping to 93, 92, 89, but only when I’d been resting in bed or in my chair at work? Or that it didn’t respond much to deep breathing, but instantly returned to normal if I flipped to lie on my stomach?

My naturopath referred me to my MD, who asked, “Have you had COVID? Because these symptoms are weird, but they are typical of what I’m seeing with post-COVID patients. The good news is that it doesn’t seem to get worse, but it can drag on for a very long time.”

“I can’t tell you for sure that that’s what you had,” she added. “I mean, we’ve only recently started turning people prone with COVID, but who knows whether other viral symptoms could have been helped that way?”

Who knows? The nonanswer for every pandemic question. My questions seem petty compared with the ones many are asking: How long will this go on? Will I still have a job — or be able to find one? I’m a psychotherapist, fortunate to have a job that’s busier than ever. My work offers me windows into lives, even via Zoom, and it shows me an impact both isolating and, to a degree I can’t remember ever witnessing before, collective. However lonely it’s making us, the pandemic is a wave cresting through our bodies, and we’re waiting to find out where we will all end up.

It’s strange not even to know whether or not one has met the famous virus rearranging our lives this way. At first, tests were scarce; now, they’re just uncertain.

At one point I took my fluttering heart to urgent care, where they shunted me to the COVID wing, though I’ve only tested negative for the virus. A plastic-shielded nurse confided that she and her colleagues believe many of them have had COVID, too. A doctor suggested that perhaps my heart has always raced oddly — one moment plodding along as usual, the next galloping for no obvious reason. Maybe, he said, we’re all scrutinizing our bodies much more anxiously than usual, and noticing all kinds of things we never thought about, before COVID-19 made us worry.

He said it through his mask, and I answered through mine, both of us living with Schrödinger’s virus, for our mutual safety behaving as though all potentials were simultaneously true: we both had the virus; neither of us had it; one, not both of us, had it.

I don’t know what kind of meter could measure the saturation of uncertainty in our blood these days, let alone indicate an acceptable reading. In my work as a therapist, uncertainty is the bread and butter. Psychotherapy is a bit of an art, bit of a science and uncomfortably close at times to a faith that life is better when we turn toward uncertainty squarely, accept it as best we can.

In terms of the mind’s development, we seem to need to share an experience before we can really bear it. As a teacher of mine once said — quoting a source I can’t remember — to a baby a hiccup is the same thing as thunderclap. It’s only with each other’s help that we learn to differentiate sensations as out there or in here, dangerous or harmless. Without each other’s help to make sense of things, we’re alone in our bodies, and right now every little bump may (or may not!) bring a jolt of raw fear.

Which I imagine is why I find it so comforting when my doctor sees what I see: My body is not quite its old healthy self, though perhaps it’s well enough to go on without much need of her help, after all. I appreciate her willingness to name what she doesn’t have any way of knowing for sure.

A few tests and a few more symptoms later, I’m left with a pair of white lines on an X-ray, one toward the base of each lung: a result I learned was neither normal nor dangerous, distinctly COVID-ish, otherwise just really odd. In the absence of harder evidence, they may be an enigmatic signature of a virus that continues to surprise and frustrate those who are lucky enough to avoid its more lethal intensity. Or maybe I’m just experiencing oddness that would never have caught my attention if it weren’t happening during a pandemic.

Either way, all of me is working well enough. My new normal includes a few extra creaks in the floorboards, but maybe that’s all they are, harmless noise.

A friend helped me come up with a name for my mystery condition: NOVID. Maybe it was COVID-19, maybe just some other crappy virus.

NOVID is like one of those false bears I’m always seeing on a hike: a beach log or forest boulder, enticingly hunched and shaggy in the shadows.

I always long to see a bear, at least from a safe distance. Instead I see mainly false bears, which are after all much more common. But I can’t really blame my brain for preferring the thrilling certainty of an actual bear.

Brains are always swimming hard against the tide of uncertainty. Brains live by making sense of things, by discovering truths or making them up if need be.

I wish I could safely assume I’ve gained some shareable wisdom about how to get through a bout of COVID-19. I wish my blood carried healing antibodies. Instead I’m where we all are, apparently — swimming in a stream of unknowns, unable to slow down to tell for sure which bears I glimpse on the shore are only downed trees.

I would love to say something reassuring, such as, let’s hold on. Let’s hold each other tight — though of course I don’t mean it literally, since a hug between you and me could possibly kill someone neither of us even knows. So we hold on however we can, by Zoom or phone or through masks at a careful distance.

People often wish therapy offered reassurance; therapists wish so, too. Instead, what I have right now is only a practice of turning toward whatever none of us yet knows and seeing it together as best we can, be it death or just another harmless shadow.