Seattle police respond too slowly. A 50% cut will make it worse

Let's transform the Seattle Police Department by addressing both racial injustice and the enduring need for fair and effective policing. 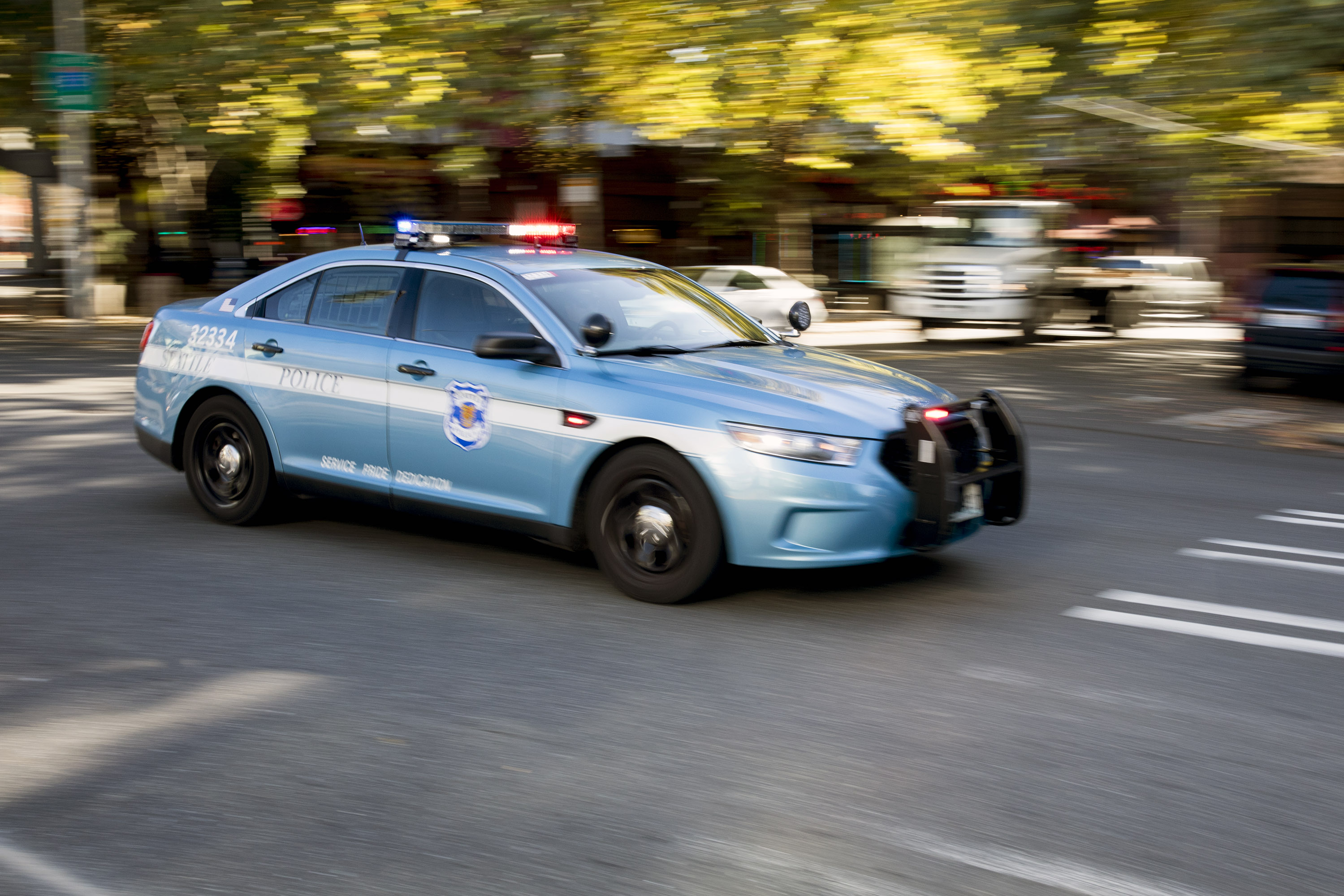 In this file photograph, a Seattle Police Department vehicle drives at a high speed along Denny Way in Seattle, Oct. 24, 2017. (Matt M. McKnight/Crosscut)

In Paris and Prague, police officers give a formal hand salute to people they stop. It’s meant as a gesture of respect, a way to both honor the people they serve and to signal that their encounter will be dignified and professional.

We need such a salute right now in the city of Seattle, where protests, violence and disruption have coursed through the community since May 25. That’s the day George Floyd was killed on a Minneapolis street by police officers who had once taken an oath to defend the rule of law and to protect life. Floyd’s death has served to focus the country’s attention as never before on the long history of racial injustice perpetrated by police.

Almost no one opposes police reform in Seattle. There are certainly different opinions about what needs to be done and how we get there, but the lingering racial disproportionality in stops, arrests and incidents of excessive force demands a transformation.

But the transformation we seek won’t come from the ideological extremes. It will come — and take root — only if strong, collaborative leadership identifies and implements specific steps that can address both racial injustice and the enduring need for fair and effective policing.

One thing is certain: If the people of Seattle perceive that core police services will become even slower than they already are, our chance for effective and lasting change will be lost in contempt for a city council that ignored its paramount responsibility — to safeguard public health and safety. Seattleites already lament slow police response times. As the city considers major cuts to its police budget, they will not accept a gutting of law enforcement services that slow the pace of response even further. Nor should they.

The Seattle Police Department’s response benchmarks call for officers to arrive at so-called “priority one” events — crimes in progress, for example – within seven minutes. This standard is not met in half of the priority one dispatches. And response benchmarks for lower-priority events are also rarely met, with responses to burglaries and other property crimes sometimes taking hours. The ability of the police to respond efficiently is directly tied to the number of police officers available at a particular time.

Thankfully, Mayor Jenny Durkan and Police Chief Carmen Best have already shown they can shepherd us toward transformation while pushing back against hyperbolic political rhetoric and harmful proposals. Calls on the left to abolish the police and the unquestioning defense of the police on the right are difficult but surmountable obstacles to lasting change. Fortunately, Durkan and Best have allies in Councilmembers Debora Juarez and Alex Pedersen — the only members who have not endorsed a draconian 50% cut to the police budget. These four comprise the core leadership at City Hall able to advance pragmatic, long-lasting reform that will protect public health and safety and win broad public support.

Can reductions in the police budget be made? Yes, absolutely. But what those cuts are and how they are implemented will require careful analysis and critical thinking. While Durkan and Best have announced their intention of moving certain functions out of the police department, they haven’t yet tackled — and neither has the city council — the question of who will respond when you call 911, if not the police. The answer, in all of its minute details, should be the starting point for any discussion about reducing the police budget. To slash police services without this answer will be a slap to the public’s face instead of a salute.

With this in mind, it is worth looking at some of the facts around policing in Seattle, to preview what is possible and what might happen if we merely succumb to the loudest voices or, worse, act without considering the ultimate consequences.

Our interactions with the police usually begin with a call to 911 seeking help with a specific problem. Seattle police struggle to keep up with the demand for their services.

In 2019, Seattle’s 911 center received 800,527 calls — about 2,200 per day, nearly 100 per hour. Calls to 911 range from serious felony crimes in progress, like aggravated assault or armed robbery, to mundane events like a parked car blocking a driveway or graffiti sprayed on a building. Of the total calls, 98,353 involved a fire or medical emergency and were transferred to the Seattle Fire Department’s alarm center. The 911 center’s dispatchers sent a police officer to a specific location 272,002 times last year, a triage and dispatch rate of 34% of the total calls received. Put differently, police were not dispatched to about two-thirds of the 911 calls received.

A deeper analysis of the officer-specific dispatches will show that in some cases a nonpolice responder would have been more appropriate. That is why the city council voted in 2017 to restart the civilian Community Service Officer program, which had been discontinued in the early 2000s because of budget constraints. These unarmed civilian employees are trained to handle noncriminal events that fall to the police when there’s no one else to send.

In addition to responding to 911 center dispatches, police officers themselves initiated, or were flagged down on the street by a resident, 173,813 times for so-called “on view” events. This proactive work by our officers is crucial to effective policing; it bolsters their role as guardians in our neighborhoods and illustrates the power we have given them to be our eyes and ears to keep us safe.

The big takeaway here is that police perform a wide range of vital services, not all of which require an armed officer. As some community members have suggested, shifting response to others who may be better prepared to respond — essentially “civilianizing” the response — could be a wise and pragmatic change.

But it’s not a direct trade-off. It doesn’t follow that shifting some responses to others allows for a significant reduction in police personnel. Consider calls to respond to mental health crises. These are often volatile situations requiring a police presence even if the primary responders are civilian mental health professionals. In some cases, Seattle firefighters have been victims of assaults and are reluctant or unwilling to respond to certain calls without the police. The point here is that shifting response duties to nonpolice options doesn’t mean we can slash the police budget by 50% and lay off hundreds of police officers.

How does Seattle stack up nationally? Violent and property crime for cities with populations between 500,000 and 1 million in 2018 was 8.3 and 38.7 per 1,000 residents, respectively. Seattle’s violent crime rate was just below the national average, and its property crime rate was significantly higher.

But these crime rates present an incomplete picture since they measure only the major crimes that police agencies report to the Federal Bureau of Investigation. Not included are dozens of other crimes, including all drug offenses, misdemeanor assaults common in domestic violence cases, fraud, identity theft, kidnapping, and nonrape sex offenses, among others.

The number of 911 calls for service and the frequency of crime, combined with SPD’s slow response times, conflict with proposals to cut the police budget and reduce services available to the people of Seattle. But this workload does raise some key questions: How many police officers do we need? How should we best use those officers? And, if not the police, who should respond to and resolve the tens of thousands of noncriminal events each year that the police have traditionally been called upon to handle?

Unless significant response tasks are shifted to other qualified and ready-to-go responders, the number of officers we have in Seattle today seems reasonable. Huge cuts without careful consideration of the demand for police services might please some today, but in the end it serves no one.

Finally, while the transformation of policing is important, it will not by itself adequately address the racial inequities we have allowed to persist for decades. One step we could take to erase those inequities would be to provide working families affordable and high-quality child care and preschool during the all-important birth-to-5 years, so every child has opportunity for the strong and fair start they need and deserve. The well-established science of early learning shows that kids who start strong stay strong, with better education outcomes, low levels of criminal behavior, higher earning power as adults and better health. These upstream investments would be worth every penny.