Seattle protests intensify, even though federal agents are absent

With an eye toward Portland, police and protesters again clashed on Capitol Hill Saturday night. 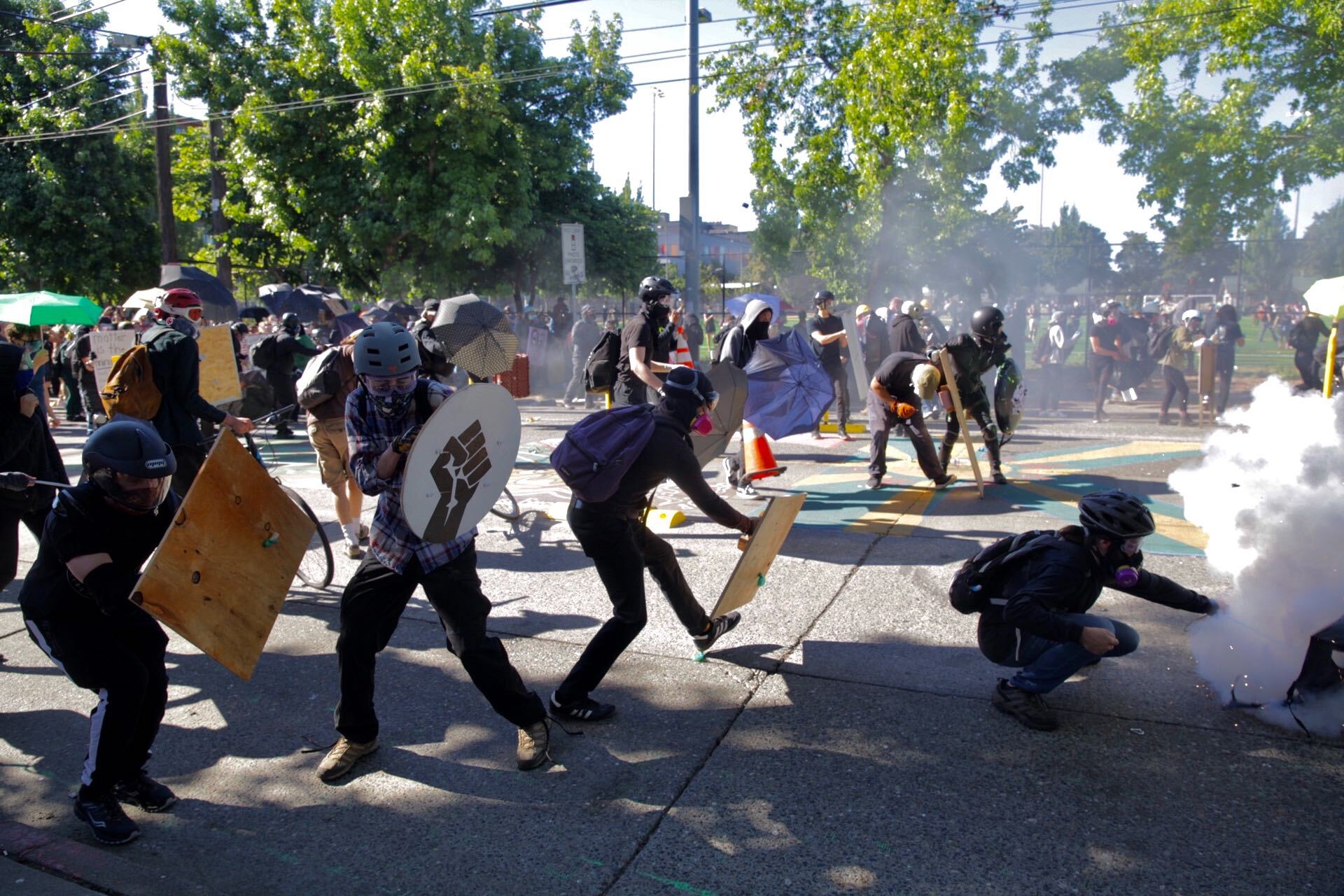 Federal agents were nowhere to be seen at protests in Seattle on Saturday, but the specter of their presence here and in Portland helped fuel some of the most tense clashes between demonstrators and local police in weeks. By the end of the night, dozens of protestors had been arrested.

The march and standoff were, as demonstrator Mo Tilmo called it, a “second wave” of action — rekindling the energy of the protests that quickly grew in Seattle after the killing of George Floyd by police in Minneapolis in May. As it was at those earlier marches, attendees on Saturday chanted “Black Lives Matter” and carried signs and posters demanding the defunding of police.

But they also had an eye toward Portland, where federal agents sent by President Donald Trump have used aggressive crowd control tactics, shoving and clubbing protesters, launching tear gas and making arrests in unmarked cars. The large march in Seattle was called in response to Homeland Security officers being sent to Seattle in recent days.

“It does feel different because of the tension in Portland,” said Tilmo, who has been a regular attendee of protests in the city. For many of those marching, the two issues at the center of the protest — police brutality and federal overreach — were connected.

Police stayed out of view for hours as protesters looped south from Capitol Hill and back to the former scene of the Capitol Hill Organized Protest zone, or CHOP, near Cal Anderson Park. Even when several members of the crowd set fire to construction trailers at the site of the nearby demolished youth jail, police arrived at the scene only as the structures burned.

But by midafternoon, the Seattle Police Department declared the gathering a riot, apparently in response to scattered property damage and a steady stream of rocks, bricks, bottles and fireworks thrown in their direction. The department released a photo of a hole in the wall of the East Precinct that a spokesperson said was blown open by some kind of explosive device.

"Due to the ongoing damage and public safety risks associated with this incident, SPD is declaring [the demonstration] a riot," the department tweeted at 4:25 in the afternoon.

What followed were their now-familiar crowd control tactics of pushing protesters back with bicycles and liberal use of blast grenades and pepper spray.

The tensions unfolded in waves. Police would push protesters away from Capitol Hill, only to retreat, before once again pushing people back. At times, police would seem to chase protesters down the streets. Meanwhile, some members of the crowd continued to lob objects at police. A police spokesperson said several officers were injured in confrontations with protesters, one of whom was treated for a knee injury.

Elisa Barett, a nurse wearing her scrubs, was pepper sprayed by police as she tried to pull someone away from an arrest. “It burns all over,” she said, as she doused her eyes. She was angry at the police response. “They’re not being held accountable,” she said.

Bruce Jackman, who had come to Cal Anderson to skateboard, watched and took pictures of the push and pull. He was only observing, but was surprised by police use of blast balls and pepper spray. “They’re going to use whatever tools they’ve got,” he said.

Saturday’s demonstrations came after weeks of relative calm in Seattle. But the Department of Homeland Security confirmed late last week that it was sending federal agents to Seattle with orders to protect federal property. Trump has threatened to send federal agents into a number of American cities for varying stated reasons.

A federal presence had already come and gone from Seattle in early July, but the recent nightly chaos in Portland between demonstrators and federal agents prompted activists and local elected officials to fear a similar situation in Seattle.

“I think it's important that what we're seeing in Portland, and what the president has threatened, is not the norm," Mayor Jenny Durkan said Friday. "In fact, it is contrary to how federal government usually works with local law enforcement." Durkan previously worked in federal law enforcement as the U.S. attorney for Western Washington from 2009 to 2014.

On Saturday, such fears seem to have not been realized. The only obviously visible law enforcement presence consisted of Seattle and Bellevue police.

The demonstrations began in the afternoon at Seattle Central College. The tone was serious from the start. “We’re not out here for fun; no rah-rah,” said a man who identified himself as Rooks as he spoke to the crowd. “This is for the future, literally.”

The marchers proceeded without any police in view. In front of the brand new King County Children and Family Justice Center — or simply the new youth jail, to many — several people left the crowd to break windows and set fire to two construction trailers.

When the crowd arrived back at Capitol Hill, clashes quickly erupted. Similar to how tactics at protests in Hong Kong spread across the globe, the crowds in Seattle mimicked tactics being used in Portland — including creating a “wall of moms” wearing yellow T-shirts and using leaf blowers to blow smoke away from demonstrators.

The shape of the confrontations was far different than it could have been.

The Seattle City Council recently passed a law banning most crowd control weapons, including tear gas, pepper spray and blast balls. The law was set to take effect Sunday, although Seattle Police Chief Carmen Best directed officers on Thursday to leave those tools behind on Saturday.

However, as part of an ongoing agreement with the federal government to reform policing in Seattle, the Department of Justice filed a last minute request to stop the new law from taking effect. In an emergency hearing Friday night, U.S. District Judge James Robart agreed and issued a temporary restraining order, halting the ban for 14 days.

Following the restraining order, police officers on Saturday deployed a steady stream of blast balls and pepper spray into the crowds. One participant, who declined to give her name, showed where a blast ball had struck her on her back, leaving a large welt.

Best said she would not allow officers to use tear gas. While it can be difficult to differentiate tear gas from drifting pepper spray and the smoke from blast balls, a spokesperson for SPD said it had not been used.

A court injunction is still in place against Seattle police using crowd control weapons, such as tear gas, pepper spray and rubber bullets. But exceptions contained in the order have meant their use has continued.