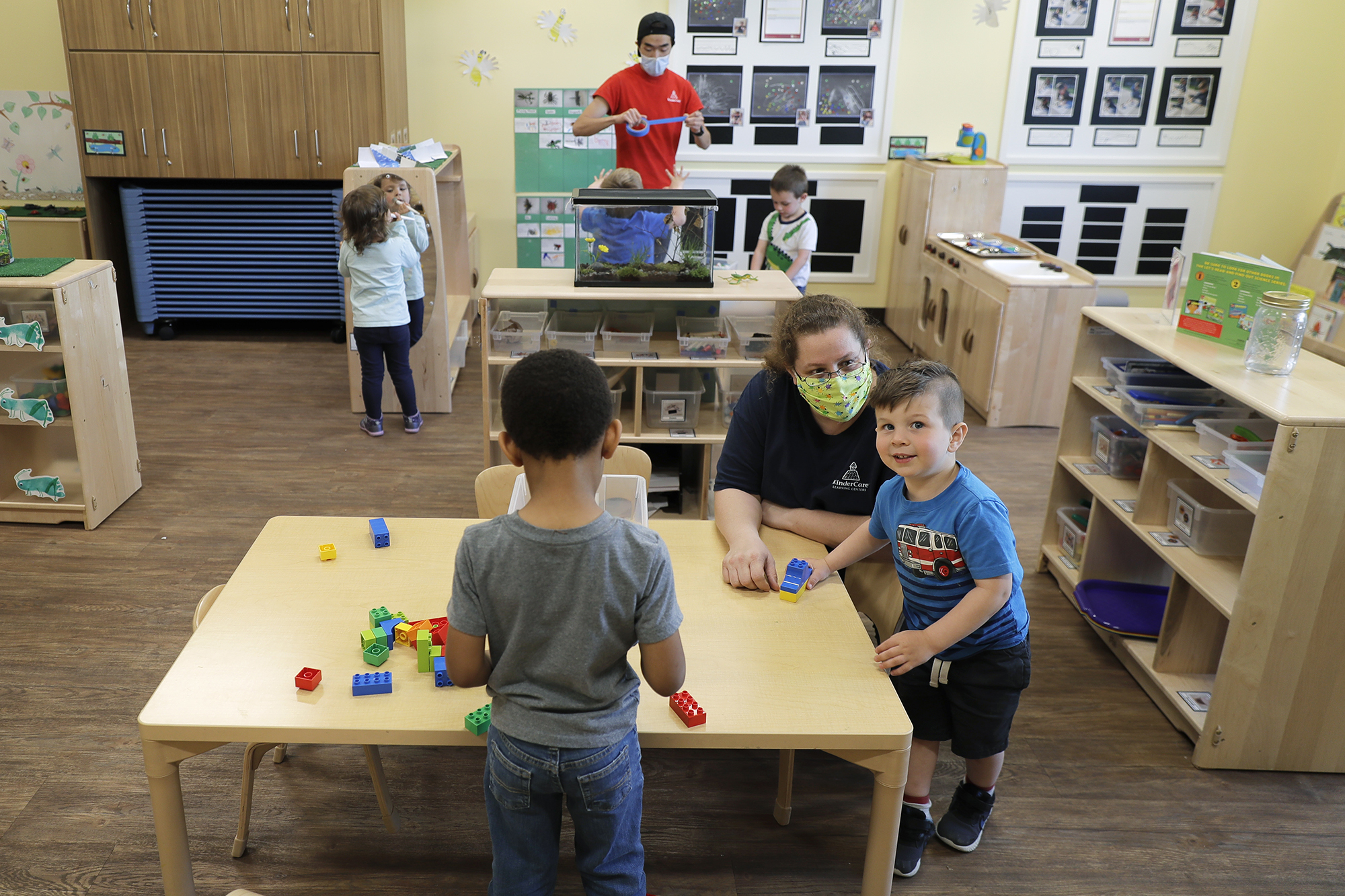 Teachers Jana Blair, right, and Aaron Rainboth wear masks as they work with kids at the Frederickson KinderCare daycare center, in Tacoma, May 27, 2020. The child care provider prioritized children of essential workers as the pandemic unfolded. (Ted S. Warren/AP)

It has taken months for Republican leaders to locate the linchpin for putting Americans back to work: safely resuming school and making child care affordable.

Even Senate Majority Leader Mitch McConnell, R-Kentucky, finally grasps this reality. “There will be a heavy emphasis on education,” he said on NBC News, previewing his latest another pandemic relief bill. “Kids and schools and jobs are connected in every single way.”

Not exactly a news flash for the nation’s 12 million families with school-age kids still at home ­— weary parents desperately hunting for summer camps, maybe a swimming hole, praying that schools will reopen this autumn.

But Democrats on Capitol Hill ­— eager to please teacher unions and allied educators ­— may fail to help move parents back to their jobs, instead putting all their fiscal eggs into school aid. With mayors and educators struggling to reopen classrooms at least two or three days a week, parents must search for affordable child care. Faced with erratic teaching hours and scarce or pricey after-school care, beleaguered parents may simply shrug their shoulders and stay home.

Federal chits for child care already pay a variety of nearly 1.5 million caregivers nationwide, a group that includes loving aunts, licensed day cares and after-school programs run by nonprofits. Refundable tax payments ­— contained in a bill up this week in the House ­— could instantly return income to families for child care as the Internal Revenue Service begins processing returns this summer.

Murray, a former preschool teacher, aims to make care affordable, most immediately for school-age kids, while bolstering the nation’s brittle nonsystem of early education. But Murray faces stiff pressure from labor groups that press for greater school funding. That’s weighed against parents, desperate for school-age care, who have no lobbyist in Washington.

The damage the coronavirus has wrought on child care is coming into plain view. The Child Care Center at Seattle Children’s hospital ­— serving kids of essential medical workers ­— announced it must close next year, because of collapsing revenues. In the Delridge neighborhood of West Seattle, Playmates Daycare, a licensed home that has served children from infants to tweens for 26 years, may yet survive the coronavirus. But director Monique Williams’ count of kids, young and older, has dwindled from 12 to four since the lockdown. There’s no way families could afford to pay $1,200 a month without receiving federal child care vouchers. Now Williams has lost jobless parents, many living a mile west of the Boeing plant, who can't afford copays. “Everyone’s struggling — there’s quite a few [parents] that are unemployed,” she told me. “But these kids are a gift, and you got to nurture them. If I’m not giving my tithes in church, at least I give them day care.”

Elsewhere, COVID-19 and the economic downturn are driving providers of school-age care into the ground. Seattle Public Schools now struggle to keep enough centers open, as more workers return to work. Seven in 10 of California’s 26,000 child-care homes remain open, but nearly two-thirds have lost enrollment or income, mainly a result of parents becoming jobless and even when federal vouchers cover most fees.

Extending a voucher to every paid caregiver hosting a school-age child would cost the federal treasury about $1.6 billion per week, limited to families earning less than $125,000 yearly. This would buoy weary parents into 2021, costing less than the Republicans’ own child care proposal. The popular Bush program currently moves $5.9 billion out to states, split between vouchers for pre-K and school-age kids.

Directly supporting parents would be a bargain, compared with the $116 billion price tag for reopening schools, requested by the American Federation of Teachers, not to mention the $32 billion in bailout aid already flowing to eateries, $25 billion to the airlines, and even forgivable loans for producers of rock concerts.

The big question is whether Senate Republicans will make room for big gains in child care spending, after settling with education lobbies and extending jobless benefits. Even under well-meaning Democratic proposals, families may remained cooped up at home, unless child care relief arrives quickly as tax refunds or portable vouchers with quality assurance.

Murray’s proposal, along with one by Chuck Schumer, D-New York, the Senate Democratic leader, would send aid to governors, who in turn would relay dollars to local agencies. They are tasked with certifying the care organizations that resume operations and hire back staff. Any new child care aid would arrive months from now. “If we do not [bolster child care] correctly,”  Murray said, maybe presciently, “people will not be able to go back to work."

Meanwhile, the partisan sideshow over how to reopen schools yields far greater political returns for the Democrats than does day care. President Trump fans the flames, saying he "may cut off funding" if educators delay reopening. In turn, labor chiefs embrace the battle. “Please, under no circumstances, take medical advice from Donald Trump … when it comes to the health of your children,” said Lily Eskelsen García, head of the nation’s largest teacher union, on CNN this month.

Still, odd political bedfellows remain enticed by child care vouchers. Republicans get to apply market remedies to the growing early-education sector. Social-justice groups, meanwhile, like the efficient cash transfer that vouchers provide. Plus, a major boost to the federal block-grant would instantly employ many women and recent college graduates as caregivers.

Back in Seattle, Playmates Daycare’s Williams dreams of rehiring staff and better-funded vouchers for families. Mostly, she awaits her babies and middle schoolers to return. “I can’t do a Facetime call," she said. "I want to embrace them.” 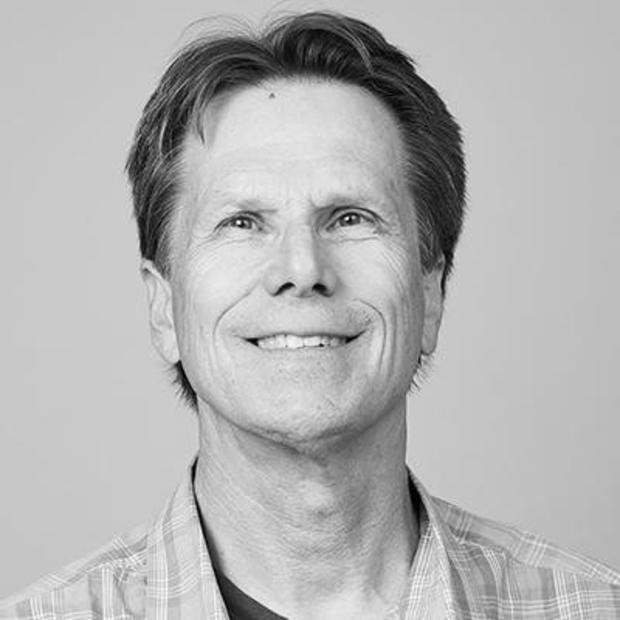 Bruce Fuller, professor of education and public policy at the University of California, Berkeley, is author of Standardized Childhood.