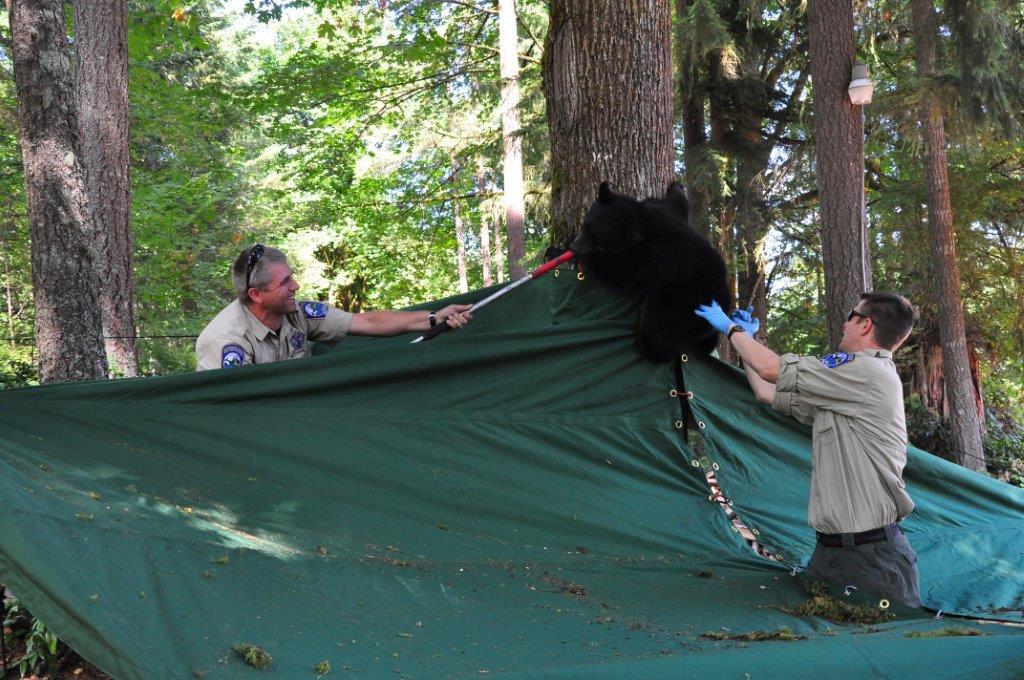 Officers Lance Stevens and Nick Jorg, with the Washington Department of Fish and Wildlife, set up a catch net to provide a safe landing for a bear cub on Aug. 16, 2015. The officers had responded to reports of the cub in a tree, and learned its mother had been killed two days prior. The cub was taken to PAWS for rehabilitation. (Sgt. Kim Chandler/Washington Department of Fish and Wildlife)

It was a classic “orphaned-bear-cub-in-a-tree” situation, says Capt. Alan Myers, head of wildlife enforcement with the Washington Department of Fish and Wildlife for North Puget Sound.

Some years ago, Myers and his partner tracked a black bear cub to a tree; it had been sighted and reported by concerned citizens. Removing large carnivores like bears and cougars typically requires a special high-strength tarp that attaches to a tree base to catch a tranquilized animal, but Myers and his partner didn’t have one. With four or five cameras from media organizations filming, the wildlife officers decided to improvise with a regular tarp, thinking it would be strong enough to hold the cub’s weight.

“He fell down about 50 feet, and shot right through ⁠— just ripped right through that tarp and hit the ground really hard,” Myers recalls. “I just remember thinking, ‘What a calamity to have occurred.’ I was horrified that we were not able to save that animal and give it a future because we just didn't have the tool available.”

As Puget Sound’s urban development encroaches farther into bear and cougar habitat, more people are reporting “problem” wildlife encounters, Myers says. That can include sightings, injured animals, or aggressive behavior. Because apex predators are important to forest ecosystems, killing or euthanizing them is less optimal than deterring them with nonlethal scare tactics (like dogs) ⁠or removing them nonlethally.

But for years, Myers has had limited access to that essential, high-strength tarp. The six-county region has only one specialized catch net. At about 50 pounds, it’s light enough to carry through a forest, but strong enough to  withstand the weight of a knocked-out mammal and catch it 6 feet above the ground without collapsing. Myers estimates that catch nets improve his officers’ chances of safe removal by 90%. “You don't have that net available, and you're taking big chances,” he says.

The nets can last 10 or more years, mainly because they aren’t used very often. “Sometimes it is years between deployment, but you have to have them on hand in case the need arises,” says WDFW's Sgt. Kim Chandler. It can take hours for officers to get to the nearest net, often when time is of the essence.

But on June 22, WDFW secured funding from the Mountain Lion Foundation for a new, tailor-made catch net, costing $2,700 and currently being built by Washington Tent and Awning. The lone net is used primarily for bear removals in King County, while the new net will be deployed for both cougar and bear removal in Snohomish, Skagit and Whatcom counties.

Employees and wildlife advocates say the agency has been grossly underfunded, so it often pursues grants from hunting and conservation groups instead, Myers says.

“The number [of sightings] seems to be swelling each year. … It wasn't logistically feasible for us to deploy that one net way outside of certain areas, because we knew we were going to need something to backfill it,” says Myers, who has been involved in about 15 nonlethal cougar removals and three or four times as many bear removals in his 20 years on the force. He says Whatcom and northern Skagit counties were hotspots for sightings last year.

But the number of sightings doesn’t necessarily indicate anything about the size of cougar or bear populations.

“While it may seem that cougar encounters are increasing, we must realize that the human population in Washington has grown from 4.1 million in 1980 to 7.6 million in 2018,” a recent WDFW pamphlet explains. “That, coupled with the growing popularity of outdoor recreation, especially high-speed sports like mountain biking and trail running, means more people are passing through cougar habitat, yet cougars are almost never seen.”

But when a cougar killed a cyclist in North Bend in 2018, Myers says people were “spooked” for a long time. Cougars spotted on Mercer and Vashon islands over the past few years also drew fear and fascination. A current legislative House bill would override a 1996 law banning hunters from using hounds to hunt cougars by providing for a small pilot hound-hunting program, and the state Fish and Wildlife Commission voted to increase the number of cougars people are allowed to hunt, despite evidence that this increases human-animal conflict.

“I think that [increase in sightings] was possibly an offshoot of that heightened worry in awareness from the public from having experienced that trauma, and seeing that trauma proliferate through the media,” Myers says. “So for a while there, everything we were getting was a cougar being seen in everybody's backyard and near schools.”

When wildlife officers get a call about a wildlife sighting, they formulate a response based on the animal's behavior. Myers says most people contact WDFW after seeing an animal close to homes or schools. If there isn’t an imminent threat, an officer can often calm someone over the phone.

But for more precarious scenarios — like when an animal eats or threatens someone’s pets or livestock — an officer will visit the scene to evaluate the environment.

“Many times, if the animal is left alone, they will move on, but sometimes there is [a] need to capture the animal, and that is at the discretion of the officer or biologist that responds,” WDFW bear and cougar specialist Lindsay Welfelt says via email.

If an animal is still on the scene, multiple officers determine whether they can remove and relocate the animal safely or if they need to euthanize it. “It generally is much harder for us to justify releasing an animal that has depredated on somebody's livestock or pets, and certainly if it's a serious threat to humans,” Myers says.

Large carnivore removal can require three to four officers wearing pistols, tasers and pepper spray; at least two officers respond to smaller animals like cubs. Those tools are typically used only in “extreme” circumstances: Tranquilizer dart guns and live baited traps (culvert traps for bears and “big box cage” traps for cougars) are favored. In tense situations where public safety is a priority, Karelian Bear Dog handlers will arrive to harass the animals away from people.

Westfelt says both bears and cougars tree themselves in response to perceived danger. When officers arrive at a treed animal, they’ll unfurl the catch net and attach it to the base of a tree like a skirt; officers or bystanders will hold the net only rarely.

Officers then tranquilize the animal, which Myers says is the hardest part of the process.

“It becomes very difficult to get that tranq right so that you can dose the animal safely, without overdosing the animal, or without underdosing in the animal,” Myers says. “Either one of those are fraught with major danger. It's really sometimes more of an art than a science. But [it takes] a lot of experience to make that right.”

Without a catch net, officers try to tranquilize the animal in a position so it either doesn’t fall or it gives officers time to scramble up the trunk and grab it before it hits the ground or a major tree limb. Without the proper catch net, Myers has resorted to using alternatives like fir boughs or ⁠— in an incident in a dump yard ⁠— an old mattress. Regardless, it’s an adrenalized affair.

Myers says the most important tool ⁠— and the one officers spend most of their time on ⁠— is educating people on how to better coexist with wildlife, including ways to avoid inadvertently attracting large carnivores to human-populated areas.

“Most often it’s not an animal problem, it’s a people problem,” Myers says. “People's knowledge and understanding of wildlife and natural resources in the state of Washington are what really matter. If they have a little 5-acre hobby ranch on the outskirts of town that butts up against a heavily forested area, it’s like ringing the dinner bell to a predator such as a cougar who's passing by.”

Education can take the form of one-on-one consultations or even Karelian Bear Dog demonstrations.

Both of these activities are harder to accomplish during a physically distanced pandemic. The Mountain Lion Foundation also is creating online educational films and workshops.

“Those are the things that really kind of charge my batteries, when you can help people [understand],” Myers says. “It accomplishes so much more than us rushing out to a scene and having to do the extreme [thing] of removing this animal from a situation in which it did nothing wrong ⁠— to now have to traumatize it, potentially hurt it or kill it. What did you solve? You solved nothing. So I love education for that reason alone. It is oftentimes a lifesaver for these animals and for our resources.”