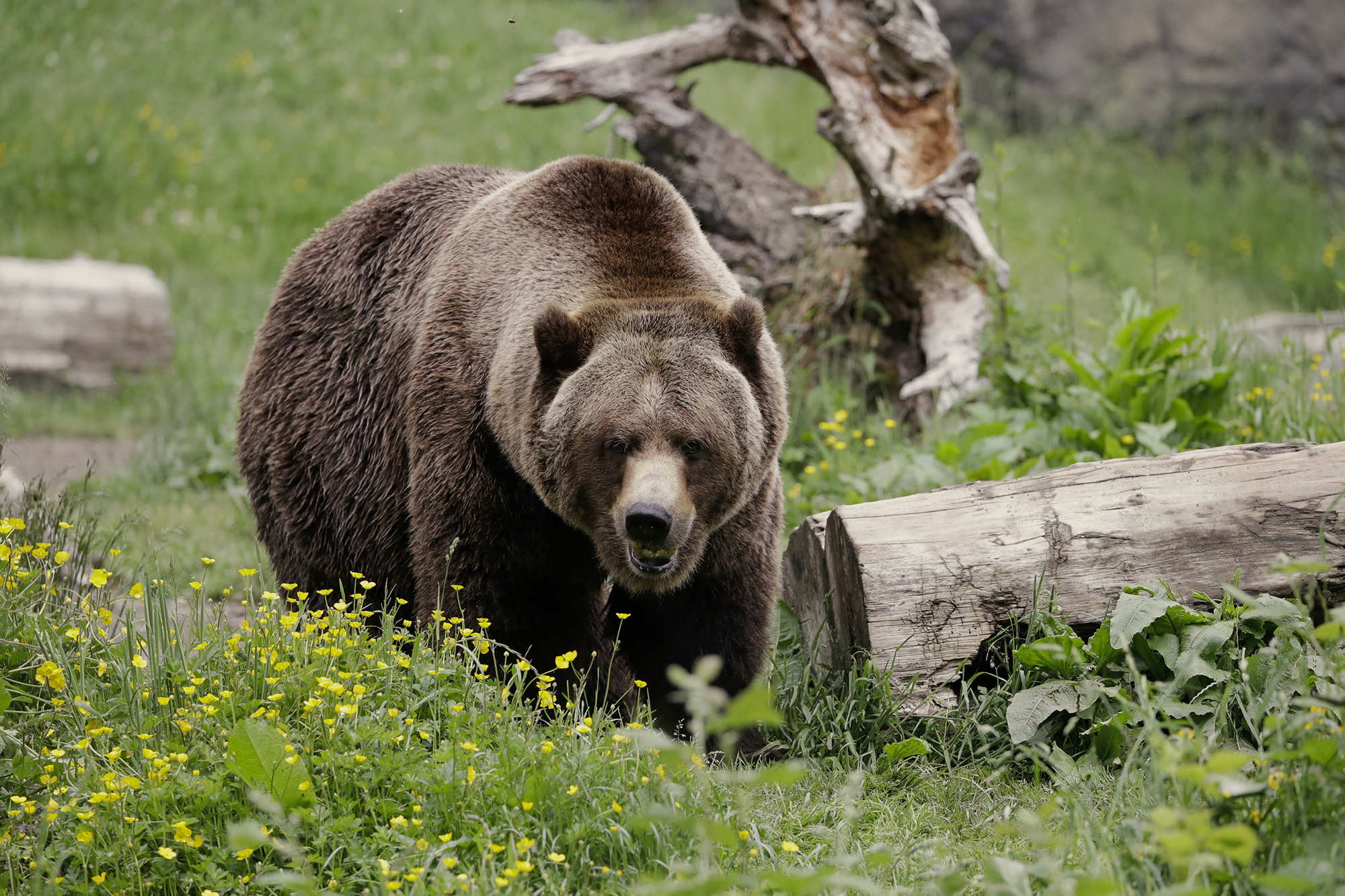 In this May 26, 2020, file photo, a grizzly bear roams an exhibit at the Woodland Park Zoo, closed for nearly three months because of the coronavirus outbreak in Seattle. Grizzly bears once roamed the rugged landscape of the North Cascades in Washington state but few have been sighted in recent decades. The federal government is scrapping plans to reintroduce grizzly bears to the North Cascades ecosystem. (AP Photo/Elaine Thompson, File)

While the prospect of returning grizzly bears to the North Cascades picked up steam in recent years with support from Ryan Zinke, former secretary of the Department of the Interior, the Trump administration surprised grizzly advocates and researchers last week with an abrupt termination of the project.

Advocates and researchers say the administration’s rationale for the move flies in the face of science and public sentiment.

“We have eliminated grizzly bears from 97% of their range in the lower 48 states, and in most of those areas it is impossible for grizzlies to ever live there again because of the impacts of humans,” says the University of Montana’s Dr. Chris Servheen, who served as the U.S. Fish and Wildlife Service’s grizzly bear recovery coordinator for 35 years. “The North Cascades is one of the few places where there is sufficient habitat and space for a healthy grizzly population to return.”

Hope isn’t lost for these apex predators, which serve critical ecosystem functions and hold an important place in local tribal nations’ culture. But what’s next for grizzly advocates is up in the air.

Chase Gunnell, communications director of Conservation Northwest, says the organization is sorting through what the termination order means under the National Environmental Policy Act, and how that squares with the Endangered Species Act’s mandate to recover grizzly bears in ecosystems where they are present and threatened. Given that bears haven’t recovered in the North Cascades on their own over the past three decades, the Endangered Species Act provides legal grounds for assistance. But “for now it's essentially a permanent stop-work order, and that's really disappointing to us,” Gunnell says.

“It’s definitely putting us on the defensive, instead of supporting what was a good and positive project and step forward,” adds Andrea Santarsiere, a senior attorney with the Center for Biological Diversity who has worked on grizzly issues for nearly a decade.

Bernhardt claimed in a press release that the Obama administration’s environmental review process for an updated restoration plan was conducted “without comprehensive public involvement and engagement,” and that later Trump administration briefings and comment periods yielded “overwhelming opposition.”

Without the termination, the department would have been required to complete an environmental impact statement assessing the best way to reintroduce out-of-state grizzlies to Washington’s 9,800-square-mile North Cascades ecosystem, which scientists say could support 250 to 300 bears. Scientists estimate there are fewer than 10 grizzlies in the North Cascades, and they may be functionally extinct; if any grizzly bears remain, they are both too far removed and genetically isolated from neighboring grizzly populations to recover on their own. Scientific analysis has determined that relocating grizzlies from outside the state is necessary to bring back the population.

“The [environmental impact statement] process is to involve the public in how to restore grizzlies to the North Cascades, not to decide if grizzly bears should be recovered,” Servheen says. “The decision made by the secretary of interior is pure politics and is wrong.”

Gunnell says there has long been strong statewide support for grizzly reintroduction, including in Central Washington. Conservation Northwest obtained copies of all 143,000 environmental impact statement public comments in 2019 from the National Park Service, which showed at least 90% favored grizzly restoration.

“We understand [...] the need to put a priority on public safety, but would hope that people also see the value of protecting the magnificent creatures in their historical ranges,” Scott Schuyler, natural resources director of the Upper Skagit Indian Tribe, says via email. “The Upper Skagit people have respected and coexisted with all creatures great and small residing in the Upper Skagit Valley, including the grizzly bear and wolf for nearly 10,000 years pre-contact. This cultural value for the landscape and its inhabitants is something we hope people understand and embrace.”

While Bernhardt says grizzlies are “not in danger of extinction,” they have been listed as endangered in Washington state since 1980, and the state’s most recent review recommended maintaining that status. The North Cascades Ecosystem includes six grizzlies in British Columbia, but none confirmed in Washington. The only confirmed grizzlies in the state are in the Selkirk Recovery Zone on the border of Washington, British Columbia and Idaho. Of an estimated 50 to 60 animals, about 12 reside in Washington. These bears also face threats from humans, as well as low population numbers.

“For the Trump administration to put the ice on this ... and then blatantly lie in their statement that there was not public support … and to do it under the cover of a global pandemic and social unrest with little notice to even agency scientists who've been leading the process, let alone conservationists like myself, it was really a punch in the gut,” Gunnell says.

“Anytime that you have a piece of the system missing, it has cascading effects … and they have been missing for a while,” says Hannah Anderson of the Washington Department of Fish and Wildlife, who serves on the International Grizzly Bear Committee’s executive committee.

Opening up the North Cascades to grizzlies would double the existing range of the bear in the lower 48 states. With comparatively few visitors, reintroduction efforts would be easier than in popular places like Yellowstone or Glacier national parks.

“Federal grizzly bear recovery plans are clear that you can't just put all your eggs in the basket of the northern Rockies,” Gunnell says. “[It] doesn’t have any bearing on the North Cascades.”

This isn’t the first grizzly recovery project to stall out. The Selway-Bitterroot recovery plan halted in 2001 after facing local pushback. But there was never a formal termination notice— the interior department simply stopped taking action.

“That process was also stopped by a short-sighted political decision, just like what just happened in the North Cascades,” Servheen recalls.

Conservation advocates say they aren’t giving up on grizzly reintroduction.

“What the next step is going to be, whether legal, political or otherwise, is not clear at this point, but there's certainly avenues available,” Gunnell says.

Many tribal nations have passed resolutions and drafted letters in favor of grizzly restoration — including efforts by the Okanagan Nation Alliance, the Yakama Nation, the Snoqualmie Tribe and others.

Advocates are also focusing on bolstering citizen support. Conservation Northwest says it will continue engaging with recreationists and ranchers around the North Cascades, in tandem with partners in British Columbia, through outreach programs that teach coexistence and safety practices. The coronavirus crisis restricts how much outreach can be done in person.

Regardless, Gunnell is holding out hope.

“We don't see this train as being fully stopped but more delayed,” Gunnell says. “We're confident that the Endangered Species Act will prevail. But clearly this is a big setback.” 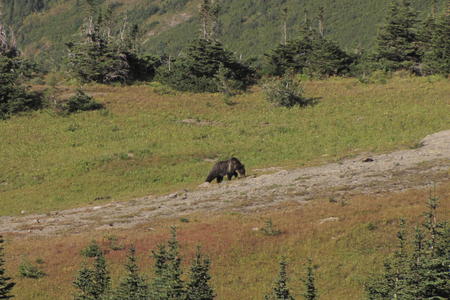 UW and USGS scientists get closer to predicting where grizzlies roam by tracking huckleberry habitat by satellite and on foot. The results could help bear reintroduction in the North Cascades. 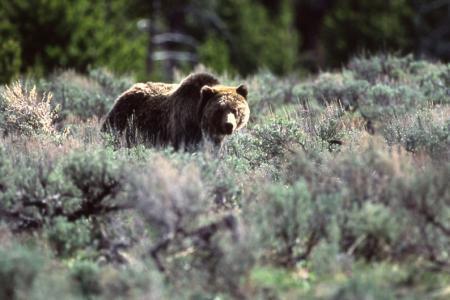 The Trump administration is suspending efforts to bolster the grizzly bear population in Washington's North Cascades. That would leave this part of the mountain range with fewer than ten of the...

UW and USGS scientists get closer to predicting where grizzlies roam by tracking huckleberry habitat by satellite and on foot. The results could help bear reintroduction in the North Cascades.

The Trump administration is suspending efforts to bolster the grizzly bear population in Washington's North Cascades. That would leave this part of the mountain range with fewer than ten of the...