Other states are allowing electronic signatures to count on election petitions during the pandemic. Should Washington do the same? 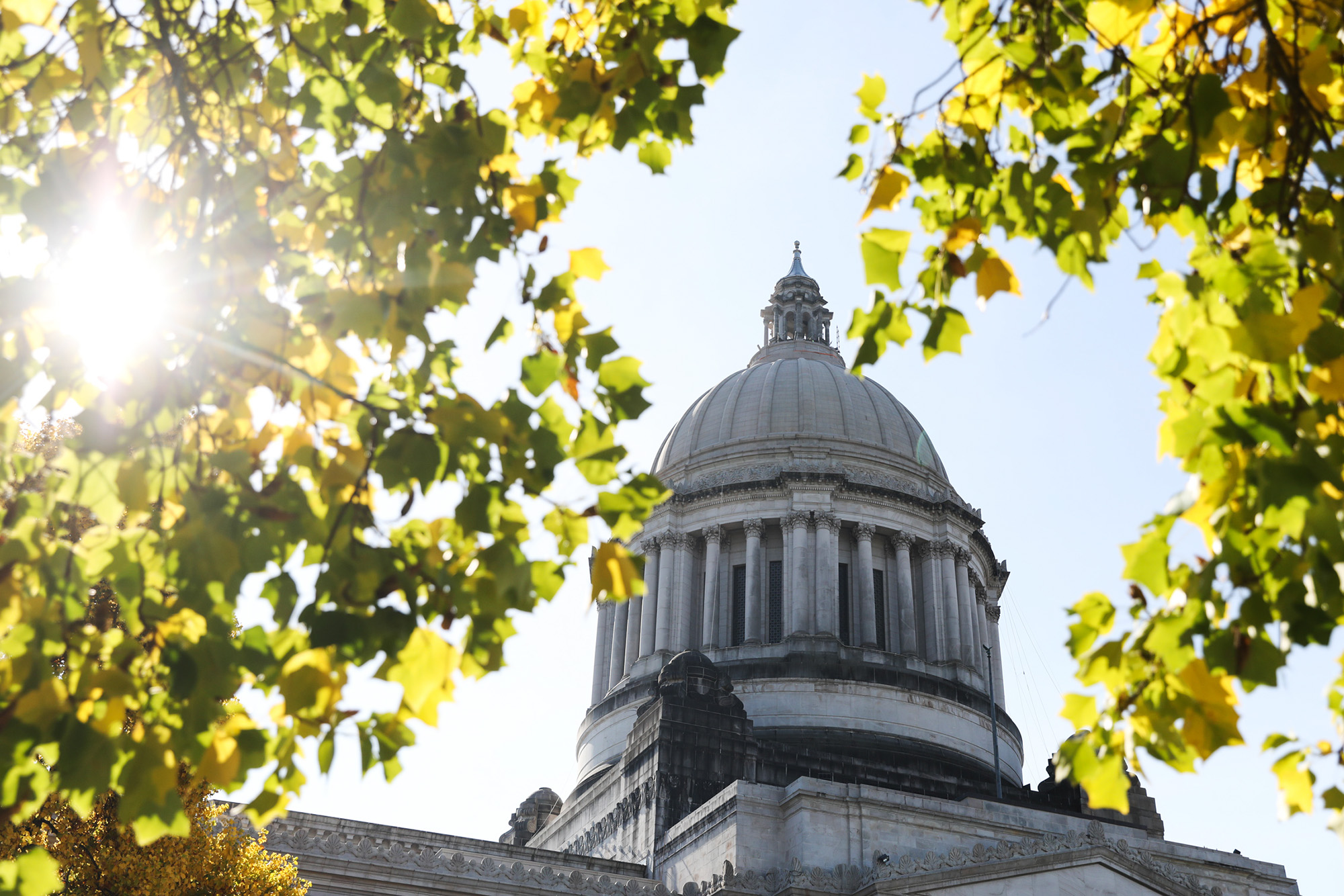 In this 2018 file photograph, the Washington State Capitol building is seen in Olympia. The state's top elections official is fielding questions about whether electronic signatures can be used to help qualify a measure for the November ballot, or whether voters must sign initiative petitions with a pen and paper. (Matt M. McKnight/Crosscut)

Normally around this time of year, Washingtonians would see bright-eyed signature gatherers posted outside grocery stores, at farmers markets and on busy sidewalks, asking people to sign petitions in support of one ballot measure or another.

But COVID-19 has thrown a pandemic-sized wrench into that process.

Flagging down people in public places is no longer a safe or practical way to collect the tens of thousands of signatures required to qualify a measure for the ballot.

Supporters of Initiative 1776, a new attempt to relax Washington’s ban on affirmative action in state programs, say Washington state law already allows online signatures to count in ballot campaigns, as long as voters sign their names with a finger or a stylus, rather than by typing.

This week, the campaign criticized staff in Washington Secretary of State Kim Wyman’s office for suggesting that might not be a correct interpretation of the law.

“We are following the law,” said Jesse Wineberry, the I-1776 campaign’s co-chair. He said confusion over whether online signatures will be accepted has hurt the campaign’s ability to collect signatures in the final days before Thursday’s deadline to submit them.

About 260,000 valid signatures are required for an initiative to go on the November ballot.

In addition to accepting digital scans of signed petitions, the I-1776 campaign is collecting signatures through the online program DocuSign, which allows people to sign their name without ever printing out a form.

At least one state lawmaker thinks the I-1776 campaign has raised a good point. State Rep. Zack Hudgins, D-Tukwila, wrote Wyman last week asking if she could publicly declare that online signatures, like those collected through DocuSign, would count toward the petition signature requirement.

Hudgins said that, in his view, the part of state law that says signatures have to be “handwritten” doesn’t mandate that those signatures actually be made with pen and ink.

Reached by phone Monday, Wyman said that although her office’s initial advice was that a physical, “wet” signature with a pen was required, she isn’t definitively saying she will reject all petitions submitted in a different format.

Her staff’s guidance that petitions must be signed pen to paper was based on how initiative campaigns have functioned in Washington state for more than a century, she said.

“At this point our interpretation is that is how it is done,” said Wyman, a Republican now in her second term.

However, Wyman added, “It is really hard to say what we are or aren’t going to accept when we haven’t seen what they are going to turn in yet.”

She said even petitions signed, scanned and sent as a series of email attachments could be challenged under certain circumstances — for instance, if voters couldn't read the initiative's full text and an accompanying affidavit when they signed.

“The devil’s in the details,” Wyman said.

Other campaigns have also gotten creative about gathering signatures during the pandemic, but haven’t gone the route of submitting electronic signatures.

Referendum 90, a campaign seeking to repeal a sex-education law recently passed by the Legislature, turned in more than 260,000 signatures earlier this month and successfully qualified the referendum for the November ballot.

Some signatures in support of R-90 were collected through drive-through signing events, according to the campaign's website and Facebook page. The R-90 campaign site mentioned only one option for remotely submitting signatures: sending petitions through the mail.

The R-90 campaign didn’t respond to an email or a voicemail message seeking comment.

Given the complications of collecting signatures during a public health crisis, however, the campaign has decided it will no longer seek to place the measure on the ballot in November, said Christina Blocker, a political consultant working with the campaign. The I-1715 campaign instead plans to file the measure later this year as an initiative to the 2021 Legislature, which will allow more time to gather signatures.

Blocker said campaign leaders thought about trying some form of electronic signatures. But they decided to go in a different direction, partly out of concerns about whether all voters had equal access to an online signature option.

“Not everyone has a stylus,” Blocker said.

What’s more, a digital signature made with a finger could differ significantly from the signature a registered voter has on file, Blocker said. That issue could make it difficult for elections officials to verify petition signatures as valid, she said.

“The elections office has to make sure it matches the original signature, and when you do it with your finger versus a stylus, it is vastly different,” Blocker said.

To differing degrees, some other states have started accepting electronic signatures during the pandemic. In April, New Jersey Gov. Phil Murphy issued an order requiring signatures on election petitions to be submitted through an online form.

Wyman, Washington's secretary of state, said she is happy to talk to legislators about changing the law if that is something they want to pursue. In 2018, the Legislature didn’t take action on a bill sponsored by Hudgins, the Tukwila lawmaker.

At the same time, Wyman said legislators should also consider other possible effects — such as whether allowing electronic signatures could make it easier to qualify ballot measures, leading to many more initiatives and referendums being sent to voters. Already, she noted, some legislators have criticized the state’s nonbinding tax advisory votes — which don’t have any practical effect — as cluttering up the ballot and causing confusion.

“What does our ballot look like, potentially, if we have 20 initiatives on the ballot?” Wyman asked. “Those are all important policy discussions that need to happen.”

This story was updated to add information about in-person signing events held by the R-90 campaign.