A new statewide Crosscut/Elway poll shows support for police reform, but fear of defunding the police. 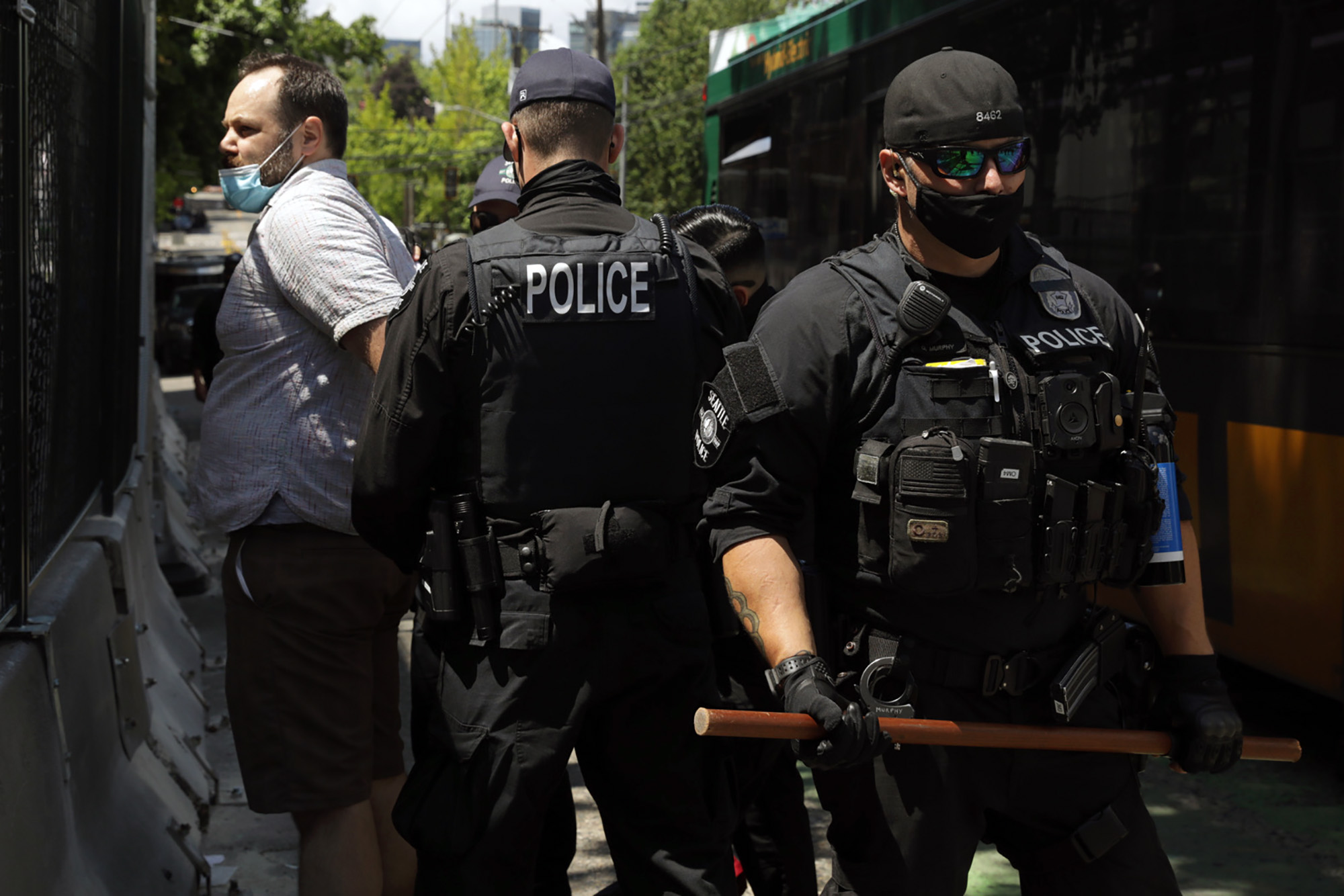 A demonstrator is arrested by Seattle police during a protest outside of the East Precinct in Seattle’s Capitol Hill neighborhood, July 4, 2020. (Matt M. McKnight/Crosscut)

Voters in Washington see the killing of George Floyd in Minneapolis as a sign of systemic issues with how police treat African Americans, but they nevertheless have a favorable view of law enforcement in their own communities, according to a new Crosscut/Elway Poll.

More than half of respondents to the statewide poll, conducted over five days beginning July 11, support the ongoing protests; voters also stand behind incremental reforms like banning chokeholds. Fifty-seven percent believed Floyd’s death was not an isolated incident.

But the divide between how survey respondents view the institution of policing in America broadly compared with the officers who work in their hometowns bears out in several ways.

Despite belief that there are larger problems in policing, nearly half of respondents said they believed their local police treated everyone equally and that race made no difference when it came to use of deadly force — a contrast to national polls that show the inverse.

Just over a third said they believed the police departments in their communities favored white people and were more likely to use deadly force against people of color.

“There’s a difference between what you see on the nightly news and what you see when you walk down main street,” said pollster Stuart Elway. He compared the effect to when people give poor ratings to Congress, but positive ratings to their congressperson.

Additionally, he said, many people in Washington live in racially homogeneous communities, which increases the likelihood they’d believe their department treats everyone equally. 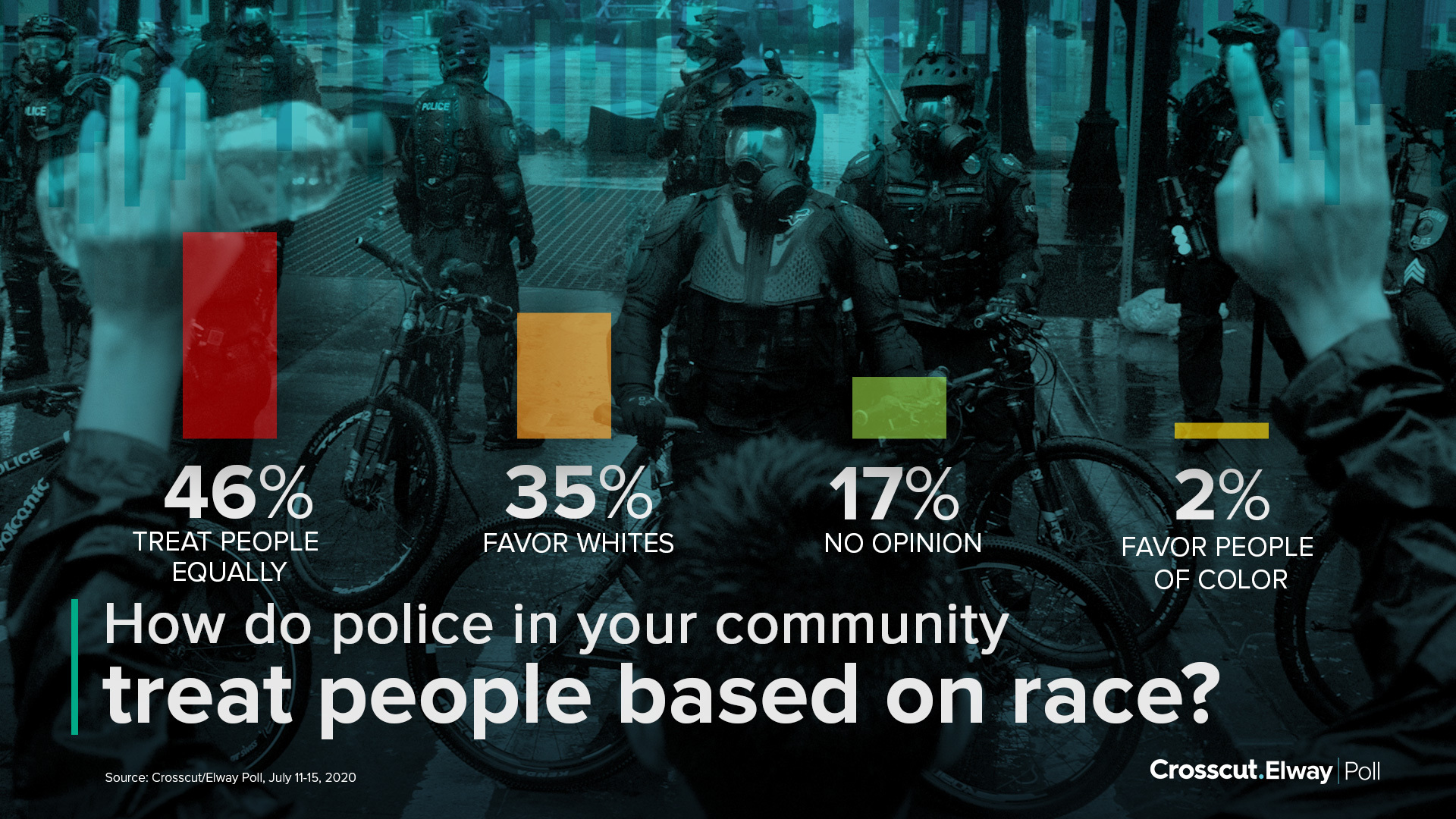 Floyd’s death at the hands of a Minneapolis police officer has set off a reckoning with policing in America, an institution that data shows disproportionately impacts the lives of Black people and people of color. The video of Floyd’s death was the catalyst, but the nerve it touched has been agitated for decades.

Protests have popped up across Washington state, but the bulk of the attention has fallen on Seattle, where demonstrators took over six blocks on Capitol Hill outside of the East Precinct police station for several weeks. More recently, attention has turned to Portland, where video has recorded unidentified federal law enforcement officers arresting protesters.

The protests’ influence on policy has been enormous. In Seattle, the once fringe calls to “defund the police” have taken root in City Hall. Elected officials who months ago supported growing the Seattle Police Department have now expressed support for cutting its budget by as much as 50%.

Across Washington, meanwhile, support for dismantling or defunding the police is weak. Just 26% said they favored “dismantling the police force and starting over with a new model of what police are supposed to do in the community.” Even fewer — 17% — said they supported cutting the budgets of police departments by 50%.

The Crosscut/Elway Poll surveyed 402 registered voters and has a sampling error of plus or minus 5% at a 95% level of confidence, which means that if the survey had been conducted 100 times, the results would be within 5 percentage points of the results reported here at least 95 times.

In total, 72% rated their local police departments as doing a “good” or “excellent” job.

“I think that defunding the police department is nuts, absolutely nuts,” said Thelma Hutchison of Lynnwood.

Hutchison, 83, has lived in her home with her husband for 60 years and said she’s always had very positive interactions with local police. She was horrified by the death of Floyd, but said the blame should fall only on the officer, Derek Chauvin, and not police writ large.

“No person with any thoughts on the matter would blame the rest of the police department for one man’s problem,” she said.

The polling suggests, however, increased support for the goals of those calling for defunding police. When asked about “taking funding from the police force and investing those funds in social services and community programs” — a driving goal of many who call for defunding the police — 45% said they supported that approach, compared with 49% who opposed it.

To the public, defunding or dismantling police “looks too drastic,” said Elway. “But,on the other hand, you’ve got substantial support on redirecting police funding, so people are open to that idea.”

Kira Barker of Spokane said her interactions with police have been fine. But she said she believes that’s because she’s white and acknowledges that her friends of color have much different experiences.

When Barker first heard the phrase “defund police,” she didn’t support it. But that shifted as she looked into the ideas more.

“I support having a radical redistribution, not just of funds, but of responsibilities,” said Barker, 40, who runs her own floral arrangement business.

The polling shows dramatic differences of opinion depending on where in Washington voters live, as well as their political affiliation. Although the sample sizes become too small to make broad-based conclusions, the data suggests that people in the Seattle area and those who identify as Democrats are far less likely than Republicans to believe that police treat everyone equally. They are also more likely to support the ongoing protests and dramatic changes to policing.

A separate poll, paid for by the grocery workers union UFCW21 and conducted last week by Patinkin Research, showed that nearly half of Seattle voters somewhat or strongly supported “reallocating 50% of the Seattle Police budget to community services.” Forty-four percent opposed.

Andy Luedke, a Microsoft developer who lives in unincorporated King County, said he had always questioned whether police were the best people to respond to certain situations. But, for him, the protests have solidified his support for moving money away from police to support better alternatives.

“I could definitely get on board with the idea that if the police don’t have the money to buy all this pretty intense riot gear and weapons and canisters and putting more officers on the streets, then that money could instead be used to fund social programs,” he said.