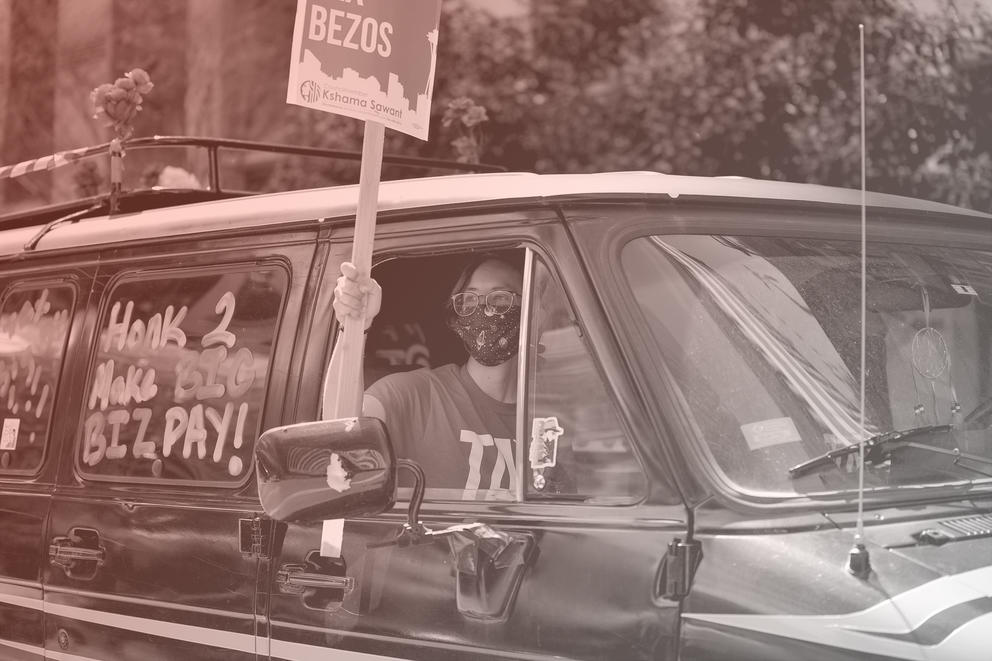 Proponents of a plan to tax Amazon and other large corporations to help fund COVID-19 relief and affordable housing wave signs in a caravan through downtown Seattle, May 01, 2020. (Damairs Carter/MediaPunch/IPX)

It’s too early to start running victory laps, but Seattle is very close to scoring a major win for progressive tax reform. Instead of discussing whether or not to fund COVID-19 relief and affordable housing by taxing large corporations, for two weeks now the Seattle City Council has been debating the relative merits of two different approaches: the “Amazon Tax” put forward in April by Councilmembers Kshama Sawant and Tammy Morales  and the “Jumpstart Seattle” plan unveiled June 16 by Councilmember Teresa Mosqueda. (Disclosure: Through my work with the Transit Riders Union, I’ve been active in advocacy related to these proposals.)

On the tax side, the two proposals differ most obviously in the revenue they generate ($500 million vs. $200 million annually), and the fact that Jumpstart would sunset after 10 years unless renewed. But there’s also a significant difference in how the two taxes are structured. The Amazon Tax is based on a company’s total payroll. Jumpstart, by contrast, taxes only payroll corresponding to salaries over $150,000. The concept is modeled after House Bill 2907, introduced by Rep. Nicole Macri, D-Seattle, in the state Legislature earlier this year. But, unlike the state bill, Jumpstart sets higher rates for payroll corresponding to salaries over half a million, and for an upper tier of extremely large businesses, assumed to include Amazon and perhaps a few others.

Read more from Katie Wilson: What defunding Seattle Police could like

Jumpstart bills itself as “A Progressive Payroll Tax on Large Corporations Paying High Salaries,” in which “Bigger Corporations with Higher Salaries Contribute More.” But in a June 24 press release, the “Tax Amazon” campaign put forward a different interpretation. Jumpstart, it said, “includes a big business exemption benefiting those who pay their employees lower wages,” which is “regressive and will disproportionately benefit low-wage employers.” Despite some initial sparring, the councilmembers seemed eager last week to display their agreement that both taxes are, in fact, extremely progressive, and to emphasize that corporations, not employees, would pay.

From a political perspective, all of this is water under the bridge: Mosqueda’s version, with five co-sponsors, is now the base legislation, and Wednesday the council is expected to vote on amendments. But from an economics perspective, this confusing episode raises an interesting question: What does it mean for a business tax to be more or less “progressive”?

By definition, a tax is progressive to the extent that its relative burden rises with income. The Institute on Taxation and Economic Policy has repeatedly named Washington as the state with the most regressive tax system. This is largely due to our lack of an income tax, which has led to an extreme dependence on sales and excise taxes. You might think the sales tax is “flat,” since everyone pays the same rate — in Seattle, 10.1%. In fact, it’s highly regressive, because poor people spend far more of their income on taxable goods than rich people do. ITEP estimates that, in Washington, general sales tax on consumer purchases eats up 4% of income for the poorest fifth of households, compared with only 0.6% for the wealthiest 1%.

ITEP uses a “microsimulation tax model” that estimates how various taxes ultimately impact people of different incomes, regardless of what entity initially pays the tax. For example, “property taxes on rental property are distributed partly to property owners and partly to tenants.” Taxes on corporate profits, on the other hand, fall mostly “on owners of corporate stock, and about a quarter is assumed to fall on workers in the form of lower wages” — though, for large corporations, this effect is diluted by being spread across many states.

Most advocates of progressive tax reform would be thrilled to tax corporate profits, or net income, but we’re hampered by the same Washington state Supreme Court decisions that, for now, stand in the way of a progressive personal income tax. Instead, since 1932, our state’s main mechanism for taxing business is the business and occupation tax. The B&O tax is based on gross receipts — a business’ total revenue, regardless of expenses. This means businesses with low profit margins, like wholesalers and grocery stores, are penalized more heavily than are high-margin businesses, like high-end retailers and legal services. Low-margin businesses are, in general, less able to absorb additional costs, and so are more likely to try to push taxes along in higher prices or lower wages. As currently structured, the B&O tax therefore has a regressive impact on individual households; it hits lower-income consumers and workers harder than high-income shareholders.

In general, a more progressive business tax is one whose costs ultimately fall more on capital and its beneficiaries in the form of lower profits, dividends, executive bonuses, etc.; or, to the extent that costs are passed to customers or workers, these are higher-end customers and higher-income workers. By contrast, a less progressive business tax is one whose costs fall significantly on lower-income customers and workers.

Of course, there are numerous factors that influence prices and wages, beyond what businesses pay in taxes and other expenses, so this ends up being a somewhat complex economics question. It’s also a political question — whenever the subject of taxing corporations comes up, business lobby groups like the Seattle Metropolitan Chamber of Commerce and the Downtown Seattle Association whip out the old “tax on jobs” slogan and warn of regressive impacts. Such posturing should be taken with a strong dose of skepticism.

What does this mean for Jumpstart Seattle and the Amazon Tax? Both exempt businesses with Seattle payroll under $7 million; not all small businesses struggle, of course, but enough do that some lower threshold seems prudent. A basic payroll-based tax probably lies between the B&O tax and a corporate profits tax in the costs ultimately passed to consumers or workers. This is most likely to happen in industries with high labor costs and low profit margins, like restaurants and grocery stores. Both proposals exempt grocery stores. But Mosqueda’s Jumpstart plan, by focusing on high salaries and tilting the tax toward the largest corporations, greatly reduces the potential for tax costs to be passed on. Insofar as they are, it’s more likely that high-paid workers and high-end consumers will pick up the tab, not low-income households.

In the end, both proposals are progressive, but I think it’s clear that Jumpstart Seattle is built around the more progressive tax structure. (Ironically, it’s also more of an actual Amazon tax —  Amazon may be the only business that would pay more under Mosqueda’s plan than under the Sawant-Morales plan.) However, with Jumpstart’s much lower revenue haul — $200 million vs. Sawant-Morales’ $500 million — one can argue that it still leaves us with an overall more regressive tax system than would the Amazon Tax, as well as less prepared to meet the immense challenges of our affordable housing crisis and the COVID-19 recession.

One final word: Don’t forget that in 2018 we were battling over big business tax legislation introduced at $75 million in revenue and negotiated down to $47 million before it was passed and swiftly repealed. I’m prepared to call anything north of $200 million a spectacular win. 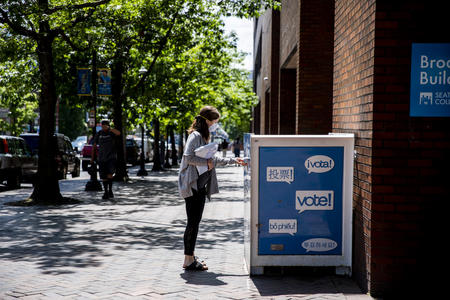 It looks as if Loren Culp will be the Republican candidate for governor, while Democrat Marilyn Strickland was leading the race for an open seat in Congress.