22 books — and their authors — coming to the Crosscut Festival

Who’s coming to the Crosscut Festival? Get to know the speakers by reading their books. 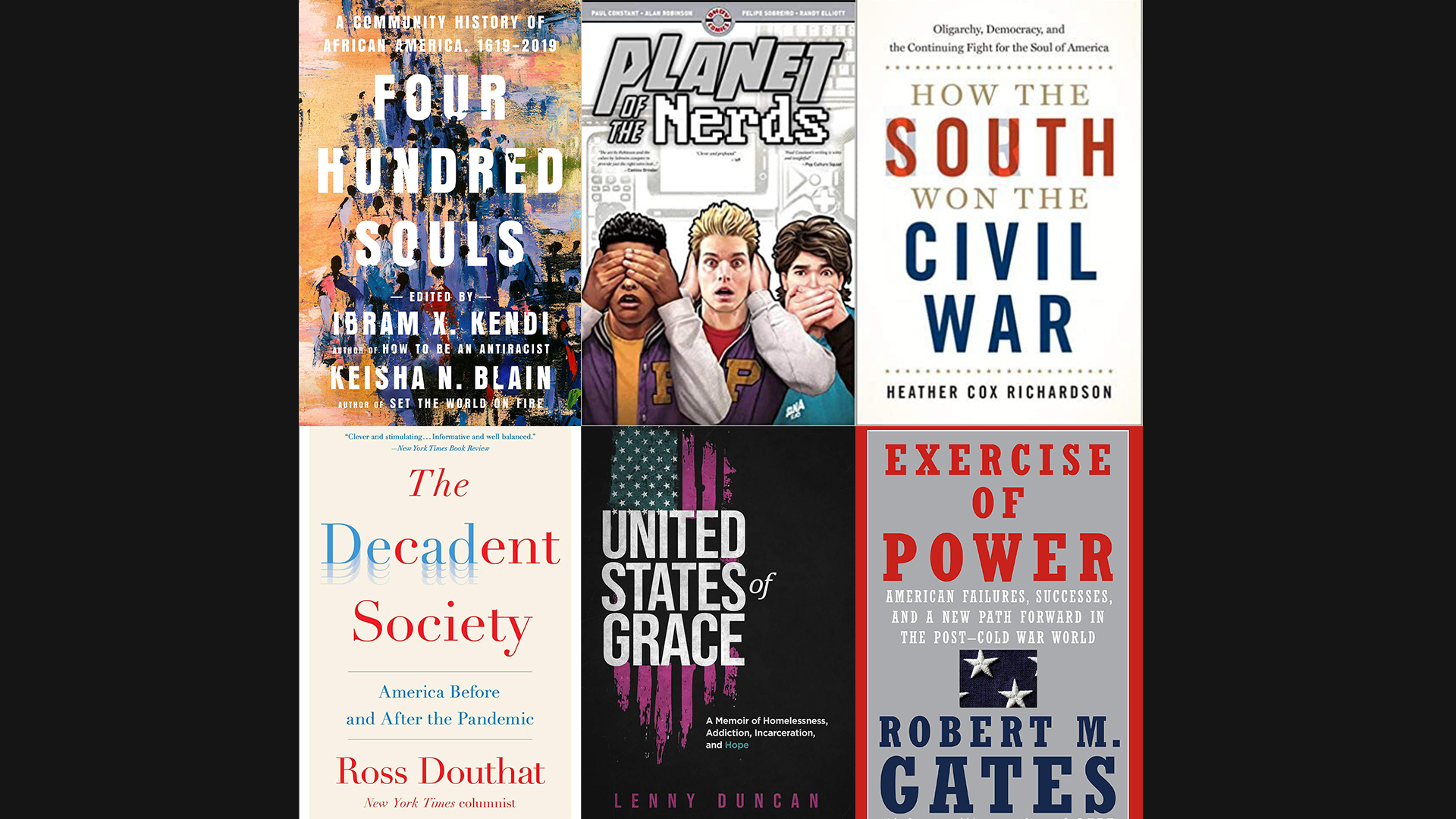 Journalists, politicians, authors and newsmakers from our community and around the nation are coming to the Crosscut Festival. Because we can’t gather together in person just yet, this year’s Crosscut Festival will be a virtual, free event, spanning six days, May 3-8, 2021. (Get tickets now.)

Speakers will take part in thought-provoking conversations, tackling some of the most important issues of our time — from the environment to race and prejudice and from modern politics to the state of journalism. But once the conversations end, the experience doesn’t have to. The ideas and reporting and personalities that bring the festival to life are always available, in articles, online and in deeply researched, engrossing, beautiful books.

Books, in particular, offer a deeper dive in keeping with the festival's aim to entertain "Big Issues & Bold Ideas." The festival’s conversations will give you a taste of the stories, ideas and advice offered by our guests, but these 22 books will immerse you in them.

We have partnered with the Elliot Bay Book Company to sell our speakers’ books. (The descriptions below are adapted from the ones on the Elliot Bay website.)

Here are the 22 books that will keep the Crosscut Festival’s conversations going.

The story begins in 1619 — a year before the Mayflower —  when the White Lion disgorges “some 20-and-odd Negroes” onto the shores of Virginia, inaugurating the African presence in what would become the United States. It takes us to the present, when African Americans, descendants of those on the White Lion and a thousand other routes to this country, continue a journey defined by inhuman oppression, visionary struggles, stunning achievements, and millions of ordinary lives passing through extraordinary history. Get the book.

Planet of the Nerds by Paul Constant

Three high school jocks in the 1980s are accidentally frozen by an experimental cryogenics device, only to be revived in the computer-driven, superhero movie-loving world of 2019 — an era ruled by nerds. Get the book.

How the South Won the Civil War: Oligarchy, Democracy, and the Continuing Fight for the Soul of America by Heather Cox Richardson

While the North prevailed in the Civil War, ending slavery and giving the country a new birth of freedom, Heather Cox Richardson argues in this provocative work that democracy's blood-soaked victory was ephemeral. The system that had sustained the defeated South moved westward and there established a foothold. Get the book.

The Decadent Society: America Before and After the Pandemic by Ross Douthat

Casting a cold eye on these trends, The Decadent Society explains what happens when a powerful society ceases advancing — how the combination of wealth and technological proficiency with economic stagnation, political stalemate, and demographic decline creates a unique civilizational crisis. Get the book. (Read a Q&A with the author.)

United States of Grace: A Memoir of Homelessness, Addiction, Incarceration, and Hope by Lenny Duncan

United States of Grace is a love story about America, revealing the joy and resilience of those places in this country many call the margins but that Lenny Duncan has called home. Get the book.

Exercise of Power: American Failures, Successes, and a New Path Forward in the Post-Cold War World by Robert Gates

From the former secretary of defense comes a candid, sweeping examination of power, and how it has been exercised, for good and bad, by American presidents in the post-Cold War world. Get the book. 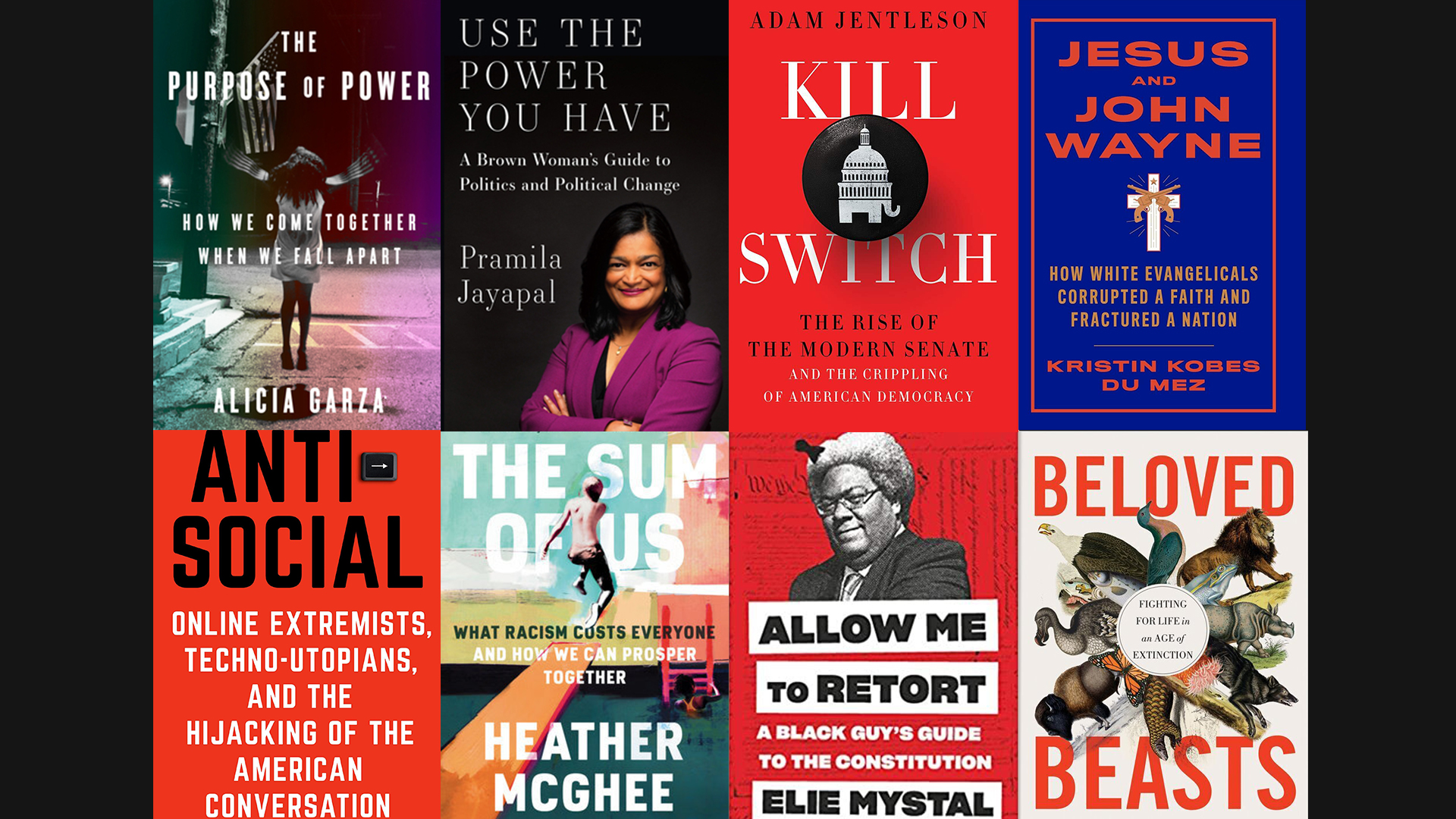 The Purpose of Power: How We Come Together When We Fall Apart by Alicia Garza

Long before #BlackLivesMatter became a rallying cry for this generation, Alicia Garza had spent the better part of two decades learning and unlearning some hard lessons about organizing. The lessons she offers are different from the “rules for radicals” that animated earlier generations of activists, and diverge from the charismatic, patriarchal model of the American civil rights movement. She reflects instead on how making room among the woke for those who are still awakening can inspire and activate more people to fight for the world we all deserve. Get the book.

Use the Power You Have: A Brown Woman’s Guide to Politics and Political Change by Pramila Jayapal

Use the Power You Have is Rep. Jayapal's account of her path from 16-year-old Indian immigrant to grassroots activist to Washington, D.C. Get the book.

Kill Switch: The Rise of the Modern Senate and the Crippling of American Democracy by Adam Jentleson

In Kill Switch, Senate insider Adam Jentleson contends that far from reflecting the framers’ vision, the Senate has been transformed over the decades by a tenacious minority of white conservatives. Get the book.

Jesus and John Wayne: How White Evangelicals Corrupted a Faith and Fractured a Nation by Kristin Kobes Du Mez

A scholar of American Christianity presents a 75-year history of evangelicalism that identifies the forces that have turned Donald Trump into a hero of the Religious Right. Get the book.

Antisocial: Online Extremists, Techno-Utopians, and the Hijacking of the American Conversation by Andrew Marantz

A deeply immersive chronicle of how the optimistic entrepreneurs of Silicon Valley set out to create a free and democratic internet — and how the cynical propagandists of the alt-right exploited that freedom to propel the extreme into the mainstream. Get the book.

The Sum of Us: What Racism Costs Everyone and How We Can Prosper Together by Heather McGhee

Heather McGhee’s specialty is the American economy — and the mystery of why it so often fails the American public. From the financial crisis to rising student debt to collapsing public infrastructure, she found a common root problem: racism. Get the book.

Allow Me to Retort: A Black Guy’s Guide to the Constitution by Elie Mystal

Elie Mystal brings his trademark humor, snark, and legal expertise to topics as crucial to our politics as gerrymandering and voter suppression, and explains why legal concepts such as the right to privacy and substantive due process are constantly under attack from the very worst judges conservatives can pack onto the courts. Get the book.

Beloved Beasts: Fighting for Life in an Age of Extinction by Michelle Nijhuis

In Beloved Beasts, science journalist Michelle Nijhuis traces the movement’s history, from early battles to save charismatic species such as the American bison and bald eagle to today’s global effort to defend life on a larger scale. Get the book. 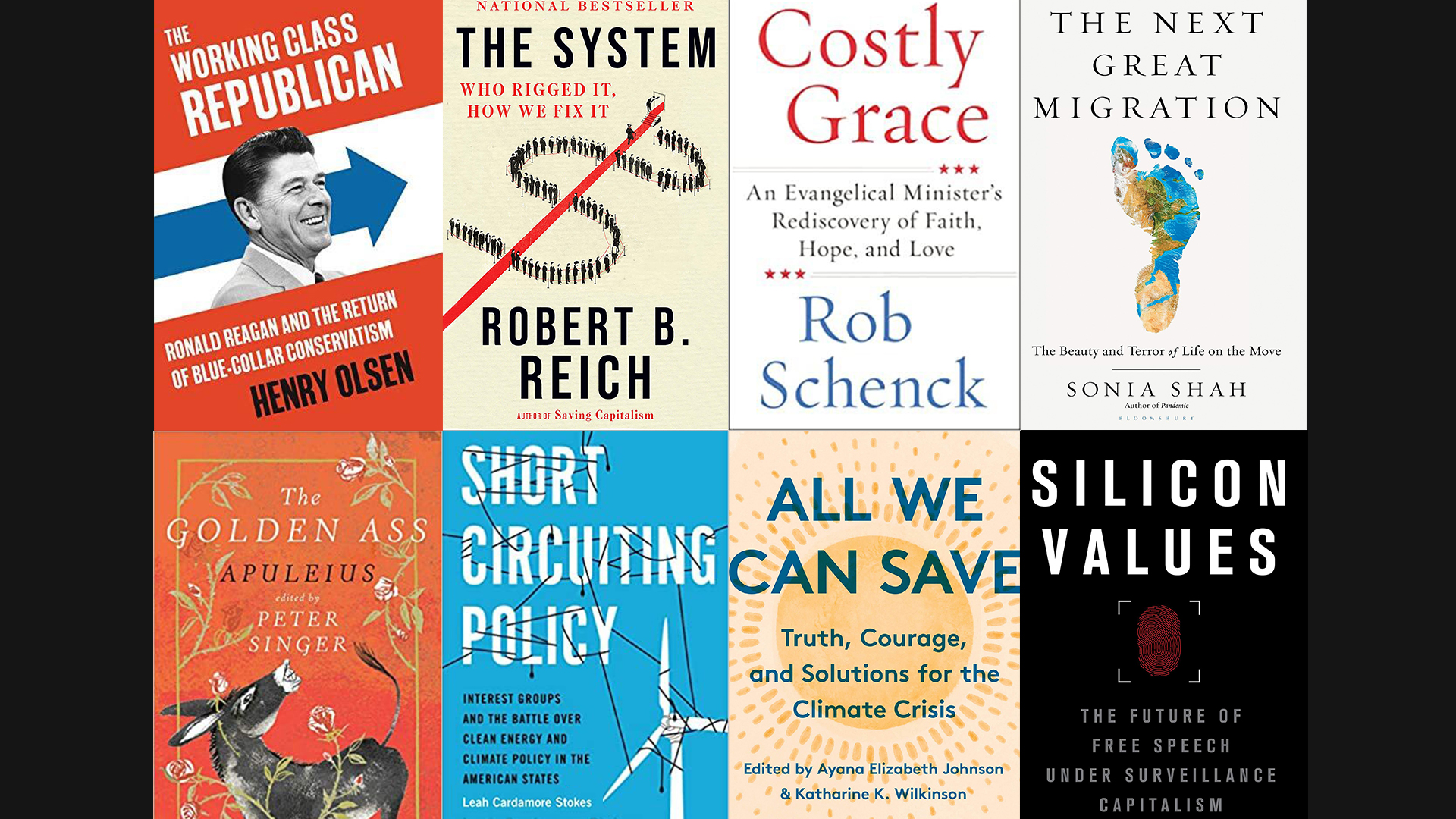 The Working Class Conservative: Ronald Reagan and the Return of Blue-Collar Conservatism by Henry Olsen

Henry Olsen contends that the historical record clearly shows that Franklin Roosevelt and the New Deal itself were more conservative than either Democrats or Republicans believe, and that Ronald Reagan was more progressive than most contemporary Republicans understand. Get the book.

The System: Who Rigged It, How We Fix It by Robert Reich

An urgent analysis of how the "rigged" systems of American politics and power operate, how this status quo came to be, and how average citizens can enact change. Get the book.  (Read a Q&A with the author.)

In this memoir, Rob Schenck reflects on his path to God, his unconscious abandonment of his principles, and his return to the convictions that guide him. Costly Grace is a fascinating and ultimately redemptive account of one man’s life in politics and faith. Get the book.

The Next Great Migration: The Beauty and Terror of Life on the Move by Sonia Shah

Tracking the history of misinformation from the 18th century through today's anti-immigration policies, The Next Great Migration makes the case for a future in which migration is not a source of fear, but of hope. Get the book.

The Golden Ass by Peter Singer

Peter Singer and Ellen Finkelpearl breathe new life into Apuleius’s The Golden Ass — a hilarious, bawdy tale and one of the earliest novels — accentuating its remarkable empathy for animals. Get the book.

Short Circuiting Policy: Interest Groups and the Battle Over Clean Energy and Climate Policy in the American States by Leah Stokes

In 1999, Texas passed a landmark clean energy law, beginning a groundswell of new policies that promised to make the U.S. a world leader in renewable energy. As Leah Stokes shows in Short Circuiting Policy, however, that policy did not lead to momentum in Texas, which failed to implement its solar laws or clean up its electricity system. Get the book.

All We Can Save: Truth, Courage, and Solutions for the Climate Crisis by Katharine Wilkinson

All We Can Save illuminates the expertise and insights of dozens of diverse women leading on climate in the United States — scientists, journalists, farmers, lawyers, teachers, activists, innovators, wonks, and designers, across generations, geographies, and race — and aims to advance a more representative, nuanced, and solution-oriented public conversation on the climate crisis. Get the book.

Silicon Values: The Future of Free Speech Under Surveillance Capitalism by Jillian York

In Silicon Values, Jillian York looks at how our rights have become increasingly undermined by the major corporations’ desire to harvest our personal data and turn it into profit. She also looks at how governments have used the same technology to monitor citizens and threatened our ability to communicate. Get the book.

Don’t miss these speakers and more at the Crosscut Festival, May 3-8, 2021. Get tickets now.