The reporter made famous by Watergate will be a keynote speaker at Crosscut Festival 2022. He'll discuss his new memoir and a call to arms for media in the modern world. 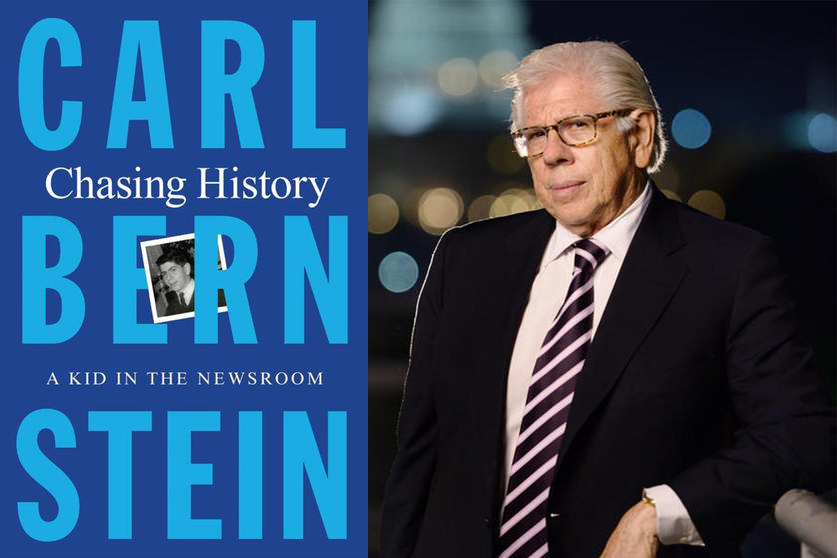 Carl Bernstein discusses a bygone newsroom era in his new memoir and in an upcoming conversation at the Crosscut Festival 2022.

“News is the first draft of history.” Most of us have heard this at one point or another, especially if you have ever found yourself in a journalism class. And, because of the nature of the job, journalists sometimes  find themselves in the middle of history — journalists like Carl Bernstein.

Well before Watergate, Bernstein was a teenager with a job at his hometown newsroom, learning from senior reporters and editors, soaking it all in and chasing the tumultuous history unfolding around him in 1960s Washington, D.C. In Bernstein’s memoir Chasing History: A Kid in the Newsroom, he explains how his journalism career got started — as a 16-year-old copyboy. Bernstein describes himself as a struggling student with a bit of a juvenile record who finally found his place at the Evening Star, the afternoon paper in Washington, D.C.

The book showcases Bernstein’s scrappy start, going from copyboy to dictationist to city desk clerk, earning his stripes as a cub reporter along the way. Chasing History drops the reader into a newsroom during the Kennedy presidency, the space race, the civil rights movement and more. And while the news itself is telling a story of a specific time and place in American history, so is the setting. The newsroom of Bernstein’s beginnings looks very different from the way we write and read the news in 2022.

Bernstein will be discussing this evolution in how we make and receive our news at the Crosscut Festival this May. He will be the keynote speaker at our session, “Breaking News,” a eulogy for print newspapers and a call to arms for media in the modern world. Bernstein will also join us at the festival’s Headliners Gala as our guest of honor on Saturday, April 30. (Interested? Get tickets to Bernstein’s session or the Headliners Gala.)

Before joining Carl Bernstein at the Crosscut Festival, or picking up his book, let’s take a look back at some of the bygone newsroom practices, positions and even the newspaper itself (the Evening Star is long defunct) chronicled in Chasing History.

“The copyboys were the stevedores in the process of moving copy downriver,” Bernstein says in Chasing History. Having gotten his start as a copyboy, he intimately recalls the process as he takes readers on said copy’s journey through the newsroom, ferried by copyboys along the way.

Bernstein details this process in his book: “‘Copyyyyyy!’ the reporter would yell, and whichever of us was next up would run and grab the book of typed copy from the reporter's outstretched arm like taking a baton in a relay race, then sprint back down the center aisle to stacks of wire baskets where we would strip the books of their carbon paper and in almost the same motion flip them, airborne, into the in-basket of the appropriate desk — city, state or national.”

Bernstein describes the wire room at the Evening Star as a room with about 20 teletype machines that received wire stories from the Associated Press, United Press International and more. Stories would come through marked as a “BULLETIN” and “URGENT,” but a huge story that would sound 10 ringing bells was called a “FLASH!” And, yes, Bernstein himself completes the all-caps title with an exclamation point. “FLASH!,” he explains, “was reserved for only the biggest news.”

Bernstein notes that the pencils he received at the newspaper were not like the yellow ones at school. He writes, “These were thick, black, rounded, with no erasers — COPY PENCILS, according to their manufacturer's stamp. They seemed to assume a bold certainty that in other circumstances might have been considered presumptuous.”

In his memoir, Bernstein recalls watching the Linotype machine operator work. He describes the operator as seated at a keyboard, “working from single-take segments of newsroom copy,” transforming words “letter by letter into pieces of metal type fashioned from hot lead.”

Bernstein calls it a “miracle machine.” He writes: “When he struck the key, the lead was in a molten state, and then the machine would magically spit out single lines of solidified hard-set type in word form. Each line stacked itself upon the previous one, the whole stack of type exactly a newspaper column wide.”

Bernstein moved up the ladder from copyboy to dictationist, typing stories that reporters phoned in from near and far. In the book, he discusses how this move made him into something of an apprentice reporter. And, he recounts a piece of American history he typed up in an early draft as a dicationist, the assassination of John F. Kennedy.

These terms, tools and tactics are just some of the many bygone journalism treasures remembered in Chasing History. Find more stories in the pages of Bernstein’s memoir or join him this year at the Crosscut Festival.