Keep the conversations going beyond the festival with books on colonizing space, political polarization, the clean water crisis and more. 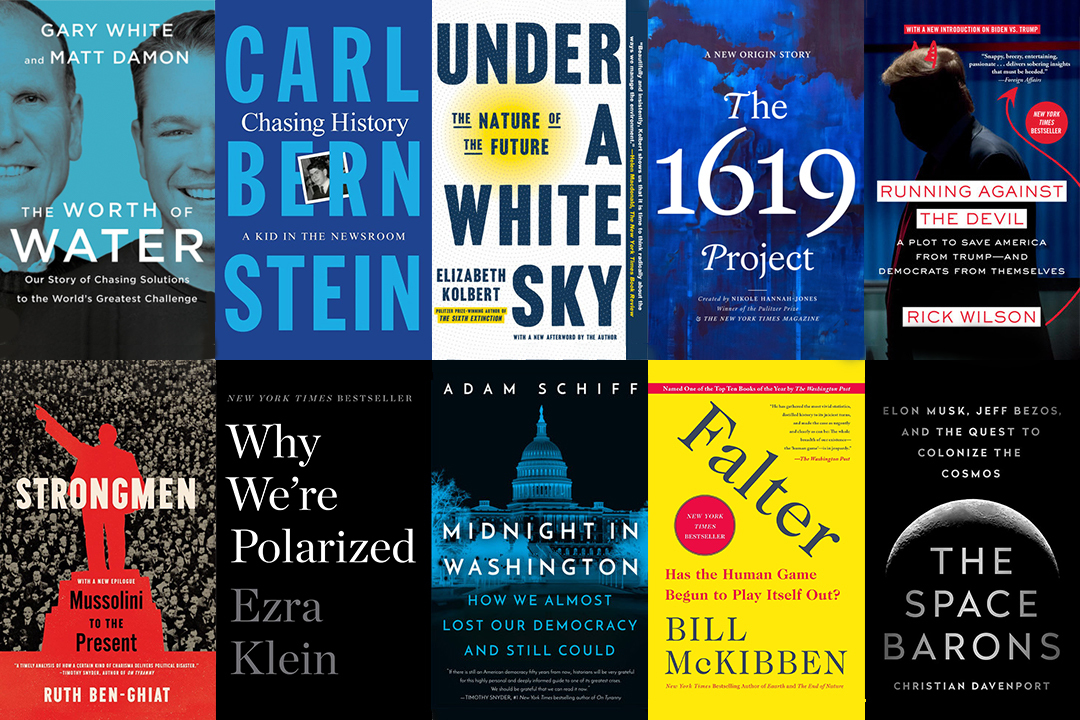 Clean water scarcity, reframing American history to better acknowledge slavery’s impacts, the insurrection and our nation’s political divide: We’ll be tackling these topics and more at the Crosscut Festival, held in a hybrid in-person and virtual format May 3-7. There’s going to be a lot to discuss. And we can keep the conversation going beyond the festival with books written by festival speakers.

Every year, journalists, politicians, authors and newsmakers from our Pacific Northwest community and around the nation come together at the Crosscut Festival to take a hard look at the people, policies and events that shape our lives. (Interested? Get tickets now.) Tackling the biggest issues of our time can be a lot to unpack in just a few days. Luckily, there is a lot of source material to keep the dialogue going beyond the festival. Many of our speakers have written books on the topics they will be addressing.

So, if you want to get to know topics or speakers beforehand, or if you want to find a book after attending the festival, here are 10 books that expand on Crosscut Festival’s conversations.

The Worth of Water: Our Story of Chasing Solutions to the World's Greatest Challenge by Matt Damon Gary White

From the founders of nonprofits Water.org & WaterEquity Gary White and Matt Damon, the true story of two unlikely allies on a mission to end the global water crisis for good. In The Worth of Water, White and Damon take us along on their journey — telling stories as they uncover insights, try out new ideas and travel between the communities they serve and the halls of power where decisions get made. With humor and humility, they illuminate the challenges of launching a brand-new model with extremely high stakes: better health and greater prosperity for people all over the world. Get the book.

Join Gary White and Matt Damon at the Crosscut Festival for the session “Turning on the Faucet.”

The 1619 Project: A New Origin Story created by Nikole Hannah-Jones

The New York Times Magazine’s award-winning “1619 Project” issue reframed our understanding of American history by placing slavery and its continuing legacy at the center of our national narrative. This new book substantially expands on that work, weaving together 18 essays that explore the legacy of slavery in present-day America with 36 poems and works of fiction that illuminate key moments of oppression, struggle and resistance. Get the book.

Join Nikole Hannah-Jones at the Crosscut Festival for the session “Retelling Our History.”

Midnight in Washington: How We Almost Lost Our Democracy and Still Could by Adam Schiff

In Midnight in Washington, Congressman Adam Schiff argues that the Donald Trump presidency has so weakened our institutions and compromised the Republican Party that the peril will last for years, requiring unprecedented vigilance against the growing and dangerous appeal of authoritarianism. Schiff takes us inside his team of impeachment managers and their desperate defense of the Constitution amid the rise of a distinctly American brand of autocracy. Get the book.

Join Adam Schiff at the Crosscut Festival for the session “A Nation on the Brink.”

Falter: Has the Human Game Begun to Play Itself Out? by Bill McKibben

We’re at a bleak moment in human history — and we’ll either confront that bleakness or watch the civilization our forebears built slip away. Falter draws on Bill McKibben’s experience in building 350.org, the first truly global citizens movement to combat climate change, and offers some possible ways for us to move forward. Get the book.

Join Bill McKibben at the Crosscut Festival for the session “Everything in the Balance.”

Why We're Polarized by Ezra Klein

America is polarized, first and foremost, by identity. Everyone engaged in American politics is engaged, at some level, in identity politics. Over the past 50 years in America, our partisan identities have merged with our racial, religious, geographic, ideological and cultural identities. These merged identities have attained a weight that is breaking much in our politics and tearing at the bonds that hold this country together. Ezra Klein shows how and why American politics polarized around identity in the 20th century, and what that polarization did to the way we see the world and one another. Get the book.

Join Ezra Klein at the Crosscut Festival for the session “What’s the Big Idea?”

The Space Barons: Elon Musk, Jeff Bezos and the Quest to Colonize the Cosmos by Christian Davenport

The Space Barons is the story of a group of billionaire entrepreneurs who are pouring their fortunes into the epic resurrection of the American space program. Nearly a half-century after Neil Armstrong walked on the moon, these Space Barons — most notably Elon Musk and Jeff Bezos, along with Richard Branson and Paul Allen — are using Silicon Valley-style innovation to dramatically lower the cost of space travel and send humans even further than NASA has gone. Get the book.

Join Christian Davenport at the Crosscut Festival for the session “Escape From Earth: The Billionaire Space Race.”

Strongmen: Mussolini to the Present by Ruth Ben-Ghiat

Ruth Ben-Ghiat is the expert on the "strongman" playbook employed by authoritarian demagogues, from Mussolini to Putin — enabling her to predict with uncanny accuracy the recent experience in America and Europe. In Strongmen, she lays bare the blueprint these leaders have followed over the past 100 years and empowers us to recognize, resist and prevent their disastrous rule in the future. Get the book.

Join Ruth Ben-Ghiat at the Crosscut Festival for the session “Are Authoritarians Winning?”

Running Against the Devil: A Plot to Save America from Trump — and Democrats from Themselves by Rick Wilson

Rick Wilson combines decades of national political experience and insight in his take-no-prisoners analysis, hammering Donald Trump’s destructive and dangerous presidency in a case-by-case takedown and describing the terrifying prospect of four more years of Trump. Get the book.

Join Rick Wilson at the Crosscut Festival for the session “Political Power Play.”

Under a White Sky: The Nature of the Future by Elizabeth Kolbert

In Under a White Sky, Elizabeth Kolbert takes a hard look at the new world we are creating. Along the way, she meets biologists who are trying to preserve the world’s rarest fish, which lives in a single tiny pool in the middle of the Mojave; engineers who are turning carbon emissions to stone in Iceland; Australian researchers who are trying to develop a “super coral” that can survive on a hotter globe; and physicists who are contemplating shooting tiny diamonds into the stratosphere to cool the Earth. Get the book.

Join Elizabeth Kolbert at the Crosscut Festival for the session “Hacking the Climate Crisis.”

Chasing History: A Kid in the Newsroom by Carl Bernstein

In this triumphant memoir, Carl Bernstein, the Pulitzer Prize-winning co-author of All the President’s Men and pioneer of investigative journalism, recalls his beginnings as an audacious teenage newspaper reporter in the nation’s capital — a tale of scrapes, gumshoeing and American bedlam. Get the book.

Join Carl Bernstein at the Headliners Gala and for the session “Breaking News.”