From Google’s a cappella group Googapella to Facebook’s jazz ensemble, it’s difficult to find a tech company without a music group. 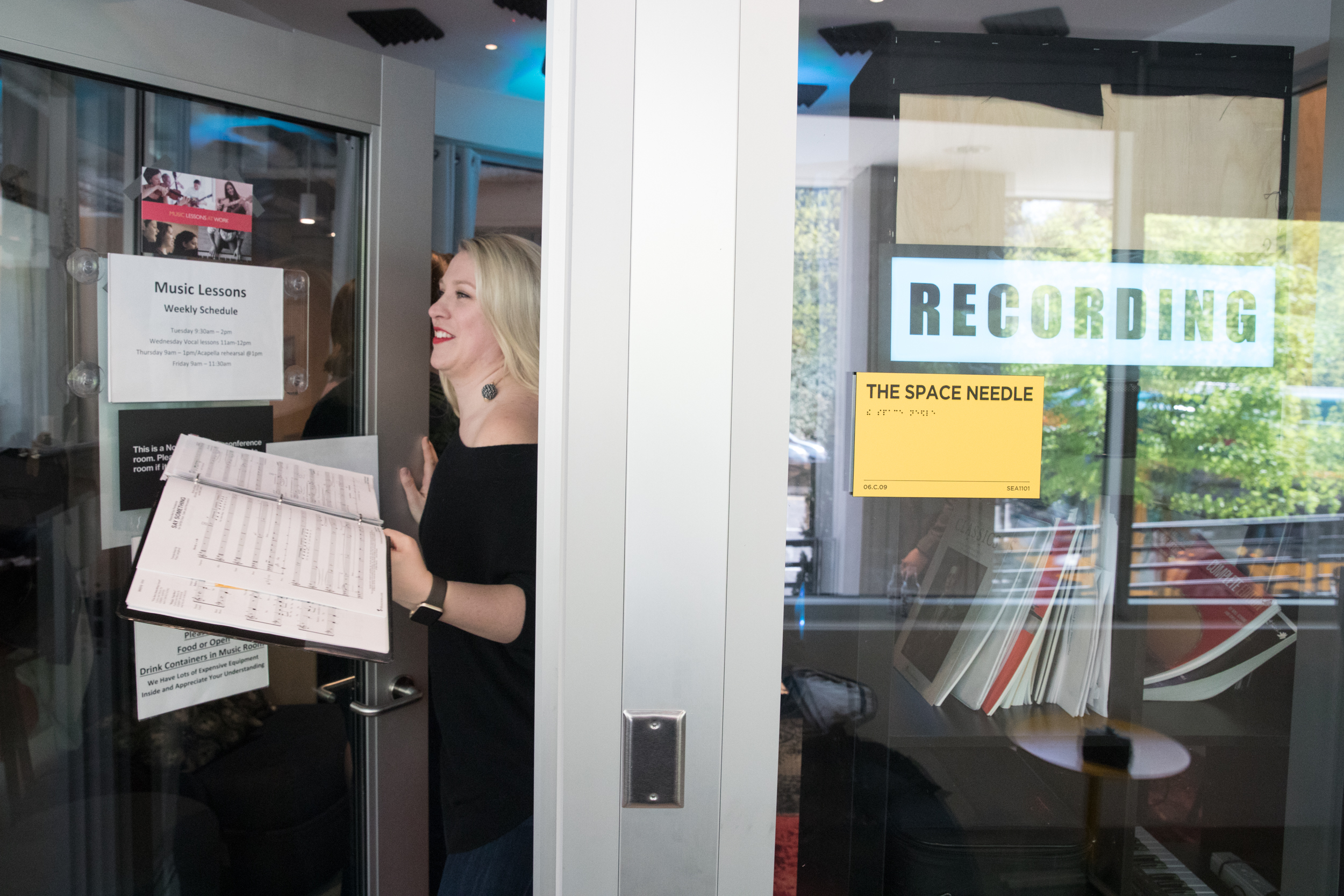 Employee Ashley Husmann stands in the door of a small recording studio during a practice session with Facebook's choir at the South Lake Union office in Seattle, April 26. (Photo by Matt M. McKnight/Crosscut)

As a child, Fred Clarke knew exactly what he wanted to devote his life to: classical music. He played cello and trombone and conducted fellow students in high school band before going to Yale to study music theory and history. But one year after starting a master's program in conducting at the Cleveland Institute of Music, his career path shifted dramatically.

He started to think about all of the other things he was interested in, and questioning whether a musical path was for him. In the end, he decided to turn in his music compositions for business school textbooks, and eventually headed off to work in Silicon Valley.

“I always missed it,” said Clarke, when talking about his classical music past. “Every so often, I’d say to my wife, ‘I really really miss doing this, but I just don’t see how it’s ever going to come about again.’”

But last year, after about a two-decade hiatus from conducting, he was suddenly presented with the very opportunity he’d been hoping for. And it didn’t come from a community music group or his alma mater; it came from his job at Amazon.

In what has become a trend at tech companies in the Puget Sound region, Amazon employees decided to start an orchestra at the Seattle headquarters. They invited Clarke to be their conductor, and the current senior manager for Alexa engineering readily accepted the offer.

The Amazon Symphony Orchestra has since expanded to nearly 85 musicians from throughout the company. The players’ backgrounds in music range from people who were trained at a conservatory and have performed professionally, to those who only picked up their instruments a few years ago. They typically rehearse weekday evenings once a week and last month they performed Mahler's Resurrection Symphony and Night on Bald Mountain in a free spring concert. They played for a sold-out audience of about 1,000 people.

Although it is certainly one of the biggest in the country, the group is far from alone. Technology companies in Washington and the rest of the country have been increasingly adding music groups to their business repertoire. From Google’s a cappella group Googapella to Facebook’s jazz ensemble, it’s downright difficult to find a tech company without a music group.

And as one of the major technology hubs in the U.S., Seattle is right in the middle of this trend.

But these types of music groups got their start long before the tech scene was anything like it is today. One of the inaugural ensembles was a choir started for employees at Boeing around World War II. Benjamin Kendall, a structural analysis engineer at Boeing and the president of the choir, said it was launched as a way to entertain friends and families during the war efforts, but has continued to remain popular decades later. Over the last few years it has had between 35 to 45 members.

Today, many other vocal and instrumental groups at tech companies around the state have joined Boeing. Amazon alone has a handful of music groups in addition to its orchestra, including Vocally Self Critical, a 20-member acapella group that was launched in 2013. There’s also Face Clef, a 10-member barbershop-type singing group for employees at Facebook’s Seattle office, which performs a few times a year. And Microsoft has such acapella ensembles as OneChord, Startup Sound and The Baudboys.

The ensembles typically borrow one of the company’s many meeting rooms for rehearsals (although Facebook has its own music room for rehearsals), and can sometimes get funding from their company to cover such things as sheet music and travel expenses. 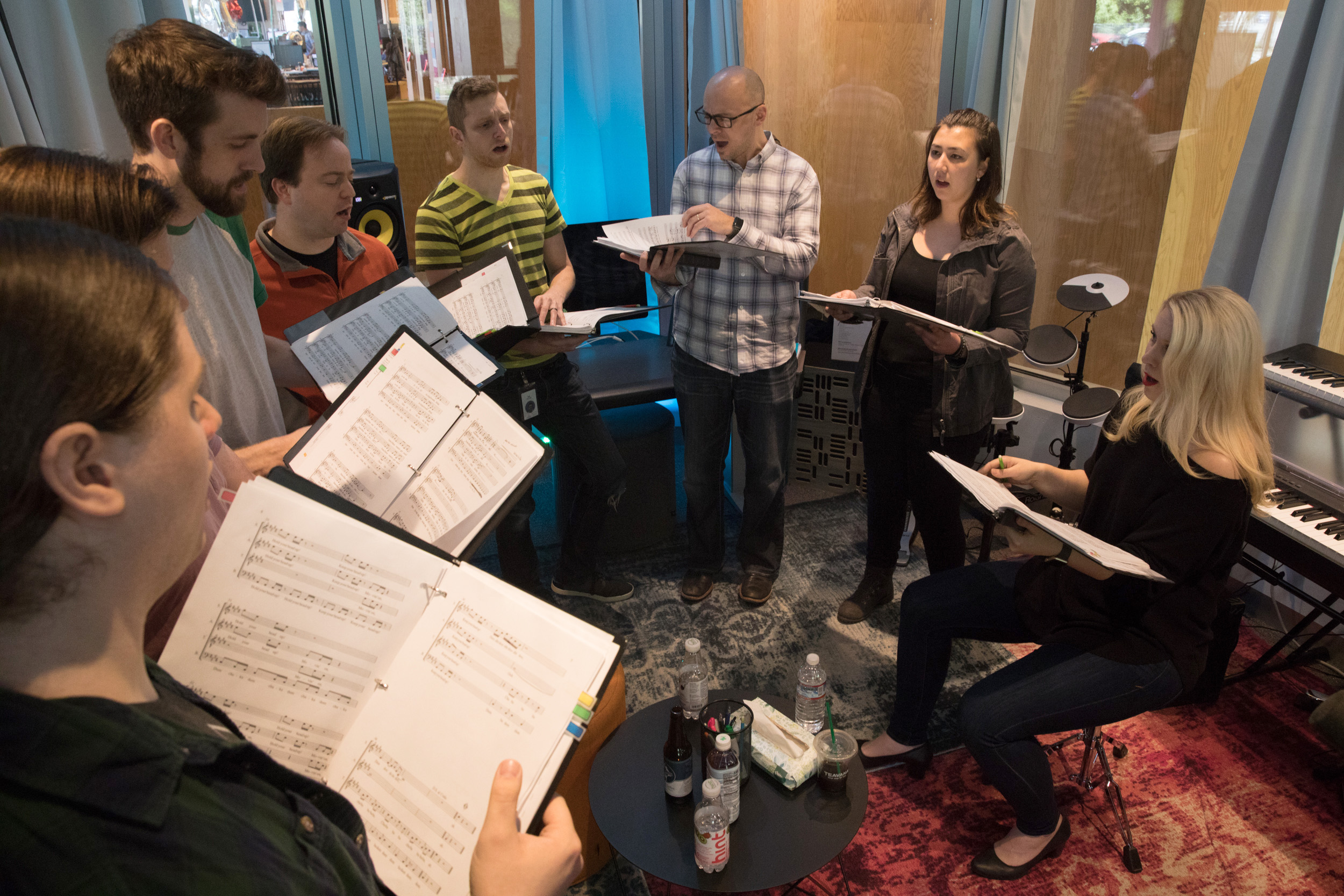 Like any extracurricular activity, they schedule it so that it doesn’t conflict with their workday by having most rehearsals in the evenings. Mark Adolph, president of The Baudboys at Microsoft, said the nice thing about working with others in your field is that everyone understands where the priorities are. So if someone needs to leave rehearsal early for a work emergency, everyone gets it.

But why are these music groups so common in the tech world?

Bringing together employees to play music can help to create a stronger sense of community within the organization, allowing coworkers from all across the company to bond and collaborate over something they enjoy and are passionate about.

“It doesn’t matter where you come from, we’re bonding over one subject,” said Ashley Husmann, a technical sourcer at Facebook, who has been leading Face Clef for about a year. “So it’s kind of like we formed our own family in a way, because we’re learning, struggling together. We’re definitely growing. ”

The groups can also be helpful when it comes to public relations, as many of them perform in charity concerts. For example, in December, Amazon’s orchestra and acapella group performed in a benefit concert that raised more than $18,000 for Mary's Place, a nonprofit for homeless families.

These groups may even be good recruiting tools. Clarke said one of the members of the Amazon orchestra works in human resources, and has recently been getting questions from people interested in working for the company who want to specifically find out about the orchestra.

It doesn’t matter where you come from, we’re bonding over one subject.”
— Ashley Husmann

But these ensembles are also simply fun to be a part of, and a nice break from the day-to-day work that can be extremely competitive, Microsoft’s Adolph said.

“When you’re doing that you’re not competing; you’re fully cooperating,” he said. “There’s no backstabbing on stage. When the other person sounds great, you sound great.”

Whatever the prime reason for their popularity, it’s clear these groups have really taken off in recent years. In fact, next month is the latest Techapella Northwest, a concert devoted exclusively to music groups from Seattle tech companies. It will feature ensembles from Microsoft, Facebook, Google and Amazon, along with Expedia. In 2016, the event’s Facebook page said 55 people attended the show. This year, there are at least 100 people expected.

“A lot of us love what we do at work, but I think we love to perform,” said Kendall, the Boeing engineer. “I think that release through performing, it’s a common thing that we have.” The musical bug clearly caught on at the company, as it later launched an orchestra and a band for employees after its choir.

The fact that there are so many musicians in the tech industry and so many employees and companies eager to fill their conference halls with music showcases the clear connection between these two mediums.

There are of course a variety of studies about musicians’ brains that might hint at why Amazon did not have any problem finding dozens of musicians for its orchestra. A 2014 study from Boston Children's Hospital revealed that people with strong musical training show enhanced performance compared to those without this musical background when it comes to cognitive flexibility, working memory and processing speed. It would make sense that these skills are especially applicable for programmers, designers and others in the tech field.

For Clarke, the connection seems to run even deeper. “Music is one of those things where you kind of never find the end,” he said. “There’s no right answer; there’s no right performance. There’s something about technology that’s kind of that way as well. You never solve the problem completely.”