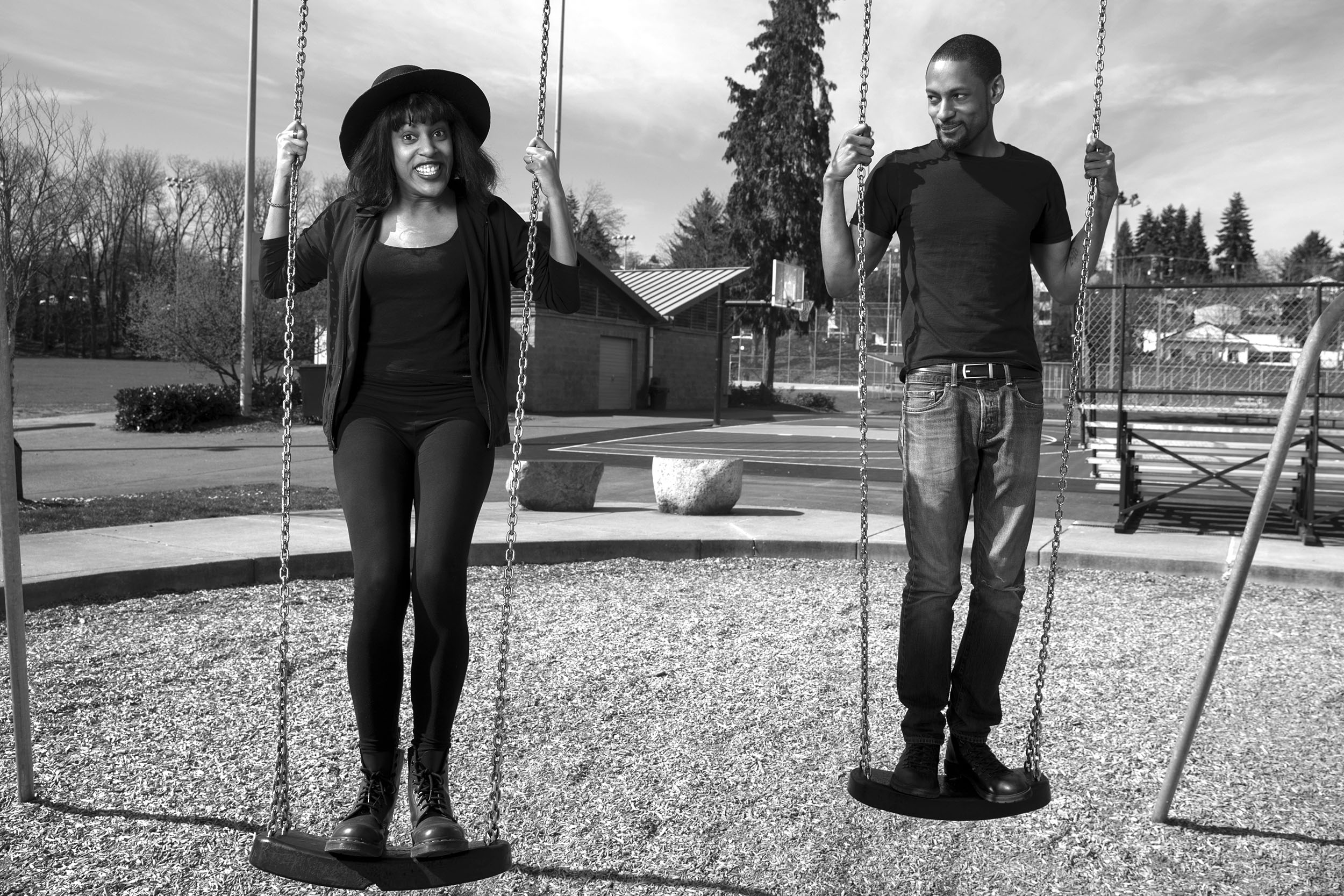 Eva and Cedric Walker of The Black Tones during a portrait session at Rainier Playfield in Seattle's Columbia City neighborhood, where both of them live. Their new album draws in part from their childhood living in Seattle's Rainier Valley. (All photos by Matt M. McKnight/Crosscut)

There’s no cigarette smoke or worn leather couch. In the hallway, ukulele chords and piano sheet-music books sit neatly in plastic wall pockets. On a sideboard, a children’s book sits next to an annotated music sheet of the 18th-century musical composition Judas Maccabaeus.

Friday night rehearsals of one of Seattle’s most-hyped rock bands, The Black Tones, do not speak to the clichéd tropes of rock ’n’ roll. In a basement rehearsal space that’s also a music school in West Seattle, there are no egos, hard drugs or hard alcohol. Only hard cider.

“Tangerine turmeric hard cider. We’re all gonna have yellow mouths,” frontwoman and guitarist Eva Walker quips into the microphone. To her right, her twin brother, Cedric Walker, the other half of the band, dressed in a Seattle SuperSonics sweater, grins from behind a drum kit.

The calm before the storm. Just a couple minutes later, Cedric kicks the drums and hits the cymbals into a rip-roaring rhythm. Eva breaks out a thick, nervous riff that won’t end. Only 3 minutes into their hit song "The Key of Black (They Want Us Dead)," Eva, dressed in an all-black ensemble, finally gets to the gut-punching first lines and point of the song in a low, roaring voice: We Want Love / They Want Us Dead.

By now, most local music fans know the follow-up lyrics to the start of the protest anthem against racist police brutality. It became one of KEXP’s Most Played Songs of 2018

“The Black Tones are the most exciting up-and-coming band in Seattle,” says Adam Zacks, who founded the Sasquatch! music festival and booked them as the opening band for Death Cab For Cutie last year. “They have an infectious energy. They feel like an amalgamation of the spirit of Seattle: Jimi Hendrix and Nirvana, plus their own vibe. They infuse the spirit of punk rock in their modernized version of blues rock, in a really cool and subversive way. And all of that, of course, wouldn’t matter if they weren’t a killer live band.”

The band, which plays with guest bassists, confirmed their reputation as a live sensation in performances at KEXP (where Eva is now also a radio host) and the Capitol Hill Block Party. They closed out 2018 as the opener of a sold-out Red Fang and Thunderpussy show at The Showbox.

On Thursday, they celebrate the long-awaited release of their first album, Cobain and Cornbread, with a concert at Chop Suey on Capitol Hill.

Cobain and Cornbread is a collection of songs that speaks to their hometown and youth. If their songs were an image, they say, it would be the wood paneling in their grandmothers’ bright yellow Mount Baker house, where they grew up. The house “looked like it came straight from New Orleans,” Eva says. It was filled with food and family, including their mother and grandparents, all music lovers from the South. It was a warm home in the cold Northwest.

After moving on from their grandmother’s home, they attended Summit K-12 in Lake City. There, Eva was the self-described “socially awkward” music and outer space fan, a drummer who felt more confident singing in front of strangers than her own family. She did not tell her brother — a popular, easygoing and successful basketball player — that she’d been practicing singing.

So when he eventually heard Eva sing for the first time at Folklife, he was blown away. Cedric realized she needed a band. “I knew she was a great drummer. When I found out she had the voice, I was like: I can't not do anything about this,” he says.

Eva eventually taught her brother to drum. Today, his drumming lies square in the vein of Eva’s self-taught drum style: ear-shatteringly loud and forceful. “I’m like a hammer,” Cedric says, “to the point where the kick drum always ends up 5 feet in front of me.” He laughs.

On Cobain and Cornbread, it’s the forceful drumming that grabs you from the first song: "Ghetto Spaceship" is a musical come-on from the perspective of a space nerd. In other songs, such as the roaring lament "Mama, There’s a Spider in My Room," Eva’s boisterous guitar and voice rule. Aural outliers such as a harmonica-buttressed cover of "Rivers of Jordan," a spiritual hymn about the quest for freedom, or the banjo ballad "Striped Walls," about Eva’s room in her grandmother’s house, only amplify the other songs’ thundering power.

Time and time again, their childhood yellow house and its occupants make an appearance on the album. In "Plaid Pants," they pay tribute to their grandparents’ love for plaid shirts and pants (and each other). In "Welcome Mr. Pink," a start-and-stop, echo-ey chant, someone who was absent during part of their youth makes an appearance: their father.

“Mr. Pink does not refer to the movie Reservoir Dogs,” Eva says, “but what’s funny is that our dad was also a bank robber, like [the character in] Reservoir Dogs. The pink ink [refers to] the dye packet in the stolen money, which rubbed off and got on his clothes. The song is me experiencing being in a prison cell from my dad’s perspective. The reverb on the vocals is like he’s in a prison cell.”

Eva explains how their mother, being a “Catholic conservative Democrat," “didn’t want anyone to know about that.”

Now, “she has also seen how much people like the song and supports that we are going after it before anyone else does,” Eva adds.

After their concert at The Paramount last year, The Black Tones took their first family photo in years with their father, mother and siblings (their mother and sister had sung backup vocals during the show). “Before the Paramount, there wasn't a family photo with my dad I was old enough to remember,” Eva says.

To the Cedric, rock ’n’ roll is not having "been out since five o’clock in the morning," he says. It's taking a picture with your family, and having them on stage. It’s sustenance.

“Rock ’n’ roll is comforting,” Cedric says. “If you go back to the slave spirituals and blues [that have] inspired rock ’n’ roll, you see how slaves were singing music to get through the situation.”

To Eva, the act of playing is also freedom. “[Cedric] told me to embrace my weirdness,” Eva says of how she became the outgoing, stage-loving chatterer she is today. “I took it to heart and was able to do all of these things. I’ve even played nude on the stage.”

"I did not say that,” Cedric counters, in the mock exasperation, amusement and banter reserved for siblings or people who’ve known each other for decades.

“[Our music] takes me back to childhood,” Cedric says. “That’s probably one of the many reasons why I love playing so much with Eva. ’Cause I feel like a kid hanging out with his sister.” 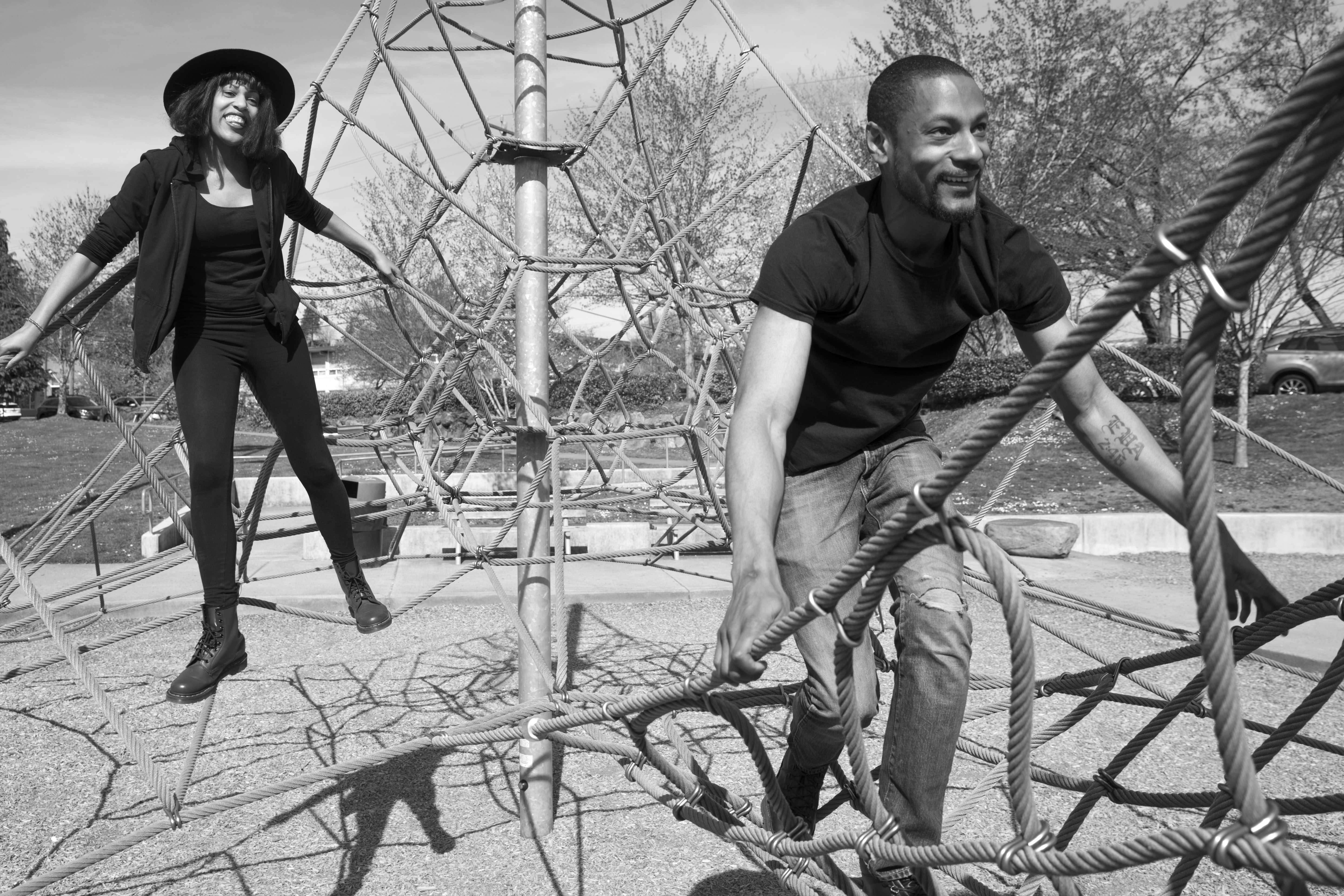