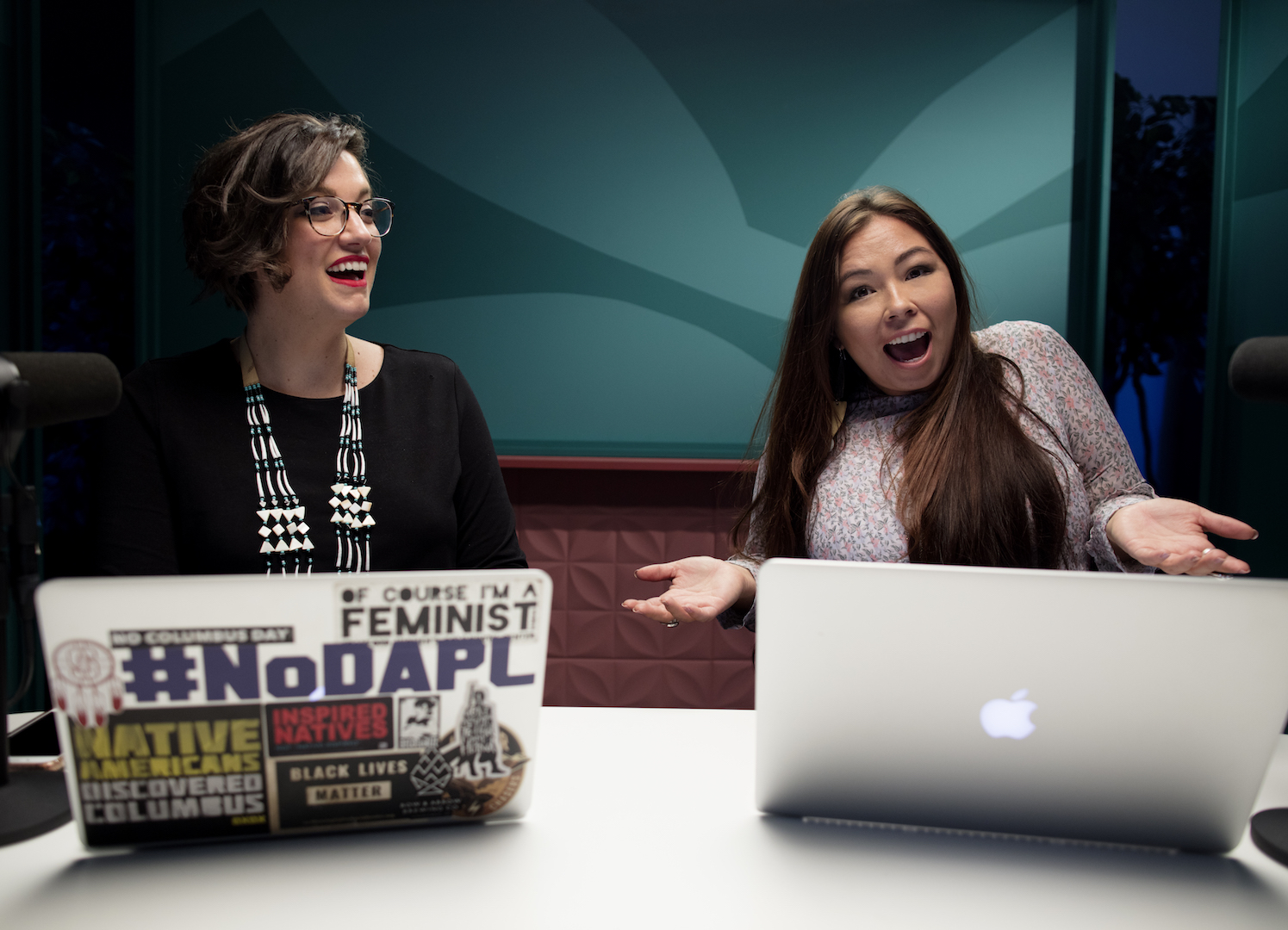 In 2012, photographer Matika Wilbur (Tulalip and Swinomish) sold everything in her Seattle apartment to embark on a multiyear project to photograph the more than 562 federally recognized Native American tribes in the United States. She’s been crisscrossing the country in her RV ever since.

Recently, she made a pitstop in the Pacific Northwest to do something she had never done before: record a podcast. Called All My Relations, the podcast, recorded at the Tacoma Art Museum, explores the complexities of what it means to be Native today.

All My Relations is co-hosted by scholar and writer Dr. Adrienne Keene (Cherokee Nation) and Wilbur, who stays in Swinomish when she’s not traveling across the country.

Tacoma Art Museum has been somewhat of an artistic home for Wilbur. It hosted the first exhibition of photography from Project 562, has helped Wilbur fund the project as a fiscal sponsor, and in 2020 plans to showcase the project’s final, major exhibit in 2020.

“It's been an incredible relationship that, as an artist, it's very rare to find,” Wilbur says.

So, when she met with Rock Hushka, deputy director and chief curator of TAM, to ask if the museum had a space for a recording studio, he did not hesitate to open the doors of the museum’s book-filled Resource Center to record. “Because we love Matika, and we want to support her,” he says.

Wilbur rented a house near the museum; Keene, based in Rhode Island, flew in. Their podcast guests, invited to speak on topics ranging from decolonizing sexuality to blood quantum, food sovereignty and representations of Native peoples, also flew in from across the country.

“It was basically podcast camp,” says Wilbur in a recent phone interview from California, a quick detour after visiting different village sites of the Kumeyaay tribes in Mexico. “We recorded everything in one week at the Tacoma Art Museum. It was like being in a relationship with all of these incredible people and getting to reestablish those ties,” she said.

The podcast’s origins perfectly illustrate its central credo, interconnectedness. Whether it’s the Cherokee word “digadajeli’i” (which means “we all belong or are related to one another”) or “Mitakuye Oyasin” in Lakota, Wilbur says the podcast is a way of thinking about how Native people walk through the world. It boils down to this: Relationships, with people and nature, are the primary way of thinking about and walking through the world.

“The concept of All My Relations is something we’re constantly attempting to teach our children,” says Wilbur. “How do we make sure that our kids have access to that information? What does that look like from several different perspectives?”

It looks — or rather, sounds — like a lot of fun. The first episode begins with Wilbur laughing softly, and the laughter never really stops. “We could be silly, laugh at inside Native jokes,” explained Keene in a telephone interview from Rhode Island about the recording process. “It was a lot of work, but also really amazing and fun.”

Listening to All My Relations feels like eavesdropping on two friends talking and asking their way through complex and, at times, challenging topics. A similar intimacy can be found in the popular podcast “Call Your Girlfriend,” which is hosted by “long-distance besties” Aminatou Sow and Ann Friedman. In All My Relations, however, the guests, many of whom are scholars, get more airtime.

Wilbur and Keene, for example, spend more than 40 minutes with Valerie Segrest, a Muckleshoot nutrition educator, discussing food sovereignty and how colonization has disrupted Indigenous relationships with traditional foods. The hosts delve into Segrest’s family history and her interest in nutrition.

“I was reading a report about all of the eggs that we have are inside of us at birth, and so, I’m feeding my grandchildren in this moment,” Segrest says about why she breastfeeds, and how it can help “decolonize our diets.”

The mood is not always this light. In Episode 3, titled “Native Mascots: Really Still?,” for example, the duo talks to Dr. Stephanie Fryberg, whose social–psychological research shows how racist mascots decrease the self-esteem of Native youth.

“Yet there are a ton of schools, even in Washington still, that have Native mascots,” Wilbur says in the interview. “We know that when we turn on the television, our young people are not going to see themselves represented. We have the highest death rate amongst our Native teenagers than any other ethnic group in the country. We have very high numbers of sexual violence towards Native women. And if we are mostly represented in an overtly sexualized way, like, Pocahontas, why is it that our women are so fetishized? The way we’re represented is affecting our lives in very real ways.”

“The statistics are incredibly striking,” Keene points out. “A majority of Americans have never met a Native person. On TV in the last years, there was less than one Native character portrayed in any prime-time show. Native people are so incredibly invisible that each representation takes on increased importance.”

As an assistant professor of American studies and ethnic studies at Brown University, Keene studies college access for Native students, representations of Native peoples in popular culture, as well as ways Indigenous peoples use the internet, social media and new media to challenge misrepresentations. The latter is something she does outside of academia as well. On both Twitter and her popular blog Native Appropriations, Keene has relentlessly called out cultural appropriation, such as Sephora’s “Starter Witch Kit,” a “selfie mural” of a sacred war bonnet in a California bar and the use of the term “spirit animal” by the Fab 5 in the popular Netflix series Queer Eye.

During her first year at Harvard, where Keene was just one of only two Native doctoral students on campus, students inflicted a brutal reality check on her: they didn’t know anything about Native people or even thought Native people to be “extinct.” “I had a classmate say, ‘In the US we killed them all. That’s why we don’t have to deal with them anymore,’” Keene recalls.

Around that time, Keene would take a shortcut to Harvard Square through a nearby Urban Outfitters store. There, she found a “cultural appropriation extravaganza” of totem pole jewelry stands, dream catchers made in India and fake mukluks. Something clicked: All of these images matter, she thought. “Everything we’re trying to change [in our communities] is colored by the fact that non-Natives only think of us of as those fake stereotypes.”

A similar epiphany led Wilbur to Project 562. While teaching photography at Tulalip High School and Northwest Indian College, she struggled to find enough Native photographers to fill a year’s worth of curriculum. They needed more images from a Native perspective, Wilbur figured. At the request of her elders, Wilbur set out to fill the gap herself.

During her travels in Phoenix, she met Keene. Wilbur offered to photograph her the next day.

“We spent two hours together with her asking me these beautiful and intimate questions about what it means to be a Native person,” Keene says. “Once you have that experience with anyone, especially Matika, friendship grows from there.”

Both Wilbur and Keene had been thinking about podcasting for a while. What if their conversations could reach a national audience?

Though there are plenty of Native podcasts, such as Red Man Laughing, hosted by Anishinaabe comedian Ryan McMahon; the storytelling-focused Still Here; or filmmaker Sterlin Harjo’s interview podcast The Cuts, the podcasting industry is mostly white and male — although listenership among people of color is rising.

“Sterlin Harjo came out with a podcast a couple of years ago,” Wilbur says. “I've listened to every one of those episodes like three or four times because sometimes I’ll be in an airport or public space and I feel lonely because I’m surrounded by non-Indians, constantly. Sometimes I just want to feel the comfort of the sound of my people. The [podcast] space is not heavily occupied by Native people, and I feel like our young people need the opportunity to see themselves and hear themselves.”

That, says Keene, is key. Their podcast is for Native people to hear and see themselves, to laugh and to cry, to be part of something and to take up space. “We are talking about things that Native communities care and think about,” she says. “But we also want to bring awareness to non-Native people that we still exist. That we’re real and we have these complex and beautiful and messy lives as Indigenous people, and that those are worthy of listening to.”