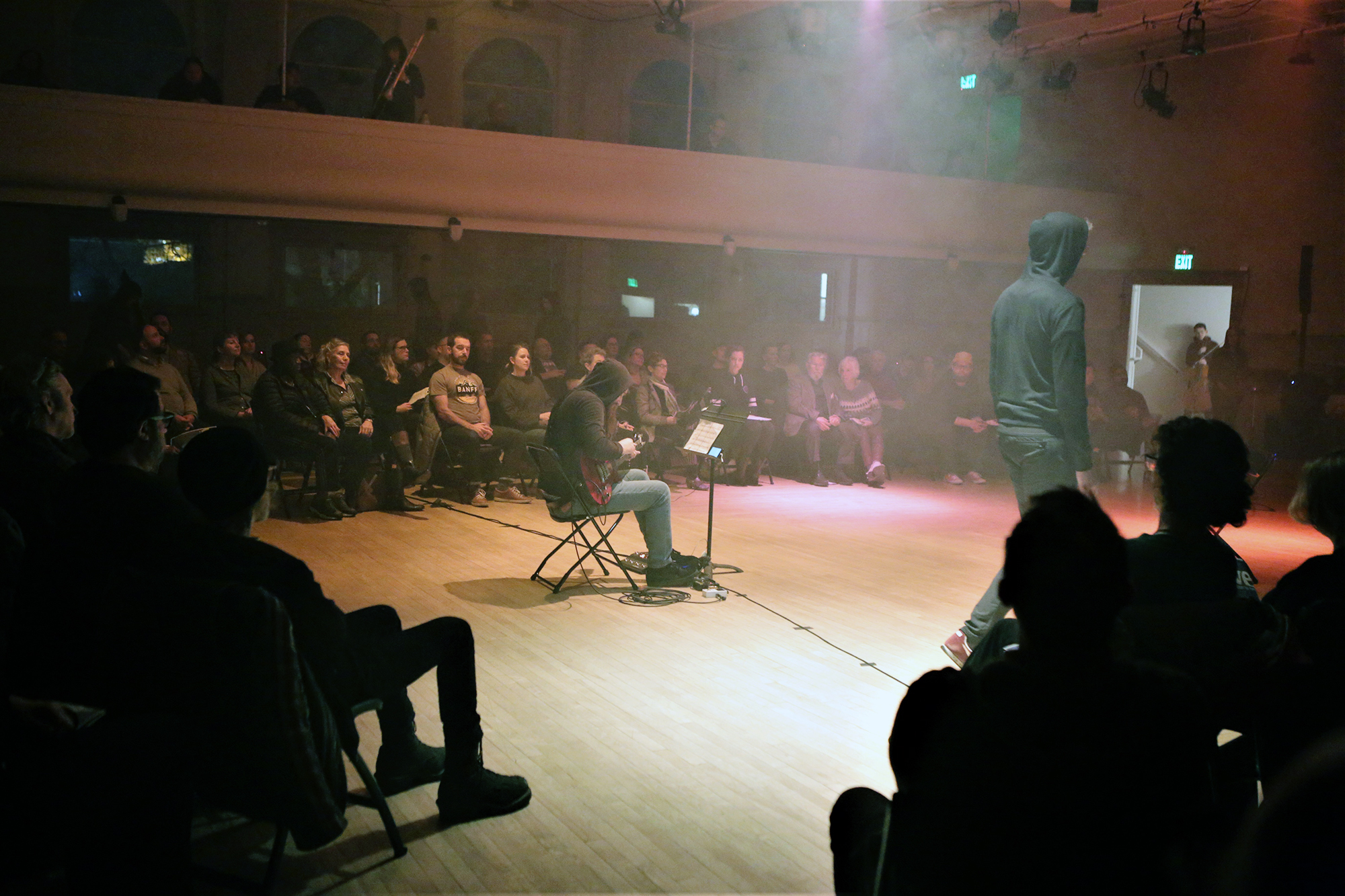 Once in a while, marimba player and composer Erin Jorgensen would ride her bike by the Fremont offices of Brown Paper Tickets, a Seattle-born business that bills itself the “fair-trade ticketing company.” She had noticed the company’s simple sign featuring brown, blue and orange ticket stubs, but hadn’t given it much thought until early last year, when she had to pick a ticket-sale service for a concert series she was curating at Washington Hall.

“They were a small, local Seattle company. I saw a lot of theater companies using them [so] that was the first name that popped into my head,” Jorgensen says. For about a year, everything went smoothly. She would produce concerts of contemporary classical music at Washington Hall, people purchased seats through Brown Paper Tickets (BPT), she would pay the musicians and 10 days later she would get a check from the company.

But that’s not what happened, she says, after her Feb. 24 concert “Weather,” a show featuring two dozen classical and rock musicians (plus special effects via fog machine and strobe light) at Washington Hall. After paying all the performers out of her own pocket shortly after the event, Jorgensen deposited the $1,935 check from BPT on March 21.

Five days later, Jorgensen says, she received a text notification from her bank: The deposit would be removed from her account. “I thought someone hacked my identity, or [that I] lost my debit card,” Jorgensen says. But her bank told her the problem was the issuer of the check, not her.

Jorgensen is among dozens of local and national event producers, nonprofits and artists claiming Brown Paper Tickets has not paid them for events that took place before coronavirus cancellations hit the state. Many say checks (some totaling thousands of dollars) they received have bounced, and that BPT has issued unclear communications about when they will receive the money. Since March 19 — two days after the company reached out to event producers stating that checks would not be honored, asking producers not to deposit them — Washington state’s Consumer Protection Division has received 10 complaints about the company.

On its website, in emails to event producers and through a spokesperson, the company claims it’s a backlog issue, stemming from coronavirus event cancellations and refund requests from customers who decided not to attend events.

“Our industry — supporting grassroots artists, musicians, community and small businesses in their events — was one of the first cars in the COVID train wreck,” says BPT spokesperson Barb Morgen. (CEO Steve Butcher did not respond to an interview request.) “Brown Paper Tickets...had a sudden cancellation of 95% of our March and April events, along with a tsunami of refund requests,” Morgen says, adding that cancellations of events started happening in early February, well before bans on gatherings went into effect.

“Faced with that huge backlog of cancellations ..., we were forced to temporarily pause the outbound payments [in mid-March],” Morgen says. She says that the company has restarted paying event organizers. “We are going to get every single event organizer paid. It's just that because of COVID-19, it's a slow pay at the moment.” Morgen declined to specify a date when all event organizers would be paid. “It's just taking longer to get through the backlog than we anticipated.”

But some clients whose events took place before coronavirus event restrictions wonder about the company’s timeline, as some say they received checks before Brown Paper Tickets paused its outgoing payments. “They say they have a big backlog of cancellations, but that doesn’t explain to me why there are checks that were out there before the COVID-19 cancellations that they are not honoring either,” says Dan Johnson of Malaney Creek Farm in Shelton. Johnson and his wife, Tracy, say they are still waiting on $1,080 from Brown Paper Tickets for a March 1 maple syrup making workshop the couple organized. (Morgen, the spokesperson, says that due to the backlog, a “temporary hold” was placed on payments to some event organizers, but that all would be paid in full.)

Like many other event producers, the couple says they are out most of the money because they’ve already paid the ethnobotanist leading the workshop. Similarly, Tri-Cities comedian Adam Kessler has already paid comedians for two comedy nights he curated March 1 and 7, dipping into his personal funds to do so. He says he has been waiting on two checks totaling $1,064 from Brown Paper Tickets to pay himself back. As a full-time comedian living off events and performances only, “I was definitely depending on those funds to come in,” he says, particularly after all of his other March and April shows were canceled.

For many artists and performers making a living from their craft, unpaid checks put even more pressure on an already dire situation. Seattle-based butoh choreographer Vanessa Skantze says she’s still awaiting payment of three Brown Paper Tickets checks for a weekend of performances at Base Art Space in late February, totaling $740. “That’s a chunk of change,” she says. “I don’t have any income right now myself; it’s pretty challenging.”

You hardly expect organizations like Brown Paper Tickets to be so low on cash flow due to endless refunds that they can’t really cut checks.”
— Vivian Hua, Northwest Film Forum

The pandemic and related closures have hit the arts and event industries hard. The ticketing industry is feeling the pinch, too. Brown Paper Tickets, Morgen says, has laid off or furloughed 25 employees in the wake of the COVID-19 crisis. During the crisis, the business is making other options available to clients, such as a new help center for organizers who want to host virtual events, as well as a "Virtually Live Event Hub.” The Seattle-based The Quarantine Sessions, a weekly live stream concert with a virtual tip jar through Brown Paper Tickets, has already generated thousands of dollars for the musicians and producer, Marina Albero, who says she hasn’t experienced any problems with payment.

Eventbrite, the San Francisco-headquartered event management and ticketing website, saw its share price fall significantly after the company adjusted revenue projections because of the outbreak. Locally, a precipitous decline in ticket sales at Bold Type Tickets, The Stranger's ticketing platform, combined with a drop in ad revenue, forced the local alt-weekly publication to temporarily lay off 18 employees.

Like Bold Type Tickets, Brown Paper Tickets, which has offices in Seattle, Bellevue and the U.K., prides itself on being homegrown and independent. BPT was founded in 2003 as the David to Ticketmaster’s Goliath.

Back then, Brown Paper Tickets' unique selling proposition was to be the good guys, for the smaller guys. By charging some of the “lowest service fees in the industry,” the idea was (and is) that smaller producers and venues would benefit. And ticket buyers can feel good about using the local business, a “not-just-for-profit” company that donates a portion of its profits to charity (including animal welfare, the environment and human rights) and pays their workers to volunteer for charitable causes.

In a 2014 interview, CEO Steve Butcher summed up the company's “give more, take less” model like this: “We take what we need so that the industry can flourish. And if they flourish, we flourish, we last longer together.”

But lower fees also mean slimmer margins, and the multi-billion dollar ticketing industry is highly competitive. Last year, BPT raised its ticket fees from 3.5% to 5% of the ticket price (the company charges a $0.99 flat fee on top of that).

On social media and in interviews for this story, event producers raised questions about the company’s business model and cash flow. When asked, Morgen, the spokesperson, declined to say whether the company was dealing with cash flow issues currently or before the COVID-19 crisis.

“What a supply chain crumbling,” Vivian Hua, Northwest Film Forum’s executive director, wrote on Facebook. “You think about artists hurting cause they can’t play shows, crew being laid off cause they can’t produce shows, and venues struggling cause they host shows…. You hardly expect organizations like Brown Paper Tickets … to be so low on cash flow due to endless refunds that they can’t really cut checks.”

Northwest Film Forum, which has used Brown Paper Tickets for years, is also still awaiting payments, Hua said over email. “We don’t feel great about it but we are trying to remain loyal to an organization we have been with a long time, knowing that everyone is struggling at this time,” she said. “Everyone is trying their best.”

This article has been updated to include more information about Brown Paper Tickets’ efforts to support clients with virtual event options during COVID-19.