Aimed at sustaining the Black Lives Matter movement, the new citywide art show is part of the Seattle Design Festival.

The artworks in the augmented reality exhibit Amp'Up Seattle literally add another layer to the city. Shown here is a preview of the artwork "No Justice, No Peace," which will appear (virtually) on the facade of Kane Hall at the University of Washington. (GGLO)

If you find yourself on Seattle’s East Pine Street these days, chances are you’ll spot a few people looking downward, checking out the blocklong “Black Lives Matter” street painting. But over the next two weeks, you may also notice people looking up at a new artwork that broadcasts another message of the movement, this time hovering in the sky.

"OUR STREETS," it reads, in three-dimensional red letters. There’s just one caveat: you’ll need a phone to see it. The artwork is entirely digital. It’s part of a new, citywide augmented reality art show called Amp’Up Seattle. By downloading a free app with the same name, anyone can access eight virtual artworks that appear layered over the existing cityscape — like Pokémon Go for art.

But you won’t be catching Pikachus or other fantasy critters. Instead, you’ll be viewing a different perspective of Seattle, one inspired by the recent protests for racial justice.

“We decided to look at the art that BLM brought about,” says Gargi Kadoo, one of seven designers at the Seattle-based architecture and design firm GGLO who created the digital art show for this year’s Seattle Design Festival. “The city kind of went in and destroyed [or] brought down a lot of this art,” she says. “We're celebrating art that is gone.”

They’re not alone. Businesses, museums and news media are finding ways to physically or digitally preserve the street art that sprouted from the BLM movement as well. Kadoo and her collaborators take it one step further by creating their own works inspired by Seattle’s street art. Call it an homage, they say. A way to keep the message alive, the protest going.

In the Central District, app users will discover three-dimensional graffiti-style lettering that floats above the intersection of 23rd and Union and implores onlookers to say the names of Trayvon Martin, Breonna Taylor and George Floyd. When scanning the Seattle skyline at Kerry Park or the José Rizal bridge, a cloud of pixelated rain drops appears to hover over the skyline, as if the city is weeping. And at Westlake Park, the app frames a digital “Right to Remain Heard” poster by local artist Kreau within the plaza’s 24-foot proscenium arch.

The 10th edition of the Seattle Design Festival runs Aug. 15 to 23. Amp’Up Seattle artworks are viewable until Aug. 23rd. Find a map and more info on how to download the app here.

“It's sort of a different way to come together,” says Hannah Estrich, who also worked on the project. Safely, of course. Amp'Up Seattle is tailor-made for the pandemic. “You can go out to the site, all see it together and be 6 feet apart,” Estrich says. “You don't ever have to have to be near each other while you're looking at it.”

Just a few days before the app’s launch, the GGLO team was doing a trial run. Estrich, standing near the balustrade of Queen Anne’s Kerry Park, pointed her iPad at a printout photo of the Space Needle. Like her, users will have to scan printed posters (attached to fences, guardrails or telephone poles) and stand in the right spot to make the three-dimensional sculptures and two-dimensional animations appear. The art literally adds another layer to the city experience.

Yes, Kadoo admits, it requires, like so much else these days, a screen. “But you're not sitting on a couch. It exists in a real site and context. You have to go to a real place to see it,” she says. “It bridges the gap between virtual and physical.”

That could be the unofficial slogan of this year’s Seattle Design Festival, which for its 10th anniversary has mostly moved to the digital sphere, with virtual exhibitions, film screenings, talks and weekly design challenges and prompts (including one to map your favorite places in the city with the aim of creating a ‘happiness map’).

Though the festival’s usual Occidental Park outdoor street fair and touchable interactive art installations are a no-go amid the pandemic, it still presents plenty of opportunities to venture out of the home: A self-guided mural tour, scavenger hunt, outdoor art shows (including one featuring English lavender to help the bees pollinate) and photo, video and animation screenings, plus a pop-up printing press and street sink. 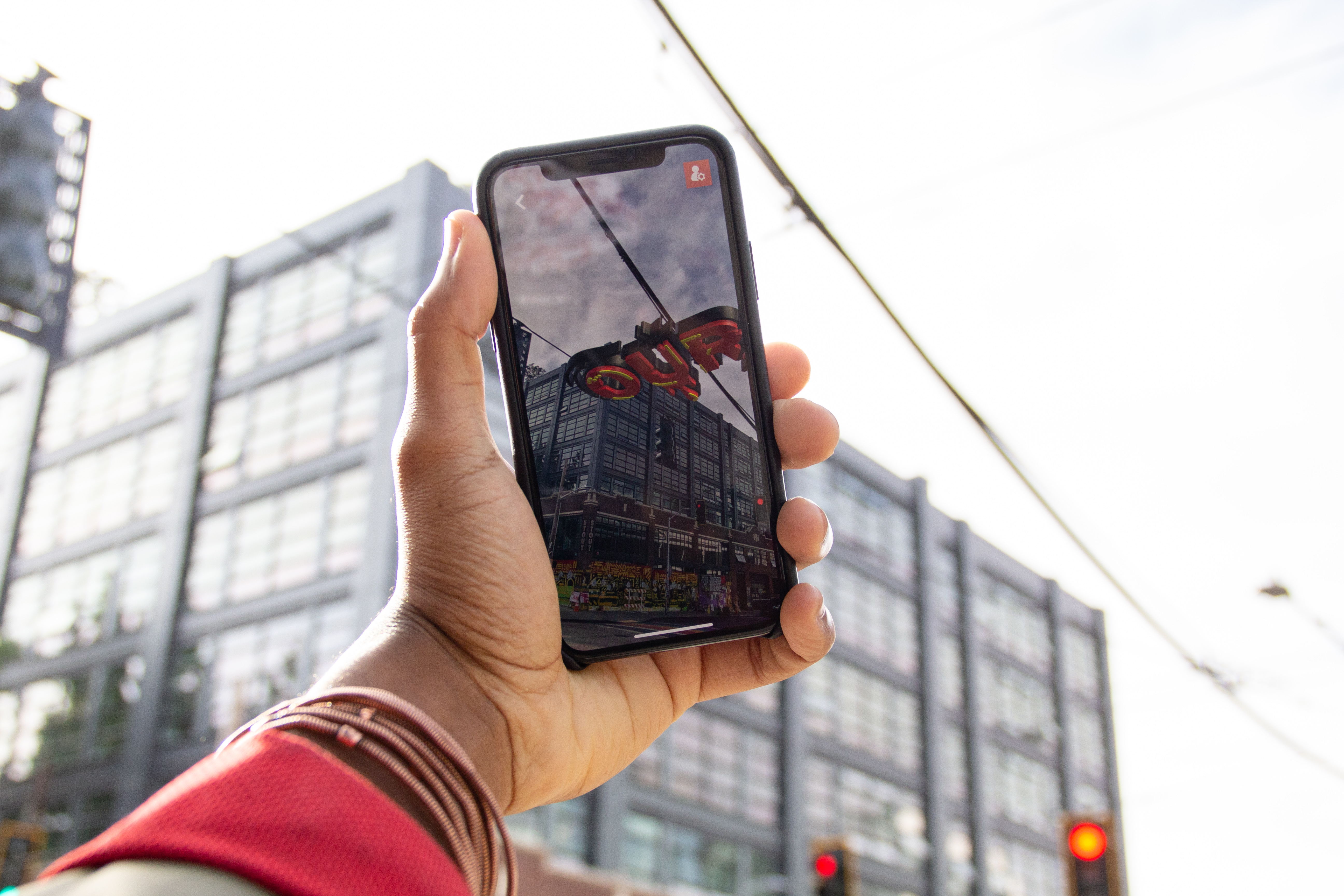 One of the designers of local firm GGLO tests out its new augmented reality app. Created for the Seattle Design Festival, the app is a way to add virtual protest art to the cityscape, the architects say. (GGLO)

One of the designers of local firm GGLO tests out its new augmented reality app. Created for the Seattle Design Festival, the app is a way to add virtual protest art to the cityscape, the architects say. (GGLO)

Regarding its own contribution to the fest, the GGLO team originally envisioned a physical structure. The idea was that the architects on the team would each create a fragment of a giant sculpture in their living rooms and then piece it together in person. It would be an opportunity for the largely computer-bound architects to get their hands dirty, Estrich says: “We don't spend a lot of time actually building things. So having a chance to build a physical thing every year is really fun.”

But as the pandemic progressed, an in-person build-out seemed increasingly unwise. The team decided to go back to the digital drawing board. They designed 3-D artworks on their computers and worked with Akular, a Virginia-based company that specializes in augmented reality applications for the architecture and real estate worlds, to make the models come alive in the app.

Some of these 3-D models, like the dark cloud of tears, are original designs. Others are inspired by street art spotted around Seattle in order to “amplify,” as Kadoo puts it, the art and artists. Much street art is anonymous, however, which means the artists whose work gets amplified may go uncredited (and unpaid).

“We would like to credit these artists,” Kadoo admits. “But at some point we also found that there was no way we could check them because a lot of these are anonymous. There was no way to track it.” Plus, she adds, they're riffing on the existing art, not copying it. "This is like a celebration of that art."

On a recent Zoom call, Estrich screenshared a photo of an anonymous Seattle mural. It features a yellow fist and another yellow hand making the peace sign on a blue background. For the app, Estrich converted the mural into a row of three-dimensional fists and peace signs moving up and down, as if during a protest. It will appear (virtually) on the facade of Kane Hall at the University of Washington.

When Estrich went to the university’s Red Square to test out the app earlier this week, she noticed university employees “hosing off all of these Black Lives Matter signs,” she says. The timing was uncanny. “It was so powerful to me to be there while they were doing that and know that they wouldn't be able to hose this one off. They can't take it off,” she says. “This is virtual, it can go on.”

For two weeks, at least. The app will be available for the duration of the Seattle Design Festival, perhaps longer. But for GGLO, it’s not just about the physical artworks or their digital counterparts. “The main aim was to have these locations have a new meaning to them,” Kadoo says. She hopes people will use the app and artworks as an opportunity to “revisit the focus of the BLM movement,” she adds. “Keep that heat and conversation going.” 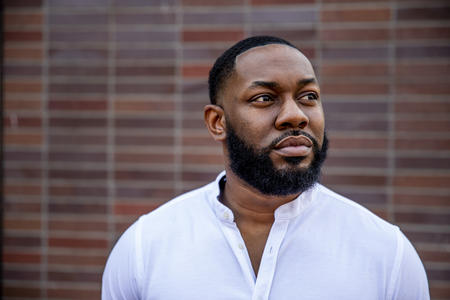