Plus: Whale watching in Magnuson Park.

Last weekend I made my first foray to Seattle art galleries since March. (To refresh: those are places where art is installed indoors.) Reengaging in this simple act was was undeniably exciting, albeit not without a few adaptations.

At the first gallery, a staffer called out a cheery hello upon my arrival, then took a firm Charlie’s Angels stance to wield a thermometer gun at my forehead. “Oh! OK!” I said, startled. She laughed, checked my reading and waved me in. At the next spot, a masked attendant quickly ran out from behind the desk and asked for my contact tracing information. At another gallery, an employee gestured to an XL jug of hand sanitizer at an entry table and said, kindly, “Please sanitize before coming inside.” At yet another, no such measures were taken, but everyone was masked and had plenty of room.

It was hard to tell with fabric covering the bottom half of everyone’s faces, but people seemed thrilled to be doing the old familiar gallery walk — raising eyebrows and smizing in solidarity. I never saw more than seven people in a gallery, which felt safe, and also made it easy to get up close and linger with the pieces I liked most. 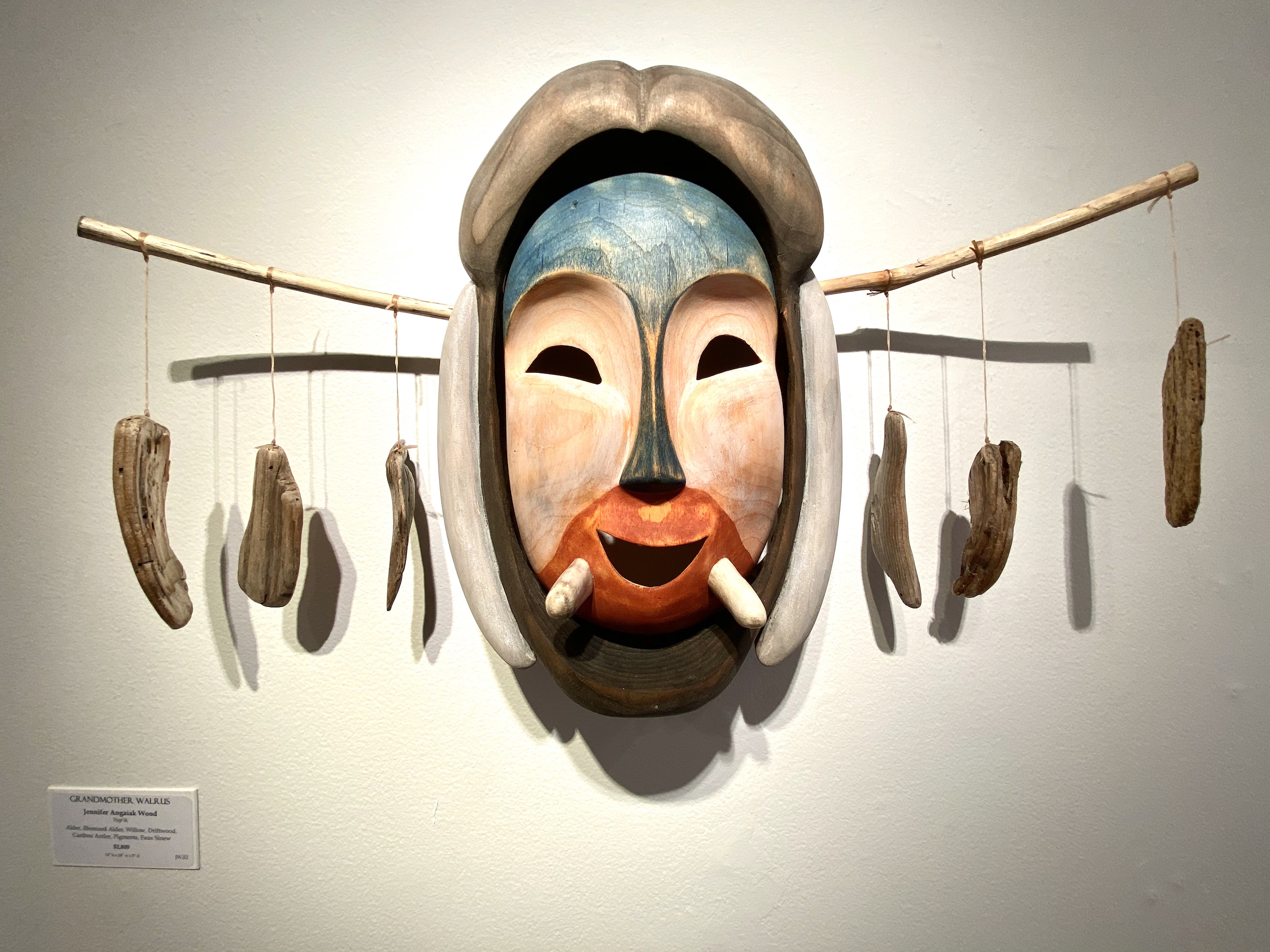 The occasion was the Seattle Deconstructed Art Fair, which I wrote about last week, and which continues through the end of this month at most participating galleries. There is so much to see! At Stonington Gallery, I was especially charmed by a new show of work by Seattle-based Alaskan Native artist Jennifer Angaiak Wood (Yup’ik), who makes masks of driftwood, antlers, feathers, beads and carved wood (through Aug. 27). Though the materials are traditional, the works have a decidedly contemporary look. In “Grandmother Walrus” a joyful human spirit emerges from the mouth of a walrus. “Anuqsuar – Breeze,” a sad-eyed face blowing through a small wooden pipe, is a reminder, Wood says, to listen to the smaller voices in the world.

Another must-see is George Rodriguez’s bold new collection of sculptures, Urban Guardians (at Foster/White through Aug. 22). For this series, the Seattle artist created elaborately tiled, interchangeable heads and bodies — kind of like gigantic ceramic Lego figures. You can pop a luchador head on a pigeon body, or an Aztec head on a seated yellow sphinx. (Well, you can’t, unless you buy them, but a gallery staffer will be happy to show you.) It’s clever and playful and also speaks to our own shifting identities, the “selves” we construct and present. 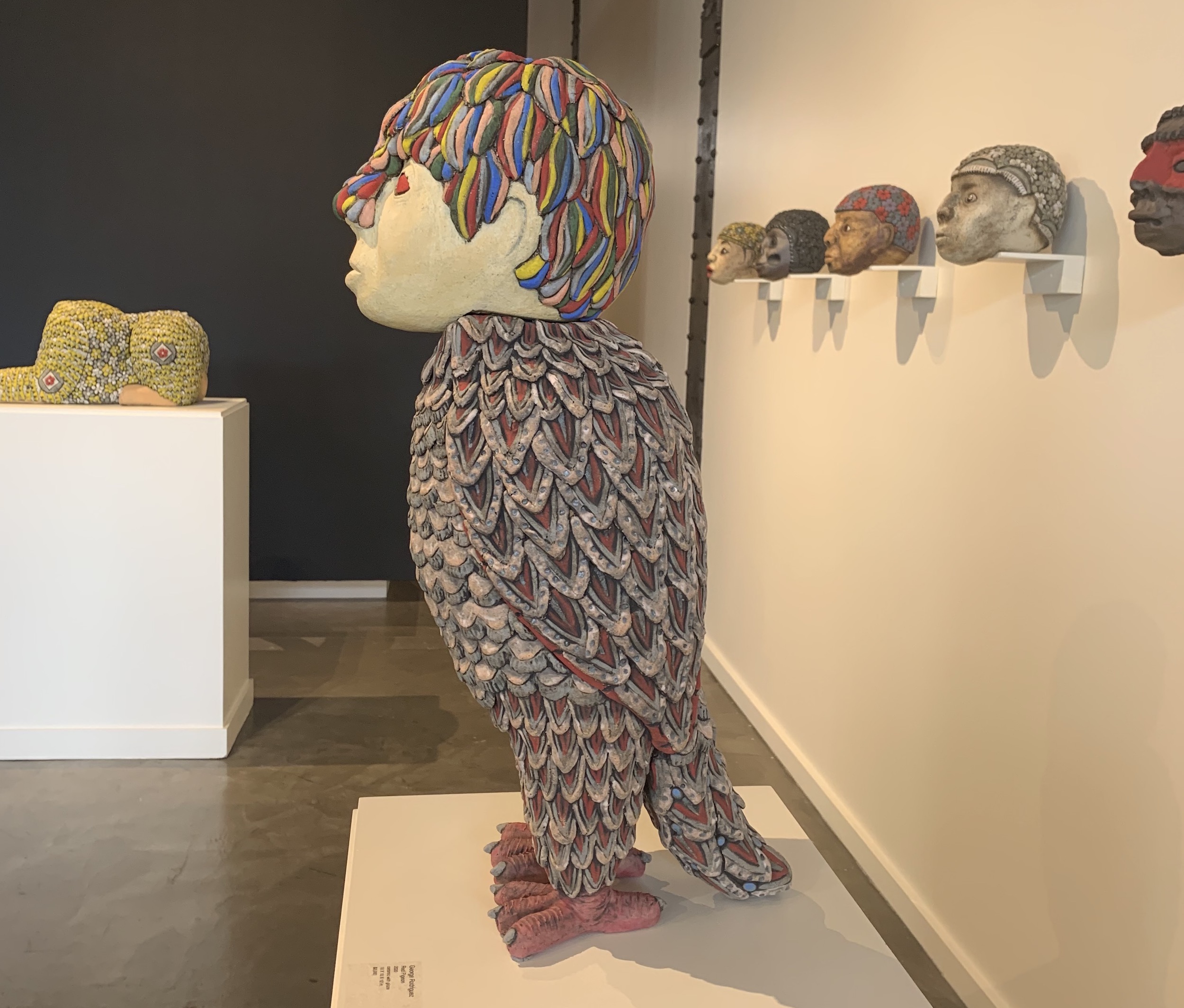 One of George Rodriguez's interchangeable heads on a pigeon body, at Foster/White Gallery. (Brangien Davis/Crosscut)

One of George Rodriguez's interchangeable heads on a pigeon body, at Foster/White Gallery. (Brangien Davis/Crosscut)

For a more external take on built environments, dive into the 10th annual Seattle Design Festival (Aug. 15-23), which kicks off this weekend in a new, COVID-friendly format. The theme is “About Time,” which I can only hope includes an explanation as to why time feels so very strange these days, zipping by while seemingly stopped.

The lineup is sprawling and multifaceted, and while the customary inclusion of highly interactive exhibits has been scratched this year, there are still many outdoor installations to check out, including new murals, community gardens, and an Augmented Reality (AR) app, Amp’Up Seattle, that presents familiar city spaces in new ways. Local artists and performers will share work via livestream, including Jite Agbro, Romson Bustillo, JR Rhodes and Caleb Fields, who will address this specific moment in time.

There are also thinky exercises by thinky Seattle architecture films, such as “Duwamish Crossing,” an effort by Wittman Estes to imagine an alternative to rebuilding the crumbling West Seattle Bridge. Instead, they envision three smaller crossings — “ecological connectors” — that are suitable for not just cars, but bikes and humans, too, making it possible to engage with Seattle’s only river up close.

Among SDF’s intriguing online screenings are “A Poetics of Living: Biomimetic Blueprints,” a very abstract title for the concrete topics explored via several films at Northwest Film Forum: one about a “living mural,” one featuring dancers moving through a garden across seasons, and another exploring the Ciudad Abierta, a utopian community in Chile founded in 1971 on the principles of an epic poem. 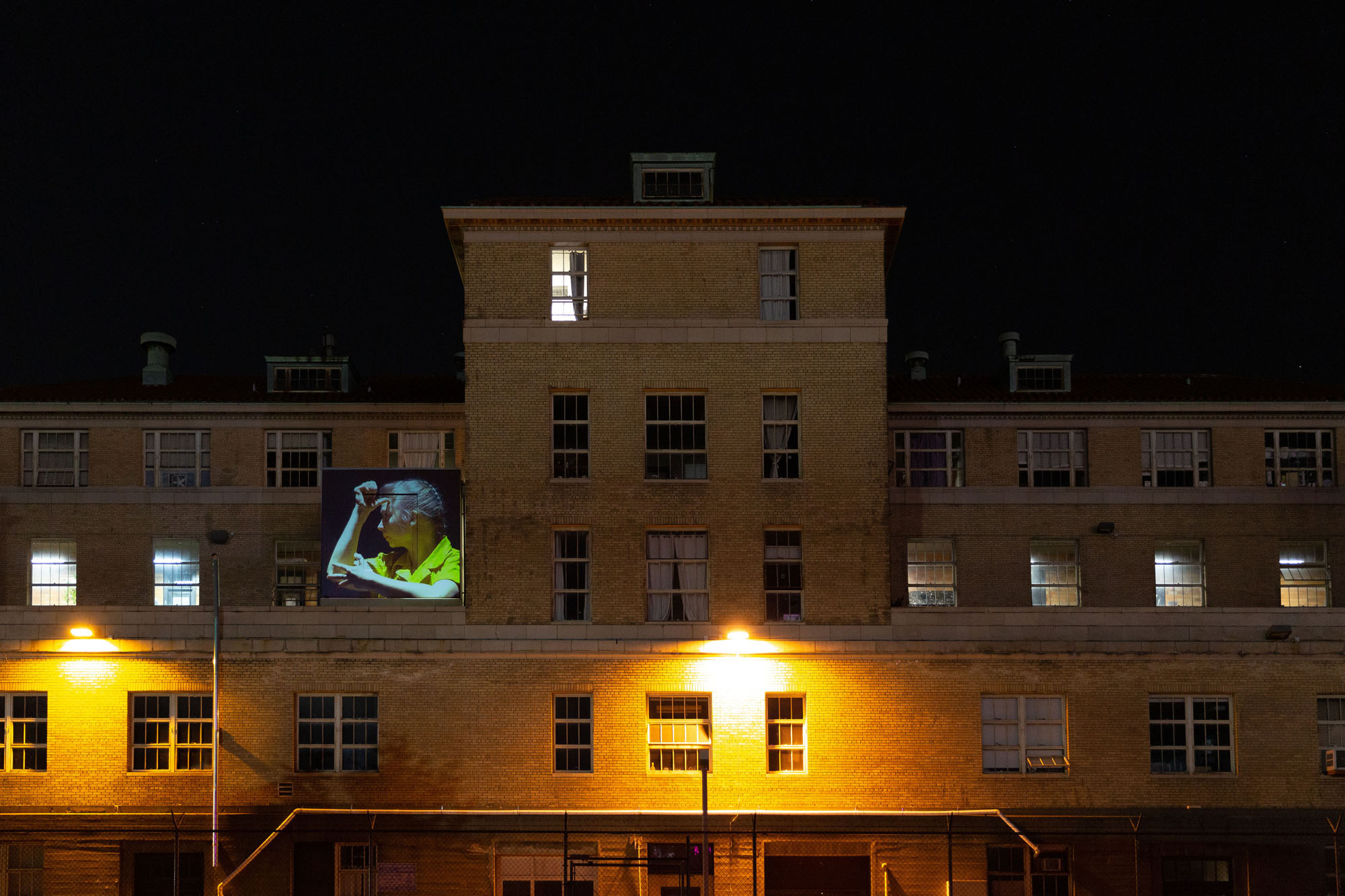 Art films are projected on the former Immigration and Naturalization Services building for 'The High Wall.' (Rafael Soldi)

Art films are projected on the former Immigration and Naturalization Services building for 'The High Wall.' (Rafael Soldi)

While returning indoors for art was a treat, I finished my weekend outdoors — because it’s August, and summer is why we live here, amiright? I took a field trip to Magnuson Park, which I hadn’t visited in a long time but which I love, both for the visible remnants of the U.S. naval base it once was and the lush lakeside wetland to which it is returning.

I sat for a while in the ample shade of a jet-black submarine fin, one of 22 installed at the park in 1998 by artist and former University of Washington sculpture professor John T. Young. “The Fin Project: From Swords into Plowshares” puts the biblical message into action by turning the objects of war (steel diving-plane fins from decommissioned 1960s U.S. Navy attack submarines) into a peaceful public benefit — in this case a place to gather amid art.

The setting is made even more inviting by the fact that the installation resembles a superpod of orcas swimming through the grass. Also taking advantage of the fins were a group of Lycra-clad bicyclists stopping for lunch, a family celebrating a birthday with a picnic and pink balloons and a duo still wet from swimming, crashed out for a nap.

Some things feel inherently summery — taking a spontaneous snooze in a park, sitting outside and watching movies projected on a wall. This is your reminder to embrace the season before the wheel of time turns once again. 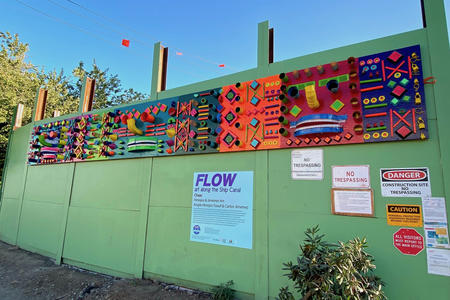 Plus: An art walk along the ship canal.

Plus: An art walk along the ship canal.