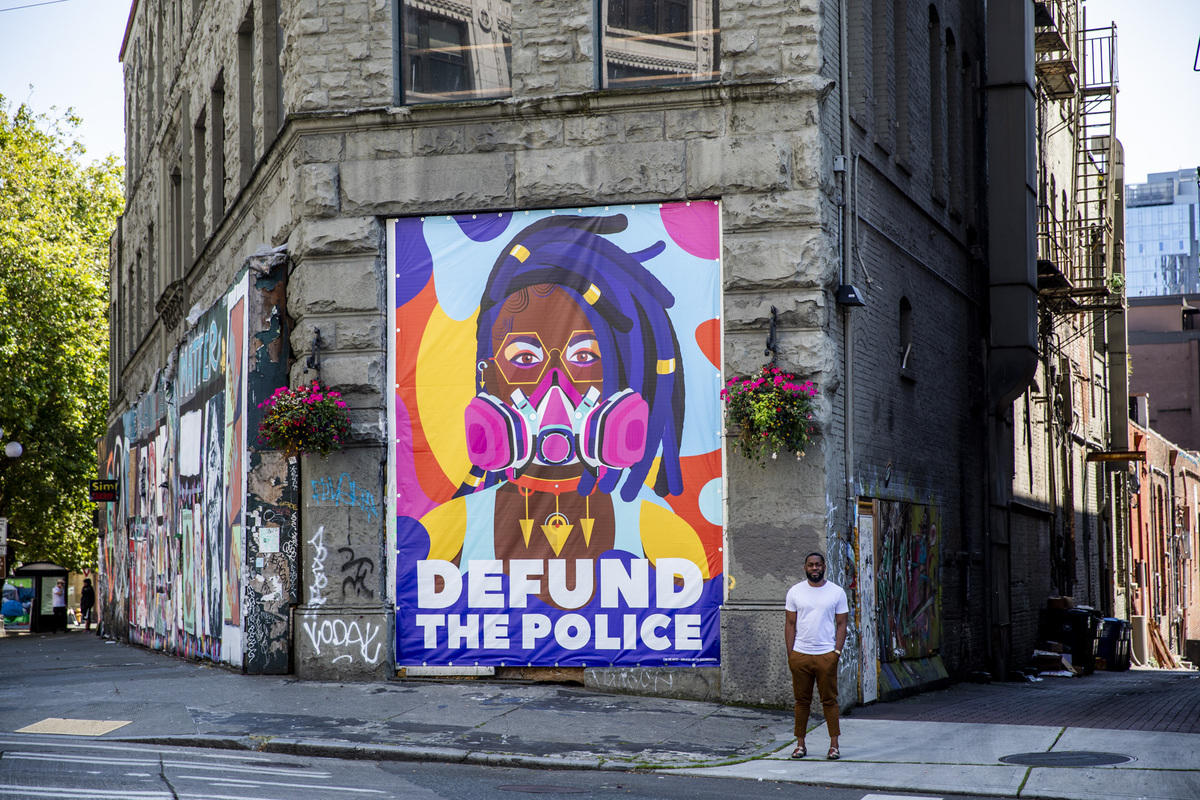 Teddy "Stat" Phillips moved to Seattle from Austin, Texas, in 2018 and has quickly made a name for himself as an artist. (Dorothy Edwards/Crosscut)

The “Stat” in Teddy “Stat” Phillips’ moniker isn’t because he’s fast. It’s short for “Statcher,” his activist grandfather’s name, which the Seattle artist uses in homage.

“My grandfather said you can stand by and be silent, or you can try to make a change for not only yourself, but for your children,” says Phillips. “If you love your kids — I don't have any, but I love them already — you want to do what's best for them. You want to try to make their world a little easier for them to live in.”

At the beginning of the Black Lives Matter protests this year, Phillips says he could hear people marching by his Capitol Hill apartment. After spending weeks in quarantine under the stay-at-home order, he decided it was time to join the fight.

Phillips was one of 16 local creatives who helped paint the phrase Black Lives Matter in vibrant patterns on East Pine Street. His letter was the “I,” which he chose to paint black, with tiny blobs of red, green, blue and yellow seeping in from the corners. Front and center of the monolithic “I” is his personal rallying cry: “For the Culture.” 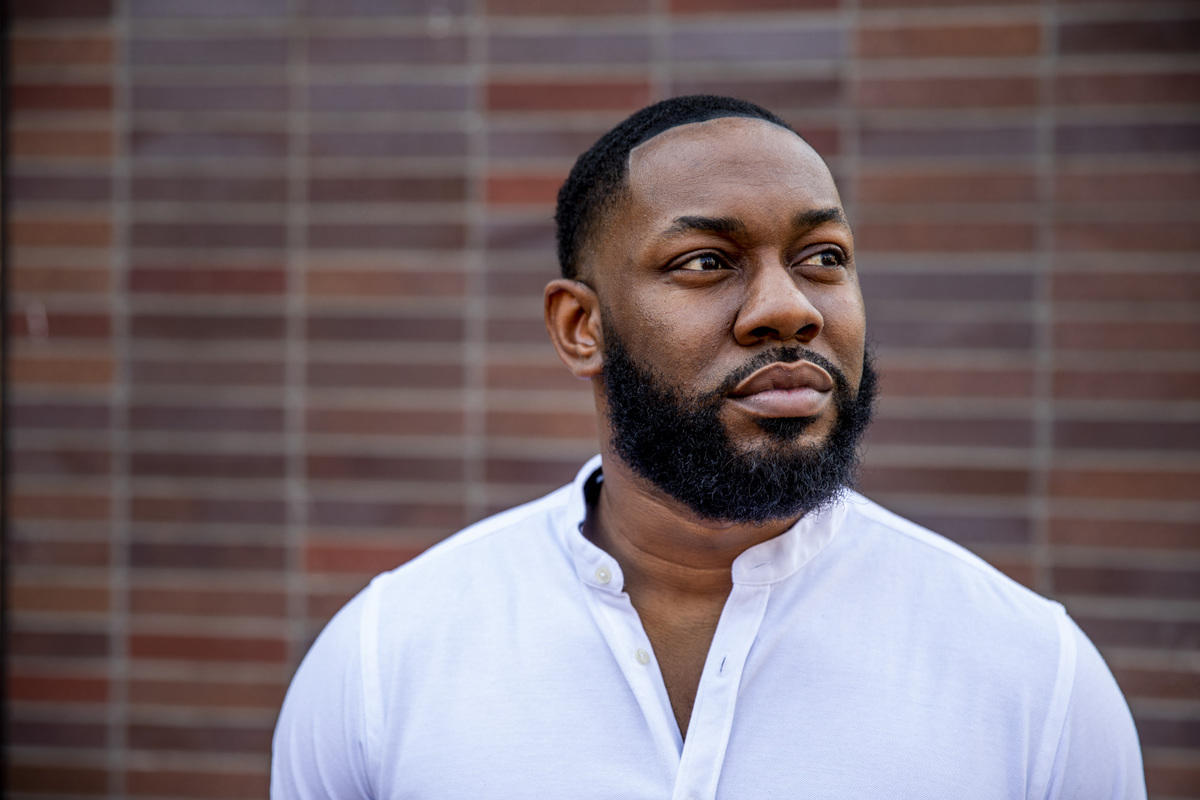 The 31-year-old Microsoft engineer is inspired by his grandfather who was an activist during the Civil Rights Era. (Dorothy Edwards/Crosscut)

The 31-year-old Microsoft engineer is inspired by his grandfather who was an activist during the Civil Rights Era. (Dorothy Edwards/Crosscut)

The words are a guiding principle for Phillips, 31. One playful way he has honored them is with a Black-centric trivia game app he created in 2017 (a personal project, called “For the Culture”). An engineer who works at Microsoft, Phillips released a sequel app in April for the Latinx community, titled “Para la Cultura.”

In the two years he’s lived in Seattle, Phillips has quickly connected with the city’s art scene.

Early this year, the artist started filling his Instagram page with glossy, pop-art portraits of celebrities such as Dave Chappelle, Kobe Bryant, Nipsey Hussle, and icons such as Martin Luther King Jr. and Frida Kahlo. When the pandemic hit, Phillips’ art featured masked nurses. After George Floyd’s death, Phillips portrayed victims of police brutality and protesters, which went viral. Shortly after, the opportunity to paint the “I” in the Black Lives Matter street mural arose. The popularity of his work has taken off to the point that it scored him a recent gig designing an armband in support of BLM for the Seattle Sounders FC.

Now, Phillips has released a series of three posters with Amplifier, the local nonprofit that creates visual campaigns for grassroots movements, from environmental efforts to social justice causes. The posters outline the three central demands of the local Black Lives Matter movement, and feature Black faces in front of lava-lamp blob backgrounds. In one, a person with dark blue dreads and baby hairs sports a gas mask with the phrase “DEFUND THE POLICE.” In another, a person wears a studded face mask above the words “FREE THE PROTESTORS.” And the third features a young Black woman in a cap and gown above the call to “INVEST IN COMMUNITY.”

Crosscut caught up with Phillips to talk about growing up in Montgomery, Alabama, how art and tech intersect and what it means to be “for the culture.”

This interview has been edited and condensed for clarity and length.

You grew up in Montgomery, Alabama. What was it like being a kid surrounded by the civil rights era legacy?

Growing up there, you kind of take it for granted. You see people come and try to see where the bus boycott was, Dexter Avenue. Martin Luther King, where he was preaching. You see it so much, it just falls to the background. You hear about history, how people fought for certain things, and you think that segregation really ended. But if you take a step back from just being in it, you understand there's a white side and there's a Black side of things. My mom knew all these things, but to protect me and to keep me positive and keep me focused, we never really had those conversations until I went to college.

Your artist name pays homage to your grandfather, Statcher. Can you tell me more about him?

He was the light of every circle. I was enamored by him in that way; people just knew him everywhere we went. He was also really serious about advancing his community and doing active protests when he was in college at South Carolina. He was saying, “Look, some things right now that you're going to stand up for aren’t going to be popular, but as they go on, the world is going to change.” He always felt the world was going to balance out and wrongs were going to be made right. He said: “You got to be focused on the future and building a better future. If you're not part of that then you're not only doing yourself a disservice.” It's something that I want to take and evolve in my life.

Like most artists, you also have a day job. What type of engineer are you?

I'm a cybersecurity engineer. I picked up the cybersecurity path from my dad, who does the same job. I basically try to figure out ways to stop hackers and malicious actors from breaking in to the company to protect all their information.

You moved here for the job with Microsoft — do you consider yourself primarily a developer or an artist?

I don't distinguish myself from the two. Art and engineering go hand in hand. 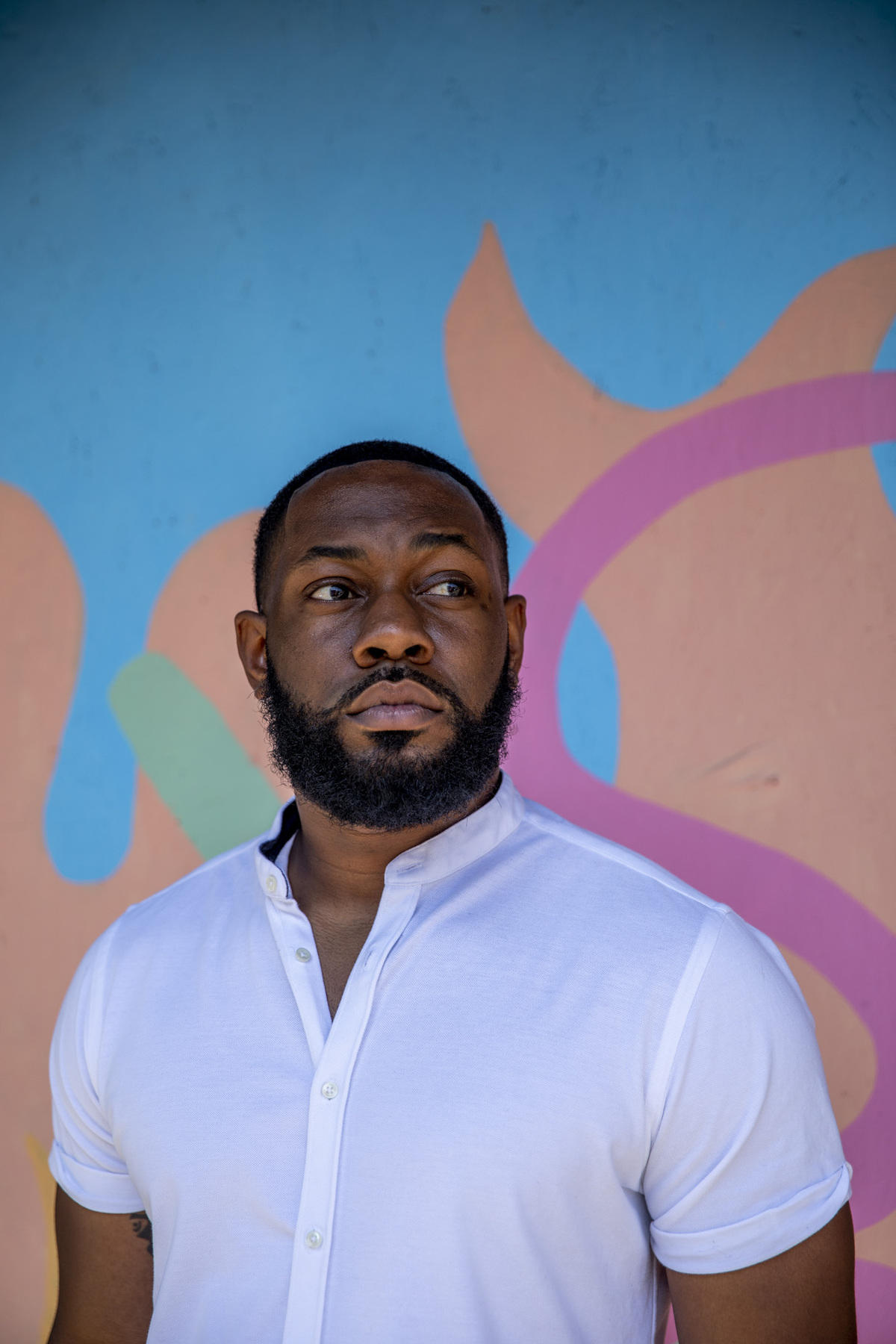 "For the culture" has always been a guiding mantra for Teddy "Stat" Phillips. It's also the title of his Black-centric triva app game. (Dorothy Edwards/Crosscut)

"For the culture" has always been a guiding mantra for Teddy "Stat" Phillips. It's also the title of his Black-centric triva app game. (Dorothy Edwards/Crosscut)

We have to be creative. First of all, we can't think of just what will work today. We have to think about the problems and the issues that are going to come up tomorrow, and then we have to figure out how to plan for scale. So think about your car. You don't want your car just to run today and then crap out. You don't want your art just to be relevant today. You want it to be relevant all the way down the road for the lifetime of the art, for it to stand the test of time. Look at the Mona Lisa, the Mona Lisa is centuries [old]. In engineering some things don't really work that way. Maybe a chair can stand the test of time. But those are the things that you think about — creativity and longevity.

Local tech has a fraught relationship with artists and people of color. How do you balance enjoying your job with the issues the influx of tech workers has created around affordability?

I sit in the middle of it. There's a disparity of Black people within the tech community. We’re at 3%. I think my vision for how people from marginalized communities can come up is being able to jump into that space and provide representation for people that can't really speak for themselves. So, trying to try to speak the truth to power. I think that's my bridge between the communities. Whether it's mentoring people at hackathons, mentoring people personally, doing resume reviews and recommending candidates to get into these tech companies that might have been overlooked in the past. That's where I fit within that whole conversation.

You’ve mentioned you’re not a painter. What do you consider your medium?

I'm basically a graphic artist. I'm super comfortable with the undo button if I mess up [using Adobe Illustrator]. Painting, I’m kind of intimidated by it, just for the fact that I just don't want to mess up. [Digitally] I can create perfect lines and move and edit things at ease. I was speaking with my friend Joe Nix [a muralist], and he was like, “Use technology to help you. You can solve things a lot faster if you just make a projection, push the projection to a wall, create your outlines and you can pretty much paint anything.” That's something that I want to actually explore a little bit more.

In the video for your Sounders project, you mention a specific painting that inspires your color palette.

Yeah, the painting “International Crisscross” by Philip Romano. The original was in this brunch spot called Nick and Sams in Dallas. As soon as I walked in, I was drawn to it. It was really the centerpiece of that space. It just resonated with me. The For the Culture app colors came from that background, and Para la Cultura colors came from that, too. I try to use that painting as my motif for my color palette.

How did you come up with the idea for the For the Culture app and how does that play into your art?

There's an app I was playing with my family called Heads Up [in which players try to guess a word floating above their forehead with only clues from friends]. I was like, “We can expand this into a new game.” So that was my project, but you gotta have someone that's graphically talented to make the game resonate with people. I worked with an artist out of Canada. His name is Aaron Campbell and he made beautiful graphic designs. He mentored me through the entire process while he was doing it and shared a lot of tutorials. To market the game [For the Culture], I needed to create content and other materials to make sure people were drawn in. That's when I started learning Adobe Illustrator.

“For the culture” is kind of your slogan. What does that mean to you?

I say the phrase a lot when my friends get down, like, “Man, you gotta do it for the culture and you gotta just keep going.” I said it so much that when I couldn't think of a name for the first app, they said "why don’t you call it For the Culture? You created it for the culture, it just makes sense.” “For the culture” is giving respect to the ancestors and just knowing where you come from, and trying to do everything to honor those people that went before you. 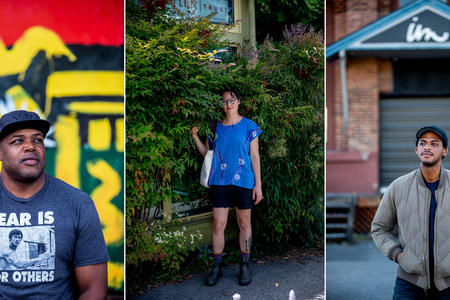