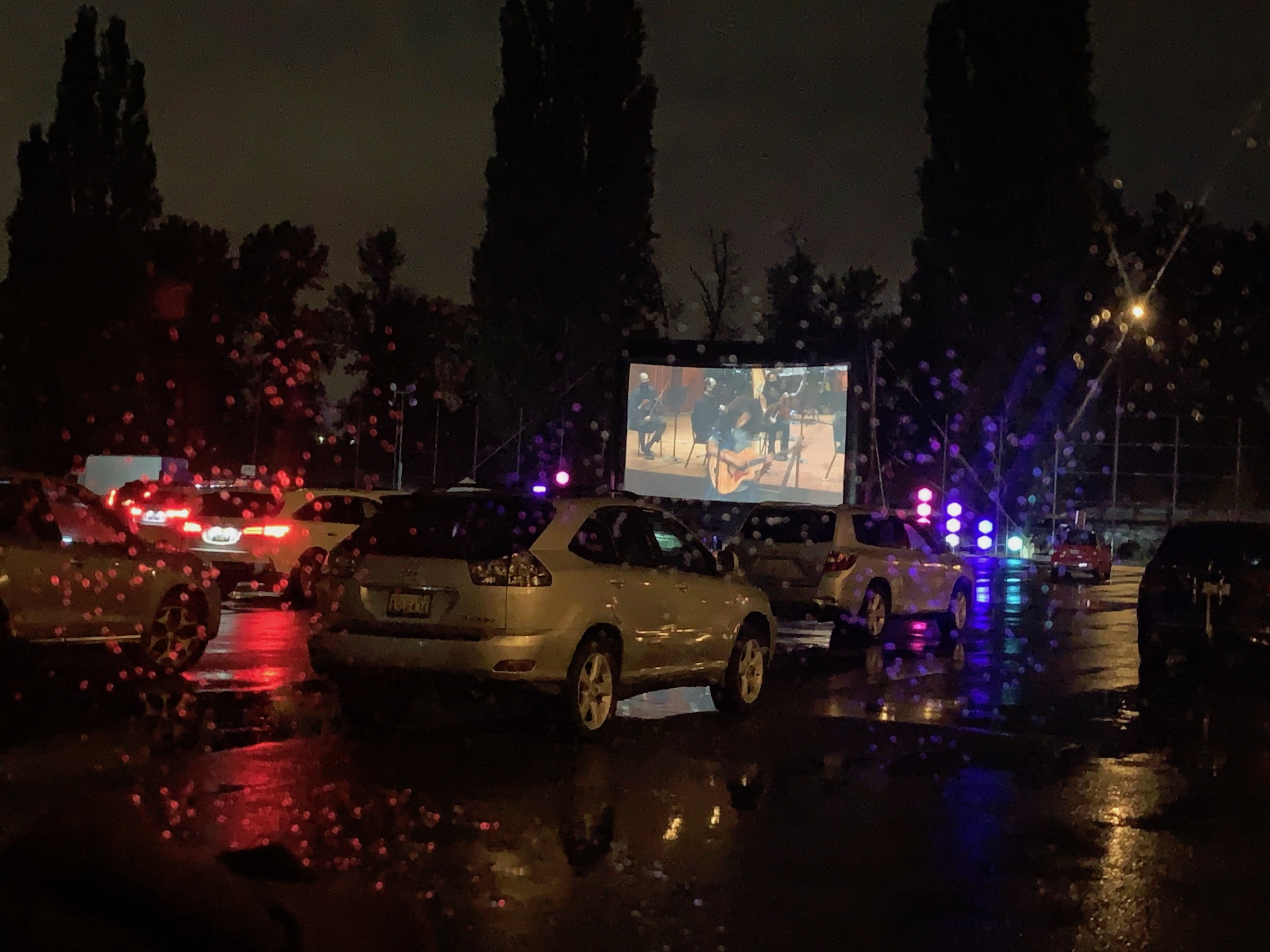 Last weekend, I drove to Marymoor Park, pulled into an outdoor parking lot, switched on the FM radio, dug into a bag of popcorn and joined the assembled car-bound crowd in peering through wet windshields to watch the evening’s entertainment on a big screen up front. It was Seattle Symphony Orchestra’s opening night, brought to you by (who else?) the coronavirus.

Social distancing mandates have given the drive-in movie format — that nearly extinct relic of 1950s car culture — a new allure. The few remaining drive-ins in our region have experienced a sudden surge of interest over the summer, and inflatable and portable screens started popping up all over. Screenings haven’t been limited to standard movie fare, either. The Drive ’N Drag show at Westfield Southcenter mall featured stars from RuPaul’s Drag Race, and a drive-in book release event in Shelton showcased Twilight author Stephenie Meyer. Not to mention Seattle’s much smaller, screen-free adaptation: drive-in dance.

Upcoming drive-in offerings include a “Carpool Cinema” screening of Jordan Peele’s horror pic Get Out in the Phinney Center parking lot (Oct. 2-3), and a four-night series of art films hosted by ever-adventurous performance space On the Boards in its tiny parking lot on Queen Anne (Oct 1-4). As COVID-19 continues, who knows what other forms our drive-in entertainment will take — perhaps a drive-in book festival like the groundbreaking Appledore event in the U.K.?

Back at the drive-in symphony, I watched as the orchestra — playing at a social distance on stage at Benaroya Hall — kicked off a streaming season with Mozart’s “Overture to Don Giovanni” and a guest appearance by Seattle singer-songwriter Whitney Mongé (she’ll reprise the performance online Oct. 2). The players looked somewhat adrift, burst apart from the standard seating arrangement, but aside from a little radio static they sounded terrific. In lieu of applause, we honked our horns and flashed our headlights from the safety of our shiny metal boxes. 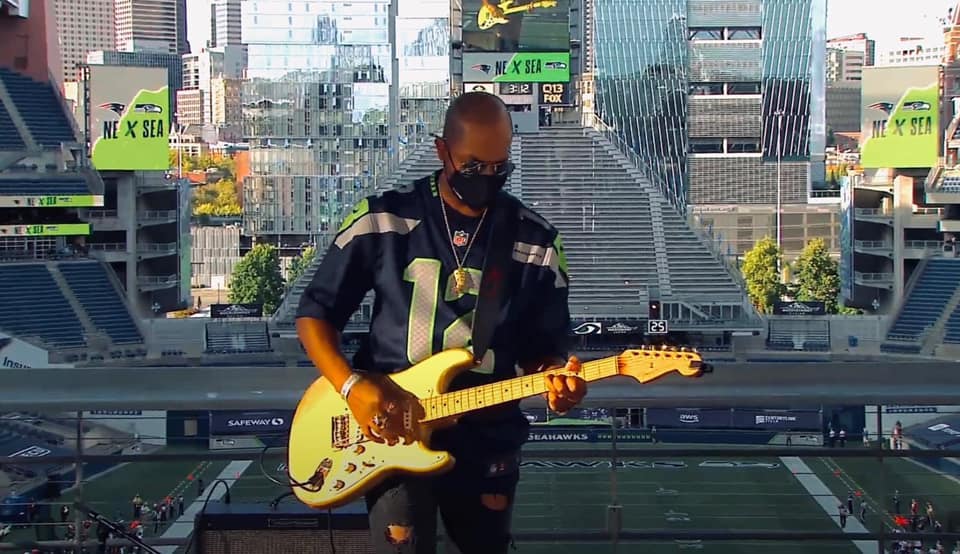 Despite the lack of concert hall acoustics (and the addition of a windshield-wiper beat), it was so very nice to see a group of people playing music together on stage. Seattle’s live music venues have been closed for six months now, with no sign of reopening soon.

It’s been a brutal hit to the local music economy, which is why venue owners, musicians and other stakeholders formed the Washington Nightlife Music Association. The coalition is lobbying governmental leaders for financial relief, and working to find other ways to sustain artists and venues during the sudden and drastic loss of income.

Another measure of support comes from the local chapter of Black Fret, a nonprofit music-funding organization that launched here in February, well before we had ever heard the phrase “social distancing.” The group recently announced a $50,000 round of funding, divided among 10 local bands chosen from myriad nominees.

Recipients include Whitney Mongé, Tres Leches, The Black Tones, Tomo Nakayama and Chong the Nomad. You can get a taste of all 10 winners via Black Fret’s custom playlists on Spotify and FreqSho (the latter with videos). This fall, the bands are streaming live concerts from Nectar lounge and raising money for other local nonprofits in the process (next up: rock band Smokey Brights, Sept. 30, benefiting King County Equity Now).

In a so-called City of Music, it’s essential that we keep listening to our musicians in whatever ways they make possible — whether that means guitar guru Ayron Jones playing a blistering but faithful national anthem at the first Seahawks home game (at an almost empty CenturyLink Field last weekend), or Northwest superstar crooner Brandi Carlile sharing an Instagram stream of her recent cover of the 1983 Tears for Fears hit “Mad World.” (If you feel the urge to lean in to our current cultural moment, the latter is a surefire way to set the mood.)

Back in the beginning of the pandemic, Seattle dreampop band Lemolo shared its own cover of the all too timely “Mad World,” with an accompanying video set in a spooky playground. That video is among the huge array of enticing films on view as part of this year’s Local Sightings Film Festival at Northwest Film Forum (online through Sept. 27). There are so many excellent offerings — all created by Pacific Northwest filmmakers — and the sudden, emphatic arrival of our rainy season makes it the perfect time to hunker down and get your stream on.

Feature films include Borrufa, the story of a Guatemalan immigrant woman who discovers her husband has a second family; Małni: Towards the Ocean, Towards the Shore, a lush, meditative wander through Northwest woods with dialogue spoken mostly in chinuk wawa (Chinook jargon); and The Invisible Father, a documentary by Seattle filmmaker Thérèse Casper, who tries to learn more about the parent she never knew, beat poet and underground filmmaker Piero Heliczer.

I’ve already watched several of the films, and two have stuck with me for their portrayal of artists whose creative lives are fully blended with their “regular” lives. In The Invisible Father, the poet Heliczer (who hung around in the 1960s with Andy Warhol and The Velvet Underground) seemed fully incapable of resisting his artistic impulses — even when they threatened his family life and personal health. By all accounts he was a tremendous artist, but his total commitment to craft made him dangerous to love.

In the short documentary Lady Krishna (featured in one of many intriguing short film packages), filmmaker Adrienne von Wolffersdorff presents the Seattle icon in all her power — punk rock singer, avant-garde fashion plate, abstract painter — and reveals how she too has no division between her day-to-day life and her art. Watching the two films in close succession, I noticed how different this choice looks when it’s a man vs. a woman making it. With Krishna, I also cherished the chance to experience her as a messenger from old Seattle — pre-coronavirus, pre-tech boom — exemplary of the time when creative folks could afford to be scrappy artists and indie musicians in this rainy Northwest borough.