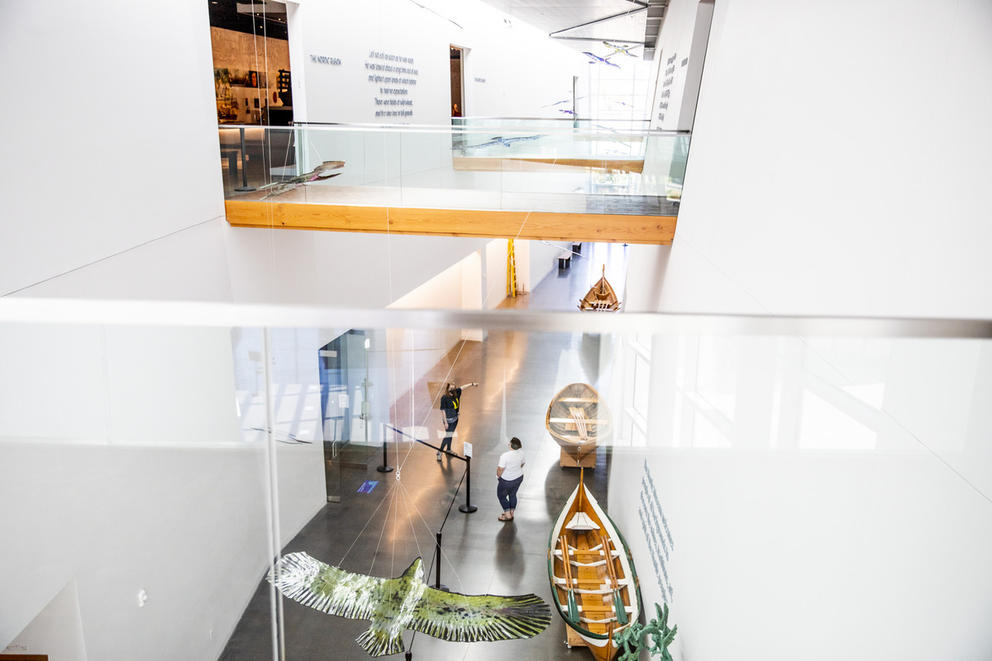 On a recent afternoon, the National Nordic Museum stirs from a slumber that has stretched nearly six months. Outside, a landscaper trims the greenery back into neat archipelagos. Indoors, registrar and collections specialist Kaia Wahmanholm whirls through the tall, fjordlike space, moving a ladder, turning on a video screen, adding decals to the floor to remind people of social distancing. Next, she carefully rolls three 10-foot-long Viking boats back into the central hall, now divided into one-way aisles by black stanchions with retractable belts.

“It feels like we’re about to embark on something brand new,” Wahmanholm says, “like the grand opening we did in 2018.” Except, of course, this time is different. Reopening a museum midpandemic means navigating completely uncharted waters.

When the National Nordic Museum closed March 13 to help curb the spread of the coronavirus, it was among the last major Seattle-area museums to do so. Now, on Friday, it’ll be the first to reopen to the public, with a Scandinavian fashion exhibition that hasn’t been open to the public since its March installment. Also on view: a slew of coronavirus safety precautions, including one-way aisles, hand sanitation stations and social distancing stickers polka-dotting the floor.

Like so many museums in Washington state, the National Nordic Museum has been in a holding pattern for months, circling above an eventual opening in Phase 3 of the state’s “Safe Start” plan. The museum sector got cleared for landing Aug. 20, when Gov. Jay Inslee allowed museums to open “earlier” as part of Phase 2. Now, at the tail end of what is traditionally their high season, museums in King and other Phase 2 counties can reopen, but only at 25% capacity.

The announcement arrived as museums across the world are facing steep budget shortfalls and, for some, the prospect of permanent closure.

“It really didn’t come a moment too soon,” says Karen Hanan, executive director of the Washington State Arts Commission, about Inslee’s announcement. “Seattle Art Museum, the Museum of Flight, the Nordic Museum, they have all laid off or furloughed many people,” says Hanan, who oversaw the sector’s push for permission to reopen before Phase 3. With federal Paycheck Protection Program loans, emergency funds and operating capital drying up, “more furloughs, more unemployment, more loss of revenue [were] coming,” she says.

The losses have already been devastating. But for now, Hanan says, the ship has steered clear of a second iceberg. Reopening at a limited capacity means that museums can bring back furloughed and laid off staff and start reviving flatlined gift shop and ticket sales.

Timed tickets, that is: Staggered entry is one of the major social distancing tricks in the new museum playbook, along with one-way aisles to avoid run-ins (so no wandering back to admire that first painting again). Security staff will make sure visitors don’t get too close to the art — and each other. 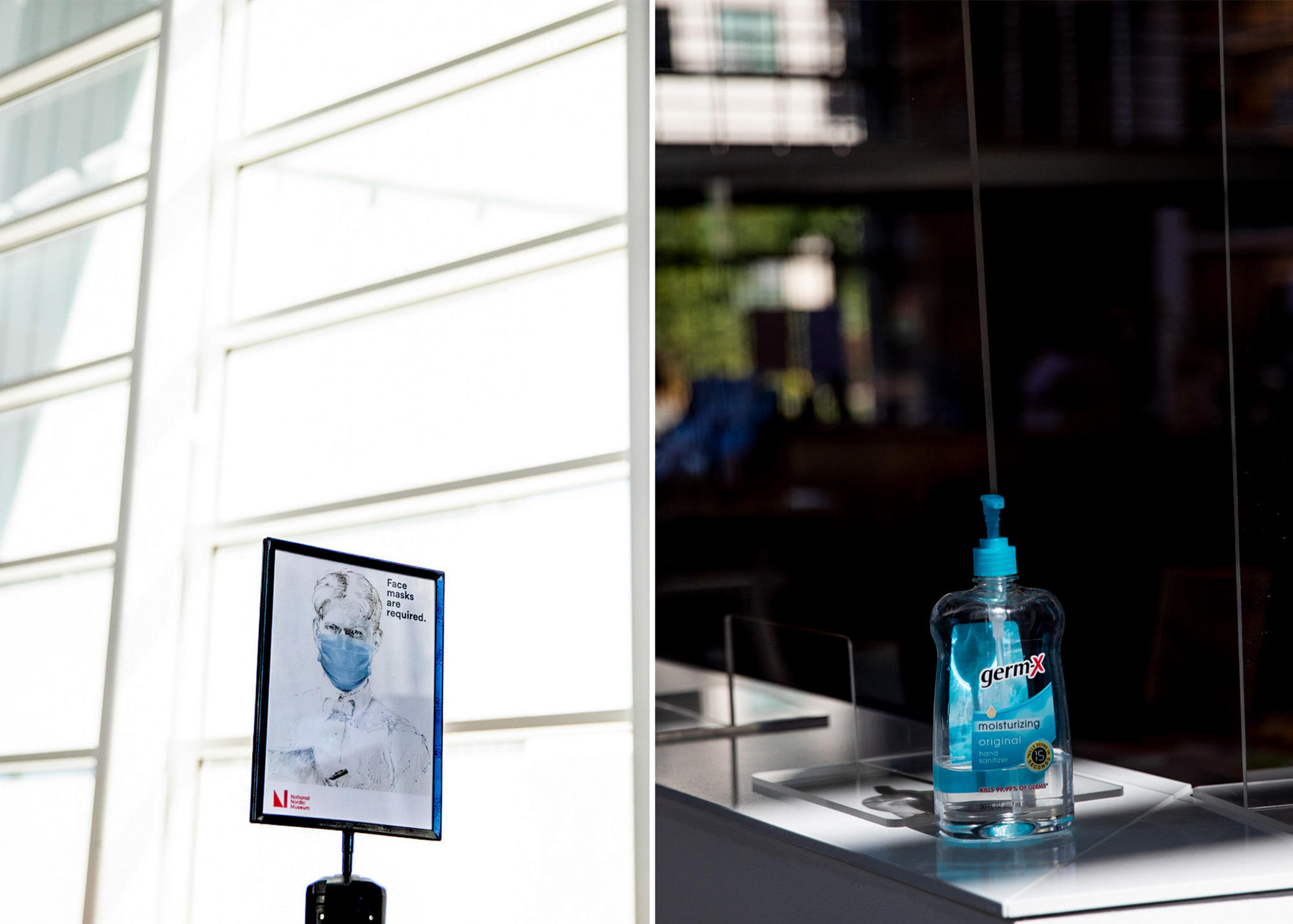 Visitors above the age of 2 will have to mask up when visiting Washington state museums, according to guidelines issued by Gov. Jay Inslee in late August. (Dorothy Edwards/Crosscut)

Visitors above the age of 2 will have to mask up when visiting Washington state museums, according to guidelines issued by Gov. Jay Inslee in late August. (Dorothy Edwards/Crosscut)

Some art lovers might balk at the thought of being funneled through a museum like crowds in the airport. But Seattle Art Museum Director and CEO Amada Cruz sees at least one upside: “There will definitely be fewer people in the galleries,” she says. “It could be a much more pleasant experience.”

Though the governor has issued specific guidance, including mandatory mask-wearing for every museum visitor over age 2, many museums are beefing up the requirements with extra measures. The Seattle Art Museum has closed its coat check, eliminated printed maps and spaced artwork labels to avoid people clustering to read them. “It sounds silly, but those are the types of things we have to think about now,” Cruz says.

One thing the art museum did not have to think about: covering up signs that say, “Please touch.” That’s exactly what the Museum of Pop Culture (MoPOP) had to do with its 3D-printed, braillelike artwork replicating tattoos, an interactive element of the current exhibit on tattoo culture.

As a highly interactive museum, MoPOP had to rethink its entire approach, implementing more than 100 changes to the exhibit floor. Always wanted to touch the 1959 Cherry Sunburst Gibson Les Paul guitar? Start singing the blues. Its allure has landed it in storage. At the Fantasy Worlds of Myth and Magic exhibit, the plastic pine needles strewn about the gallery floor for a mystical forest feel have been swept away — deemed another surface the virus can attach to. Headphones are also a no-go. Sound and video will now play automatically when visitors approach, thanks to a proximity trigger.

Other museums have had to get creative as well. When the Wing Luke Museum of the Asian Pacific American Experience reopens later this fall, you won’t find the sticky notes or slips of papers it often uses for audience engagement. Museum staff members are instead encouraging visitors to answer prompts (such as “How do you identify”) verbally with the people they are with, until the museum is able to invest in digital and touchless interactive options.

It’s quite a shift for museums that have grown accustomed to adding interactive elements to every show — a return to a more passive experience and an inversion of the trend towards touch screens at each exhibit. 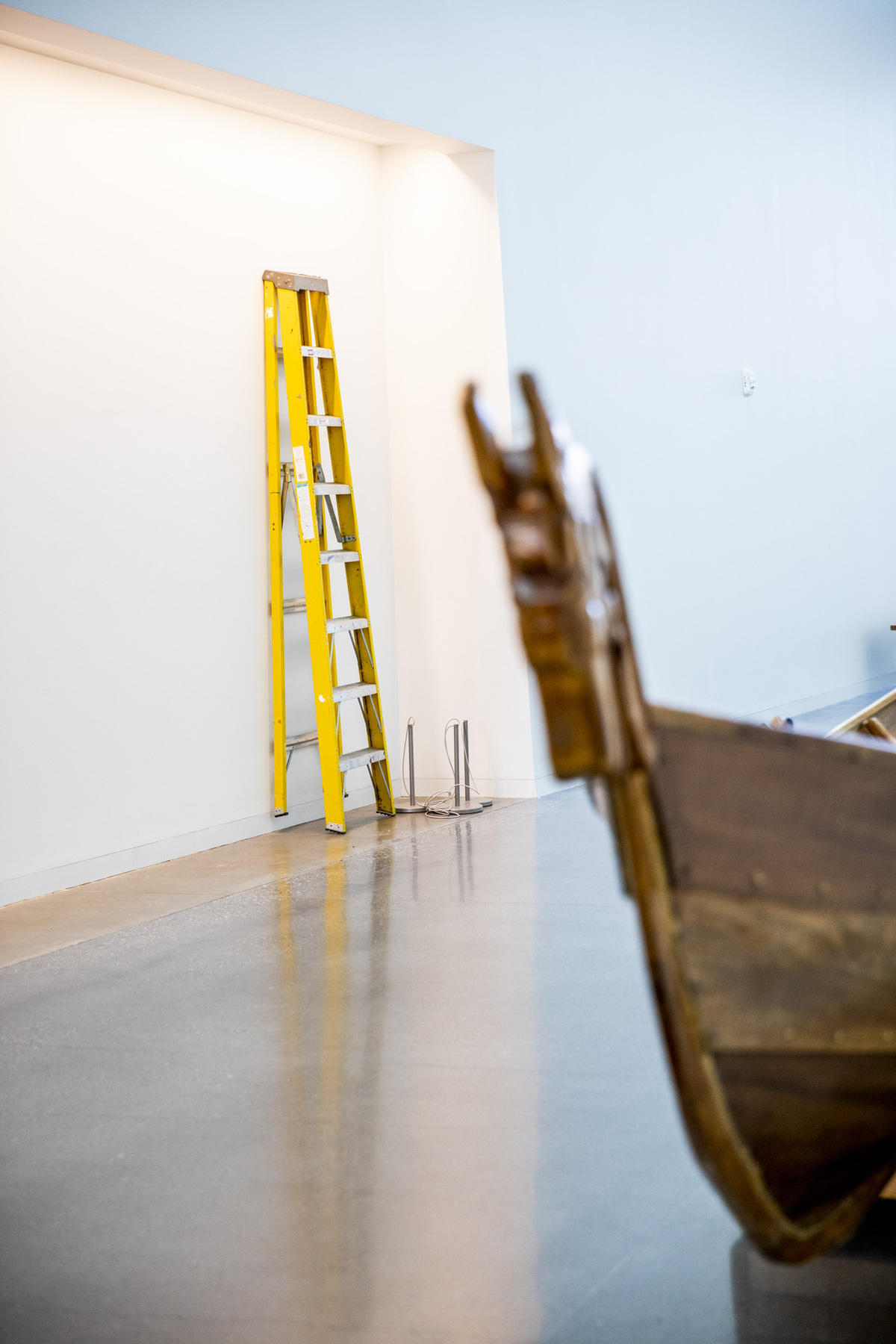 The entryway of the National Nordic Museum, which, on Aug. 27, buzzed with prep work for its early September reopening. (Dorothy Edwards/Crosscut)

The entryway of the National Nordic Museum, which, on Aug. 27, buzzed with prep work for its early September reopening. (Dorothy Edwards/Crosscut)

For some, the tradeoff is not worth it. Last week, the Children’s Museum of Tacoma, which features interactive playscapes, announced it won’t reopen until next year. In Seattle, the Pacific Science Center also plans to keep its exhibits closed to the public for the time being. “The ‘no touching’ requirement makes it impossible to provide the hands-on interactive experiences that guests expect from us,” a PacSci spokesperson told Crosscut.

Even if they don’t incorporate hands-on experiences, many museums face a similar tricky choice. From touchless thermometers to new exhibit technology, it’s a serious financial lift with no assurance that the audience will come back.

“There’s a huge financial consideration for doing all that work to safely reopen,” says Wilkening. “For virtually all museums, [the cost] will be greater than the admissions they could hope to get at 25% capacity.”

“Hope” is key here. Many in the museum industry say they don’t expect visitor levels to reach even 25% of their regular capacity. Attendance at Seattle’s aquarium and zoo, each of which has been open for longer and has outdoor exhibits, has stayed well below that limit.

“Around the country, museums which have reopened are seeing only 5% to 25% of visitors returning,” The Tacoma Art Museum notes in a recent press release announcing it would stay closed for the foreseeable future, along with other Tacoma-area museums. While keeping its doors closed is a way to help curb the spread of the virus, the release goes on to say, “until many visitors feel safe returning to the Museum, it is also true that we are worried about the fiscal wisdom of reopening right now.”

Sadie Thayer, president of the Washington Association of Museums and director of the Kittitas County Historical Museum in Ellensburg, confirms the trend at her museum, which has been open (in Phase 3) since late June. “We’re not going to see a real rush to return to the museums,” she says. “In my own institution we're seeing people come in, but it's a trickle, not a flood.”

Much will depend on comfort levels, says Wilkening, the museum consultant. Her research suggests visitors have what she calls “individual hierarchies” about what spaces seem lower risk. “Botanical gardens feel very safe, while a small children’s museum probably doesn’t feel as safe, because it’s a lot of smaller spaces and lots of hands-on,” she says. “SAM would probably feel very safe, it’s got big rooms. Guided tours of a smaller historic site, not so much.” 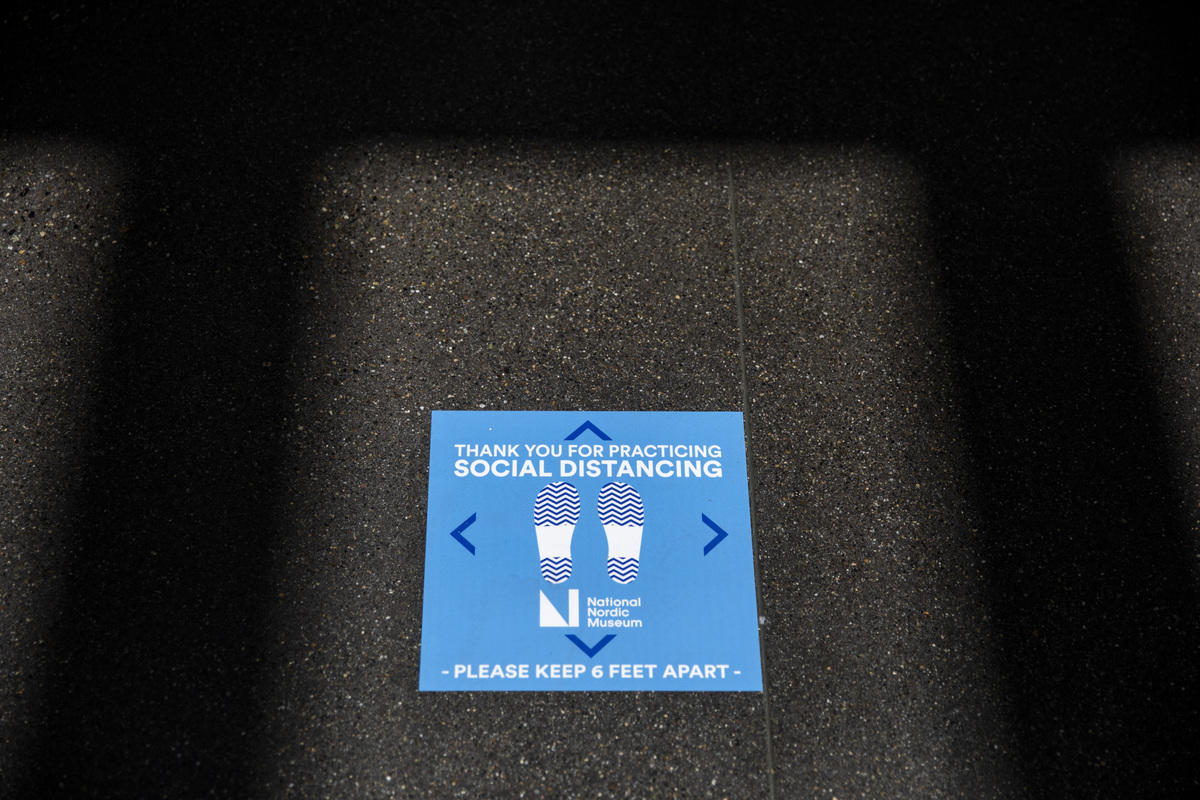 Still, exhibit-based cultural organizations nationwide (whether museums, aquariums, zoos or science centers) can expect a 63% drop in 2020 attendance according to cultural data researcher Colleen Dilenschneider. And it likely won’t get much better for a while. Even without another wave of closures, she predicts attendance won’t get back up to 2019 levels until 2022. And even with a vaccine, “museums are unlikely to simply pick up where they left off in terms of attendance,” she notes.

If they reopen at all. Without a major influx of private cash or more government bailouts, Wilkening estimates 20% to 25% of U.S. museums will never reopen. “Right now, in terms of cash flow for museums, it’s still really grim,” she says. “The status quo is devastating.”

Specifically at risk, experts in the museum sector say, are smaller institutions — which make up the majority of Washington state’s 600-plus museums. Many of these are heritage organizations that don’t have major donors or sponsorships and rely on volunteer power, tickets and gift shop sales to stay afloat. Some of these museums did not qualify for first-round relief funding or loans, and might not be able to count on volunteers to staff a reopening.

Thayer of the Washington Association of Museums points to the Bellingham Railway Museum, which closed permanently in June. She’s afraid more will follow. What if we lose more of our small museums and, with them, the cultural artifacts that tell stories about communities across the state? “Is it going to be a garage sale?” she asks, wondering where the collections might end up.

“When we lose some of these museums, [that’s] irreplaceable cultural heritage,” Thayer says. “Communities would lose a true part of themselves.”

by / January 19
Inside Crosscut