Nathan Chan moved from New York City to join the Seattle Symphony Orchestra in 2017 and has since become assistant principal cellist. (Mike Grittani)

Before he could read, let alone read sheet music, Seattle Symphony cellist Nathan Chan had already conducted an orchestra through Mozart’s Variations. At 3 years old, Chan directed the San Jose Chamber Orchestra —  and had to stand on a chair to see over the podium.

The former child prodigy chalks up his early classical music chops to an unlikely and short-lived technology.

“My parents had these amazing things called laser discs, which were giant DVDs, and there were recordings of great orchestras with conductors like Herbert von Karajan, Seiji Ozawa and, of course, Leonard Bernstein,” he says, excitedly. “I happened to have an affinity with them, and emulated them.”

The young Chan would run to the kitchen, grab a chopstick and pretend it was a baton. His imitation was pretty good — so good that his skills caught someone's attention during a live concert he attended with his parents. Sitting just a few rows behind him was Sara Jobin, the San Francisco Opera’s assistant conductor. Jobin eventually mentored Chan until he began formal cello lessons at the age of 5.

Now, Chan is a 26-year-old musician recording his own videos, breaking his cello out of the classical world and onto YouTube, Instagram and TikTok. One second he’s “going rogue” backstage at the Seattle Symphony, re-creating the two opening notes of Dr. Dre’s “Still D.R.E.” Next he’s covering the theme song from this year’s videogame hit, Animal Crossing: New Horizons. His YouTube channel, where he posts new videos at least twice a month, has 48,000 subscribers.

In 2017, Chan left New York City to join the Seattle Symphony and has since become assistant principal cellist. A graduate of both Columbia University and The Juilliard School, Chan has played with orchestras around the world, performed at Carnegie Hall and was recruited by soul singer Roberta Flack to record on a Beatles tribute album.

Having just completed a virtual event with Emerald City Music, where he is an artist-in-residence this fall, Chan is set for his next concert, playing Mendelssohn’s Violin Concerto with the Seattle Symphony (Oct. 29, 7:30 p.m.). The musicians must take the Benaroya Hall stage spread at a safe distance, rather than sitting elbow to elbow, but Chan doesn’t mind. “Musicians are consistently making hundreds of micro-adjustments,” he says, "so this does not faze me.”

You’ve been playing cello since you were 5. Do you remember why you chose that instrument?

A lot of the times in these amazing conducting videos, in particular the recording of the Berlin Philharmonic with Beethoven No. 5, there’s a section where the entire double bass section is playing these two, very low, powerful notes. I remember being very drawn to the sound and the immense size of the double bass. I wanted to play the double bass at first, but I was, and still am, a smaller person. [My parents] said, “I think this instrument's a bit too big. We better take it down a notch.”

How do you think you are redefining what it means to be a classical musician?

I've always hated the notion that classical music has some sort of barrier to entry. The reason why I love playing pop covers and love sharing what I do with people online is because I want to reintroduce this friendliness and approachability to classical music. In some ways, classical music has always resided within the [concert] hall. Now, more and more people are using technology to bring that music to a greater audience.

It placed an interesting separation between my existing work and my new projects. It gave me a chance to think; Why do I do what I do? Having to take a lot of my music from the live experience to the online world was affirming. ... It's something I had always been doing. Having that experience be the only option was very eye-opening. Although it reaffirmed a lot of things that I did online, it also made me appreciate the power of people coming together in a public space to share in something special.

Do you think the pandemic has affected the way people value arts and culture?

Absolutely. I think one of my favorite viral things that was shared during the height of the quarantine was “try going a day without watching Netflix” or a podcast or reading a book. These are things that nourish the soul. They keep us healthy in a way that is intangible, but extremely important. I feel honored to be in an industry where we provide that nourishment. It reinvigorated and reaffirmed my purpose of being an artist.

As an artist, I feel it's difficult to visualize what our lives will be like in the future if Trump is elected. One of the most encouraging things I watched was a wonderful video from a Biden event hosted by Yo-Yo Ma, one of my great cello heroes. He was speaking from the perspective as an Asian American and how important it is that we all come together, especially during this administration. There's been a lot of negativity expressed towards Asian Americans and it's quite dangerous and something I am worried and scared about. I know my parents think about it a lot, being immigrants, how important it is for us to be accepted and loved by our country. Election night’s going to be full of heavy drinking. 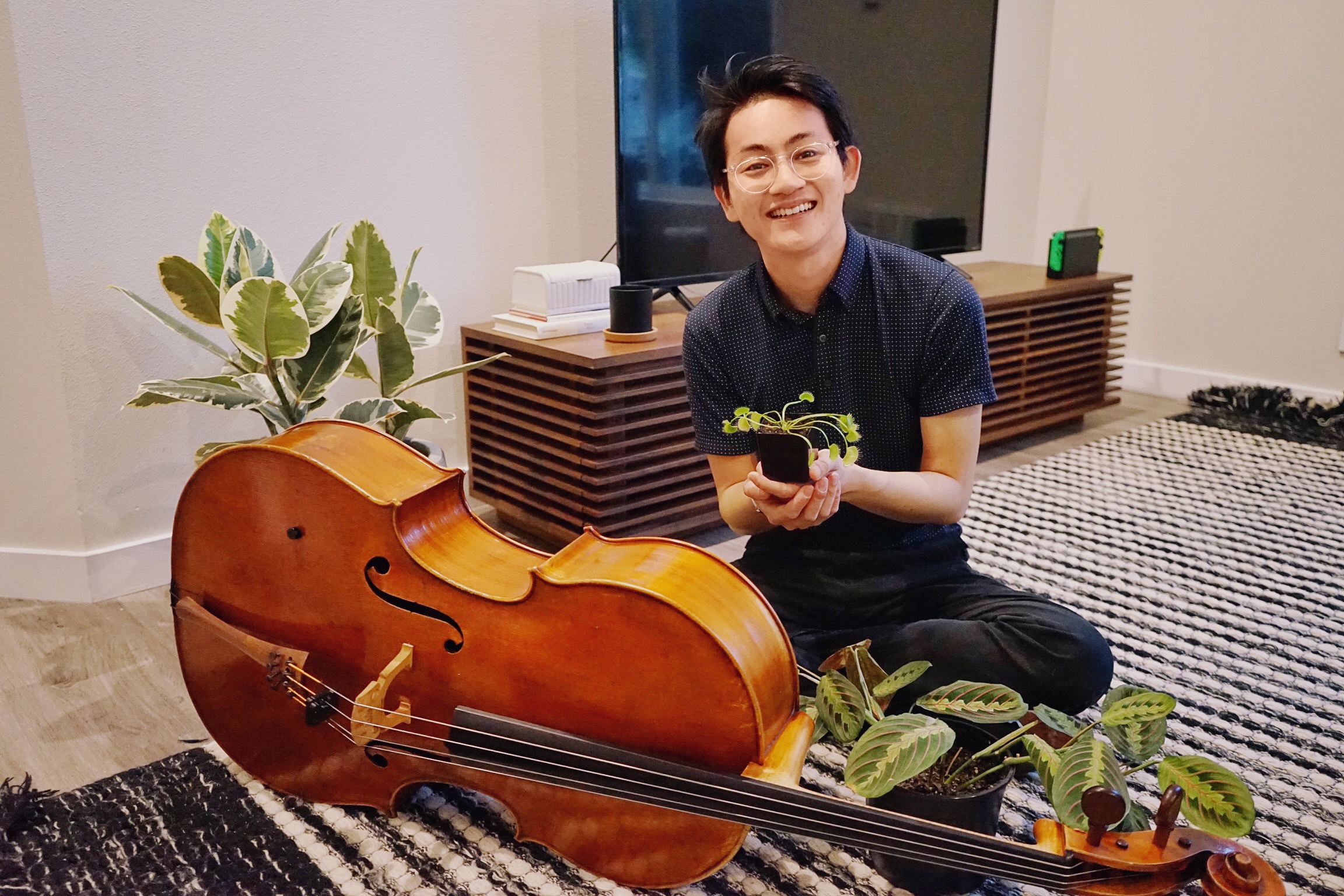 What object in your home have you found to be grounding or inspiring during this time?

I've actually been getting into indoor plants, and it's something that's been keeping me happy. I love talking to them and playing with the young sprouts that are growing. It's like a whole other living thing that responds to you. I love my prayer plant. It moves up and down during the day. I love watching it. My second plant that I acquired over the pandemic is a Venus fly trap. I like it when they move around — it’s like they have a mind of their own.

What art form outside your own has kept you going?

I've been reading a lot of books lately. The book I'm reading right now is Can't Hurt Me by David Goggins. It’s an incredibly intense book about a very troubled person's life and how he's found strength. I'm also getting inspired by beautiful furniture. I'm a huge fan of Charles and Ray Eames. I've been really into the midcentury modern look, [which] looks beautiful with plants.

What’s your experience been with the Seattle Symphony’s livestreamed concerts?

We're social distancing, sitting 6 feet apart and we get COVID-tested every week. It's not exactly 100% back to normal. It reminds me what an important component an audience plays. I love feeding off the energy of an audience. Not having that is a unique challenge as a performer. You have to dig deep and find the love that you know is there in a slightly different way.

You have a lot of dope cello covers of pop music on your YouTube channel. What about the cello makes it a great instrument for contemporary songs?

The cello can play both a supporting and a leadership role with the range of its sound. It's a great instrument for accompanying other people that are singers or [playing] other instruments. But it can also play that role of soprano or pop singer.

Do you have a favorite cover you’ve played?

[It’s] technically a classical song, but it's influenced by bluegrass and jazz. The name of the song is “Julie-O” by Mark Summer. The most striking thing about this piece is in the middle, you set the bow down and you turn your cello into a percussive instrument. I remember growing up going to classical music camp, watching one of the teachers play this piece and how astonishingly cool I thought this piece was. That broke me out of the classical music mold and taught me that great music is great music.

I love TikTok. The thing that I love the most is the repurposing of sounds. When I'm walking around through life, I think a lot in sounds and music and to see it expressed so well in a platform is very satisfying as a creator.

If you had to pick one artwork that encapsulates 2020 what would it be and why?

As a joke I want to say “WAP” by Cardi B. But I think a better song is “Yesterday” by Paul McCartney. That's very poignant now. The juxtaposition between what things were, how things are now and what they might be in the future.

Doubled down on bringing together communities.