​​​​​​The powerhouse franchise has become the city's most triumphant sports organization — and they still don't have a permanent home arena. 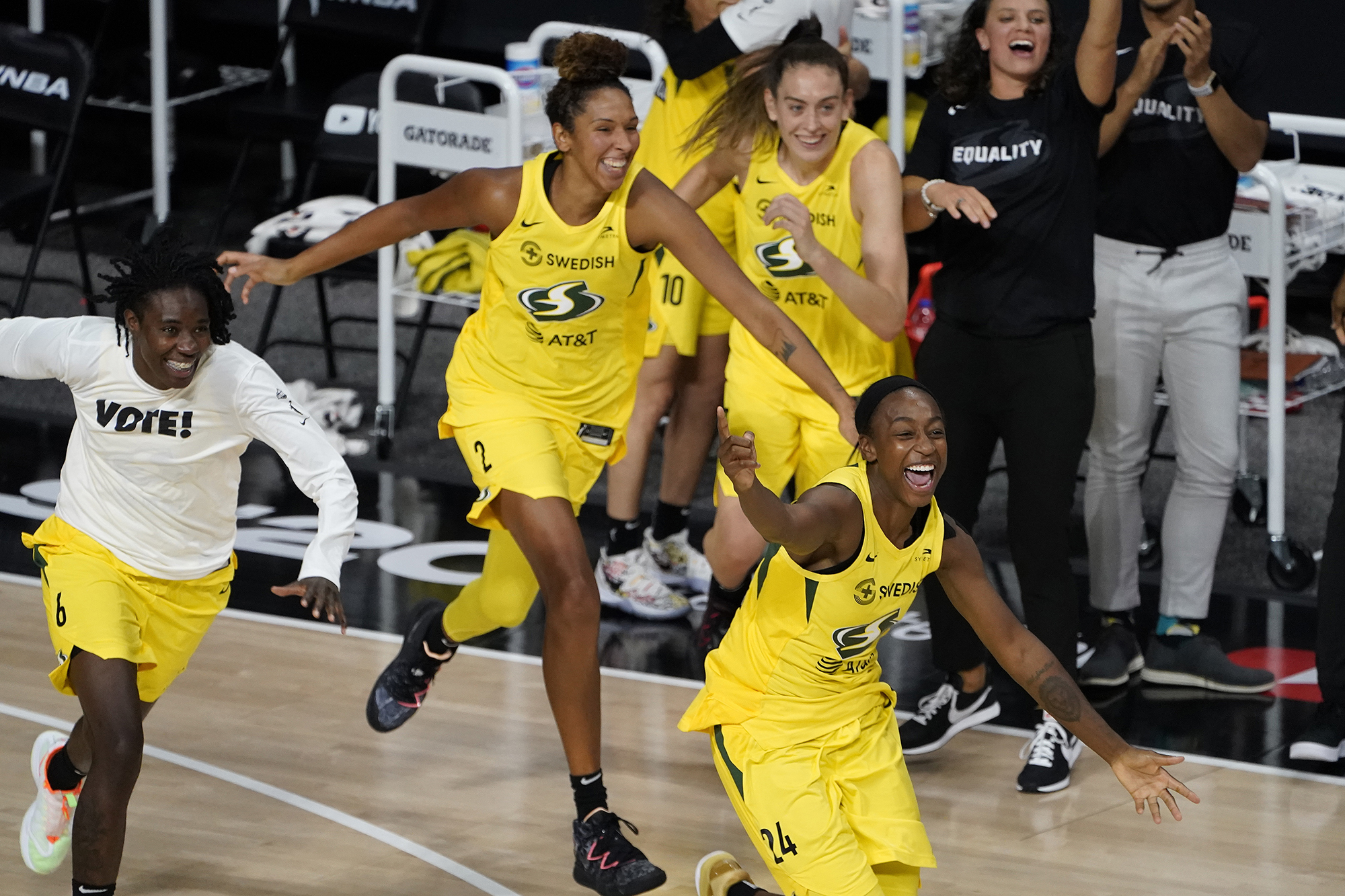 Members of the Seattle Storm rush the court after the team defeated the Las Vegas Aces wo win the WNBA Championship Tuesday, Oct. 6, 2020, in Bradenton, Fla. (Chris O'Meara/AP)

The Seattle Storm should make it look harder to win championships, if only so we better appreciate how much work they do to bring them home.

Seattle’s most-decorated professional sports team just won their fourth national title after sweeping the Las Vegas Aces 3-0 in an echo of both their 3-0 win against the Washington Mystics in 2018 and their 3-0 victory over the Atlanta Dream in 2010.

The Storm didn’t just sweep their opponents this time around, they made a statement with a final score of 92-59 in Tuesday night’s title-clinching game. Finals MVP Breanna Stewart scored a whopping 85 points across the series. Even more impressive is the fact that 39-year-old Seattle sports legend Sue Bird has been on all four Seattle Storm championship teams to date, stretching back to 2004. (Bird is turning 40 this month, and she just got 33 assists across three games. After her win, Bird joked that she doesn’t like to ask her teammates “how old they were in 2004,” but she’s got no reason to be self-conscious: I’m 33 and I have to stop for breath three times between Second and Third avenues.)

If the Storm isn’t a dynasty already, then they’re certainly one in the making.

On some level, this cementing of the Storm’s success is completely expected. The team topped power rankings this year, thanks in large part to a deep bench that can hold its own against a wide swath of other clubs’ starting lineups. This year, in particular, felt like a safe bet because other WNBA superstars, like Liz Cambage and Elena Delle Donne, sat out the season for medical reasons. Many fans of the league — myself included — were certain that the Storm would clinch it again this year. (Some of us even wrote articles predicting that outcome all the way back in August, risking the humiliation that can come with overconfidence.)

But the Storm’s continuing dominance also threatens to cover over all the challenges they’ve faced while building this legacy. It’s easy to forget, when Breanna Stewart is scoring 37 points in one game, that she spent all of last season recovering from a torn Achilles. When you watch Bird move her team around the court with all the strategic genius of a chess grandmaster, it escapes your mind that she sat out the 2019 season after undergoing knee surgery — and that she’s only about a decade away from being eligible to join AARP. (Sorry, Sue, but it’s true. I did the math.) Not to mention that head coach Dan Hughes was fighting cancer last year and had to hand over his duties to right-hand man Gary Kloppenburg for much of last season and all of the 2020 season.

It’s the sort of bad medical luck that can make you wonder whether a team’s entire year can be cursed. And yet the Storm still managed to make the second round of playoffs last year.

On top of those more concrete challenges, the Storm also face a more spiritual one: The team hasn’t had a single arena to call home for two years. First, in 2019, the venue formerly known as KeyArena went under construction, forcing the Storm to split their time between the University of Washington and Angel of the Winds Arena in Everett for a season. Then this year, COVID-19 forced the entire WNBA to play this year’s season in a “wubble” in Bradenton, Florida, where the only way to simulate home-court advantage is with in-arena music. (It was the pandemic that prompted Hughes not to serve as head coach this season because his health history places him in a high-risk group for severe illness, if he were to contract the coronavirus. Hughes, fortunately, was able to celebrate with the team on a giant videoconferencing screen after the big win.)

Most other Seattle professional sports teams have the luxury of a court or a patch of grass they can call their own. When Seattleites march through Pioneer Square to Sounders matches, there’s a feeling of homecoming in the air that Storm games haven’t had since a masked Sue Bird saved the team from a semifinals loss in 2018. Bird, playing with a broken nose, sank multiple game-clinching three-pointers. The resulting cheering in KeyArena was almost loud enough to blow the roof off the building ahead of schedule. (I had just moved to Seattle by that point, and didn’t realize just how ear-shattering this city of quiet introverts could be when we’re watching sports.) That night, ESPN’s Ryan Ruocco famously declared KeyArena to be “Sue Bird’s building,” but neither the Storm nor its longstanding superstar has had a dedicated building to play in ever since that season wrapped.

Even though these unfortunate circumstances are largely the result of bad luck and bad timing, it still doesn’t feel right that the Seattle professional sports team with the most national championships may have to wait until the middle of its next season, when Climate Pledge Arena is completed, to return to its permanent home. And that discrepancy is all the more palpable because the women of the Seattle Storm are such valuable contributors to this city. Alysha Clark hosts an annual toy drive for Seattle Children’s hospital. Jewell Loyd does basketball clinics for youth in our area. Bird has long been known for local her philanthropy. This year, too, the Seattle Storm were at the forefront of the movement for Black lives in pro sports, participating in rallies, making powerful on-court statements and devising savvy media strategies to make sure their message didn’t get lost as the season wore on.

From that perspective, the Storm’s fourth championship is anything but rote. This is a team that won a title in 2018, then got beset by multiple severe medical issues — some of the worst any team can face — but then immediately bounced back the very next season to win it all again. This is a team that’s been playing without a true home court in a city where still too few of us turn up to appreciate the excellence of the product they put out. This is a team that’s showing the world how to combine anti-racist activism with athletic performance during a global pandemic.

This is a team that deserves to come home.