Editor’s Notebook: The pink elephant in the room

Plus, spilling blood to get inside a Seattle music venue. 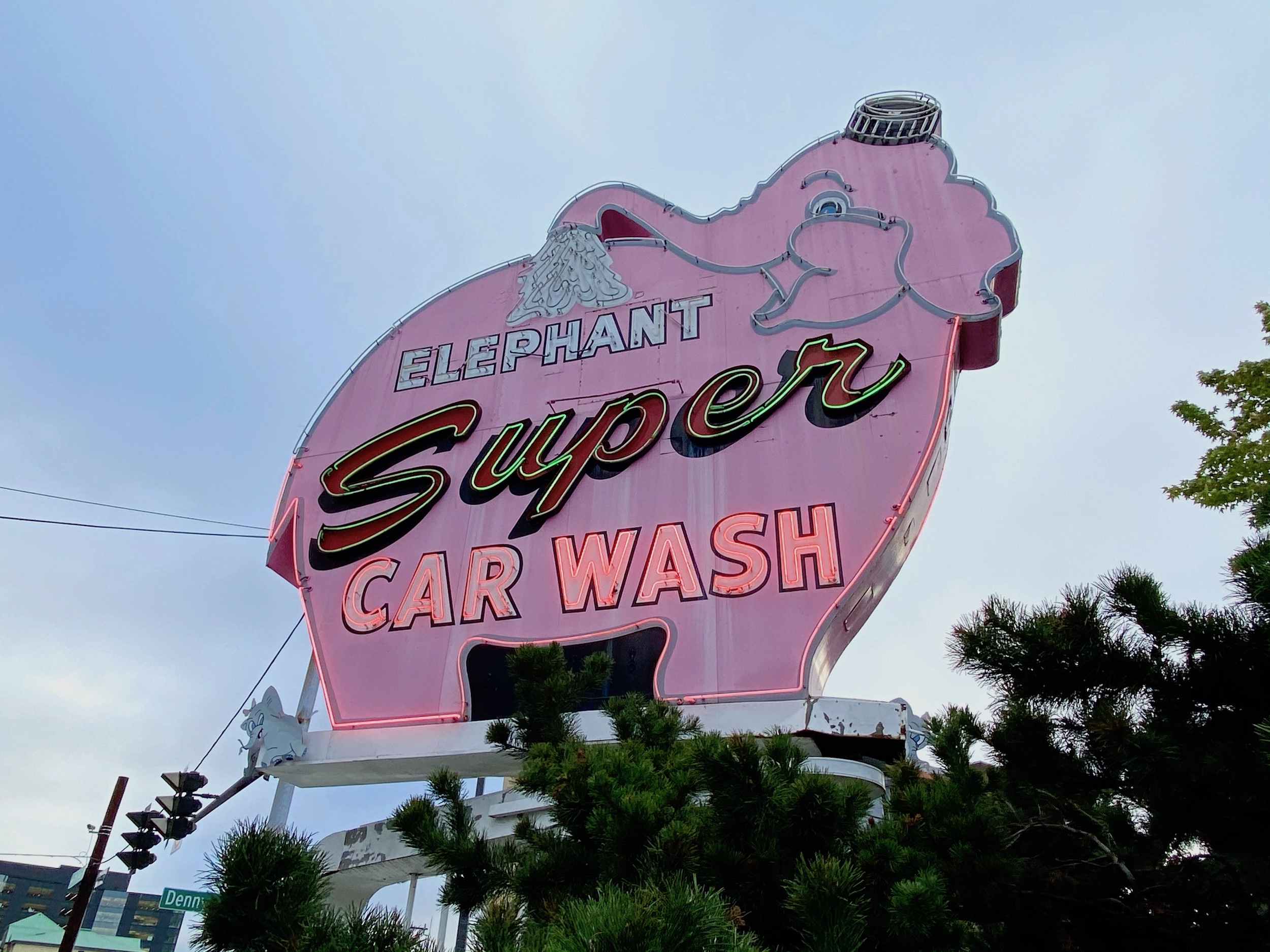 The iconic pink Elephant Car Wash sign is coming down. It will be donated to the Museum of History and Industry. (Daniel Spils)

The pink elephant is migrating. The playful pachyderm, whose rotating, neon-lit bulk was a beacon for countless commuters stuck in gridlock traffic on Denny Way, is being pushed out of its natural habitat: Elephant Car Wash.

The business has been boarded up for a while, and this week developers filed a demolition permit for the property, causing a wave of preservation panic amid locals. Today, Elephant Car Wash announced it will donate the sign to the Museum of History and Industry, a kind of zoo for rare and endangered cultural objects from the Northwest.

The iconic sign graced the intersection for 64 years, and has been the frequent star of B-roll shots for movies, commercials and TV shows set in Seattle. It also embodies the city’s reputation as incubator of both arts and technology.

Opened in 1951 by a trio of local brothers, Elephant Car Wash was the first fully automated (“touchfree”) car wash, incorporating nifty spray nozzles, automatic brushes and a 50-horsepower blow dryer. The Denny Triangle location (opened in 1956) was the second of several Elephant Car Wash outlets, one with a front-row seat to enormous downtown development.

Local artist Beatrice Haverfield designed the sign (and many other notable neon signs in Seattle, including Ivar’s and Dick’s Drive-In). With its circus fez, raised eyebrow and showering trunk, the creature is far more inviting than, say, the freaky pink elephants on parade in Disney’s Dumbo. Haverfield famously added four baby elephants underfoot as a tribute to her own offspring, several of whom became artists as well.

In the wild, matriarchal elephants can employ their renowned memory banks to lead herds across vast distances, over the course of years, to return to fertile watering holes. They have a superpower for recalling the details of their geographic environment. MOHAI is less than 2 miles from the pink elephant’s post — a cinch for any elephant on the move. But with the landscape almost entirely obliterated by skyscrapers, could it find its way back home?

In her new video for the song "Impossible Weight," Jessica Dobson of Seattle band Deep Sea Diver gets inside the empty Neptune Theater. (Tyler Kalberg)

In her new video for the song "Impossible Weight," Jessica Dobson of Seattle band Deep Sea Diver gets inside the empty Neptune Theater. (Tyler Kalberg)

As a 27-year resident of Seattle, I’ll admit I get sentimental about our disappearing cultural touchstones and landmarks. (To which the region’s Coast Salish inhabitants might rightly respond, “Cry me a river.”) But whether it’s something I once experienced daily (the Viaduct, purposefully demolished) or something I didn’t know existed until they were in danger of disappearing (the Mercer Arena gargoyles, accidentally demolished), I feel the loss. In the case of the former, I wrote a song about it.

As an artgoer, I miss the independent movie theaters that have gone away forever (Harvard Exit, Seven Gables, the Guild 45th), as well as the performance spaces we haven’t been able to get into for the past seven months.

In last week’s newsletter, I talked about new dance films from local company Whim W’Him. One of them, Manifold, is set in the empty Vashon Center for the Arts. To me, the sight of the angled audience seats and smudged stage floor felt like peering into an archaeological dig.

I’m not the only one yearning to get inside these familiar spaces. This week music writer and Crosscut contributor Charles Cross shares how he wanted to get into the Moore Theatre so badly he signed up to give blood during a pop-up donation drive. Rekindling his memories of seeing so many live shows inside those walls amplified his fears for the survival of Seattle’s live music industry, which is in dire straits since the pandemic closures.

Seattle rock band Deep Sea Diver pays tribute to independent music venues in its video for the song “Wishing,” off the new album Impossible Weight (landing Oct. 16). The video features clips of independent music-venue owners nationwide, standing (or dancing) outside their shuttered spaces. And in the video for the titular song “Impossible Weight,” lead singer Jessica Dobson wanders through empty Northwest spaces, including Seattle’s Neptune Theatre, the movie theater turned music venue. It’s a terrific song with a hint of ’80s magic, but I keep pausing the video to step inside the Neptune once again. 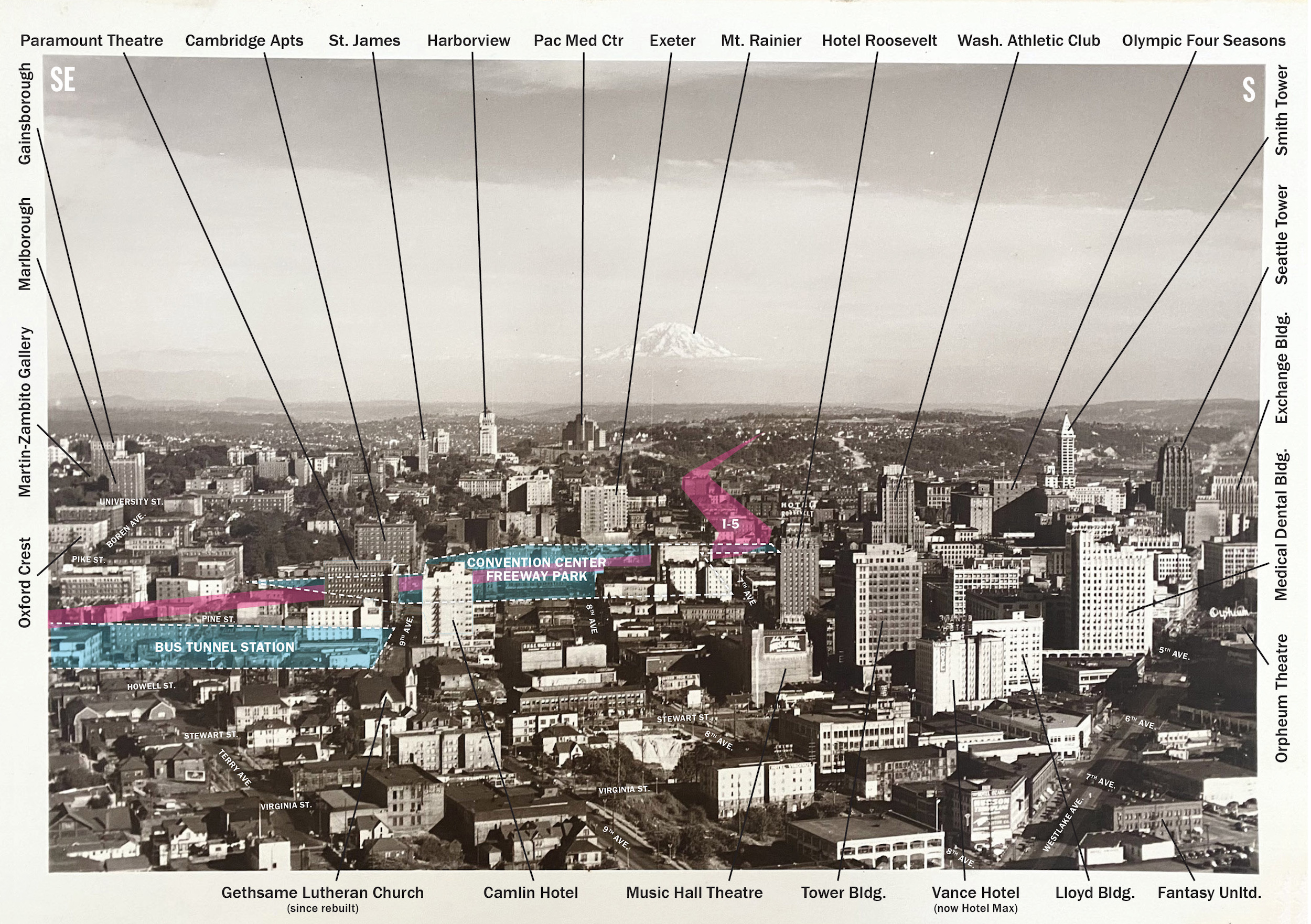 Human brains are three times smaller than those of elephants. How good are our geographic memory banks?

HistoryLink has long served as an online encyclopedia of Seattle past, and this week the organization launched a series of free downloadable walking tours for an array of Seattle neighborhoods (plus Issaquah and Kenmore). Each point on the map includes current photos of the location, historic photos and a wealth of fascinating facts. Take “Free Speech Corner” in Pioneer Square, where early 1900s activists met to protest. It was a favorite spot of Scotland-born workers’ rights advocate Kate Sadler, “Seattle’s best-loved radical orator.”

Or the still-standing building with the cool, recessed balcony at Second Avenue and South Washington Street — it once housed the Wa Chong Company Store, opened in 1868 by Seattle’s first Chinese settler. Or the area known in the 1950s as a “carnival for the queer community.” Or Sdzidzilalitch (Little Crossing-Over Place), a winter village for Coast Salish tribes at what's now the Puget Sound end of Yesler Way. Each tour peels back the layers of Seattle stories like yellowed wallpaper.

Last weekend my husband, Daniel, came back from a walk carrying a sepia tone aerial photograph of Seattle. He had grabbed it from a free pile outside an old house. It was hard to tell exactly when the photo was taken, though the downtown it shows is startlingly smaller — and there’s no Interstate 5 snaking through.

He posted it on Facebook and old-school Seattleites immediately jumped in to help identify the year based on the buildings. You can see the grand old Orpheum Theatre, built in 1927 and torn down in 1967. It first hosted vaudeville shows, then the Seattle Symphony and later became a movie theater. Also visible is the Music Hall (1929-1992), which started out as movie house specifically for talking pictures.

Dan Paulus, a friend and former art director of City Arts magazine, took it upon himself to map the buildings in the photo. And suddenly a free-pile find became a glimpse at the ghosts of history.

With Seattle changing so quickly, how can we keep a mental map of the landscape that’s come and gone? Pool our knowledge on social media, visit museums, take historic tours. When we emerge from the pandemic and search for the Seattle we knew, will we find our way back like elephants? 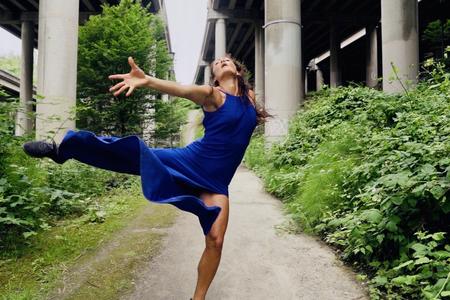 Editor’s Notebook: Bruce Lee and the art of flow

Plus: Dancing the debate away.

Editor’s Notebook: Bruce Lee and the art of flow

Plus: Dancing the debate away.