How tech helped in the fight against the 1918 flu

Radios, telephones and dishwashers influenced our response to the nation's last great epidemic.

1918 radio trainee cadets of the U.S. Navy at the University of Washington. Some of the men shown here fell victim to the influenza pandemic that swept through Seattle and the rest of the country between 1918 and 1920. The wireless technology they were trained to use at UW aided the fight against the epidemic. (MOHAI)

The Spanish influenza pandemic of 1918-1920 disrupted life around the world. And while it generated fear as death rates soared, new technologies and applications played a role in helping people cope with the spread of the disease, including here on the West Coast and the Pacific Rim.

Wireless ship-to-ship and ship-to-shore communications were already established, but they expanded rapidly during World War I. The Naval training station at the University of Washington trained cadets in many aspects of service — including a large class in radio communications. During wartime, the Navy was expanding the use of radio throughout its fleet.

The UW training station, however, was one of the first locations in Seattle to see cases of Spanish influenza, which was spreading rapidly in military and naval camps, including Camp Lewis and the Bremerton Shipyard. A number of UW-based cadets died. Still, radio communications played an important role during the pandemic, spreading word of health conditions in remote locations, including among Indigenous communities.

The progress of the flu in Alaska was tracked by the Seattle press. Trade connections were still strong after the gold rush — Seattle considered itself the “gateway” to the far north. In October 1918, as the flu’s presence in the cities up and down the West Coast began shutting down as a result of the flu, the governor of Alaska cabled Seattle steamship companies and informed them that passengers suffering flu symptoms would not be allowed to land in the territory. He urged passengers to be examined for flu before departure. 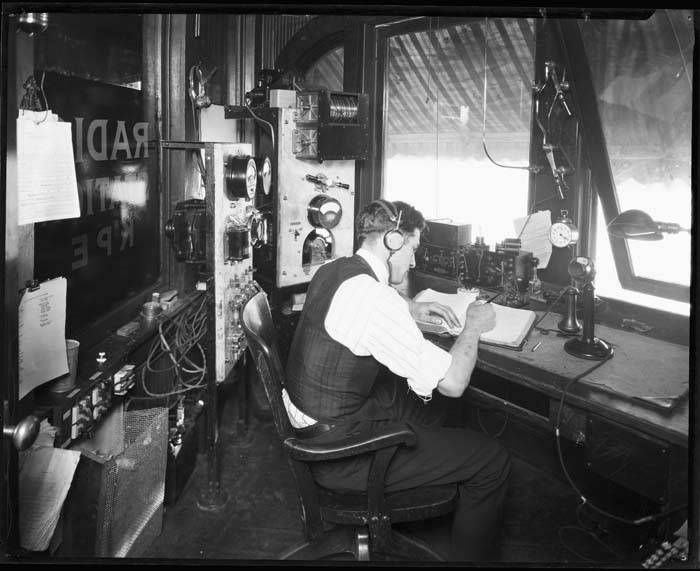 The Port of Seattle was very busy during the 1920s. The harbor radio station, KPE, messaged with ships leaving or entering the harbor, radioing their estimated arrival/leaving times and other messages. This helped the port control ship traffic. (Webster & Stevens/MOHAI)

The Port of Seattle was very busy during the 1920s. The harbor radio station, KPE, messaged with ships leaving or entering the harbor, radioing their estimated arrival/leaving times and other messages. This helped the port control ship traffic. (Webster & Stevens/MOHAI)

Unfortunately, it was not yet understood that this influenza could be spread by people who were asymptomatic. In November 1918, the disease appeared in the vicinity of Nome after a steamship from Seattle brought passengers to the small, northern Alaskan city. It swept through Nome and nearby native communities. The passengers, all screened multiple times by doctors for symptoms, had isolated upon arrival. Still, the flu had slipped through.

Under the headline, “Flu Ravages Alaska,” a Seattle Times article in May 1920 began, “Reports of the ravages of an influenza epidemic in towns and native settlements of interior Alaska continue to reach Seattle by mail and wireless telegraph.” The report noted outbreaks in the vicinity of Fairbanks, and that the region’s educational authorities had requested that physicians in Canada’s Yukon “use every precaution to prevent the disease from spreading farther north.” An outbreak on the Bering Sea coast was attributed to the arrival of cannery vessels — and “likely moved into the interior.” Wireless communication helped spread the warning in and beyond Alaska.

A dramatic example of radio communication spurring life-saving action occurred in the South Pacific and involved the tale of two Samoas. New Zealand occupied Western Samoa (now known as Samoa), having taken it from the Germans in 1914. Four years later, a cargo and passenger ship, the SS Talune, docked and landed passengers suffering from Spanish flu. In short order, 90% of the local population was infected and more than 20% — 8,000 to 9,000 — died, a catastrophic mortality rate. The ship also caused serious outbreaks with devastating effects on other islands, including Fiji and Tonga.

Hearing about the arrival of the influenza in Western Samoa via shortwave radio, the governor of nearby American Samoa, U.S. Navy Cmdr. John Martin Poyer, locked the island down with a strict quarantine. No ships were allowed in. Restrictions were enforced with the strong support of native chiefs. As a result, American Samoa suffered no deaths from Spanish influenza. The decision to cut off all access was made after news via radio of its neighbor’s crisis. In contrast to today’s pandemic response, New Zealand’s failure to protect Western Samoa in 1918 was widely criticized, while the U.S. response on its island territory was praised for averting disaster. Poyer received the Navy Cross for his actions.

A number of Northwest vessels plying the South Seas were caught up in flu-related quarantines as the disease hit remote islands. Foreign crews, passengers and locals loading and unloading cargo all spread influenza. The Seattle Times reported in January 1919 that many ships from Seattle were being held in South Seas ports, like Fiji, where “deaths are occurring so rapidly … that [bodies] are being burned in open bonfires.” Many of these vessels were part of the Puget Sound codfish fleet that worked off Alaska but traded copra (dried coconut) in the off-season. Among these was the Wawona, a historic and venerable Northwest sailing vessel, parts of which are now a sculpture at the Seattle Museum of History and Industry. The Times worried about the pandemic’s disruption of the cod fishing season, a major commercial enterprise.

At the local level, more mundane technological solutions to the flu were discussed. Newspaper articles touted newfangled electric dishwashers as tools for fighting influenza. The U.S. Surgeon General reported that rates of flu transmission were reduced by as much as two-thirds by machine washing of dishes and utensils over handwashing. For the most part these machines were used by institutions, such as the military or modern hotels.

The home telephone was becoming much more prevalent at the time too, and people were urged to use it for shopping in these pre-Amazon times. For example, Meier & Frank, the Portland department store, took out an ad in the Oregon Daily Journal urging customers to “Stamp Out the Spanish Influenza” and “Use the Telephone!” instead of coming into the store. The retailer touted its telephone capacity: “We have a very efficient telephone switch board … and six of the most capable exchange operators. There are 34 trunk lines to serve you and 297 house phones.” 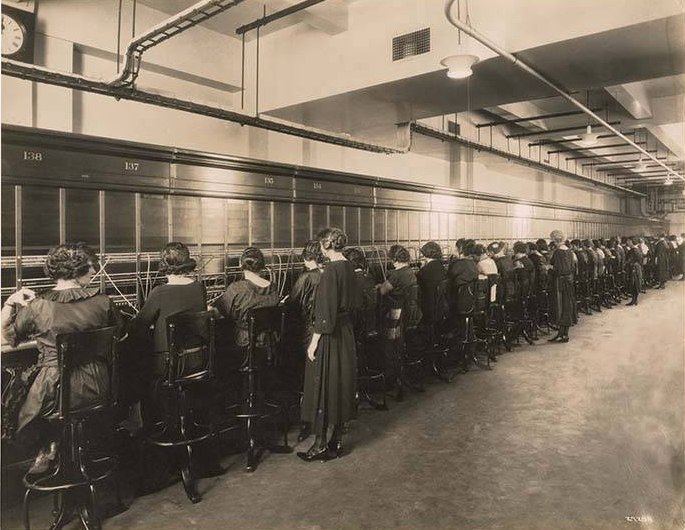 Telephone service in Seattle began with 90 customers in 1883. One of Seattle's original service providers, Sunset Telephone-Telegraph Company (later Pacific Telephone & Telegraph Company, then AT&T) built a new exchange building in 1921 to help handle what was by then 83,347 customers, making half-a-million local telephone calls every day. The Garfield Exchange was built on Queen Anne Hill at 1529 4th Avenue West and was used until the mid-1960s. (Frank H. Nowell/MOHAI)

Telephone service in Seattle began with 90 customers in 1883. One of Seattle's original service providers, Sunset Telephone-Telegraph Company (later Pacific Telephone & Telegraph Company, then AT&T) built a new exchange building in 1921 to help handle what was by then 83,347 customers, making half-a-million local telephone calls every day. The Garfield Exchange was built on Queen Anne Hill at 1529 4th Avenue West and was used until the mid-1960s. (Frank H. Nowell/MOHAI)

Before Zoom, the telephone also opened up new possibilities in education, including distance learning. In Los Angeles, during a second pandemic closure of public schools in December 1918, the school district prepared so that its 87,000 students could study at home. The TLA Evening Express reported that a special curriculum was developed: “A part of the instruction will be over the telephone, and where practicable the teacher will call on the student at his or her home, or the student will call on the teacher.” Some 9,000 teachers would track progress, though it was noted that the students would be on the honor system until in-person classes resumed.

Telephone service was vulnerable to the flu — or at least its human operators were, especially the “girls,” as women were called then, who worked at phone exchanges. A story in Corvallis, Oregon, complained that local service was “bum” because the “Spanish influenza … sent four of [the] best girls to … sneezing….” In Ontario, California, phone operators were inoculated with a preventive flu serum. The Los Angeles Times reported that all who got the serum were healthy, but that all but one “who refused the serum are today suffering with the influenza, eight cases in all.” Such serums were not all reliable, however. Still, only people in important jobs generally received them, so inoculating operators is an indication of how critical the phone system was.

Demand was also an issue. In Spokane, the Home Telegraph and Telephone Company announced, “As a result of war conditions and the present epidemic of influenza,” patrons needed to refrain from using the phone because of an “abnormal increase in local telephone traffic.”

Spokane wasn’t alone. At election time, in November 1918, the Sacramento Bee newspaper pleaded with readers not to call in for election results, so as not to jam phone lines. The local phone company was down 50 to 60 operators and couldn’t handle increased volumes due to the election. “Don’t use the telephone at any time during the influenza epidemic except when absolutely necessary," The Bee reported. "Your use of the phone may delay the call to a doctor from a nurse or relative of a dying person.” Instead, the paper encouraged readers to come down in person to the Bee's office and stand outside to get the returns via old-fashioned tech: “stereopticon, window bulletins and megaphone.”

Despite the drawbacks of vulnerable personnel, enthusiasm for the telephone and its future was great. Wireless telephony was touted as just around the corner. Godfrey Isaacs of the Marconi Wireless Telegraph Company said early 1919: “One day in the not too distant future we shall walk about with wireless telephones attached to our bodies and we shall be able … to call up a friend who is flying somewhere.” World War I had advanced wireless communication, and it would soon connect the entire globe, he predicted. Thus, the mobile phone was dreamed of in pandemic times.

A century later, we have them in our pockets. They haven’t prevented another pandemic, but they are helping to keep us informed — and misinformed — while we deal with it.

Seattle’s ‘Titanic’ spoof has songs and satire on deck