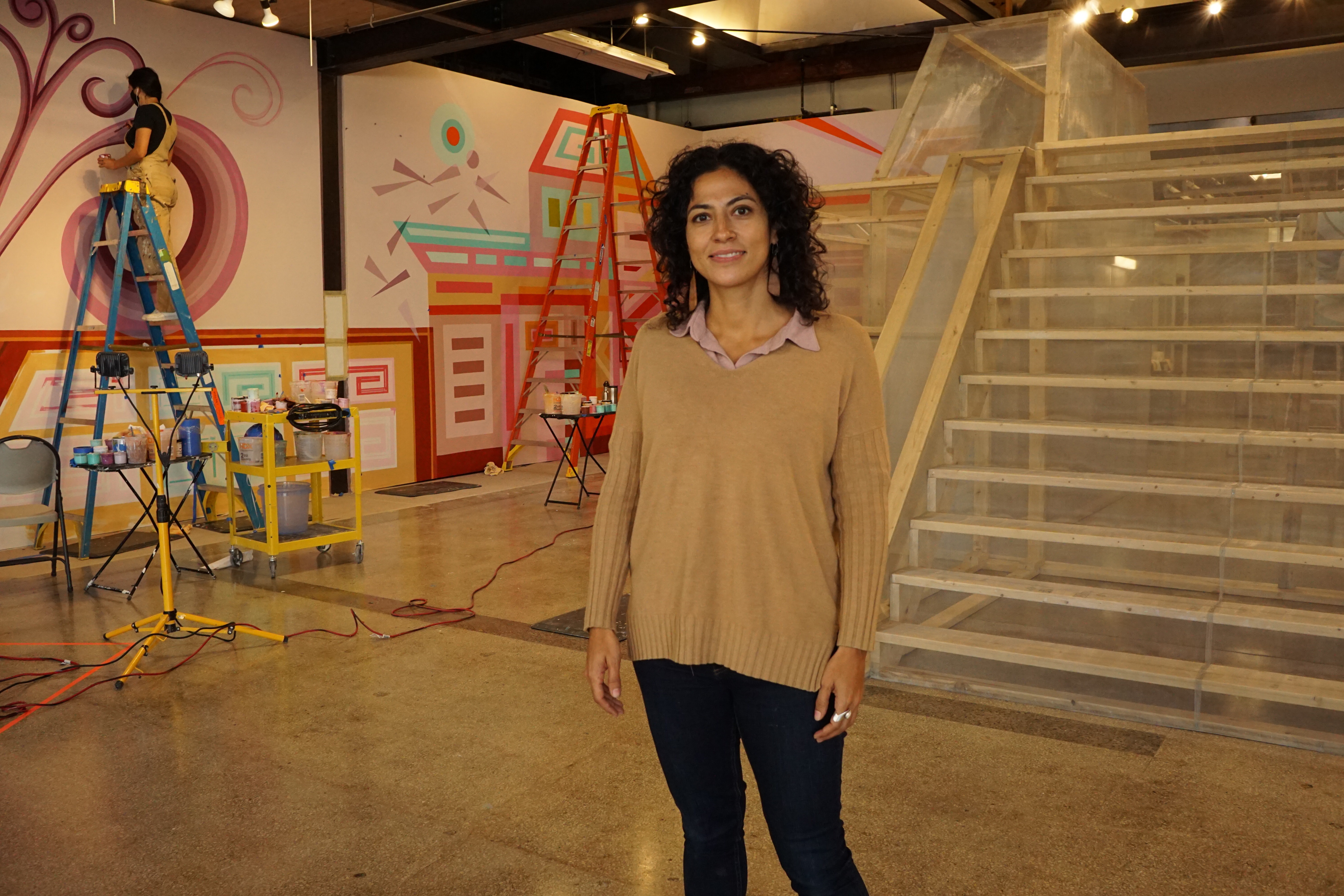 Marela Zacarías bids goodbye to Seattle with her MadArt show ‘Inside Out.’ (Agueda Pacheco Flores/Crosscut)

As a child growing up in Mexico, Marela Zacarías was surrounded by Indigenous art and culture. She would often tag along to archaeological sites with her mother, an anthropologist whose work involved identifying the sex and cause of death for ancient skeletons. Zacarías spent whole summers on excavation trips along the Yucatán Peninsula, where her mother unearthed the bones of people who lived in the Mesoamerican era.

Zacarías credits that cultural exposure as the original influence on her art, which includes murals painted all over the U.S. and Mexico. She recalls her first creative piece of work: a hand-painted codice, or codex (a document that predates books). The Aztecs used these ancient scripts to explain the origin stories of gods, but the 11-year-old Zacarías painted her own symbolic myths.

“My mom and aunt are twins, so I created this story about an eclipse,” she recalls. Her codice explained how the sisters became doubled.

For the past two years, the 41-year-old artist has spent a lot of time in Seattle, working on a sculpture commissioned by the Seattle-Tacoma International Airport. The piece, which consists of five interlocking 50-by-6-foot-long pieces that resemble thick, crumpled blankets, required a team of 13 artists to build. Zacarías and her helpers achieved the look of her signature sculptures by shaping wire mesh into oblong clouds and covering them in plaster. The result looks like stretched dough, or rumpled sheets. Once dry, she paints squares of different sizes onto the curves and edges.

At Sea-Tac, Zacarías was inspired to paint the puffs with swaths of natural colors she saw around Puget Sound, in bodies of water and wilderness. The finished piece will hang from the ceiling to welcome travelers from other countries, but won’t be viewable until the new International Arrivals Facility is completed (current projections say summer 2021).

But Seattleites don’t have to wait quite so long to see her work. This weekend, Zacarías opens a new show at South Lake Union’s MadArt. The exhibit, Inside Out (Oct. 15 - Dec. 12), will be a goodbye to Seattle, after which she’ll return to splitting her time between Brooklyn and Mexico City. 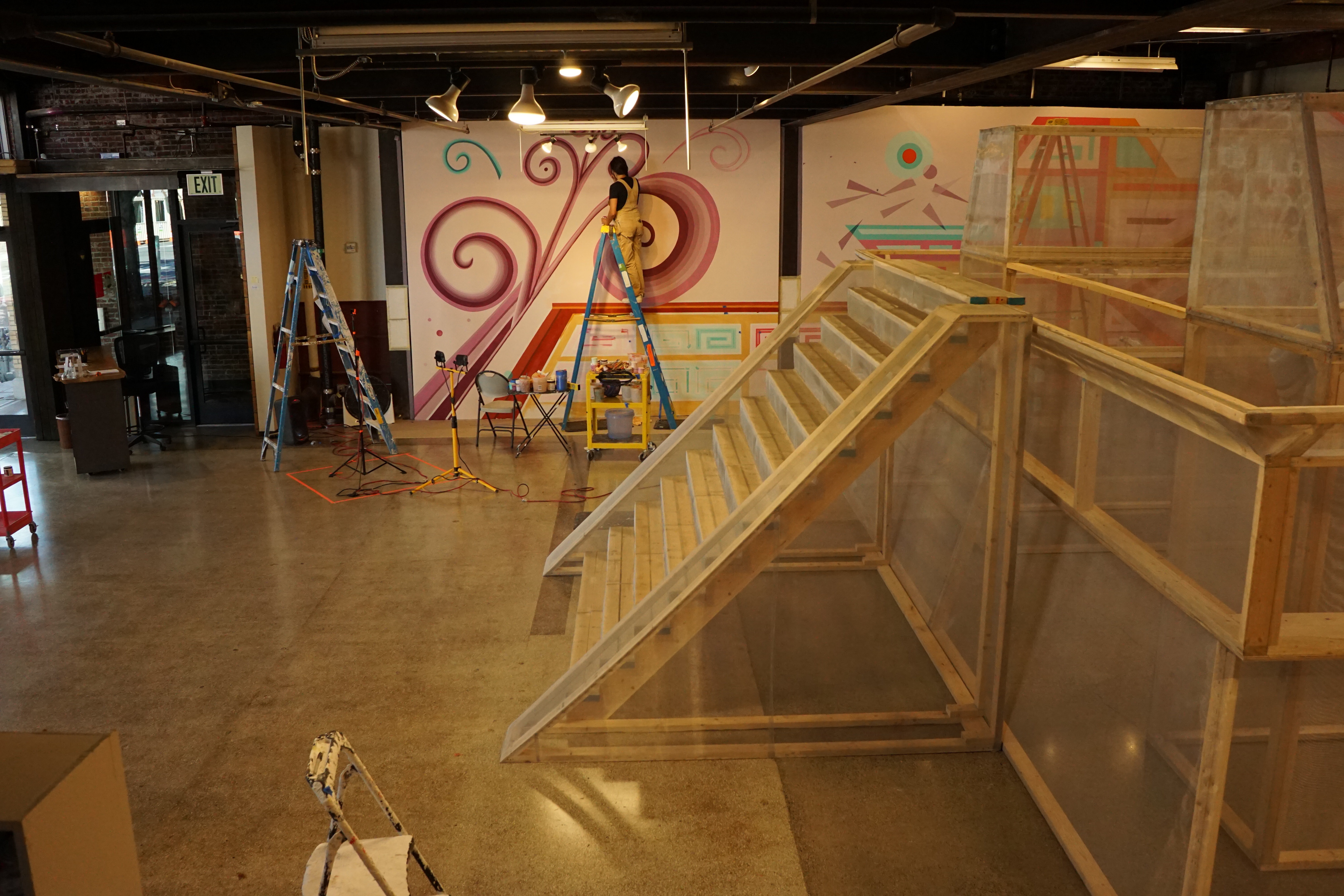 The wire mesh pyramid (a replica of the Temple of the Feathered Serpent in Xochicalco) stands 12 feet high and at its widest is 22 feet by 25 feet. (Agueda Pacheco Flores/Crosscut.)

The wire mesh pyramid (a replica of the Temple of the Feathered Serpent in Xochicalco) stands 12 feet high and at its widest is 22 feet by 25 feet. (Agueda Pacheco Flores/Crosscut.)

While her Sea-Tac piece was inspired by the Pacific Northwest palette, for Inside Out, Zacarías turned her mind to Mexico, where more than 180 archaeological sites are scattered across the country. Making use of the wide open MadArt space, she has re-created the Temple of the Feathered Serpent, a pyramid at the Xochicalco archaeological site in the state of Morelos.

An hour’s drive from her family home, Xochicalco (a UNESCO World Heritage site) is thought to be one of the only places where Aztec and Mayan shamans and leaders came together, perhaps to study the stars and determine the calendar. Aesthetic elements found on the site reflect art from both cultures, suggesting the two empires built the temple together before their eventual collapse.

For Zacarías, Xochicalco has been a constant in her life, a place she has ventured to many times with family and friends. At MadArt, the temple takes shape as a pyramid (25 feet wide by 12 feet high) made from wire mesh and wood beams. (The title Inside Out is a nod to the fact that the wire mesh she usually employs for the internal structure of her sculptures is now on the outside of the largest element of her installation.) The see-through structure comes off as fragile when compared with the rock pyramid of real life.

At the core of the mesh temple hangs a component piece Zacarías had shipped in from her Brooklyn studio. The fluid plaster sculpture wraps around a barely visible tire, a nod to Detroit, the city where the piece was originally unveiled. Named “Cihuacóatl,” after the Aztec goddess of fertility, it looks like a psychedelic coiled cobra covered in a tangle of colored squares.

For local artist Forrest Kahlil Perrine, who helped Zacarías construct Inside Out and who has visited her hometown and Xochicalco, “Cihaucoatl” brings the whole installation to life. 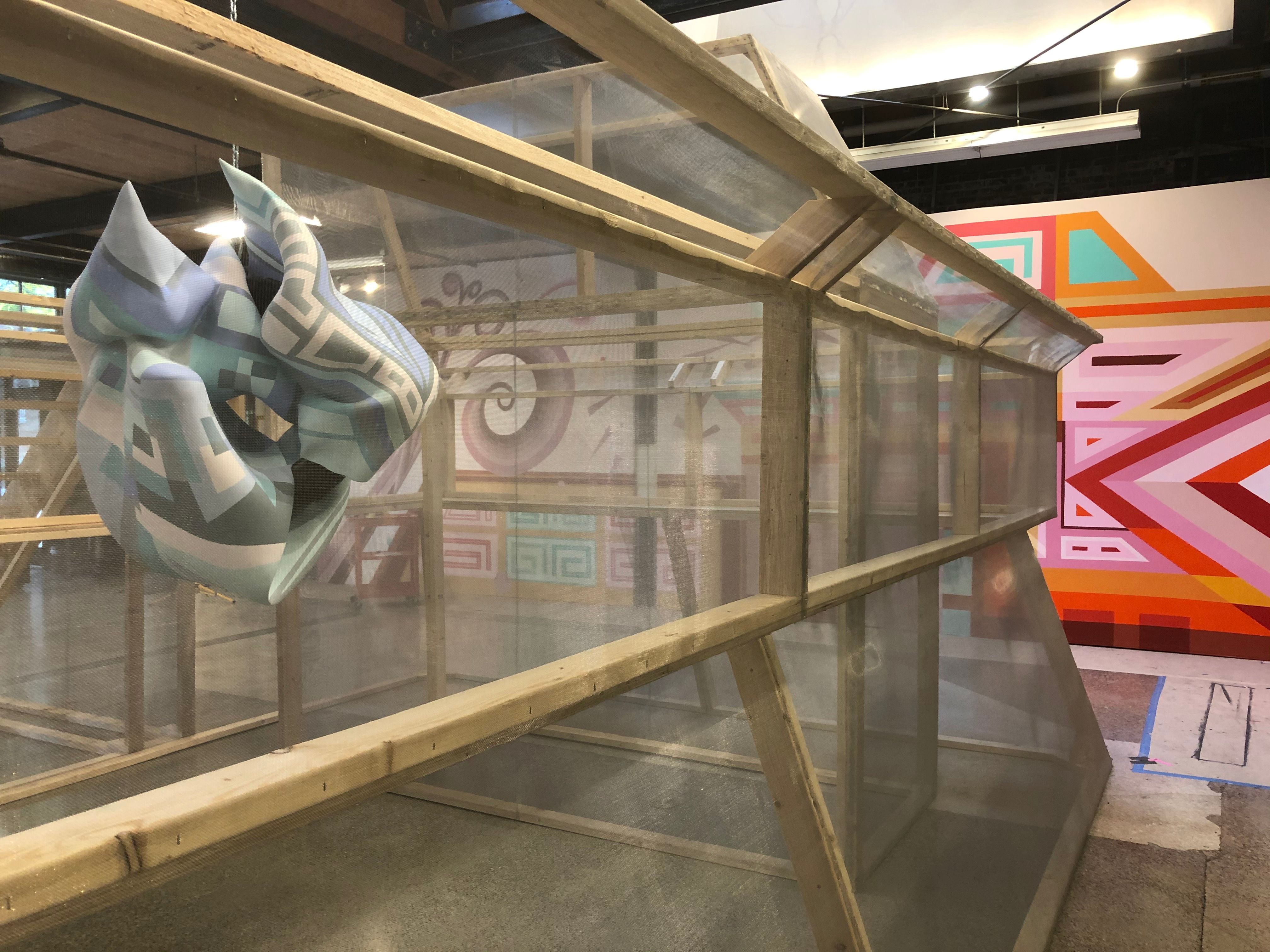 The snake-like composite piece at the center of the temple is titled 'Cihuacóatl,' in honor of the Aztec goddess of fertility. (Marela Zacarías)

The snake-like composite piece at the center of the temple is titled 'Cihuacóatl,' in honor of the Aztec goddess of fertility. (Marela Zacarías)

“Seeing it float there makes it feel like the heart in this giant wood and wire rib cage,” he says, “which lends it a pulse that draws on the feeling of being in the ancient archaeological site.”

In the Nahua language, Xochicalco means “in the house of flowers.” Thanks to Zacarías’s trademark geometry painted on the walls — in avocado greens and sunset purples and oranges — standing inside MadArt feels like being surrounded by summer flora. The lines of the murals echo the rectilinear shape of the temple, while vibrating with vivid life seemingly sustained by the centerpiece.

Unlike the actual Temple of the Feathered Serpent, which is an homage to Quetzalcoatl, a Jesus-like god in Aztec mythology, Zacarías’s pyramid pays tribute to the god’s feminine counterpart, Cihuacóatl.

“I wanted to dedicate my temple to the resilience inherent in being a woman, the creative power, but also how we're warriors with this energy that helps us,” she says. “Not only childbirth, but I think of the women who are separated from their children at the border, of women who are going through a war, women who are single moms and finding food for their kids,” she says, looking at the pyramid from across the room. “I mean there's just so much resilience that is called from us.”

Xochicalco took on new meaning for Zacarías earlier this year. She was living in Cuernavaca, close to Xochicalco, when the coronavirus outbreak ballooned in the U.S. Considering her options — return to Seattle or New York City, at the time both COVID-19 epicenters — Zacarías instead chose to stay in Mexico with her son, parents and siblings.

“It was a regenerative time for me,” she says. “I had gotten there really exhausted from 2½ years of making the pieces for the Port, so [the longer stay] was unexpected, but welcomed.” 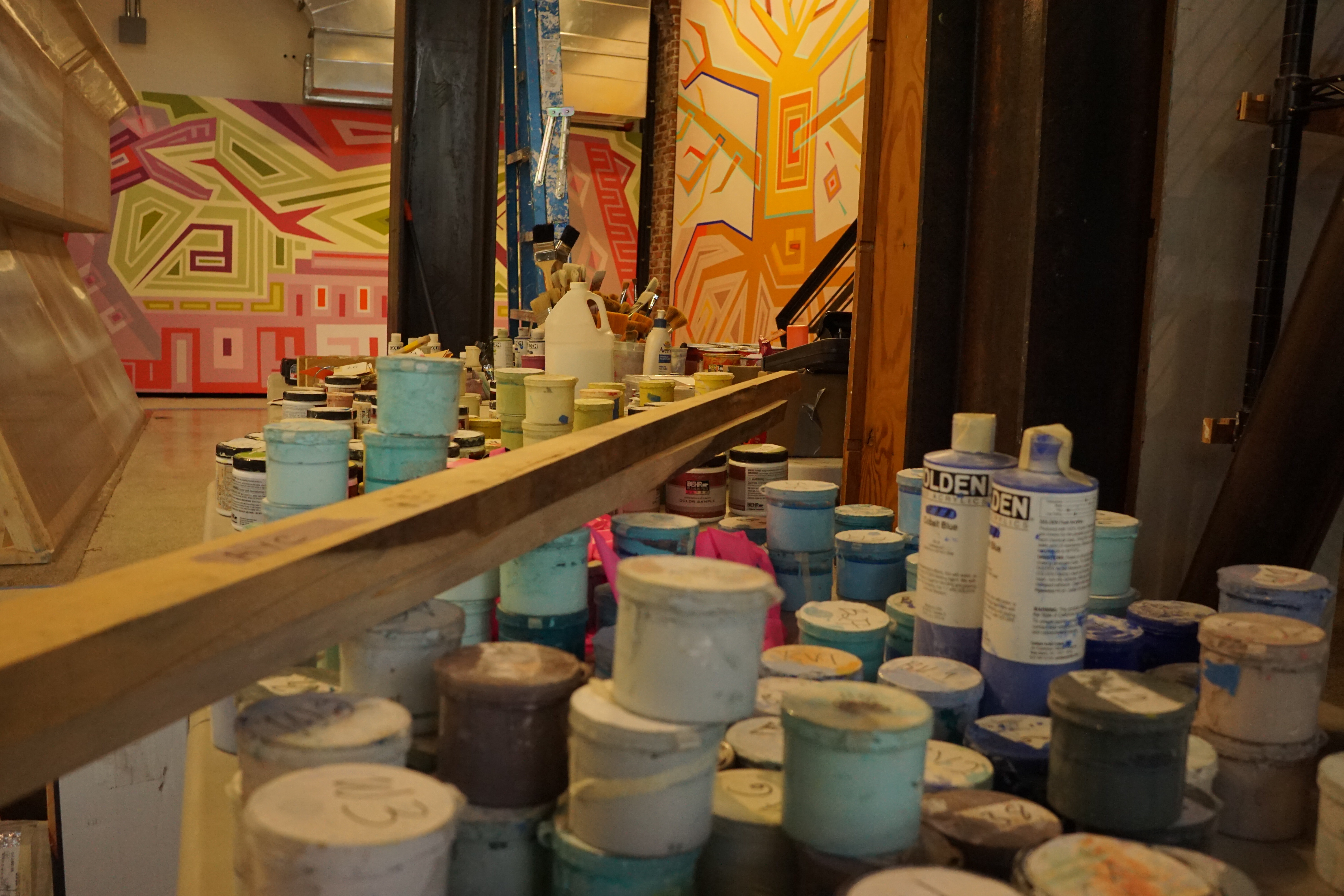 Standing inside the MadArt installation feels like being surrounded by summer flora due to the bright oranges, blues, pinks and purples Zacarías painted in the murals. (Agueda Pacheco Flores/Crosscut)

Standing inside the MadArt installation feels like being surrounded by summer flora due to the bright oranges, blues, pinks and purples Zacarías painted in the murals. (Agueda Pacheco Flores/Crosscut)

For four months, Zacarías lived with her family (for the first time since she was 17), and watched as customary ways of life fell apart around the world. Just as the Mayan and Aztec societies collapsed, so too was she witnessing collapse in places like the U.S., where protests rocked the country.

The unplanned “residency” in Mexico granted Zacarías space and time to think. She thought about her life, the meaning of Xochicalco, her work as an artist and activist, the Black Lives Matter movement and the impact of the pandemic. At the same time, she was thinking about her upcoming exhibit at MadArt. That’s when she realized what she wanted to create for this moment.

“As I'm thinking about the project and everything, it kind of arrives as a symbol — I just saw it,” she recalls. “I saw the pyramid and I saw my sculpture hanging in the middle of it and I thought how this is a symbol of rebuilding a structure after the empire collapses, after things are kind of crumbling, and building something new.”

Inside Out is on view Oct. 16 - Dec. 12, at MadArt in South Lake Union. The gallery is open Thursday through Saturday from noon to 4 p.m. and by appointment. The show is also visible through the large glass windows on Westlake Avenue North. To hear Zacarías talk about the making of the work, watch her video chats on the MadArt Instagram page. 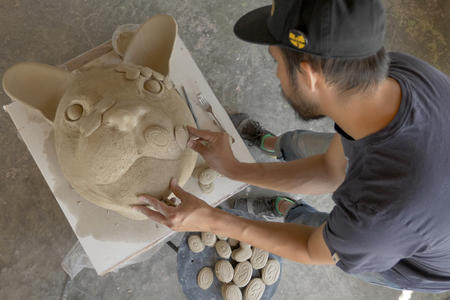 by / August 2
Article continues below