Instead of Netflix, tune into the Seattle Queer Film Festival, the National Film Festival for Talented Youth and ‘Doctober.’ 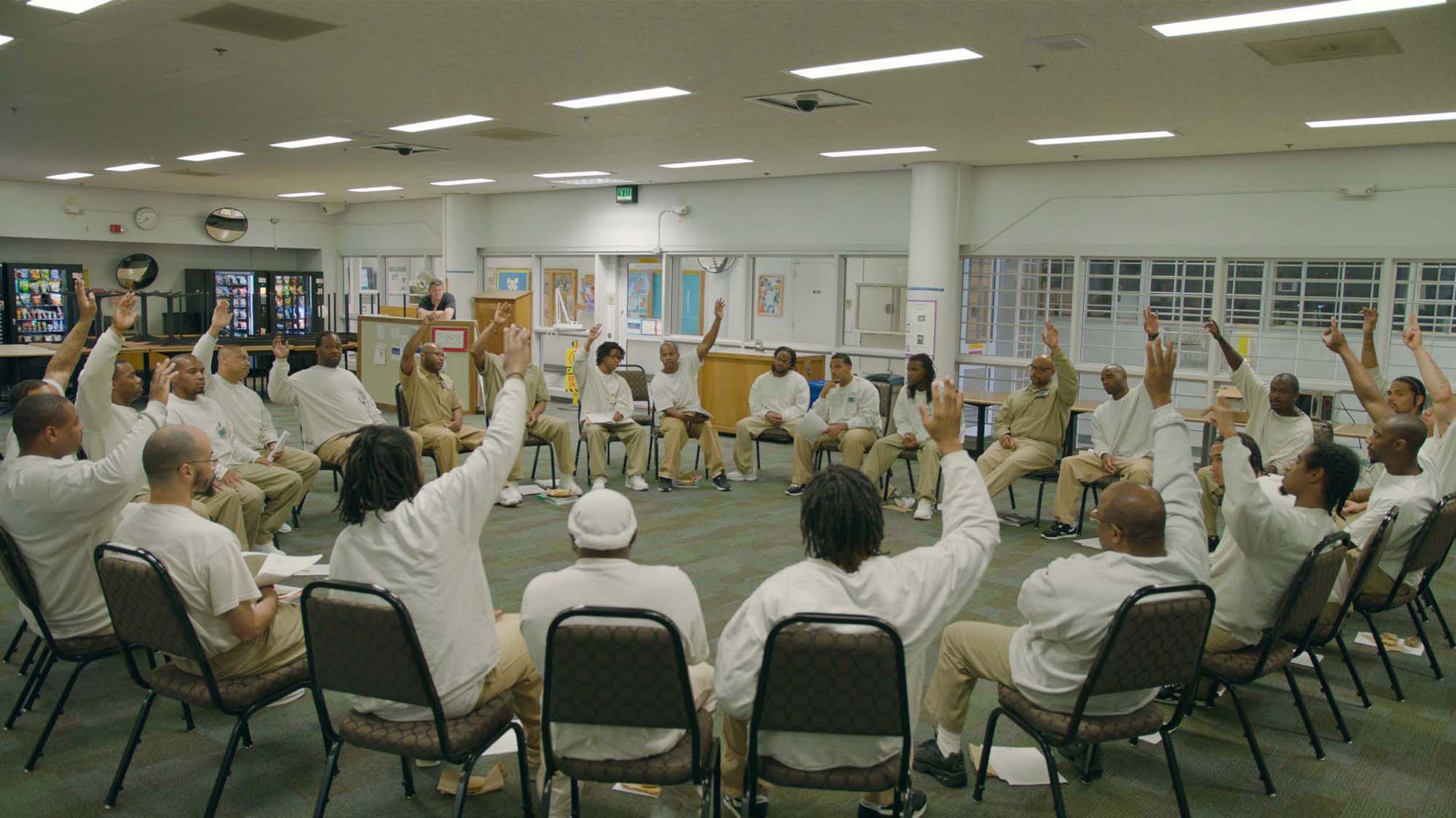 ‘Since I Been Down,’ a documentary about the carceral system by local director Gilda Sheppard, zooms in on a group of incarcerated people creating pathways for education and healing within the prison walls. (Since I Been Down/Prison Education LLC)

There’s nothing like going to the movies — the hushed murmur in the lobby, the dimming of the lights, the savory smell of popcorn and the few hours of singularly focused attention. Though Gov. Jay Inslee recently eased pandemic restrictions on movie theaters, some of which can now open at 25% or 50% capacity, many are still a long way from anything resembling “normal” (not to mention that audiences may still feel squeamish about returning).

For the near future, cinephiles will need to shelve dreams of mingling in the lobby at a buzzy film festival. But watching a screening in comfy sweatpants has its own benefits. And this month brings a slew of streaming film festivals that feature notable documentaries, features and shorts made in or about the region. Whether the focus is Latinx, queer or youth-made movies, these fests offer indie viewing you won’t find on Netflix. As temperatures drop and fall settles in, consider hunkering down with this slate of local films.

“Let’s go to the street and look to see what we can find,” says Pedro Moreno in La Vida de un Latero (The Life of a “Canner”), a short documentary screening at the Seattle Latino Film Festival (through Oct. 17; free online). The touching doc by journalist Madeline Gunderson, originally from the Pacific Northwest, follows Moreno and his wife, Josefa Marin, who make a living collecting and recycling New York’s emptied bottles and cans. The film also zooms in on Sure We Can, the couple’s beloved bottle redemption facility, which is facing eviction, but it is the duo's globe-spanning love story that ends up stealing the show. 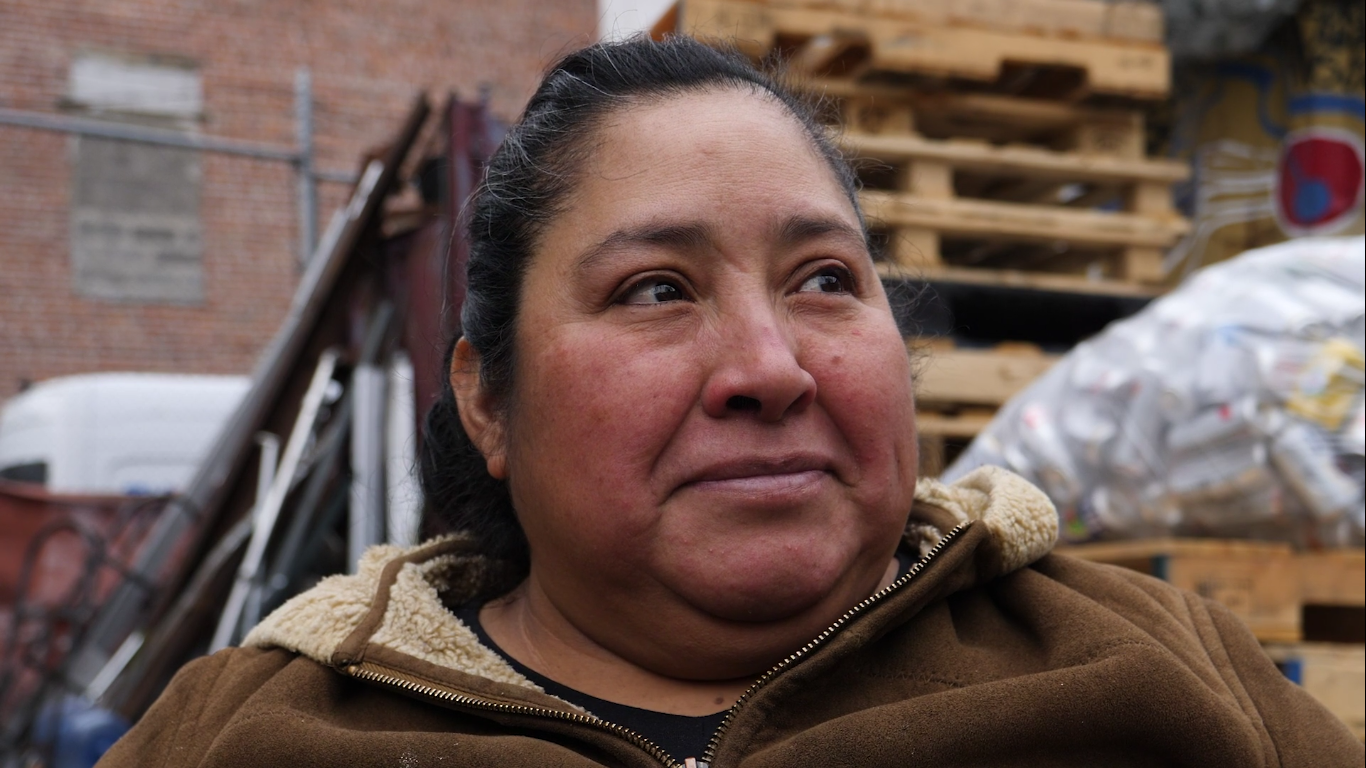 Josefa Marin is one of the main characters in the short, touching doc ‘La Vida de un Latero’ (‘The Life of a "Canner"’), screening at the Seattle Latino Film Festival. (Madeline Gunderson)

Josefa Marin is one of the main characters in the short, touching doc ‘La Vida de un Latero’ (‘The Life of a "Canner"’), screening at the Seattle Latino Film Festival. (Madeline Gunderson)

More Latino Film Festival recs: It’s hard to choose from the festival’s more than 90 films from over 20 countries, but notable is the mysterious feature Window Boy Would Also Like to Have a Submarine (already getting critical praise), as well as documentaries about female graffiti artists, a young Indigenous artist from hidalguense Huasteca in Mexico and the first transgender woman in the Brazilian Armed Forces.

Seattle Latino Film Festival runs through Oct. 17. Films can be streamed from anywhere in the U.S. A festival pass costs $25, individual tickets start at $2, though various programs and films are free.

“Cruel twist of fate” doesn’t even begin to describe what was asked of Col. Patsy Thompson in 1992. That’s when Thompson presided over a military hearing to discharge Col. Margarethe Cammermeyer, a highly decorated chief nurse from Washington state, who had admitted to being gay — at the time considered "incompatible with military service.” No one knew that Thompson was a lesbian herself, still closeted at that point. Surviving the Silence, a new documentary screening at the Seattle Queer Film Festival, traces the painful history of the military’s anti-gay policies — and the fight to undo them — through conversations with Thompson and her longtime partner, now-wife Barbara Brass, and Cammermeyer, who lives on Whidbey island.

More Seattle Queer Film Festival recs: Take it from a millennial: The Millennial Experience, by local director/choreographer Alex Crozier, is indeed an ... experience. Several Seattle cultural luminaries, including nonmillennials like choreographer Donald Byrd, make an appearance, along with Northwest sunsets and now-closed venues in this strange blend of dance film, documentary and reenactment. Other films worth streaming with a festival pass: opening night rom-com Breaking Fast, the friendship film Gossamer Folds and a documentary about the best-selling lesbian magazine Curve.

Seattle Queer Film Festival runs Oct. 15 - 25. Tickets start at $5, passes at $65. You can watch from anywhere in Washington, Oregon and Idaho.

Find these and other screenings for The Paper Tigers on the film’s website. 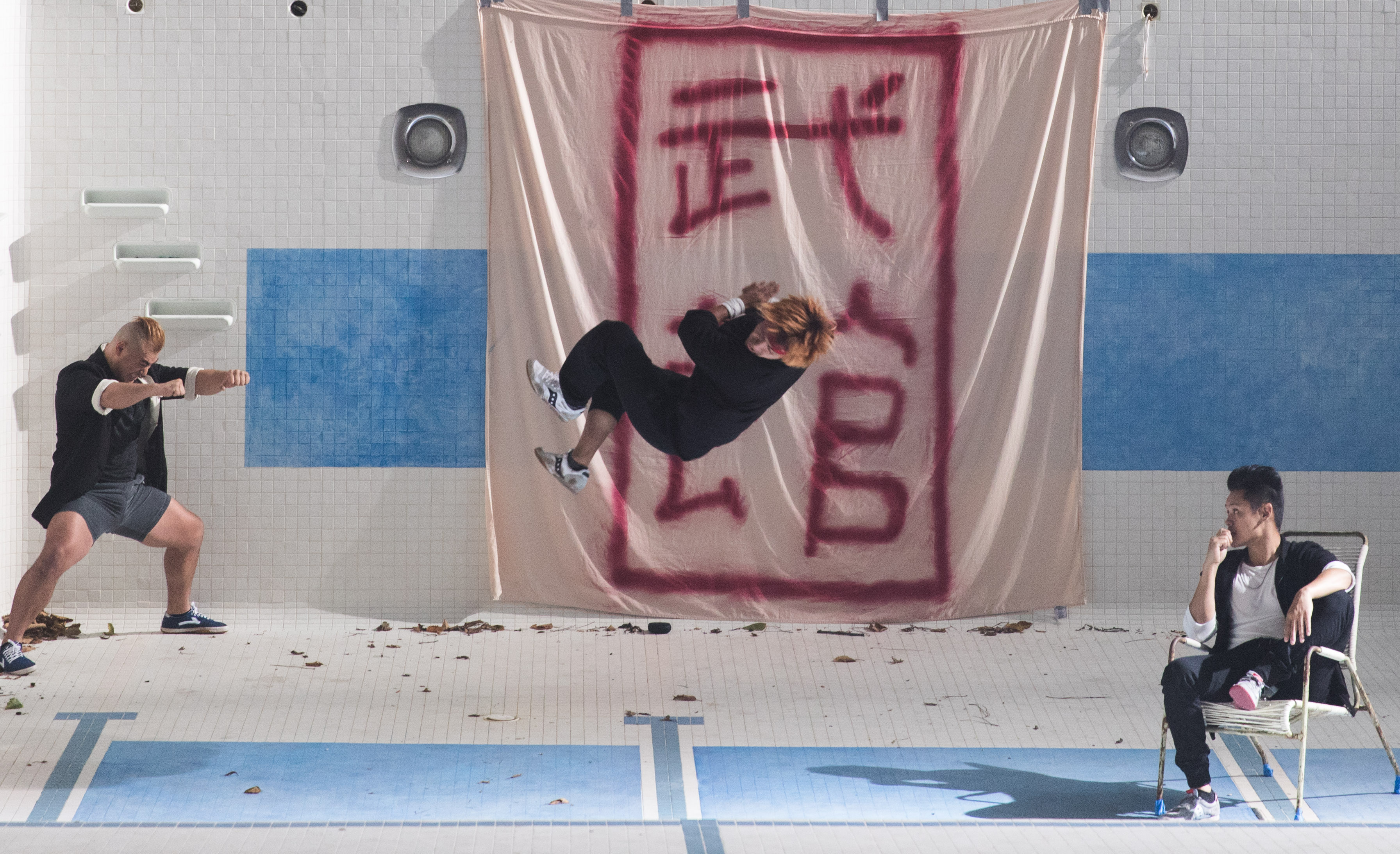 The cast of the locally made kung fu comedy ‘The Paper Tigers’ films a scene inside the pool at Hamline Park in Shoreline, Aug. 22, 2019. (Photo by Matt M. McKnight/Crosscut)

The cast of the locally made kung fu comedy ‘The Paper Tigers’ films a scene inside the pool at Hamline Park in Shoreline, Aug. 22, 2019. (Photo by Matt M. McKnight/Crosscut)

The kids are not just all right — they’re artists. Take as evidence the short films in “Pacific Northbest,” a collection of movies made by local youth screening at the Seattle-based National Film Festival for Talented Youth. Among the best of the mix: a mumble-core-inspired, meandering teen drama with a surprising plot twist (Everything Bagel), a mature and slightly surreal take on the culture of self-improvement (Superbody), an entertaining parable about a pesty parakeet (No Fan of Andy) and a beautiful portrait of a friendship between two high school boys (The Days Are Just Packed). Also don’t miss the ambitious local indie fantasy flick Headless Into the Night by Seattle director Nifemi Madarikan. 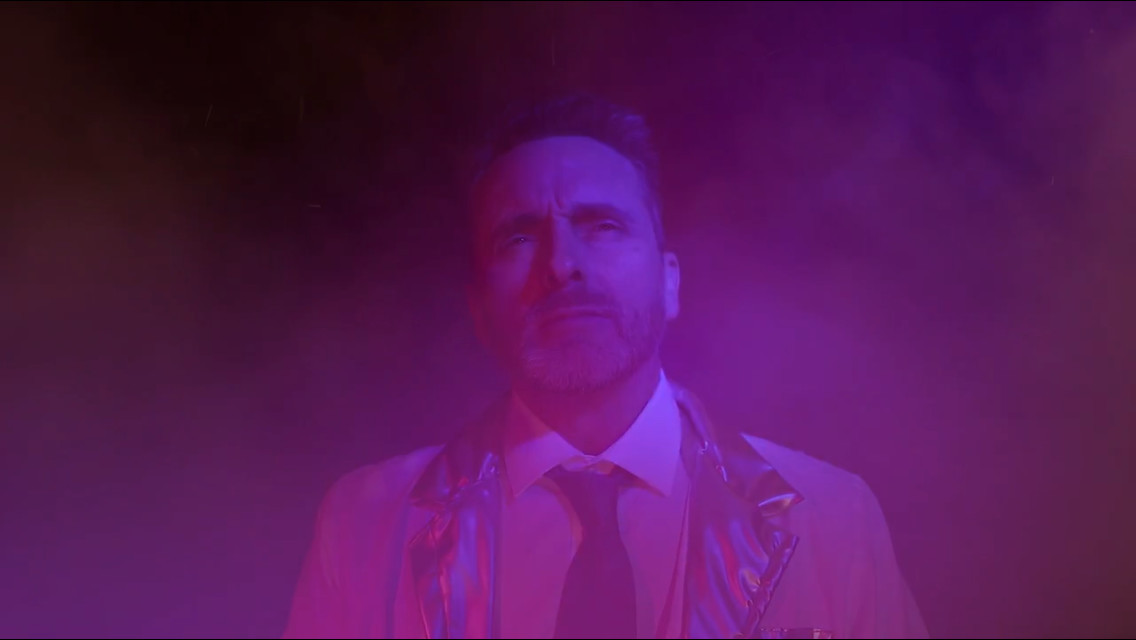 The short film ‘One Minute to Midnight,’ screening in the Pacific Northbest program during the National Film Festival for Talented Youth, was made by Ballard High School student James Brammer. (James Brammer)

The short film ‘One Minute to Midnight,’ screening in the Pacific Northbest program during the National Film Festival for Talented Youth, was made by Ballard High School student James Brammer. (James Brammer)

The National Film Festival for Talented Youth runs Oct. 23- Nov. 1. Festival passes start at $60; pay-what-you-can tickets available for each program. The films can be screened from anywhere in the world.

Cinephiles love to call movies “meditations on” a certain topic: the ocean, motherhood, belonging, you name it. But the poetic, meandering documentary Małni — towards the ocean, towards the shore truly deserves the description. In his first feature-length work, renowned artist and filmmaker Sky Hopinka (Ho-Chunk Nation/Pechanga Band of Luiseño Indians) allows Małni (pronounced: moth-nee) to breathe, giving main characters Sweetwater Sahme and Jordan Mercier space to tell their stories and contemplate life, death and rebirth. The film, spoken largely in chinuk wawa, a language indigenous to the Lower Columbia River Basin, screens through Oct. 25 at the Northwest Film Forum and from Nov. 6–12 at the Tacoma Film Festival. 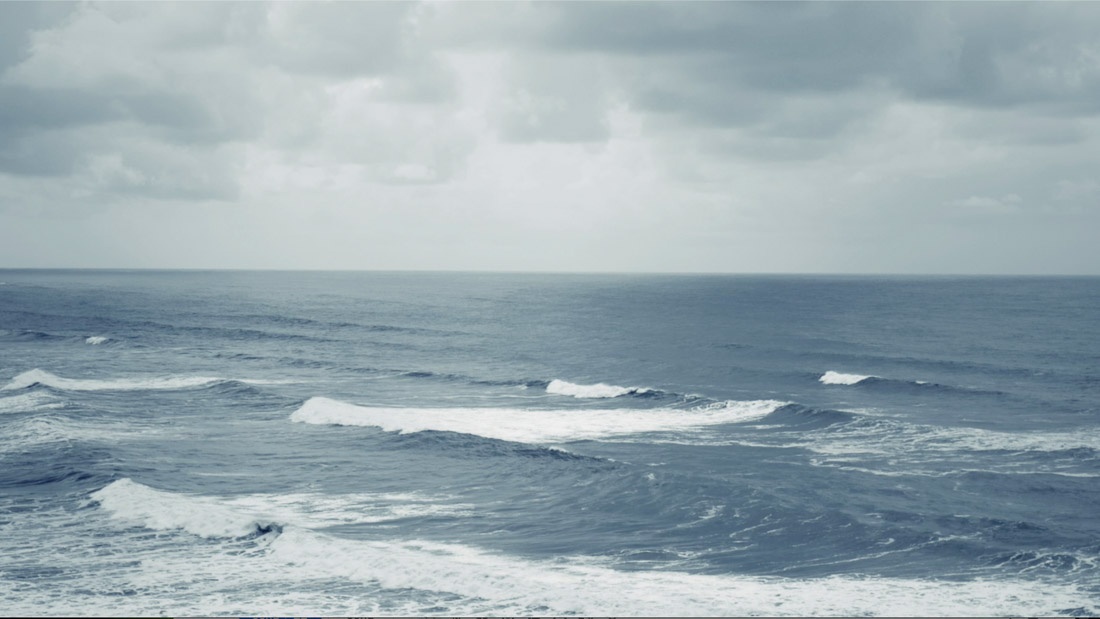 ‘Małni,’ the first feature-length work by renowned artist and filmmaker Sky Hopinka, is a reflection on life, death and rebirth and the importance of water. (Sky Hopinka)

‘Małni,’ the first feature-length work by renowned artist and filmmaker Sky Hopinka, is a reflection on life, death and rebirth and the importance of water. (Sky Hopinka)

Since I Been Down

A powerful new documentary by award-winning local filmmaker Gilda Sheppard, Since I Been Down is the centerpiece of the Tacoma Film Festival (Nov. 6 - 15). It’s a fitting venue, as the film tells the story of how Tacoma’s Hilltop and Eastside communities were swept up in the drug trade, violence and harsh carceral punishment of the 1990s. But it’s also, says Sheppard, “an American story, showcasing one city … as an example of ‘Every town, USA.’” Twelve years in the making, the story follows the Black and brown youth deemed irredeemable “super predators” and sent to prison for life with no chances of parole. One of them was Tacoman Kimonti Carter, who is still incarcerated. Sheppard zooms in on Carter and the power of the in-prison higher education program he started, in which prisoners teach prisoners and find a sense of understanding, healing and power.

'Since I Been Down' screens at the Tacoma Film Festival (Nov. 6 - 15, free), Bellingham’s Pickford Film Center’s annual doc-film fest, “Doctober” (see more picks below; through the end of the month, $8), and the Portland Film Festival (through Oct. 18, $9.99). 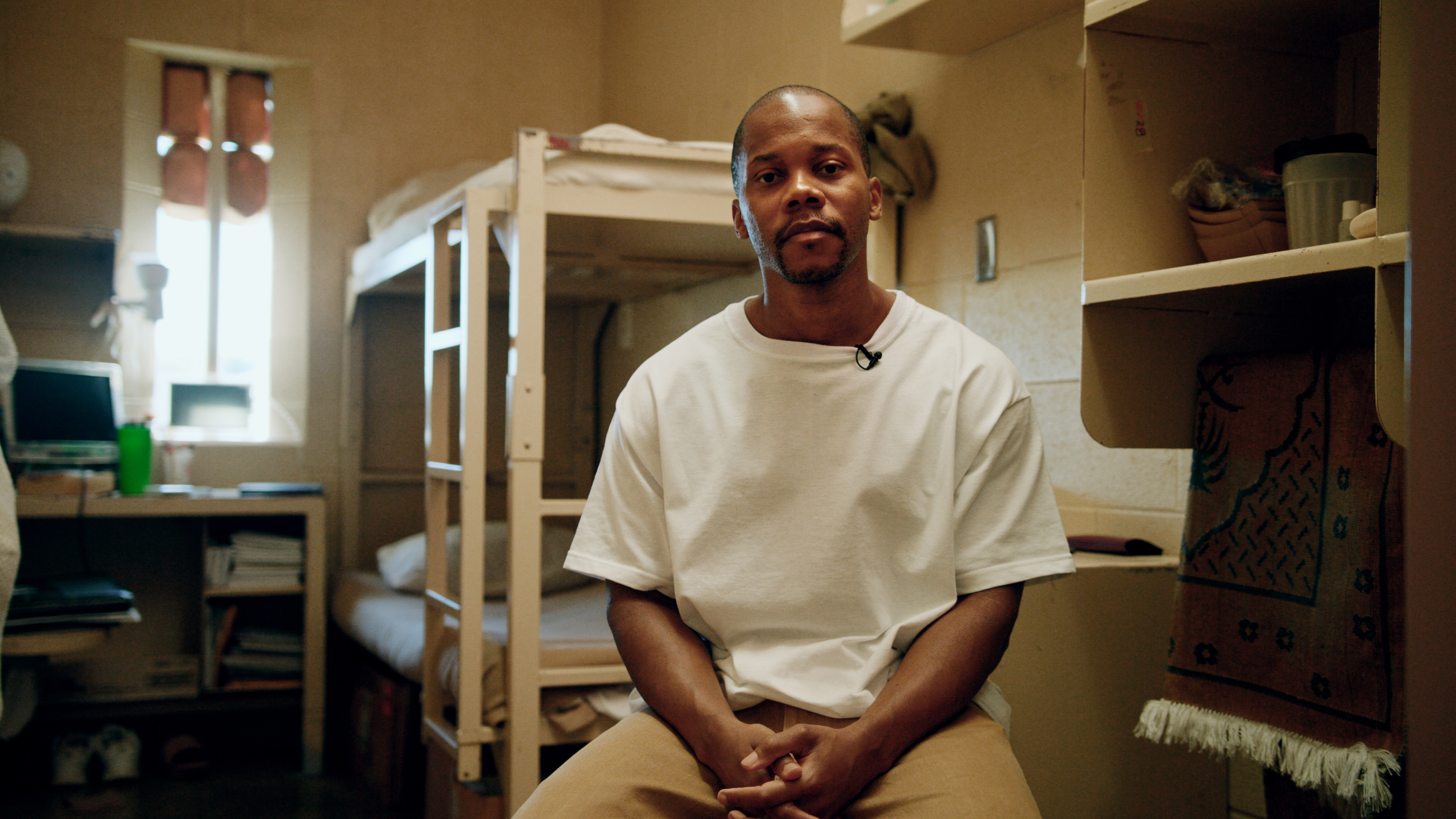 In ‘Since I Been Down,’ filmmaker Gilda Sheppard highlights the story of educator and organizer Kimonti Carter and the power of the in-prison higher education program he started. (Since I Been Down/Prison Education LLC)

In ‘Since I Been Down,’ filmmaker Gilda Sheppard highlights the story of educator and organizer Kimonti Carter and the power of the in-prison higher education program he started. (Since I Been Down/Prison Education LLC)

Other Tacoma Film Festival recs: The lengthy and impressive lineup includes two short docs with a local link that deserve a shoutout: Yai Nin, by local filmmaker Champ Ensminger (filmed in Chiang Mai), and Whale People: Protectors of the Sea, which highlights how Indigenous communities in the Pacific Northwest are sounding the alarm about the plight of the whales. We would be remiss not to also suggest watching (if you haven’t yet) the award-winning Crosscut documentary The Rising, by colleagues Sarah Hoffman and Ted Alvarez.

Other Doctober recs: Doctober offers a few local documentaries free of charge, including Keepers of the Dream, about the role women played in the Seattle chapter of the Black Panther Party (read more about that here), as well as the self-explanatory 24 Hours in the CHOP and the Portland-centric 100 Days of Protest.