The new agency plans to combat gentrification by securing venues for arts and cultural groups. 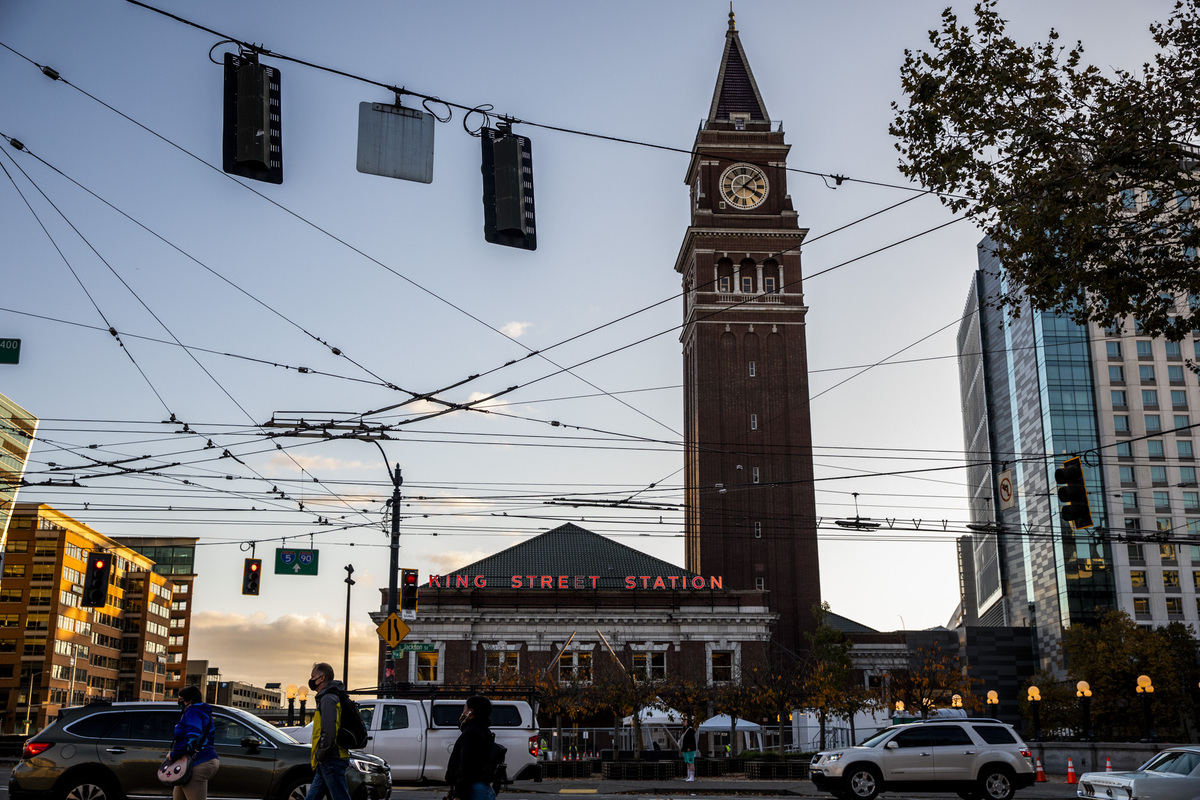 The Jackson Street-facing floor of Seattle’s King Street Station could be transformed into a “Creative Economy Hub.” A new city development company would have to find $2 million for the project.  (Dorothy Edwards/Crosscut)

Even before COVID-19 took a sledgehammer to Seattle’s arts and entertainment sector, things were rough for cultural organizations trying to hold on to venues in the city’s booming real estate market. Every panel conversation about galleries, nearly any article about the closure of yet another music venue came back to the same core issue: There’s just not enough affordable space.

Now, in an effort to combat cultural displacement and gentrification, the city is taking the rare step of creating a “mission-driven” real estate development company so that it can create, purchase, manage and lease property for arts and cultural spaces — which could include a wide range of venues and organizations, including galleries, bookstores, nonprofit dance companies and cultural community centers. The new entity would likely also develop and manage a new "Creative Economy Hub" on the second floor of the city-owned King Street Station.

In the works for years, the new organization, called “The Cultural Space Agency,” aims to be the missing link between the city’s cultural sector, the commercial property world, local government and wealthy benefactors, and will emphasize preserving and developing spaces for communities of color.

“There are a lot of folks who want to make investments in affordability and stabilizing cultural space,” says Matthew Richter, cultural space liaison at the city’s Office of Arts & Culture. “At the moment, their only option is sort of one by one, go and help someone buy a building or fund someone's occupancy costs or give a grant. There's not an organized, cohesive mechanism for impacting issues sectorwide. That's what we hope to bring to the table.”

The Cultural Space Agency will be a type of intermediary organization called a public development authority, or PDA, a hybrid between a private company and governmental organization, also known as a “public corporation.” The independent legal entity will be led by a community board approved by the mayor and city council, will be accountable to the public through open meetings and open records laws, and can receive public funds and city-owned properties. At the same time, it will also be able to receive tax-deductible donations and make revenue (from leasing property, for example), though it won’t engage in business for profit.

An intermediary board submitted the paperwork for establishing the PDA to the mayor last week. If the mayor approves, after a 30-day public comment window, the PDA will be created. The Office of Arts & Culture is dedicating $1 million to fund the startup costs for the next two years, $500,000 of which is earmarked in the 2021 budget currently in deliberation, and will add money to that pot through capital campaigns and philanthropy.

The city has already begun conversations with investors and philanthropists. If all goes well, the organization could hire its first staff position, an executive director, in the first quarter of 2021.

Creating a PDA is an unusual move. Though Washington state has established PDAs to preserve and restore the history and culture of Seattle’s Central District, Pioneer Square and the Chinatown-International District in recent years, the last time the city created its own PDA was in 1985, to develop the downtown Seattle Art Museum.

“The public development authority brings the power of government, the nimbleness of the independent sector and the partnership opportunities of social impact investment all to bear on the same problem,” Richter says.

With the move, the city is following in the footsteps of King County, which established the 4Culture agency in late 2002 in reaction to the post-9/11 economic recession and funding cuts at King County’s arts offices. Other local PDAs manage real estate in tandem with a sibling nonprofit, including Historic Seattle, the Pike Place Market Preservation and Development Authority (which owns and manages the market) and Community Roots Housing, which also oversees the 12th Avenue Arts space on Capitol Hill.

The Cultural Space Agency could work similarly by developing and owning mixed-use buildings and renting out ground-floor spaces to cultural organizations at discounted rates.

But it will be able to do much more. It could purchase the ground floor of major apartment complexes to rent out to organizations, as modeled by the Hugo House literary center’s arrangement on Capitol Hill. Or it could acquire and redevelop existing cultural spaces for or with cultural partners, and act as a property manager of sorts.

The benefit: As an intermediary, The Cultural Space Agency could negotiate lower rental rates, obtain leases where smaller organizations might not have the assets or credit and act as a buffer to make cultural organizations less vulnerable to rent increases or eviction.

“The affordability crisis in this town is one that we're all feeling,” says Tim Lennon, executive director of Central District arts nonprofit LANGSTON. “As we approach the next boom — whenever that's going to be — we're just going to be more and more priced out. This Cultural Space Agency is a tool we can use to really make sure that the heart of this city can remain physically in this city.”

One major project right out of the gate would likely involve the Jackson Street-facing second floor of King Street Station, which is currently vacant and controlled by the city’s Department of Transportation. The city’s arts and economic development departments have developed a proposal to seek $2 million from philanthropic and private sector funders to create a Creative Economy Hub, an arts and professional development center.

Other buildings and venues that could come under The Cultural Space Agency’s umbrella have not been designated, though a 2019 city-commissioned report notes that the city owns a number of cultural facilities that may be better managed by a PDA, such as the Spectrum Dance Theatre building in Madrona, Bathhouse Theatre in Green Lake, the Central District’s Langston Hughes Center, Pratt Fine Arts Center and the Seward Park Clay Studio.

While this arrangement could be beneficial, the end goal is to make sure that cultural organizations can actually own the buildings and spaces they occupy as the ultimate protection against displacement.

The City recently confirmed the transfer of three Central District properties — a former fire station on 18th Avenue, Fire Station 6 and the Central Area Senior Center — to community groups after years of promises.

Through the new agency, a similar process “could be done a lot more efficiently, a lot more quickly” says LANGSTON’s Lennon, who has been working on creating the PDA for years.

The PDA could receive a city-owned property without financial compensation and either redevelop it, co-own it with another organization through a subsidiary limited liability company, gift it or sell it to a community partner or sell it at market-rate and use the profits to purchase other spaces for local organizations. (A 2019 city report on the feasibility of a PDA notes that the city owns nearly 100 properties considered “surplus.”)

The traditional measure of success for a PDA might be how it grows its balance sheet, Richter notes, but with The Cultural Space Agency, “the measure is going to be the degree to which it shrinks its balance sheet,” he says. “Can we own less and less every year?”

Those decisions will be made by a council managing the PDA, made up of community partners. As of now, the agency is led by an interim council consisting of Cassie Chin of the Wing Luke Museum, Sarah Wilke of the University of Washington’s Meany Center for the Performing Arts, arts consultant Vivian Phillips, Coté Soerens from Resistencia Coffee and Lennon from LANGSTON. The group plans to launch the search for an executive director (and decide on compensation) early next year and hand over the reins to a new board then as well.

The million dollars from the city’s arts and cultural fund covers only startup costs, so various capital campaigns will kick off next year. Other future streams of revenue could include local philanthropy. As a PDA, The Cultural Space Agency can also receive larger funding that smaller local organizations might not be able to access, such as federal dollars and grants from major players like the Kresge Foundation and Mellon Foundation, and redistribute the money to local partners.

The city will hear public comment on the proposal throughout the month, and says it hopes to hear from people about which spaces they’d like to see funded.

The proposal, submitted to the mayor’s office last week, caps five years of process. But with venues closed and performances canceled, the sector is living through some of its most challenging moments. The PDA could help the cultural sector — particularly historically underfunded communities of color hard hit by the COVID-crisis — emerge from the crisis in a new way, says Lennon.

“If we're looking at the post-COVID world, there's going to be a lot of empty buildings in town,” he says. “We can't survive as a sector if [these] are just subject to market forces.” Lennon believes The Cultural Space Agency will be able to make sure cultural organizations remain (and grow) once the city regains its power as the pandemic recedes.

“Even in this sort of in-between time,” he adds, “there will be an organization wholly focused on ensuring that when we come out of this, folks who were already being pushed out of the city have somebody else fighting for them.”

This article has been updated to reflect that the City Council will not vote on the creation of the PDA. It requires only the mayor’s approval.