Remembering the Wobblies, the labor union radicals of the early 1900s

In a new novel by Jess Walter, the personal and the political collide during a historic, and still relevant, labor battle in Spokane. 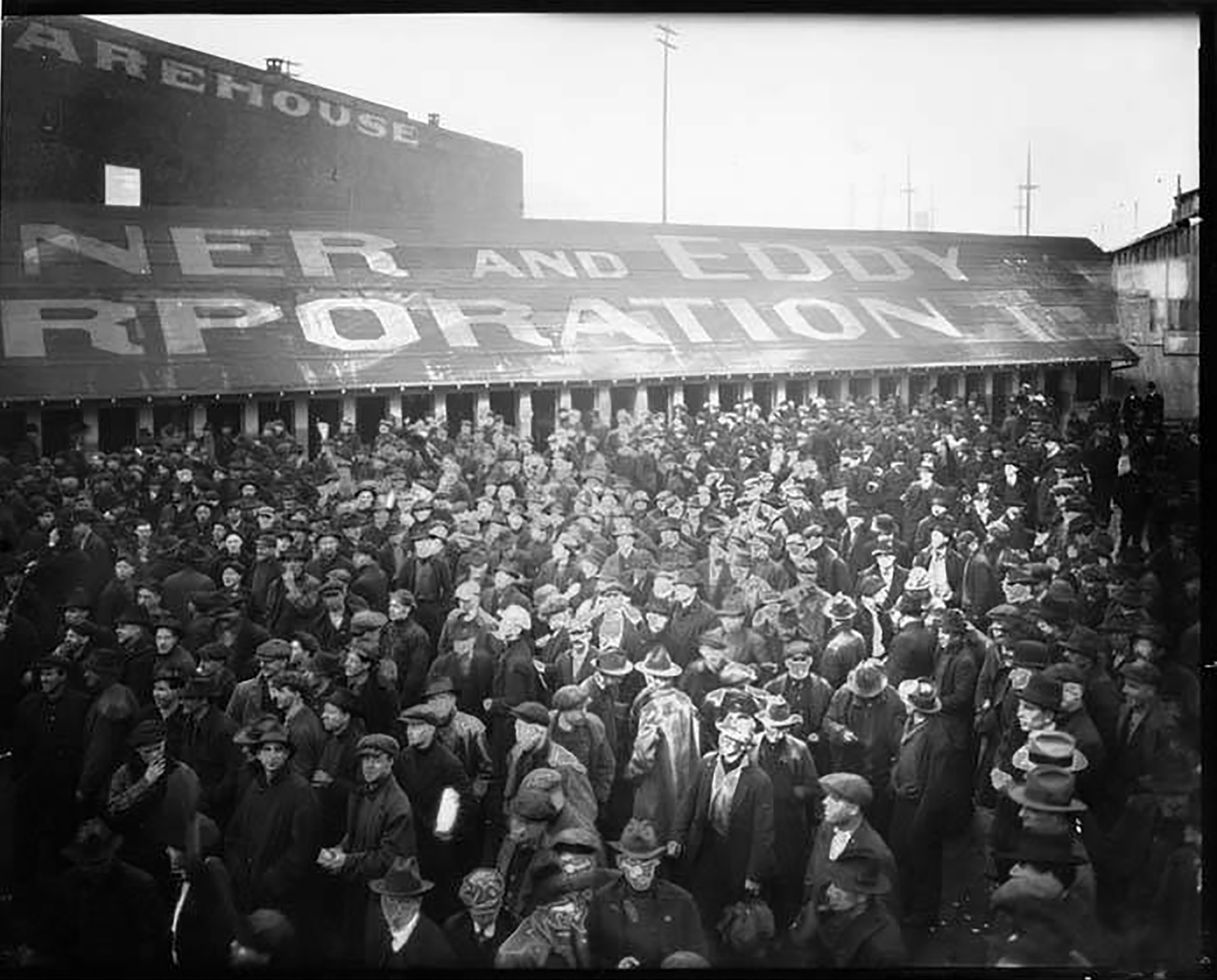 The Seattle General Strike was a work stoppage by more than 65,000 workers in Seattle from Feb. 6-11, 1919. The strike began in shipyards when workers were denied pay increases after two years of World War I wage controls. Most of the city's 110 local unions, including members of the Industrial Workers of the World (IWW), otherwise known as the Wobblies, joined the walkout in solidarity with the shipyard workers. (Webster & Stevens/MOHAI)

In the early 20th century, the city of Spokane was a much different place. Booming with capital investment and bustling with workers of every race, nationality and political persuasion, it stood at the crossroads of seven different railroad lines — a kind of “Tramp Central Station,” as Jess Walter describes it in his terrific new novel The Cold Millions. “[Bums dropped] like apples from boxcars and rail trusses,” Walter writes, “humps from Chicago, Denver, Seattle: white, black, Indian, Chinese, Cossack, Irish, Italian, Finn — barstools and benches bent with their backs.” Such confluence and polarities were bound to spark conflicts, which, when they came, more often than not involved Wobblies.

I first heard the word “Wobbly” when I was a child heading off into sleep, listening to bedtime stories. During the 1970s, my parents were hippies — back-to-the-landers of a sort, in Oregon and Washington state, when rent was $50 and a pack of cigarettes 20 cents. Dropouts from the University of Oregon, they picked fruit on commercial farms during part of the year, then lived cheaply in small towns for the rest, gardening, baking bread, engaging their respective artistic practices. (Consciousness expansion, I believe, was also on the itinerary.)

At some point during those years, they met an elderly, alcoholic fruit picker named Rex, with whom my father became close. Decades later, my father would still speak with pride about the photograph and blanket that Rex had given to them as gifts. Rex also told them stories — about his time as a Wobbly, decades earlier, when he had fought to create “one big union” for all workers because, as the old slogans went, “labor is entitled to all that it creates” and “an injury to one [worker] is an injury to all [workers].” During one of those summers, Rex was found by the side of a rural road, not far from the farm where he and my parents worked, his head bludgeoned in with a tire iron. He had been on his way to the store for a bottle of wine.

My parents told me these stories (minus the grisly murder details) when I was growing up in Seattle during the 1990s. The tales were my first introduction to a group that once held a particular cultural mystique in the Pacific Northwest. A radical union that believed all wage workers, of all races, genders and occupations, should unite to overthrow the capitalist system, the Industrial Workers of the World, also known as the Wobblies, organized miners, farmworkers, lumberjacks and other groups with remarkable success during the first two decades of the 20th century. The union emerged as a potent force in Seattle, Spokane, Tacoma and other cities nationwide. (Forays into two smaller northwestern cities, Everett and Centralia, didn’t go nearly as well, leading to massacres of Wobblies by right-wing vigilantes in 1916 and 1919, respectively.)

It is into this history that Walter’s novel wades, reaching deep into the historical record to invent a story that has nearly as much to say about the present as it does the past. The early decades of the 20th century, like those of the 21st, were characterized by massive wealth disparities, rampant labor exploitation and the occasional worker uprising. (If the deck was stacked against workers, workers occasionally turned over the table.) In The Cold Millions, Walter, the Spokane-based author of six previous novels, including bestseller Beautiful Ruins (2012) and The Zero (2006), which was a finalist for the National Book Award, homes in on the “free speech fights” of 1909, when Spokane city officials banned public speeches in an effort to suppress Wobbly organizing. In response, labor radicals flooded the city, provoking conflicts with police and the mass imprisonment of many of their members.

Walter’s main characters are two brothers, Rye and Gig, a pair of travelling “tramps” who find themselves in Spokane in the months leading up to the free speech actions. Gig is older, more charismatic, and politically engaged. Prone to quoting Tolstoy and Marx (and to spending more time down at the union hall than actually looking for work), Gig is a true believer in the Wobbly cause — a young Rex, as I imagine him, called to righteous struggle but destined for disappointment. The younger brother Rye, on the other hand, is more ambivalent about the whole revolutionary business: “Plenty of unions [he] could see them joining for steady work and a slice of the pie, but the IWW seemed more tramp church than labor outfit to him.” Rye’s dreams are more modest. He wants a regular job, enough money to buy a bit of land, and a house where he and his brother can live in peace.

The brothers’ collision with world-historical figures, such as the legendary Wobbly and later Communist agitator Helen Gurley Flynn, or Frank Little, a well-known IWW organizer who was lynched in Butte, Montana, only a few years later, lead them into the thick of historical events: the Wobbly free-speech actions, the resulting police riot, and the imprisonment of nearly 500 non-violent men and women, including Gig and Rye.

After Rye is released but Gig is not, the book shifts its focus even further to the younger brother, who was hesitant about joining the fight in the first place but now finds himself smack dab in the middle. Walter’s decision to make Rye, rather than the more overtly ideological Gig, his central character is a wise one. Through Rye we gain access to a perspective of early 20th century Spokane (its saloons and flophouses, hotels and theaters, courthouses and clothiers) that is initially free of political dogma. It is through Rye that we first encounter and are eventually won over to the Wobbly cause. It’s also through Rye that we must weigh the worth of engaging in a risky political fight against his basic human need to protect himself and his family. This dilemma will be familiar to any worker who has been part of an organizing drive, then as well as now.

The Wobblies did eventually win that particular battle. The free speech bans were reversed. But one needs only a superficial understanding of our contemporary labor relations to know how dramatically they lost the war. The dream of one big union, capable of going toe-to-toe with capital, faded, while more conservative unions amenable to racial capitalism ascended, winning a seat at the table for some (mostly white and male) workers and, for a time, narrowing the gap between rich and poor. Over the past few decades, those gains, partial as they already were, have largely been reversed.

Again, a rapacious capitalist class seeks to consolidate their power and wealth at the expense of a disorganized and distressed labor force. Again, severe income inequality restrains attempts to enact political and economic democracy. And again, a tiny band of radicals struggles, perhaps quixotically, to overthrow those unjust systems and remake them anew.

While it is tempting to leave the Wobblies in the past or relegate them to the status of myth, a few of them are still around. Less visible than they were a hundred years ago, they nonetheless represent workers nationwide in industries as diverse as mental health counselling, roofing and bicycle repair in the ongoing quest to unite the working class against capitalism. Recently, in Portland, Oregon, the IWW made a different kind of history by successfully organizing a portion of the fast food chain Burgerville. It was the first time in this country that fast food workers had ever formed a union.

Toward the end of The Cold Millions, after Rye has experienced his tentative conversion, he finds himself riding a train with a cynic named Early, who asks whether he thinks the Wobbly dream of “one big union” is even possible.