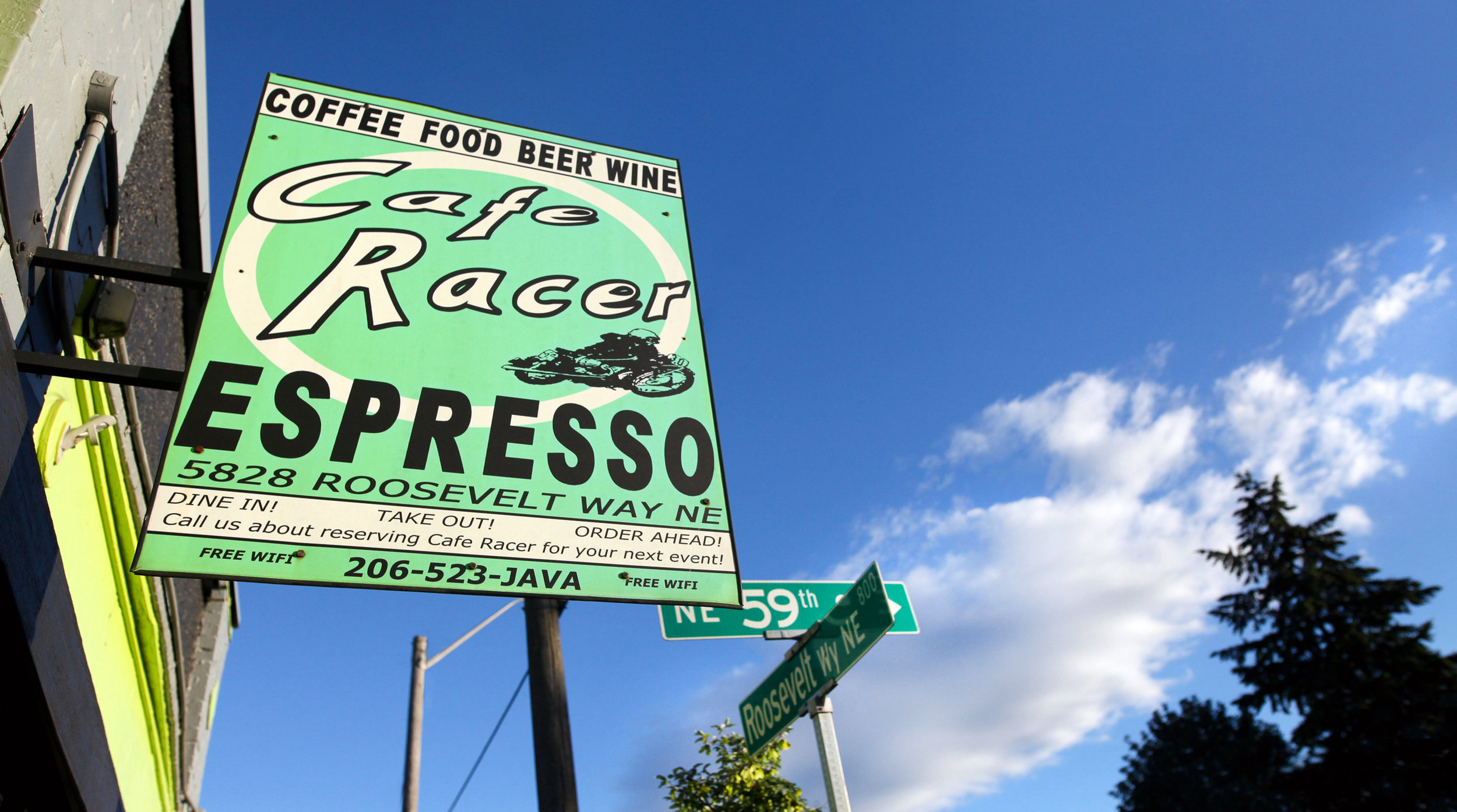 The old Café Racer sign in the Ravenna neighborhood. The restaurant, bar and music venue temporarily closed due to COVID-19, and has pivoted to an online radio station in the meantime. (Café Racer)

Over the past few weeks, I’ve been listening to a new player in the local music scene — one that is filling my ears with a wide swath of music and helping to tide me over until we can be in its physical presence again: Café Racer Radio.

You may be familiar with Café Racer, the coffee shop/restaurant/live venue known for its eclectic taste — both in music and décor. (The Ravenna spot proudly housed the Official Bad Art Museum of Art.) I always assumed it had been around since the ’90s, as that was the vibe: retro kitsch, a warren of colorful rooms, comfort food, arty regulars. But it opened in 2004 (as Lucky Dog Espresso) and grew into a beloved community hive with anticipated weekly events like the “Racer Sessions,” which sizzled with experimental jazz. Tragically, it was also the site of a horrific massacre in 2012.

In 2017, Seattle venue veteran (and Roosevelt High School grad) Jeff Ramsey purchased Café Racer from owner Kurt Geissel, who had struggled to keep it open after the shooting. Ramsey also hit financial trouble, due in part to Seattle’s skyrocketing rents, but as he told me recently, “People are passionate about Café Racer.” As evidenced by three successful crowdfunding campaigns over the years, he said, “Our fans have shown us it’s too important to let this go.”

That has proved true even during COVID-19. With the venue on the brink of the state-mandated closure, one of those fans, Dan Theisen, a daily customer with a tech background, suggested keeping the Café Racer community alive by way of an online radio station that plays only local music. It came together quickly, with Ramsey’s wife Cindy Anne as cofounder. And while Café Racer Radio doesn’t have a frequency on the dial, I’m tuned in. 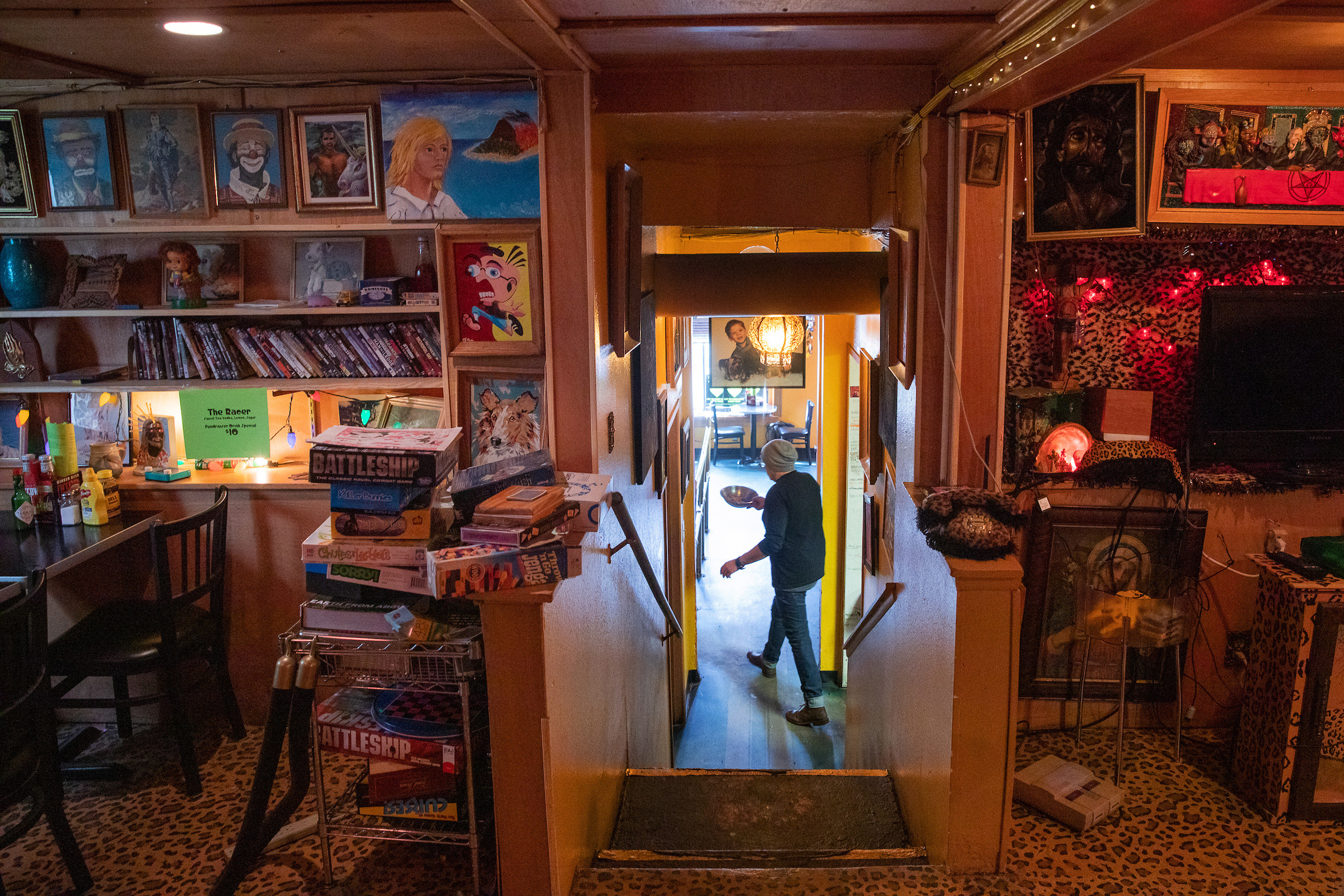 It’s such a pleasure to sink into a wash of local music — across so many styles and decades. On one day, while listening to the “Genre Fluid” programming block, I started jotting down the different bands I heard: R&B by Parisalexa, jazz guitar by Bill Frisell, indie folk by Ravenna Woods, neo-bluegrass by The Half Brothers, alt-country by The Picketts, pop by The Postal Service, garage-jazz by Industrial Revelation. What a mix!

I’ve been a longtime KEXP listener (since the station’s KCMU days), and it remains the only music station I turn to in my car. But while the grown-up KEXP still plays lots of local bands, there’s something truly special about listening to an hourslong playlist — “from queer 1930s jazz to what’s being made in basements today,” Ramsey riffed ­— and knowing it’s all from inside state lines.

Nellie Albertson, Café Racer’s band booker, now works with Ramsey on programming the online stream. “It took us so long to get to 2,000 songs!” she told me. The team has been working with local record labels and record stores to increase the catalogue. It’s now at 25,000 songs — and Ramsey is still seeking more submissions (emerging bands, take note). He’d like to get more country songs, as well as locally created classical and hard-to-find punk rock. The only requirement: band members must be from or based in Washington.

“My favorite thing about it is that it’s all local,” Albertson said. “It’s a really important constraint, yet it allows for so much room.” 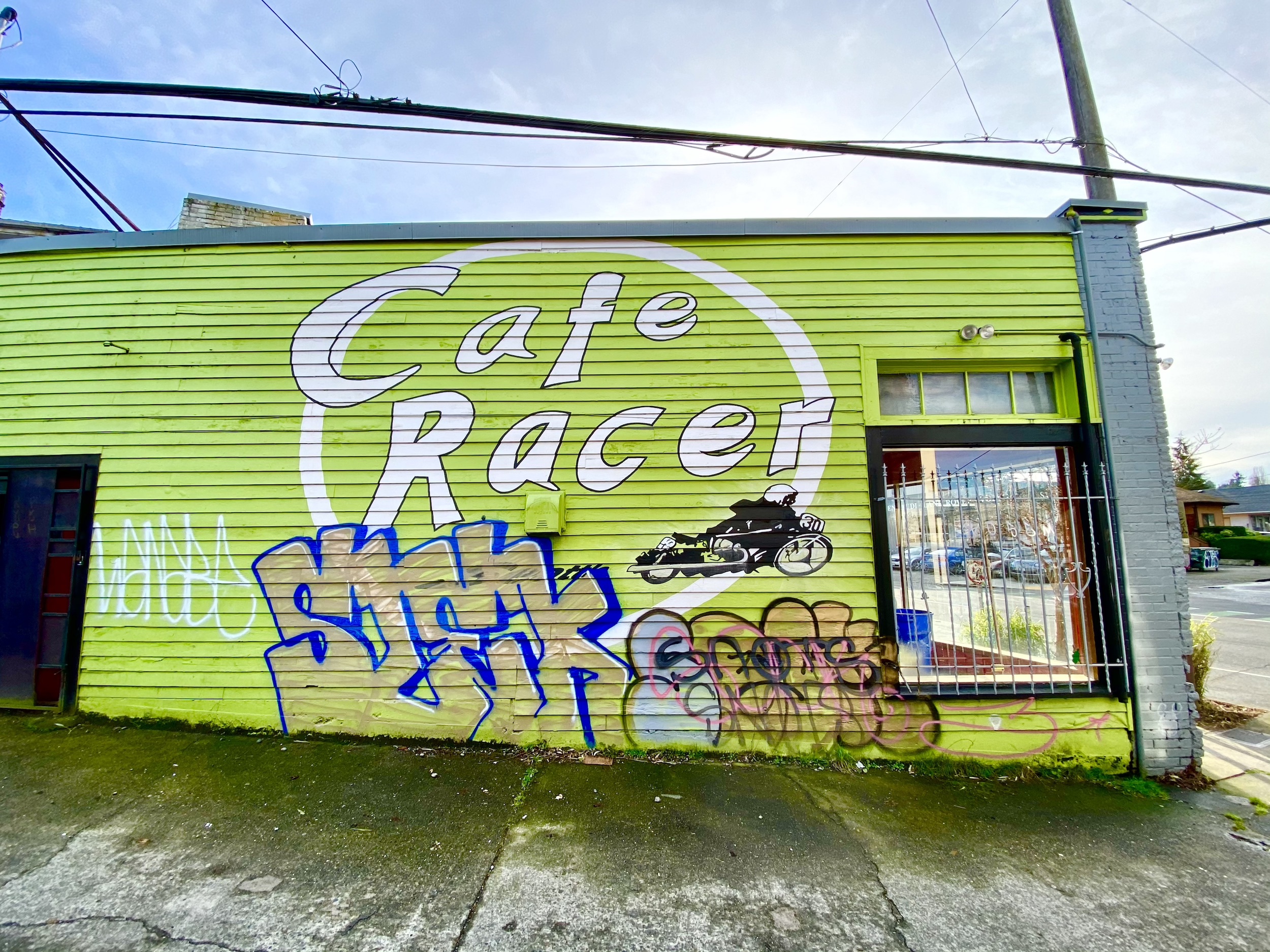 The beloved Café Racer building is now up for lease. Owner Jeff Ramsey plans to open in a new location when COVID-19 restrictions are lifted. (Daniel Spils)

The beloved Café Racer building is now up for lease. Owner Jeff Ramsey plans to open in a new location when COVID-19 restrictions are lifted. (Daniel Spils)

Much like the café itself, the online-audio embodiment of Café Racer is ever evolving. Since launching quietly in June, the station is continually expanding its shows (‘Mericana, Jazz in the Afternoon), tweaking its website and adding DJs. It’s a labor of love — all Racer staff are currently volunteer, but as of this week, listeners can tip the hosts via Venmo.

“I’m not biased,” Lovely told me. “I’ll play anyone from Macklemore to someone brand new, as long as it’s mixed and mastered.” Before COVID-19 curtailed live music events, Lovely worked with the collaborative HyV Network, which showcased emerging local artists in shows at small venues like the Blue Moon Tavern (recently profiled on PBS), Cha Cha Lounge and Café Racer. Even when live music returns, she says, she’ll keep doing the show — which she’s expanding with segments from local healers such as meditation guides, physical trainers and nutritionists. “It’s just another way we can help the community,” she said.

Despite all the new music, for me Café Racer Radio strikes a nostalgic note, both for the pre-coronavirus days when we could discover such bands live and in person, but also for the older, smaller, scrappier Seattle. There’s a whiff of it here, in the DIY aesthetic, with its simple website and hosts prerecording intros and identification breaks on their phones.

Ramsey says right now he’s seeing about 100 to 150 regular listeners per week — an intimate club, which I can almost feel while listening. “The goal is not to be big,” Albertson explained, “But to do a bunch of cool things.”

One of those is Back in the Day, a new podcast from Ramsey (watch for it next week), in which he flips through old issues of Seattle music newspaper The Rocket (1979-2000) and gives a sense of what was going on musically at that time. In the first episode, he looks at the August 1991 issue and notes the feature story, about local music label Sub Pop: “Sub Flop: Is the Price of World Domination Too High?” (Spoiler alert, it wasn’t. Sub Pop opened its second retail shop downtown earlier this week.)

The feature might be targeted to “olds” like myself, but it also offers a longer-term view of Seattle music’s highs and lows. Things are certainly dire for venues right now, having been closed since March. Forthcoming grants from the recently passed Save Our Stages Act, as well as the Washington-based Keep Music Live relief fund, should help ensure these dormant spaces will still be around to reopen once it’s safe to sing, nod and rock out together in large groups. And when will that be? Who knows?

In the meantime, Café Racer’s radio pivot stands as a symbol of the Seattle arts and music community’s resilience and ingenuity. Like other venues — including indispensable all-ages club The Vera Project, which celebrated 20 years just last night — Café Racer will return eventually. But in a slightly different incarnation: Ramsey has secured a new space nearby, with a landlord who he said, “gets it.” I look forward to returning to these spots, standing close to strangers and listening.

by / January 14
Article continues below