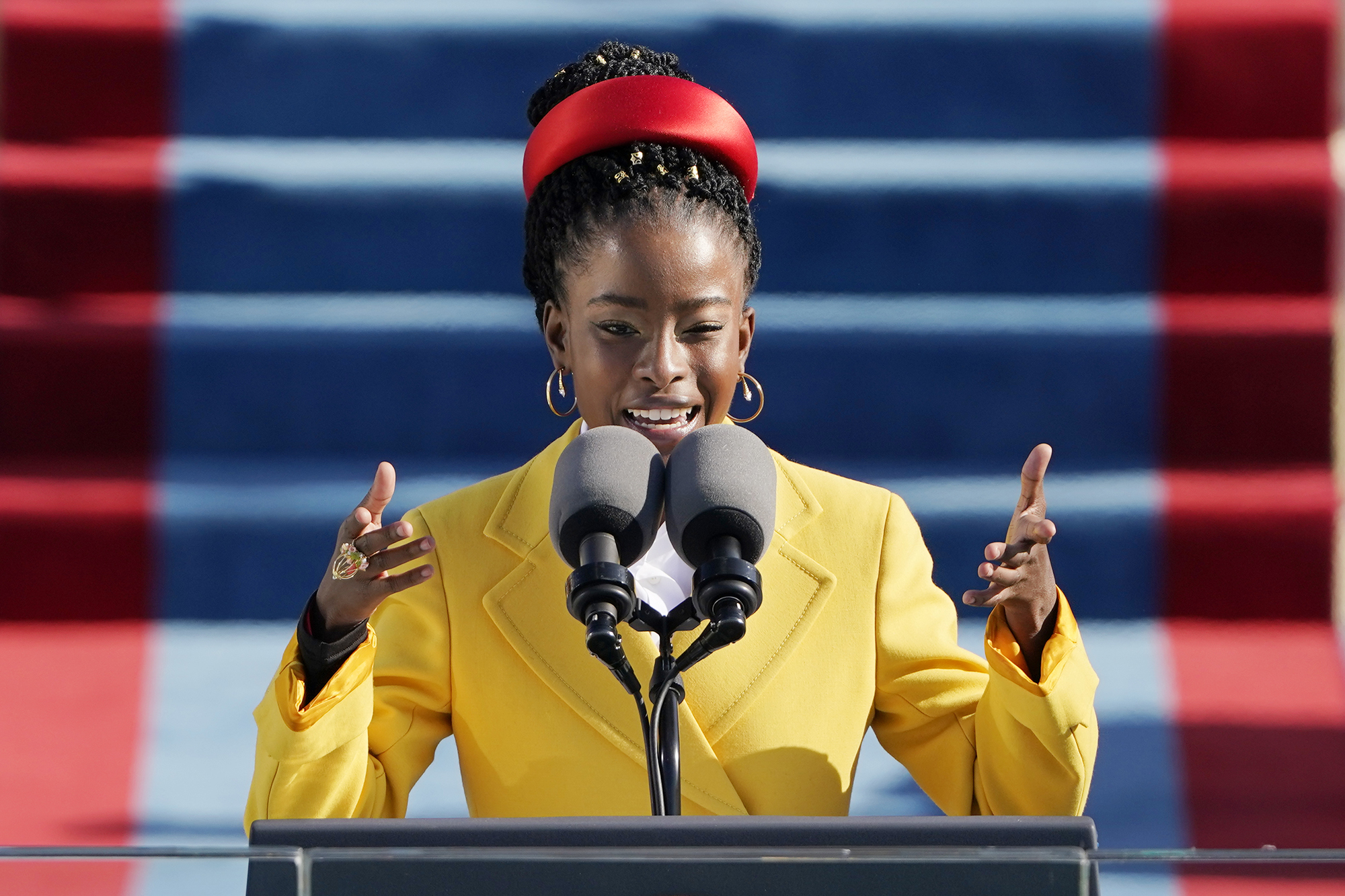 Los Angeles poet Amanda Gorman reads her poem “The Hill We Climb” during the presidential inauguration at the U.S. Capitol in Washington, D.C., Jan. 20, 2021. (Patrick Semansky/AP/Pool)

Imagine getting invited to read a poem on live television in a lineup featuring Lady Gaga, Jennifer Lopez, Garth Brooks and, also, the new president and vice president of the United States. Imagine being the least known — and by far the youngest — person on the program. Imagine taking the stage wearing a coat of pure sunshine and a gold ring in the form of a caged bird singing. Now: steal the show.

We saw it happen Wednesday, when 22-year-old Amanda Gorman read her poem “The Hill We Climb” at the inauguration of President Joseph Biden on the steps of the Capitol. Amid the star-studded roster, Gorman’s stirring performance was one of the only ones that brought those gathered on stage to their feet in spontaneous ovation. In six minutes, at a formal federal ceremony, the young woman demonstrated how art can crystallize the heft and hope of a historic moment with a few brilliant strokes.

“When day comes we ask ourselves / Where can we find light in this never-ending shade?”

Gorman welcomed us into her poem with a question that many have pondered in recent months, and then used the full power of arts to convey her answer — which, like the best art, hit both deeply personal and universal notes.

She stood at the podium as a living painting, a self-proclaimed “skinny Black girl” haloed in a fiery red headband and robed in incandescent yellow, her cheeks dusted with shimmer. Her gestures were balletic: gracefully choreographed to push back on “the belly of the beast,” to walk the fingers of one hand up the back of the other in time with “the hill we climb.” The cadence of her delivery was both theatrical and musical, mesmerizing by way of rhyming and emphasizing.

She not only recited her poem, she danced, sang and sculpted it. 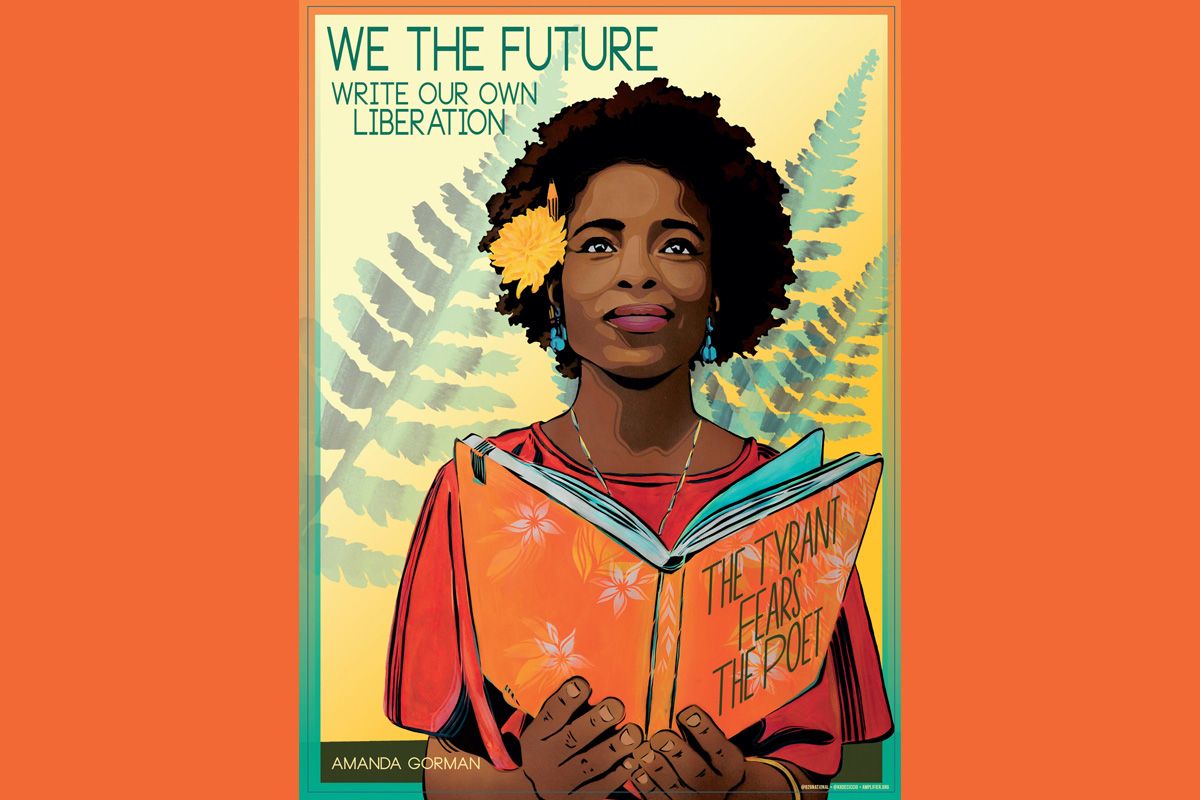 I first learned Gorman’s name about a year ago, when she was featured in a poster campaign by Amplifier, the Seattle nonprofit design lab that creates art to underscore social movements. The group’s “We the Future” collection showcases motivating young leaders across a variety of causes. In Gorman’s poster, created by Oakland artist Kate DeCiccio, she wears a yellow flower in her hair and a pencil behind her ear. She holds a book, the cover of which features a line from another of her poems: “The Tyrant Fears the Poet.” (If that message resonates, you can download the poster for free.)

Thanks to the recent slew of press, I now know more about Gorman. She was the Los Angeles Youth Poet Laureate at age 16, and at 19 became the first National Youth Poet Laureate. As a child she struggled with a speech impediment — just like Joe Biden — and turned to poetry to channel her voice. She made use of another art form to help her conquer the “r” sound, repeatedly reciting the song “Aaron Burr, Sir” from Lin-Manuel Miranda’s musical Hamilton. She told Hillary Clinton she’d like to make her own presidential run in 2036.

Art begets art. How many writers (myself included) have already penned new pieces sparked by Gorman? How many artists will put her image to paper and canvas?

Just hours after her reading, Seattle DJ Cheryl Waters of KEXP radio — who has also surpassed a speech impediment, caused by a recent bout with tongue cancer — layered audio of the poem over the instrumental “Zion” by local band Polyrhythmics. An hour later, fellow KEXP DJ Larry Mizell, Jr. offered his own creative take, mixing Gorman’s vocal with the jazz piece “Umoja (Unity)” by The Jahari Massamba Unit. (Listen via the KEXP archive by toggling to Jan. 20, 2021, at just after noon and 1 p.m.) 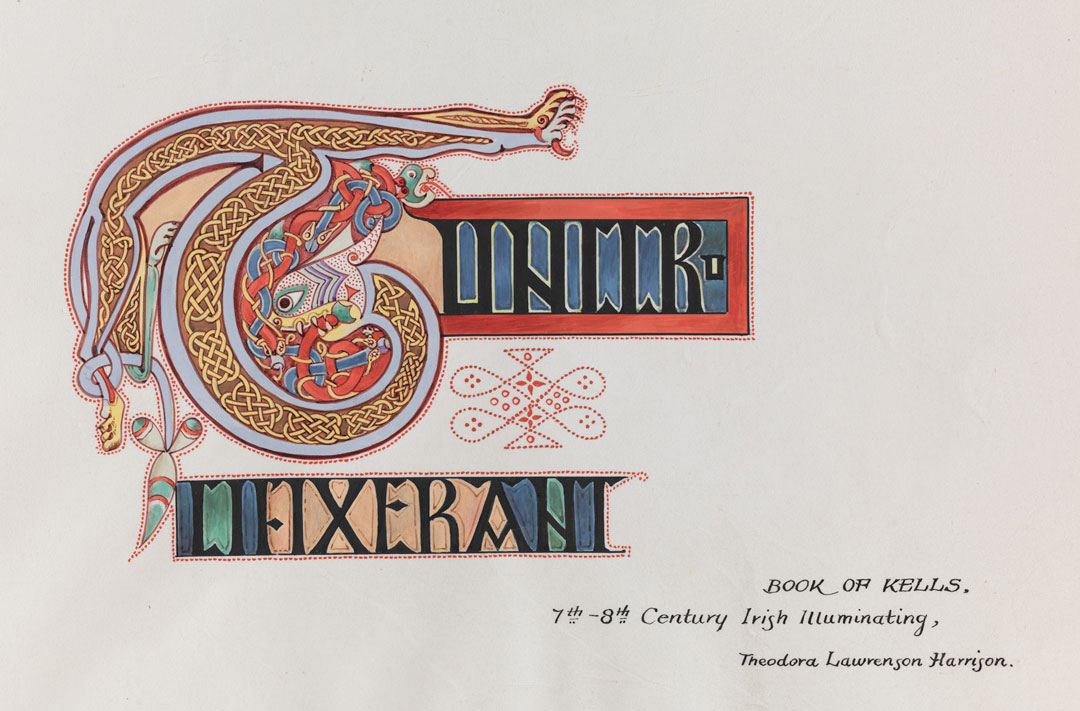 Seattle illustrator Theodora Harrison was one of many Northwest artists paid by the federal Public Works of Art Project for creative work, painstakingly hand-painting replicas from the ancient Book of Kells in 1934-1935. (Photo: Elizabeth Mann/Seattle Art Museum)

Seattle illustrator Theodora Harrison was one of many Northwest artists paid by the federal Public Works of Art Project for creative work, painstakingly hand-painting replicas from the ancient Book of Kells in 1934-1935. (Photo: Elizabeth Mann/Seattle Art Museum)

Gorman’s performance also got me thinking about the tradition of the inaugural poem — embraced by only four presidents to date — and what it says about the role of art in civic spaces, the importance of art being valued at the national level. (Like the National Poet Laureate, the National Youth Poet Laureate is co-sponsored by the Library of Congress.)

There have been several recent pieces written about the need, given the devastation COVID-19 has wrought in the cultural sector, for a New Deal for the arts, something akin to President Franklin Delano Roosevelt’s Works Progress Administration, which put people back to work after the Great Depression.

Under the WPA, through subprograms such as the Federal Art Project, artists were paid to put their special skills into practice for public works. The result was thousands of artworks, including by big-name Northwest artists Jacob Lawrence, Mark Tobey and Morris Graves, and (unduly) lesser-known locals like Theodora Harrison, Fay Chong and Agatha Kirsch. As part of its exhibition Forgotten Stories, Northwest Public Art of the 1930s (forced to close by COVID-19), Tacoma Art Museum produced a fascinating 20-minute video with curator Margaret Bullock about the impact of the federal program and the Northwest artists involved.

In July, Crosscut contributor Misha Berson wrote about the need for a fresh take on the New Deal. This past weekend, New York Times art critic Jason Farago wrote on a similar topic, outlining an extensive plan for how the new Biden administration could craft a federally sponsored arts initiative.

“What is art’s function?” Farago asked. “What does art do for a person, a country?”

He based his answer on Aristotle’s: catharsis. “You go to the theater, you listen to a symphony, you look at a painting, you watch a ballet. You laugh, you cry. You feel pity, fear. You see in others’ lives a reflection of your own,” he wrote. “And the catharsis comes: a cleansing, a clarity, a feeling of relief and understanding that you carry with you out of the theater or the concert hall.” Or perhaps as you close the screen on which you watched a young poet capture the gaze of a nation.

Listening to Gorman, I felt the catharsis. I dared to imagine a future in which a poet could become president.