From art to infrastructure, the New Deal shaped Seattle’s future 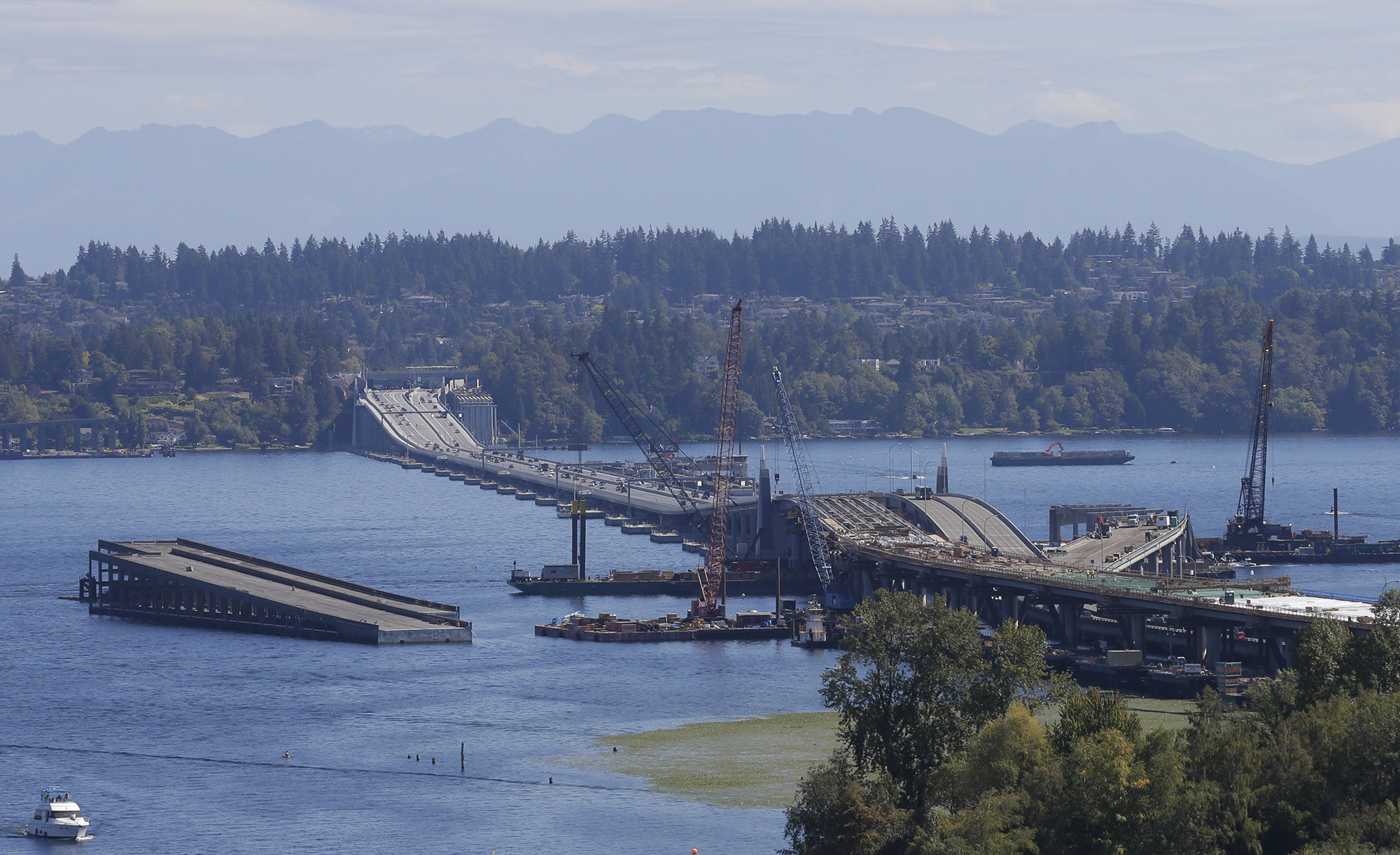 Every day is infrastructure week at our place.

In front of our apartment they’re building the new State Route 520 bridge. That’s right, it’s not done yet. Enormous cranes, pile drivers, the removal of massive slabs of concrete, work boats, vehicles that clank like tanks in the night, workers in hard hats shouting to one another. They are working 24/6, with Sundays off. There is no real limit on the amount of noise they can make, day or night.

As I watch, I remember the opening of the old Evergreen Point Bridge in 1963, the last remnants of which are being hauled away now. We called it “the new bridge” for years. It’s an odd feeling to outlast “modern infrastructure,” something you remember being built. I felt the same about the Kingdome, the massive but ultimately ephemeral sports stadium located in the industrial district. It opened in 1976 and was torn down in 2000, before its bonds were paid off.

The old 520 bridge was outdated for seismic reasons. The new "new" bridge is more robust, and caters to changing needs. There’s room now for bikes, pedestrians and, someday perhaps, even light rail. If earthquake faults played a role in the new design, so too do the work habits of a changing region. Companies such as Microsoft wanted more capacity for cars and transit. Workers used to commute from the Eastside to Seattle for work, but back in the 1990s, the tide changed, with many tech workers living in the city and commuting to Redmond. The bridge was expanded to serve a growing "edge city."

This late 1930s apartment complex I live in is the product of an older infrastructure push. Unlike the 1963 bridge, it is still going strong. Hundreds of units of what we would call today “workforce housing” were put up in the late 1930s with the help of New Deal financing. Press reports when the complex opened touted it as the largest multifamily development west of the Mississippi, the Great Depression having put a major kibosh on growth. Times were tough in Seattle, too. Between 1930 and 1940, the city gained only 2,700 residents, and a series of Hoovervilles for homeless and unemployed people sprang up across the city. By the mid-1930s, Seattle’s unemployment rate hit 27%. Still, as part of the recovery, Seattle prepared for the future by building public housing and expanding options for in-city working families.

Coming out of the 1918 flu pandemic, Seattle was already stagnating economically during the previous decade. The combination of increased racism and division, with the rise of the Ku Klux Klan and anti-immigrant laws in the 1920s, plus Wall Street recklessness resulting in the 1929 crash, put the U.S. into a major hole. Franklin D. Roosevelt’s New Deal programs were a massive effort to put the country on a new footing. It wasn’t perfect. There was waste, pork and racism mixed in with some of its policies. Many Black workers were left out of the initial design of Social Security, which exempted domestic workers as a way to earn votes from Northern and Southern politicians who did not want Blacks and whites treated equally. But the New Deal is still held up as an impressive model for sweeping change and recovery in a time of need. 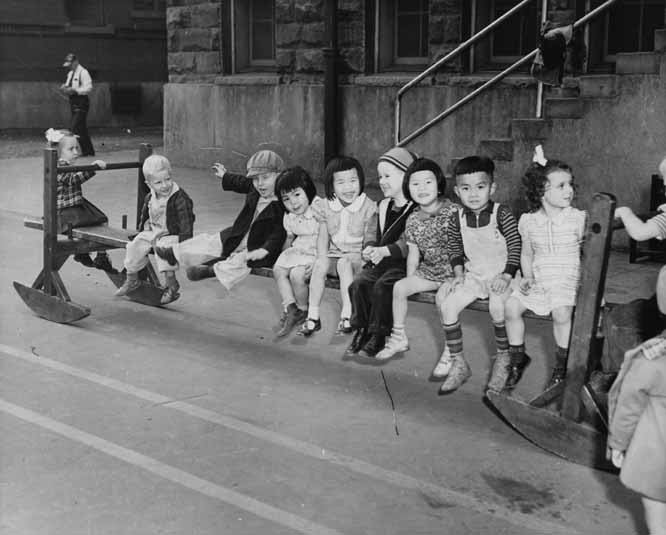 A group of young children on a playground in King County. The photograph was taken by a Works Progress Administration photographer, circa 1935-1943. (Washington State Historical Society)

A group of young children on a playground in King County. The photograph was taken by a Works Progress Administration photographer, circa 1935-1943. (Washington State Historical Society)

In addition to providing public assistance to the unemployed, the New Deal delved into multiple levels of society. From Black theater troupes to mural art in almost every post office, it bolstered the arts and artists. It transformed the energy industry (and hurt the salmon) with massive Columbia River dam projects like Grand Coulee and Bonneville, which laid the groundwork for cheap power, light, irrigation and farming. The Civilian Conservation Corps improved parks; fought wildfires; built lodges, campgrounds and trails; planted trees; and tended forest lands.

New Deal work impacted infrastructure up and down the state. According to the University of Washington’s website on the Depression, the Works Progress — later Projects — Administration funded work for “28,000 miles of road, 1,000 bridges, 26 libraries, 193 parks, 380 miles of sewers, 15,500 traffic signs, 90 stadiums and 760 miles of water mains in Washington.” One of those bridges was the innovative first Lake Washington Floating Bridge, connecting Seattle to the Eastside. The feds paid 40% of the bridge’s cost. It would be hard to argue that these investments and this building spree weren’t transformative.

You can hardly go anywhere in Seattle today without feeling the New Deal’s legacy: The Naval Reserve Armory on Lake Union, now the Museum of History and Industry; the reconstruction of the Ballard Bridge; neighborhood playfields from Georgetown to Camp Long to Cowen Park; replacement of the Pioneer Square “totem” pole; the Washington Park Arboretum; improvements to the University to Washington campus; and Woodland Park Zoo are just a sampling of contributions. Thousands of workers were employed in the process of physical and social improvement.

A New Deal loan underwrote the Seattle Housing Authority to create affordable and integrated housing for 3,000 people at Yesler Terrace, as well as helping to fund the private development of the workforce apartments where I live. Housing, homelessness, federal and local funding, public and private, striving for greater equity: These are still, and increasingly urgent, priorities as we face pandemic and economic recovery, including healing the preexisting conditions of inequity exposed by the coronavirus and its economic fallout. 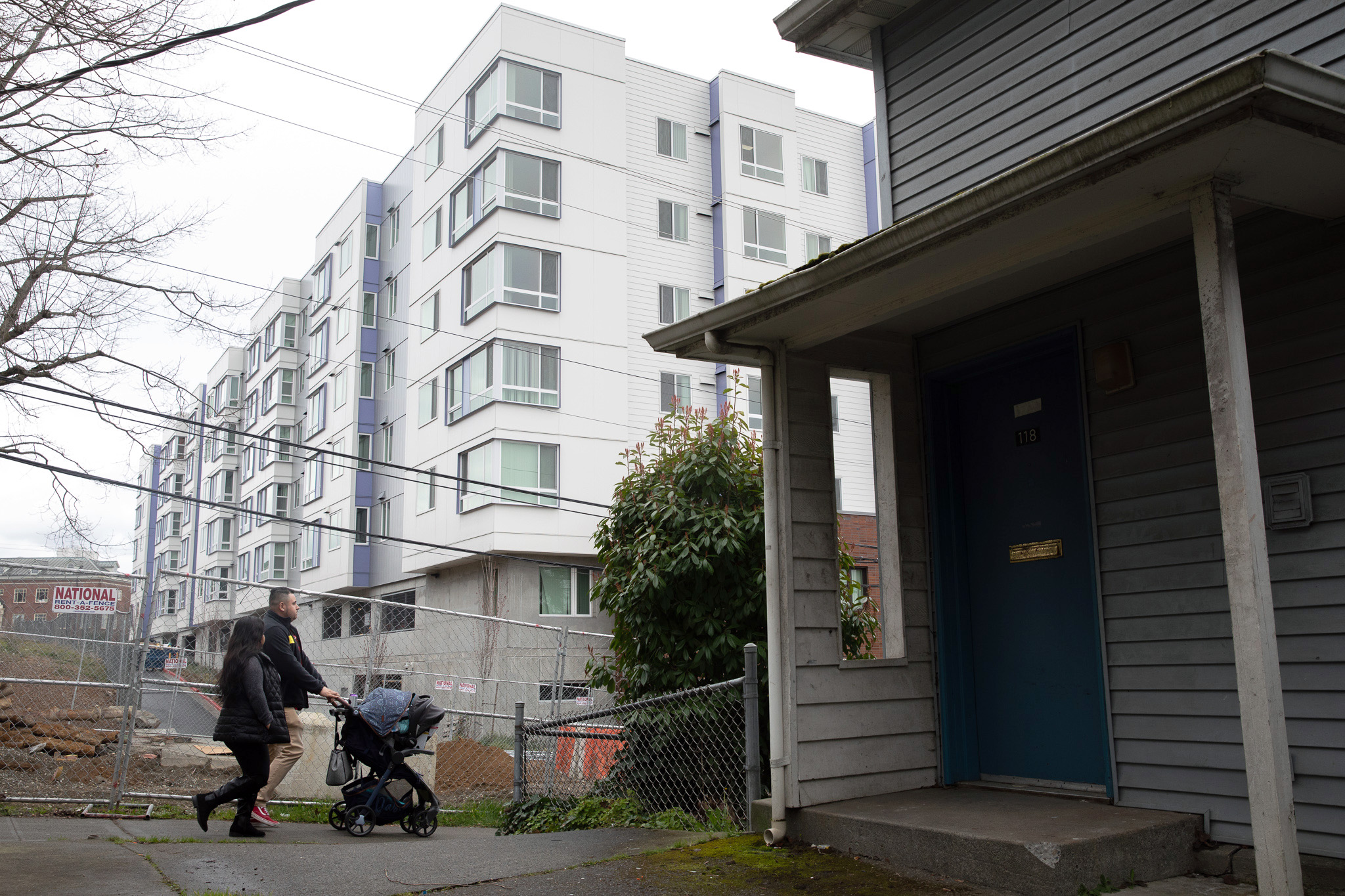 Red Cedar apartments in Seattle's Yesler Terrace neighborhood seen across the street from the former housing development, a first of its kind in the country when it was built. (Matt M. McKnight/Crosscut)

Red Cedar apartments in Seattle's Yesler Terrace neighborhood seen across the street from the former housing development, a first of its kind in the country when it was built. (Matt M. McKnight/Crosscut)

The New Deal built both physical infrastructure and social infrastructure that have served us for nearly 90 years. These two structures go hand in hand. Transportation that is more equitable and clean energy that is sustainable, helps create jobs and lowers carbon emissions are both akin to the prior commitment of hydroelectric power in the ’30s. Expanding rail and transit, moving to electric vehicles and building the related support networks are as crucial as building bridges. Expanding broadband is not unlike the Roosevelt-era efforts at rural electrification, with the benefit of expanding work, medical and school access across the land.

President Joe Biden’s proposed $2 trillion infrastructure plan is consciously in the mold of the New Deal. There will be debates about fairness, cost, what projects are legitimate or unproductive. If passed, implementing it won’t be easy. But one of the advantages of a New Deal-like push is not only to open a broad front for progress, but perhaps to inspire more people to work together for a common cause.

Despite the personal inconvenience of the 520 bridge construction, some perspective helps. It will shape the life and landscape of the city for future generations. Nothing we do now will last forever, of course, but as I watch the cranes and hear the banging of constant construction, I can't help but reflect on the profound impact of the New Deal over the past century. The real question is what would our country, our state, our city be like if it we hadn’t done the New Deal? I’d rather have the reality it gave us over going down the road of that opportunity not taken.