A member of the Lummi Nation, Bellingham writer Rena Priest will bring attention to local poetry, climate change and the loss of vital natural resources. 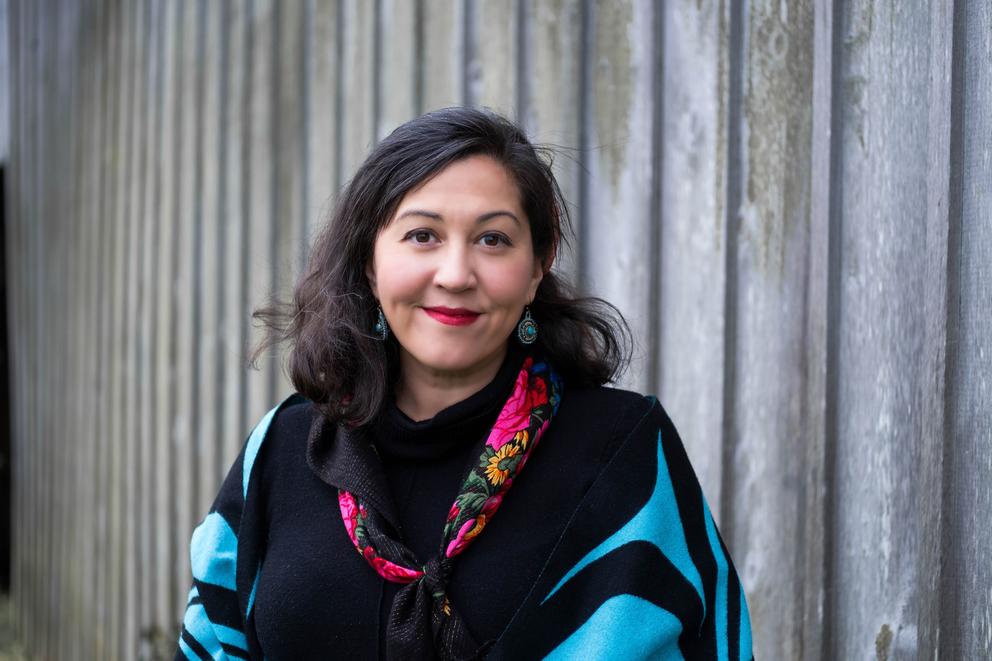 On the first day of National Poetry Month, Bellingham-based Rena Priest is named the new Washington State Poet Laureate. She'll be a statewide ambassador for poetry during a two-year term. (Hillary Cagey)

After years of entering poetry contests and submitting to literary journals, Rena Priest had developed a habit: She would slip a copy of a New Yorker cartoon into the envelope along with her work. The image showed a car with a driver and passenger stuck in a sea of traffic. The caption: “Try honking again.”

Though the cartoon was mostly for laughs — and to soften the potential blow of rejection — that’s how it felt trying to make it as a poet: honking into the void, hoping to make progress. These days, Priest, 42, is breezing through the fast lane. Today, April 1, the Bellingham-based poet has been named the new Washington state poet laureate, the state’s highest honor in poetry.

The author of two poetry books and a member of the Lhaq'temish (Lummi) Nation, Priest is the sixth poet and first Native person to be selected for the two-year term, a program of the Washington State Arts Commission and Humanities Washington.

“When I got the news, it was a moment of elation — and then relief,” Priest says. “If you're not having any success with the thing that you're doing and love to do, and you've made sacrifices for it, it starts to feel like ‘what if I was wrong?’ ... Now, I feel this huge sense of relief that I did follow my calling — and that it was not for naught.”

Despite her writerly self-doubt, Priest has had her share of literary success: Her debut, Patriarchy Blues (2017), was honored with an American Book Award and her poetry has appeared in a variety of anthologies and literary journals, such as Poetry Northwest and Poets.org, the website of the Academy of American Poets. She also recently won a Vadon Foundation Native Artist Fellowship worth $10,000.

Priest’s term as poet laureate, appointed by the governor, officially starts April 15 and runs through April 14, 2023. With a virtual Passing of the Laurel ceremony, Priest will take over from Seattle poet Claudia Castro Luna, who has held the position for three years and succeeded previous laureates Tod Marshall, Elizabeth Austen, Kathleen Flenniken and Sam Green.

Poet laureate selection panelist Jasmine Mahmoud, an assistant professor of arts leadership at Seattle University, says she was “endlessly impressed” with Priest’s work and application. (Which didn’t include the New Yorker cartoon, but it’s pinned near Priest’s desk as a permanent reminder.) “Ruminative and meditative, her poetry weaves thoughts, feelings, and insights about the earth, its peoples past, present, and future, and our practices, including as they concern the environment,” Mahmoud wrote in a statement.

The poet laureate is not just tasked with producing new work, but expected to be an ambassador of poetry itself, lifting up other poets and connecting with readers and writers across the state through readings, workshops and lectures. Some of Castro Luna’s tenure projects included the Washington Poetic Routes, a digital map of location-based poems, One River, Many Voices, a series of poetry readings and writing workshops along the Columbia River and a call for Poems to Lean On during the pandemic.

“Washington state has very rich poetry communities across the state, not just in the Puget Sound, but in Eastern Washington, Ellensburg and the peninsula, Vancouver,” the outgoing poet laureate says. It was during a poetry event in Ellensburg that Castro Luna heard Priest read for the first time. “She's so expressive and so warm,” Castro Luna says. “That will serve her very well as she travels and engages with communities across the state.”

During her tenure, Priest plans to draw attention to the importance of preserving “the beauty and integrity of the natural world” in Washington, particularly as it concerns tribal lands. A leading theme will be “solastalgia,” the anguish and grief caused by environmental change.

“Washington is such a beautiful place. I've grown up here and spent most of my life here,” Priest says. “My reservation where I grew up, my homeland, is beautiful beyond compare. I've seen how the state, the landscapes [surrounding the reservation] have changed. Right now, that's an important discussion to be having, without feelings of guilt or blame around how these beautiful places have been altered, but how we can fix it [and] get back to a healthier ecosystem and environment.”

Though she hasn’t settled on her projects yet, she has a few ideas brewing. She would love to add poetry to scientific flora-and-fauna placards at beaches and parks. She’s also hoping to visit tribes and tribal schools throughout the state to build mini-anthologies of locally written poetry for each community, as well as a statewide anthology of Native writing. Priest also dreams of asking various tribal and other communities across the state to submit “salmon poems” for a collection.

Her first endeavor is launching this month, which is National Poetry Month — a free letterpress-printed handout conceived as a “Poem in Your Pocket.” The poem is by youth poet Sadie Olsen, written in English and also translated into Xwlemi Chosen (Lummi language).

Its title, “Thank You Poem,” proved challenging to translate: There’s no direct word for poem in the Lummi language, Priest says, but the director of the Xwlemi Chosen program, Ted Solomon, told her either “prayer” or “song” would convey the closest meaning. Perhaps that’s because the poetry is embedded in the language. “The language itself is so poetic and beautiful,” Priest says. “The magic contained in certain words, it's just so pretty. Like, the word for cottonwood tree is a ‘dancing tree.’ And the word for river is the same as the word for the Milky Way.”

Priest didn’t grow up speaking Xwlemi Chosen, but was always a “writerly kid,” as she puts it, fond of rhymes and poems. She wrote her first poem at age 7, inspired by the prompt “springtime.” The words came to her easily, she says. Her teacher sent it to the local newspaper. “I saw my name and was like, ‘Oh my God, this is a big moment for me.’ ”

After a detour in theater studies, returning to poetry by way of a class at Western Washington University taught by Bellingham poet Jim Bertolino felt like a homecoming. She then moved to New York to get an MFA in poetry at Sarah Lawrence College. The poems in Patriarchy Blues were shaped by her time in the city: the sound of neighbors arguing through the apartment wall, “sexy” girls on billboards, car alarms blaring on the street, the names of red nail polishes clustered in a salon, such as “Freaky Friday Night” and “Gypsy Girl.” In one poem, Priest proposes her own shade: This Predatory, Capitalist, Patriarchy/ is Killing Me and I’m Trying/ to Learn to Like It.

In many of these poems, Priest takes herself out of the equation by acting as an observer of society’s strange (not to mention sexist and racist) tendencies, using snippets of conversation to make characters come alive to humorous effect.

“I'm terribly amused at the world all the time,” Priest says. Some of her work starts out with a serious tone “and then all of a sudden it’s really funny. Because life is like that,” she says. “I feel like, in order to survive, I had to use [humor] to my advantage.”

After her studies, Priest moved back to the West, to Bellingham, where her poetry once again molded itself around the (natural) surroundings. In her second book, Sublime Subliminal (2018), she gravitates toward themes that bring her more pleasure: nature, matriarchy, playing with language itself.

Vera Rubin, did you ever wonder, she asks the famous American astronomer in the sweeping poem “Super-Sacred,” if dark matter weren’t made/of women like you? Quietly/ doing 90% of the work/of holding together the universe? Keeping it all from flying apart,/ just like a family matriarch?

One-third of the way into the poem, she tells the reader, in parenthesis: (This is my real Indian poem, the one the/admissions board and a certain readership/have been waiting for.) and then offers up beads, feathers, song and dance, along with the requisite mention/of mother Earth, and the moon.

“I feel like there's a lot of, maybe accidental, censorship of Native writers by editors, and [audience] expectations of what Native poetry should be,” Priest says. She hopes poems like “Super-Sacred” can “challenge and broaden a reader's ideas of Indigeneity beyond the limited range of topics that are considered appropriate for American Indian literature to address.” Take, for example, “Daffodils,” which kicks off like this:

The Indigenous poet
writes poems of outrage
about oppression.
Nobody cares.
She gets depressed.

On one hand, she wants to write about daffodils — have it be just a poem about daffodils and whatever makes her heart sing. But the non-Indigenous reader expectations are always looming.

At the same time, as an Indigenous poet, she also feels an internal imperative to talk about “the extinction and disappearance of species, and erosion of the quality of life and degradation of the environment, all impacting my tribal community,” Priest says.

From the loss of the fisheries to unkept promises of treaties to the thinning of salmon and orca populations, “it hasn't quite hit the average person in America the way that it has hit tribal communities who have relied on the integrity of the natural environment,” Priest says.

Still, through (and perhaps against) the grief over climate change and the loss of vital natural resources, Priest’s poetry has shifted into a more reverential gear. “I'm trying to celebrate the natural world,” she says. “Show how it was, so that people can have an idea of how it could be again.”

Priest offers a taste of what that future could look like at the end of “Daffodils,” wherein she explains a phrase in Xwlemi Chosen that translates to “What the hail,” which she says is “the closest we get to a swear word.”

The Indigenous poet says,
“Stang tse temxwila!”*
and writes about daffodils,
and the untouchable beauty
of living a poet’s life

Virtual launch of the poetry anthology Solstice: Light and Dark of the Salish Sea, which includes work by Priest. April 10, 7 p.m., via Village Books on Zoom.

Priest will officially take over from previous poet laureate Claudia Castro Luna during a Passing of the Laurel event organized and hosted by the Lhaq'temish (Lummi) Nation, Humanities Washington, the Washington State Arts Commission and the Washington Center for the Book. April 14, 6 p.m., via Zoom.

Priest will read alongside poets Jasmina An, Beetje Kuipers and others during an Artsmith / Darvill''s Bookstore Salon Series. April 15, 5 p.m., via Zoom.

Priest will be the guest of honor during a SpeakEasy poetry reading series on April 24, 7 p.m., via Other Mind Press on Zoom.

Federal recognition provides tribes with critical health care and education. But there are nations the U.S. refuses to recognize.