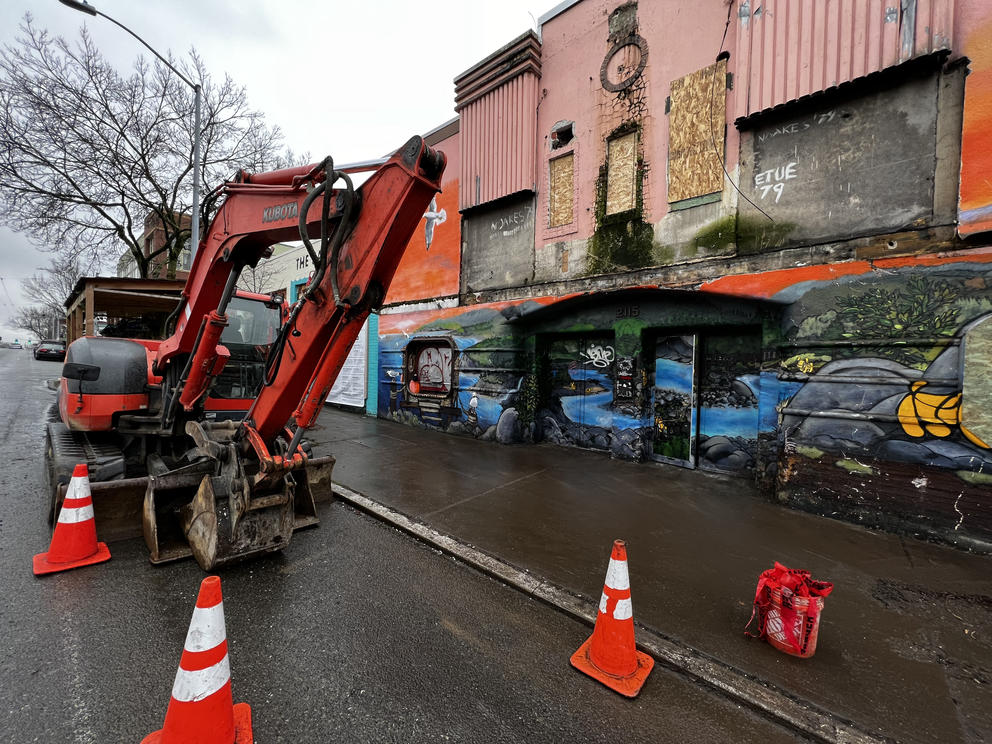 It’s the first ArtSEA newsletter of 2022, but I won’t dare make any predictions about what the new year will bring. As an exercise in hindsight, I looked up the first newsletter of last year, which landed Jan. 7, 2021, the day after the insurrection at the Capitol Building in Washington, D.C. The political climate had reached a historic nadir, the delta variant was just starting to wreak havoc in India, and the local arts landscape remained largely quarantined. So naturally, I wrote about Jimi Hendrix’s “Star-Spangled Banner.”

Comparatively, things may seem slightly less doomed (unless you’ve just watched Don’t Look Up). But at this moment, navigating 2022 feels a bit like attempting to cross that glass bridge from Squid Game. For the sake of posterity: Yesterday, I started my day with coffee and a COVID-19 rapid test in my kitchen. While waiting to see if the telltale line appeared, I read Facebook posts from friends stuck in various cities, whose flights home were canceled by unprecedented weather events and COVID-related crew shortages.

Then I scrolled through photos of the destruction of a local cultural legacy — Wallingford’s Guild 45th movie theater.

As KIRO radio reporter and local historian Feliks Banel reported, the art deco marquee of the dilapidated yet beloved movie house was torn down this week, apparently out of public safety concerns after a vehicle collided with it. In a remembrance on the Wallyhood blog, Gary Shigenaka shared a timeline and some terrific vintage photos. Trevor Marsh of the neighboring Octopus Bar was able to save part of the iconic sign, after capturing a bummer video of its removal.

Confusion remains as to what will happen to the structure itself; the city told Banel that demolition paperwork has been filed for the “newer” Guild theater, two doors down, not for the original 1919 building. But having sat vacant since 2017, and now stripped of its historic façade, there doesn’t seem to be much hope for reviving it. (Speaking of endangered movie houses, might Jody Allen and Vulcan be persuaded to save the Cinerama this year?)

Like so many Seattleites, I saw countless movies at the Guild. Yes, several of the middle rows seemed to sit in a structural ditch — and the bathrooms were positively medieval — but it still served up that irreplaceable, old-school charm of going to a picture show. 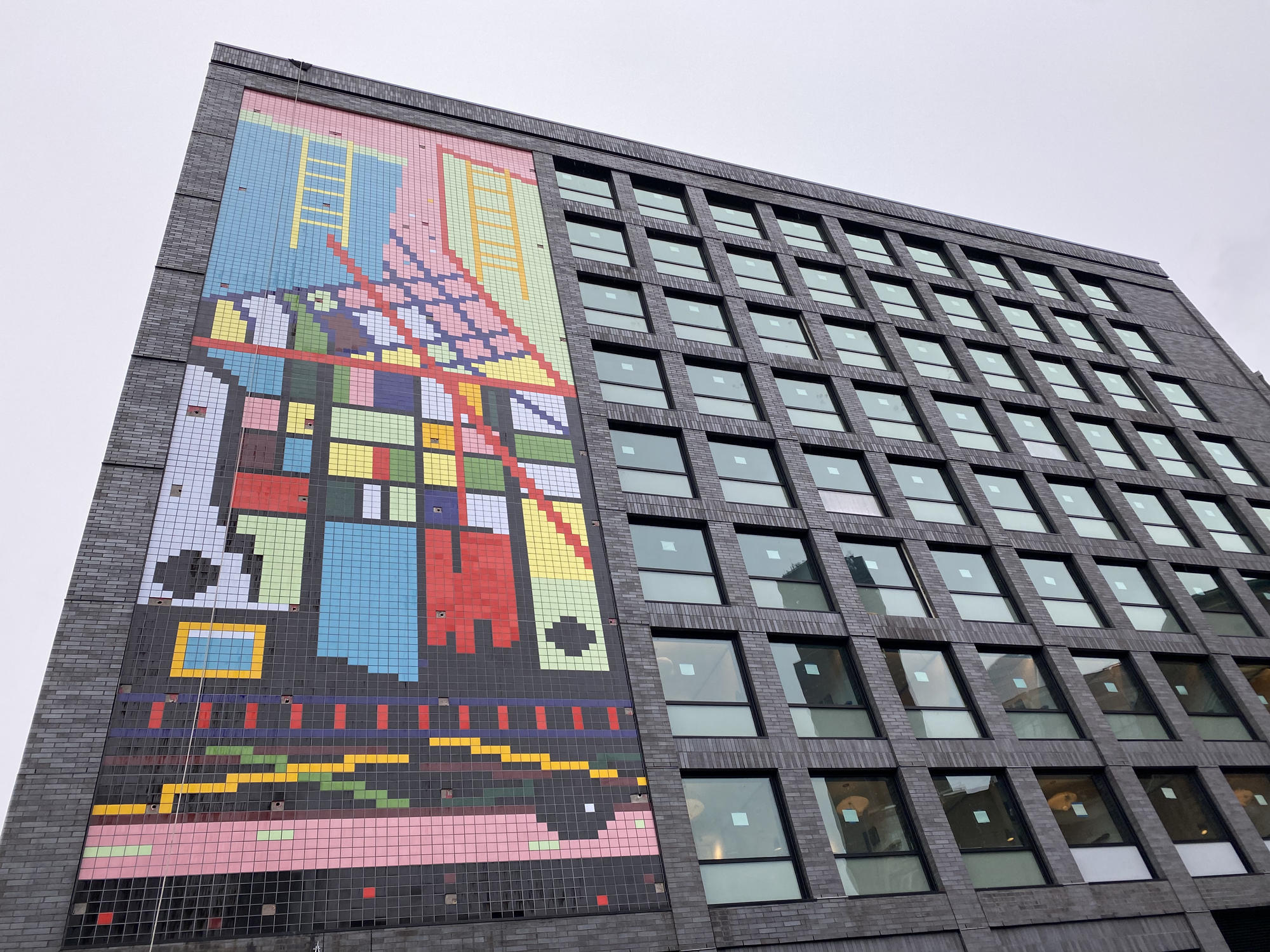 One thing we can count on for 2022 is that old Seattle will continue to be subsumed by the newer, shinier, big-boxier version. While these cityscape changes can feel unsettling, among them are some positive glints, including two new permanent art installations — both of which map the evolving face of Seattle.

Yesterday, I went down to Pioneer Square to check out “Schema,” the almost-finished mosaic tile mural by Tacoma artist RYAN! Feddersen (a member of the Confederated Tribes of the Colville Reservation). Her towering vertical piece (26x74 feet) graces the outside of the new Citizen M hotel and employs the vivid colors and techniques of turn-of-the-century Native American beadwork to create an abstracted map of Pioneer Square.

It’s quite a stunning piece, one that succeeds on several levels. The trapezoidal grid is instantly recognizable as the neighborhood’s weird layout (shaped by competing settler street plans), but it also includes layers that hint at the area’s Indigenous upheaval, as well as clear references to historical artifacts, like the ladders used to access shops when main street became the “underground” after the 1890s regrade. 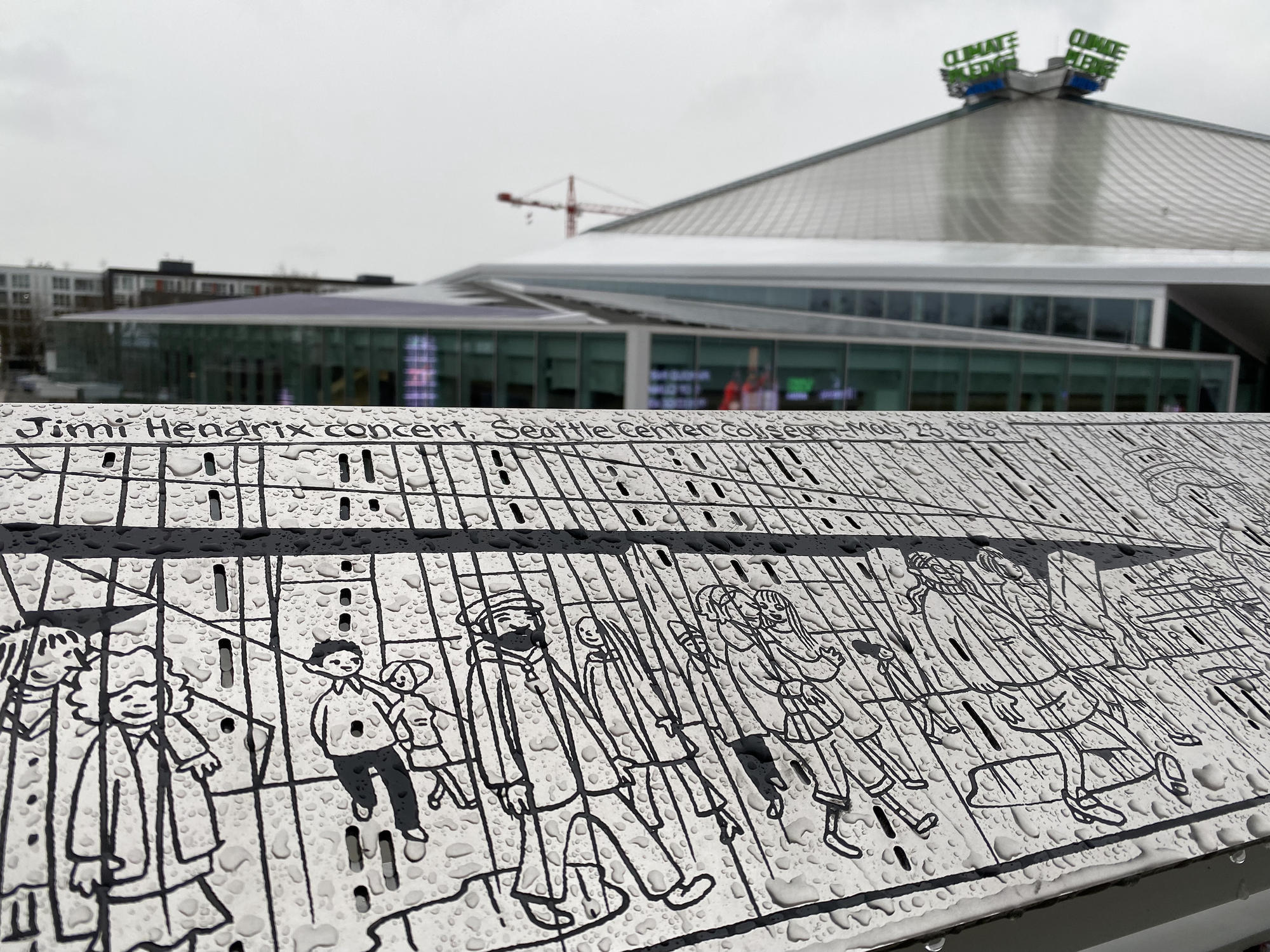 Taking Alaskan Way — which seems to shift traffic patterns every month as the new waterfront emerges — I next visited Seattle Center, where longtime Seattle cartoonist Megan Kelso has just installed a different type of regional timeline. Hers is in the form of an 85-foot-long comic etched in stainless steel, which stretches along a handrail facing Climate Pledge Arena.

Called “Crow Commute,” it’s part of the slew of new public art that arrived with the 1962 World’s Fair arena’s big Kraken makeover. “It works as both a timeline and a map,” Kelso told me via email. The southernmost panel depicts a crow roosting area in Tukwila’s Fort Dent Park, and the northernmost panel shows a regular crow roosting spot near the Kenmore Park & Ride. “The entire piece,” she said, “is kind of a map of the routes that Seattle crows take every day, roughly October to February.”

In between those bookends are stories of Seattle (human) history, from major figures — Kurt Cobain, Lushootseed preservationist Vi Hilbert, Jimi Hendrix, Lummi carver Joe Hillaire — to everyday vignettes and vistas. The comic starts in the middle, with a school-bus yellow panel conveying the Coast Salish prairie located at the site in the precolonial era. Stretching out left and right, time travels forward to 2020 at both ends.

But Kelso said it can be read “every which way.” “My dream viewer,” she noted, “is somebody who goes to Seattle Center regularly, and maybe looks at different chunks each time, and eventually might put the whole timeline/map together.” Which is pretty much the way longtime residents view our cityscape today. 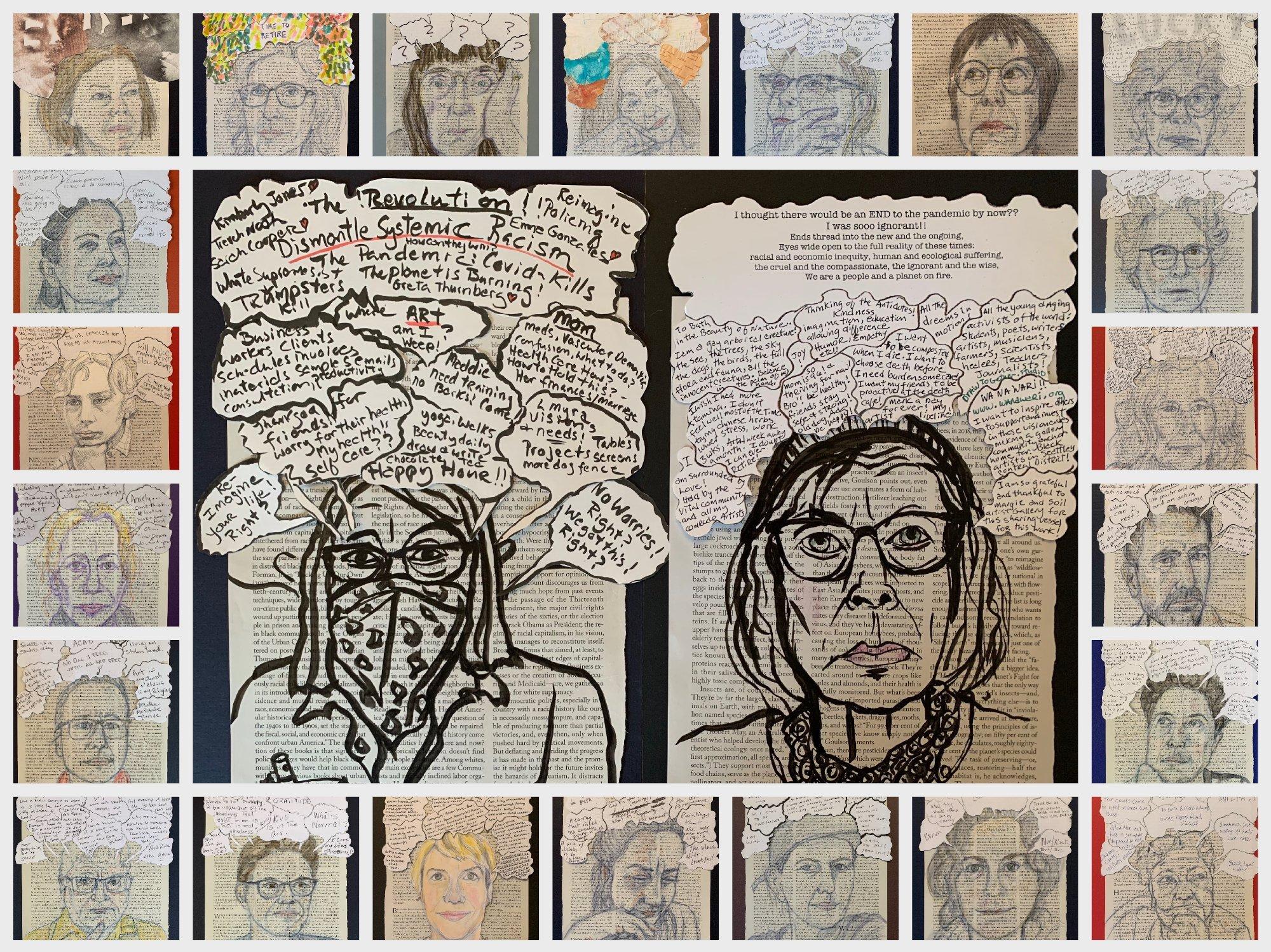 One of the city’s steadfast features (since the 1960s) is the Pioneer Square Art Walk, which rolls around again this evening as the kickoff for many new gallery exhibits. Several of show titles reflect a seriously 2022 mood:

Thoughts in These Times: Pandemic Era Collaborative Art: In the back room at SOIL Gallery (through Jan. 29), Seattle artist Alexis Kane shares collaged portraits she has been making of herself, her friends and family since the pandemic started. Using New Yorker magazines as her canvas, she draws faces with thought clouds clustered above, relatable anxieties from minuscule to immense.

Weirdly Clingy. At Specialist Gallery (through Feb. 19), Seattle soft-sculpture artist Colby Bishop presents snaky, anthropomorphic shapes in an oversized plush format. Although they appear to have sprouted from an alien planet, these vivacious, pillowy forms are designed with a sense of humor for a particularly human need: touch, connection and comfort in times of social distance. 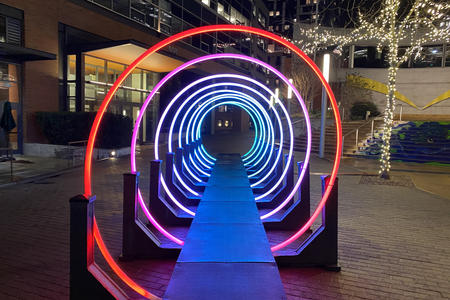 ArtSEA: Let there be light in South Lake Union

New illuminated installations offer a playful escape from the shortest, darkest days of the year. 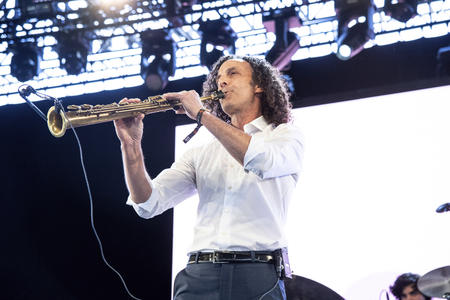 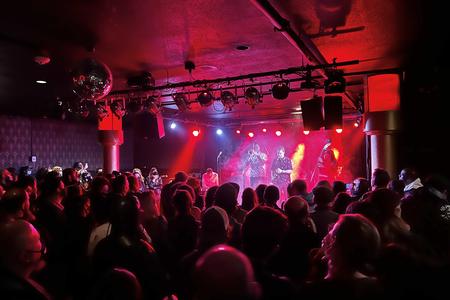 ArtSEA: In the belly of Seattle’s new Crocodile music club

Plus, where to find affordable art over the holidays and events from poetry to protest music.

by / December 2
Article continues below

ArtSEA: Let there be light in South Lake Union

New illuminated installations offer a playful escape from the shortest, darkest days of the year.

ArtSEA: In the belly of Seattle’s new Crocodile music club

Plus, where to find affordable art over the holidays and events from poetry to protest music.