Plus, a show of intricate cut-paper art reveals everyday scenes of Japanese American internment during WWII. 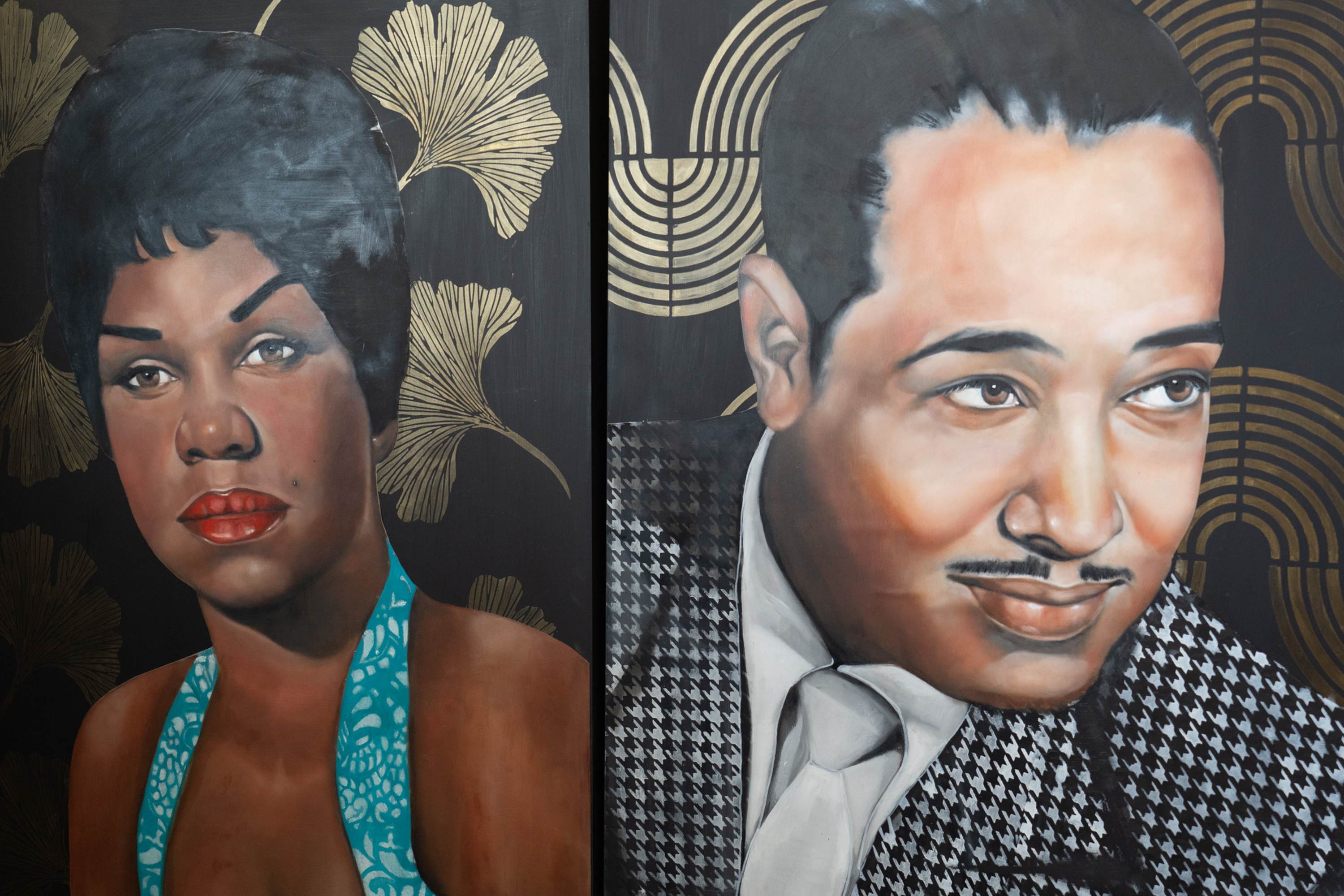 Seattle artist Bonnie Hopper has created portraits of musicians who appeared at Seattle’s storied Black and Tan Club. Before being showcased at MOHAI, her painting of singer Ernestine Anderson (at left) is stacked next to her painting of Duke Ellington. (Chloe Collyer for Crosscut)

By all accounts, E. Russell “Noodles” Smith was something of a slippery character — but the bootlegger and gambler (who always hung on to a dime for a bowl of noodles at the end of the night) was also a real estate magnate and club owner who helped usher in Seattle’s jumping jazz scene in the 1920s and 1930s. As a successful African American businessman, Noodles operated two of the few hotels that would accommodate Black travelers — such as jazz greats Duke Ellington, Count Basie and Louis Armstrong, musicians whom Noodles would invite to play in his Jackson Street clubs late at night, after their formal gigs.

I didn’t know any of these details before diving into the incredibly rich history included in Black & Tan Hall’s Green Book Self-Guided Tour. Now I can’t stop listening. The newly released audio guide — from the local group working to open Black & Tan Hall in Hillman City — is based on the Negro Motorist Green Book, the vital directory published and updated from the 1930s to the 1960s, which featured Black-friendly establishments during the Jim Crow era.

You can download the audio guide as an app or listen and read via the website, which includes historic photos and listings from places like the Green Dot Barber Shop (also an after-hours speakeasy), the Golden West Hotel (owned by Noodles, along with its fancy first floor music club, where Cab Calloway played) and the original Black & Tan Club (an integrated cabaret opened in 1920 by Black businessman Harry Legg).

Also included: Asian-owned hotels — such as the Atlas — many of which allowed Black guests. When Japanese American hotel owners were incarcerated during World War II, however, new white management forced many Black lodgers to leave. 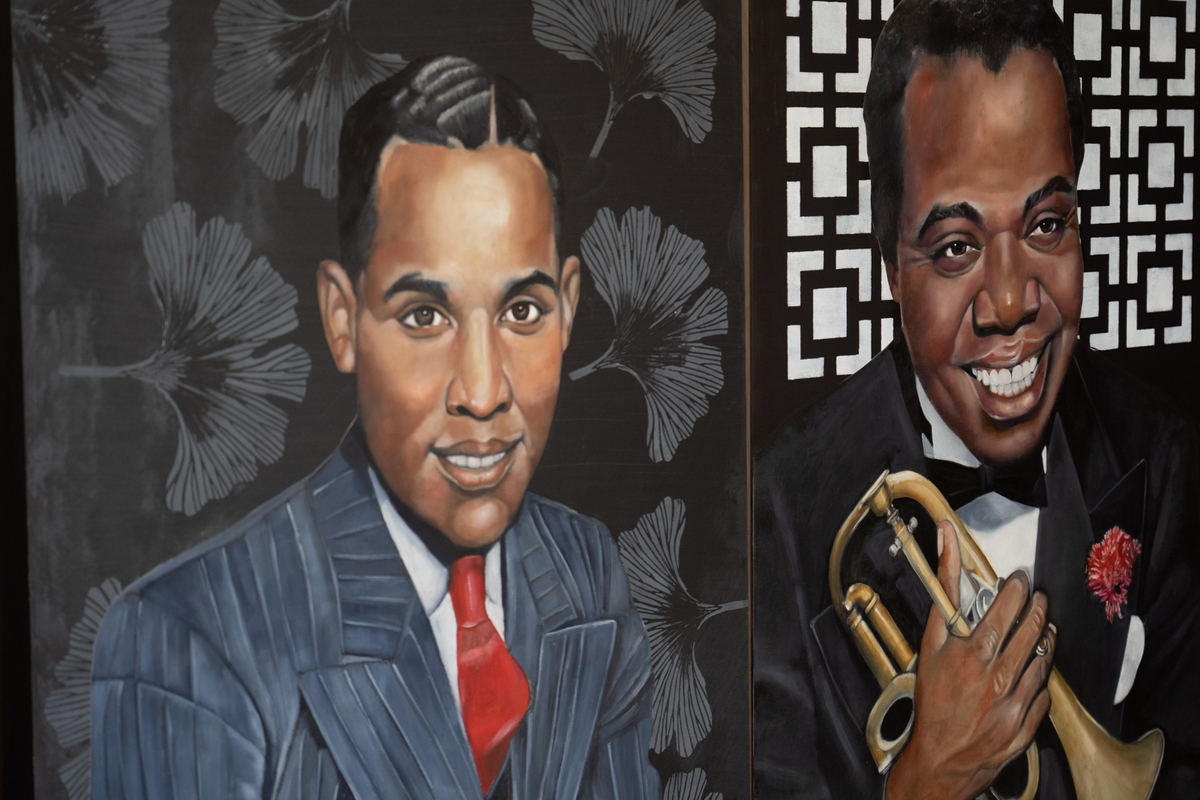 Whatever way you access the archive, I highly recommend doing so. The entries are thoroughly researched (by Black & Tan partner Ashley Harrison, with help from the Black Heritage Society of Washington), and the storytelling is always engaging. Plus: learning about the history of these once thriving establishments in and around the South Jackson Street corridor adds a fascinating and essential layer to our civic understanding of Seattle history.

This weekend, the Museum of History and Industry is hosting a discussion about the new self-guided tour and The Green Book’s influence locally and beyond. The Green Book: More than a Guide (Feb. 19, 11 a.m.-12:30 p.m. in person and on MOHAI’s Facebook Live page) will feature talks by members of the Black & Tan research team, the Black Heritage Society, the Washington State Historical Society and local producer Chris Hopper, who is at work on a musical production about the Black and Tan Club.

The event also features The Black and Tan Collection (on view at MOHAI Feb. 19, 12:30 – 5 p.m.), an installation of 13 paintings by Seattle artist Bonnie Hopper, whose oil portraits feature some of the legendary musicians who played at the Black and Tan Club during its five-decade run.

Hopper created the paintings based on composite images, adding her own imaginative flourishes. “It’s kind of been a journey,” she told Crosscut reporter Margo Vansynghel. “I had no idea people as famous as Count Basie would ever play in Seattle, but they did.” Included in the mix: a portrait of the rarely photographed Noodles Smith. 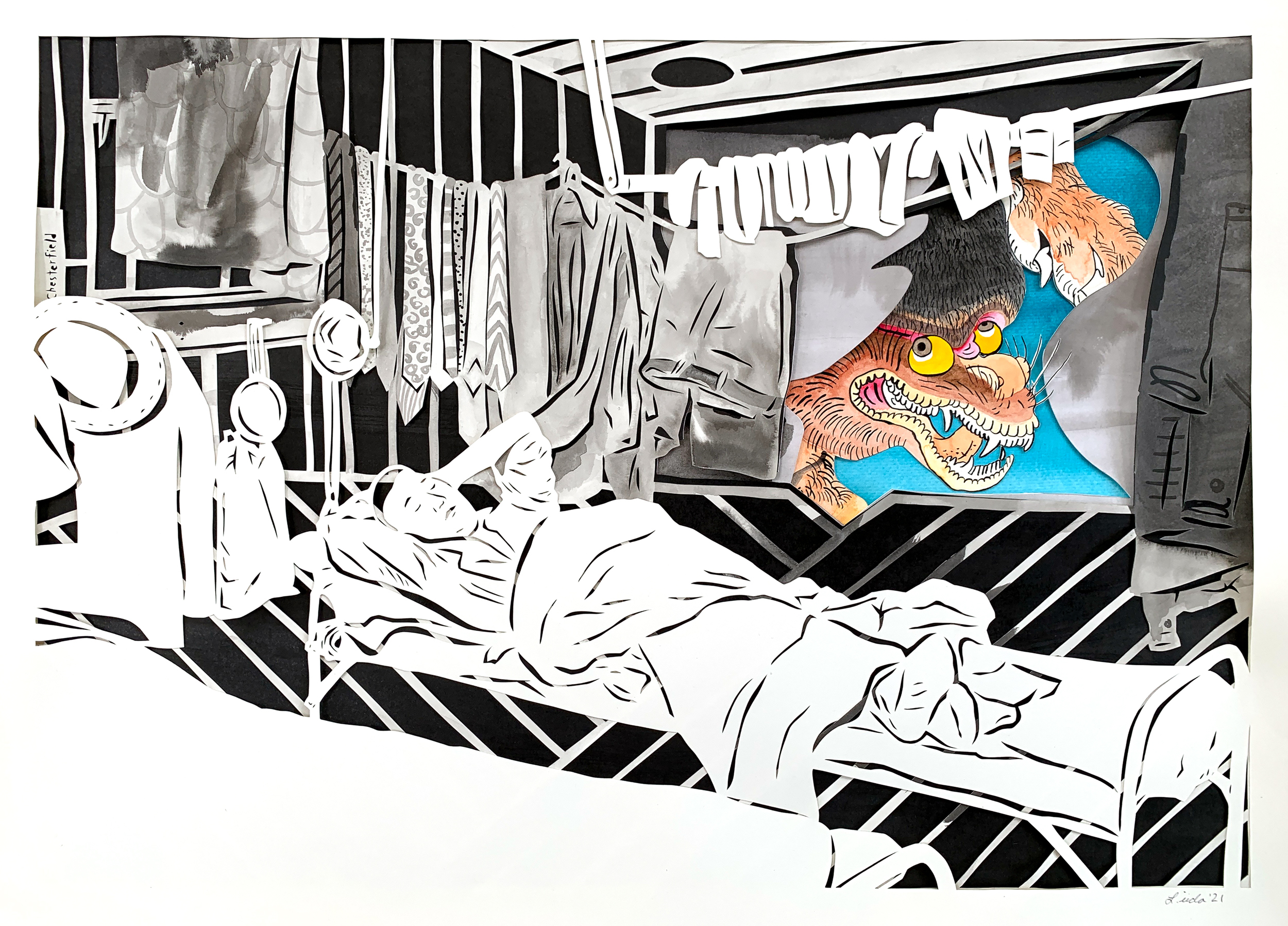 'Nightmare I," by Seattle artist Lauren Iida, is a cut-paper image based on a historic photo from a Japanese American internment camp. (ArtXchange Gallery)

'Nightmare I," by Seattle artist Lauren Iida, is a cut-paper image based on a historic photo from a Japanese American internment camp. (ArtXchange Gallery)

Another wave of Seattle history came rushing into the present when I stopped by ArtXchange Gallery in Pioneer Square, where Seattle artist Lauren Iida has a gorgeous show of intricate paper cutouts called Citizen’s Indefinite Leave (up through Feb. 19). Iida happened to be at the gallery and told me a bit about the show, in which she explores her own heritage in the context of the long legacy of Japanese internment during World War II, including the experiences of her grandmother and great aunt.

Last year, Iida was an artist in residence at Densho, the Seattle-based organization dedicated to preserving the histories of unjustly incarcerated Japanese Americans. With access to the group’s immense archive, she selected photos of everyday life in the camps — women doing hair, people sitting around in the barracks, boys playing rock, paper, scissors — and translated them into exquisite, layered cutout replicas.

Iida showed me the original photos on her phone, holding it up next to the paper cutaways. Her versions are both uncannily accurate (from a hat hung on a nail to the word Chesterfield cut out on a tiny box of cigarettes) and dreamlike — invoking a truth that’s hard to believe. In a spectacular hanging piece called “The Tempo of Courage,” two teenagers playing drums are encircled by protective peachy-pink flowers. In two scenes from the barracks, both called “Nightmare,” she adds traditional Japanese dragons outside the window, peering in with bared teeth. 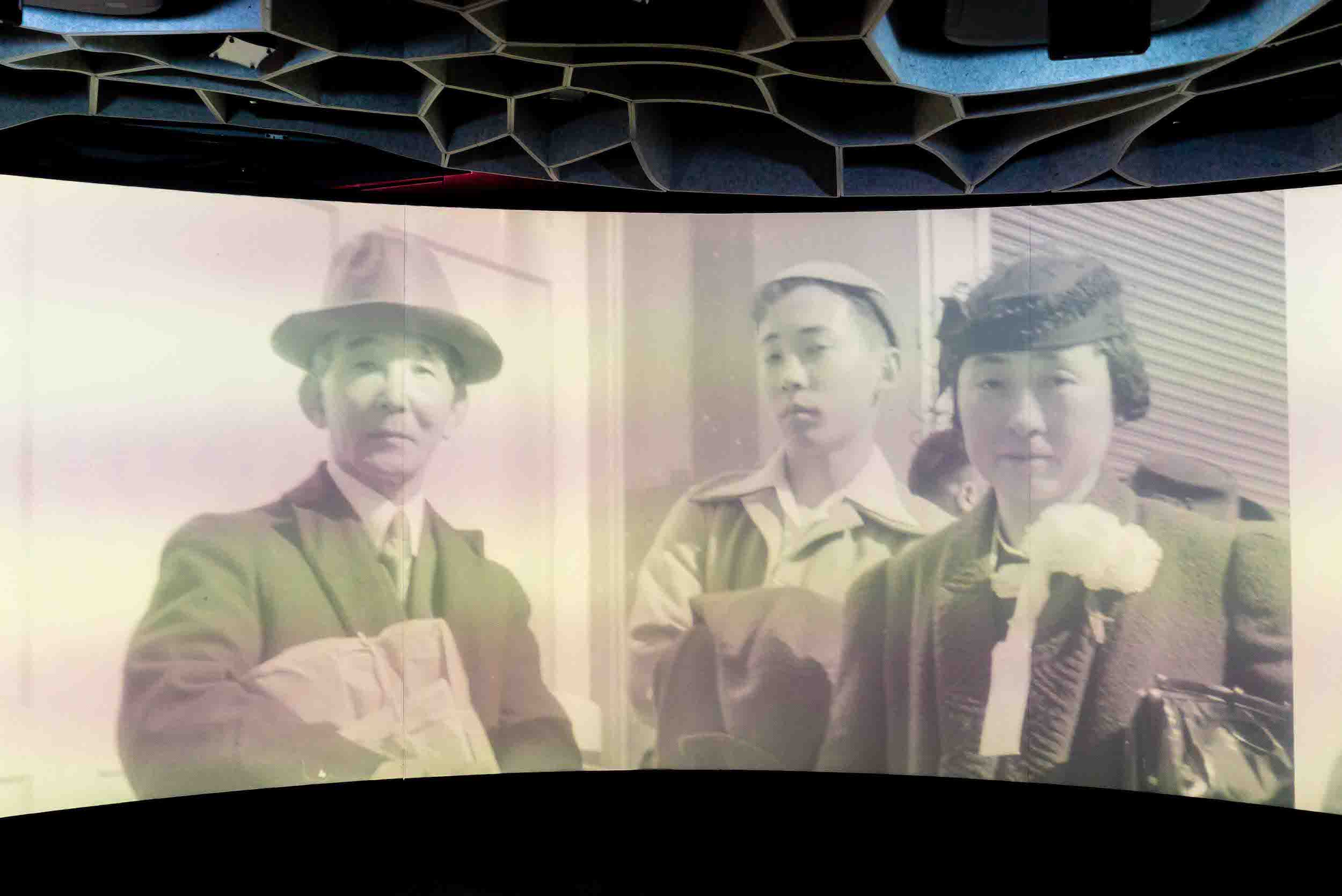 Iida’s show is one of many local events timed with the 80th anniversary of Executive Order 9066, which led to Japanese American internment. The exact date President Franklin D. Roosevelt signed the order was Feb. 19, now observed as a Day of Remembrance with many associated events around Seattle.

In a virtual presentation with Densho, Iida will present another piece: her “Memory Net Remembrance Project,” a long, cut-paper net into which she has incorporated paper replicas of objects that, to Japanese Americans in the community, signify resistance and resilience (Feb. 19, 3 p.m. Free with online registration).

The Seattle Symphony is streaming the EO9066 concert it presented live in January, which features the world premiere of Paul Chihara’s Beyond the Hills, based on his memories as a child living in the camp in Minidoka, Idaho, and Kishi Bashi’s contemporary orchestral piece Improvisations on EO9066, based on his recent visits to internment sites (Feb. 17-24, free on Feb. 19). Accompanying the concert is Pictures of Executive Order 9066, a multimedia exhibit created specifically for the symphony’s state-of-the-art Octave 9 space, featuring photographs by Dorothea Lange and music by Kishi Bashi (Feb. 19, 1-7 p.m. $12).

Michelle Kumata, whose immersive mural Emerging Radiance: Honoring the Nikkei Farmers of Bellevue I wrote about last week, has a simultaneous show at Bonfire Gallery in the Chinatown-International District, called Regeneration. Smaller in scale but strong in impact, these paintings were born of a survey she conducted among local Japanese American descendants about the lasting impact of World War II incarceration (through March 26).

Bonfire, by the way, is housed at the base of the historic Panama Hotel. There, in the first-floor tea house, you can peer down through a plexiglass window in the floor and see stacked and dusty belongings — stored there by families suddenly forced to leave thriving businesses and comfortable homes, and who for a whole host of reasons never returned.