A new Seattle exhibit recycles fan blades from the defunct Satsop nuclear power plant into displays of art and environmentalism. 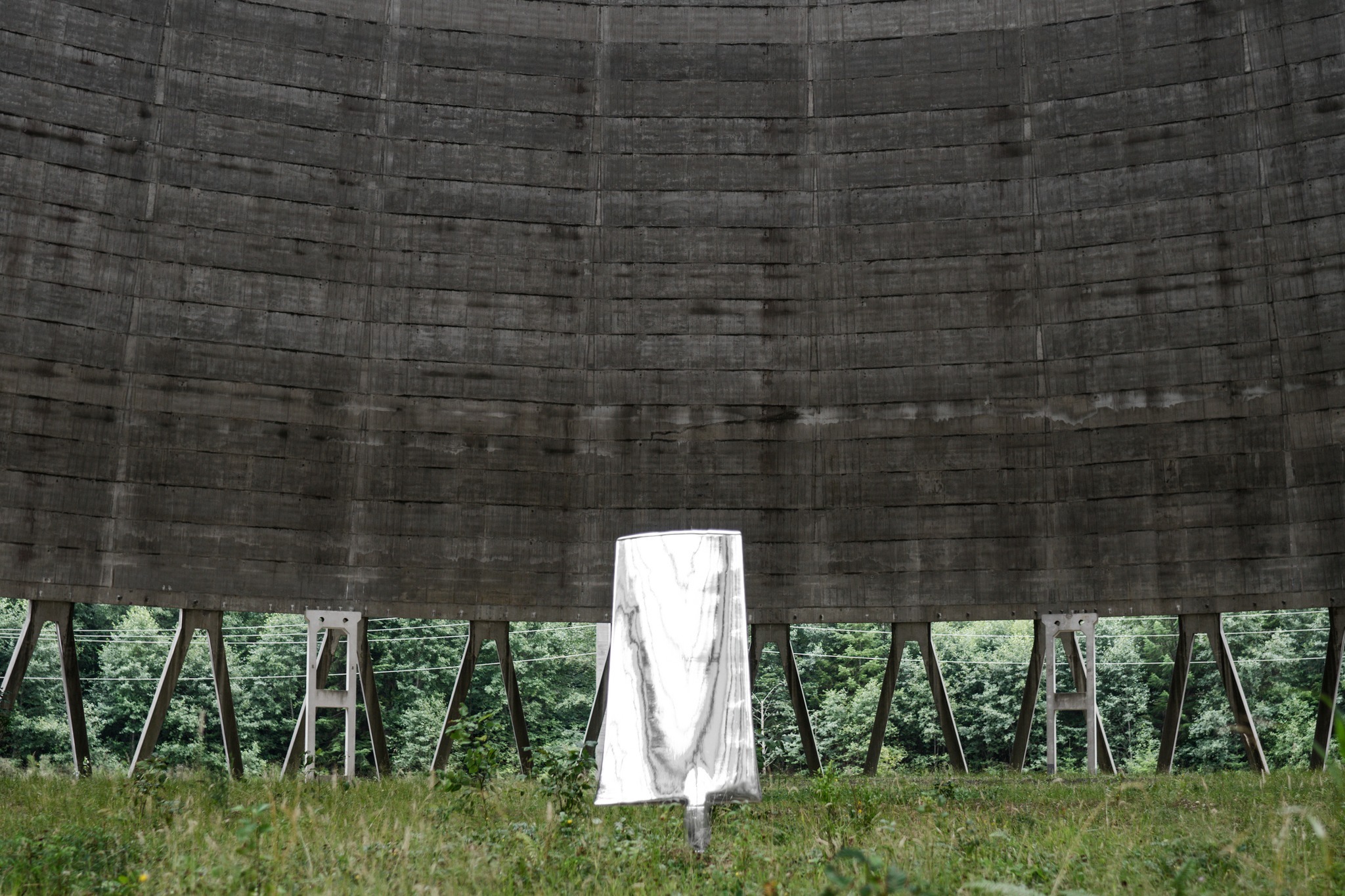 With her ‘Blades of Change’ project, Northwest artist Jill Drllevich is turning fan blades from the defunct Satsop nuclear power plant into art installations. Here, a blade she coated in chrome stands at the base of one of the cooling towers. (Jill Drllevich)

The movie WarGames came out in June of 1983. Billed as a sci-fi thriller, it stars Matthew Broderick as a computer savvy Seattle high school student who accidentally hacks into a military supercomputer and sets off a simulation that may bring about total nuclear annihilation. (Largely filmed in Los Angeles, some scenes were shot in the Washington towns of Darrington, Mount Vernon and Newhalem.) After gaming out Soviet and American strikes against each other, the computer famously concludes “the only winning move is not to play.”

It was a big hit that summer and went on to earn three Oscar nominations, including Best Screenplay. My sister and I would quote that computer line (in the robotic computer voice) as we conducted our teenage years under the looming threat of nuclear war. The year 1983 was a big one for nuke fears. The Cold War had ramped back up to such an extent that Mr. Rogers did a weeklong series that illustrated Mutually Assured Destruction with puppets, and ABC’s broadcast of the “made for TV movie” The Day After was a national cultural event.

If you’re old enough, you’ll remember that everyone — an estimated 100 million people — watched The Day After, a terrifying fictional story about nuclear war and its aftermath. (The comments on the YouTube trailer page are filled with Gen Xers saying it scarred them for life.) As a high school sophomore in the Virginia suburbs of Washington, D.C., I remember looking at blast zone maps with friends, all of us expressing relief that at least we would be vaporized immediately, rather than left to wander in the irradiated landscape of “nuclear winter.”

I haven’t felt hovering anxiety about nukes for decades, but with Putin reiterating the nuclear option, it’s starting to creep in again — a seamless pass of the worry baton from COVID to Cold War. 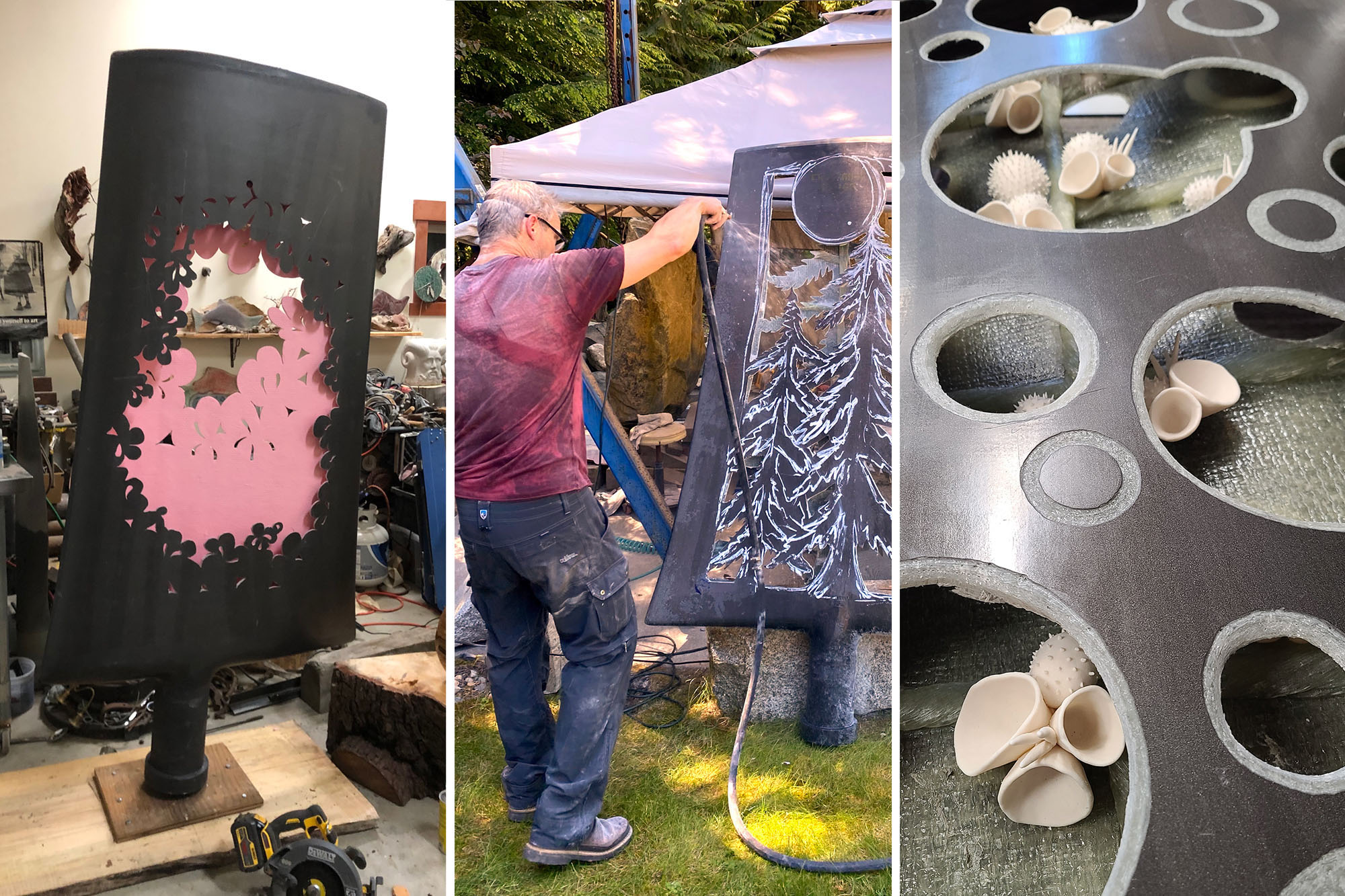 Three ‘Blades of Change’ in progress, from left to right: Lauren Iida’s sakura cherry blossoms, Craig Breitbach’s collaboration with project founder Jill Drllevich, and a detail of Carolyn Autenrieth’s piece, which she is insetting with porcelain “growth clusters” to suggest rebirth. (Courtesy of the artists)

Three ‘Blades of Change’ in progress, from left to right: Lauren Iida’s sakura cherry blossoms, Craig Breitbach’s collaboration with project founder Jill Drllevich, and a detail of Carolyn Autenrieth’s piece, which she is insetting with porcelain “growth clusters” to suggest rebirth. (Courtesy of the artists)

Coincidentally, 1983 was also the year construction of the Satsop Nuclear Power Plant was shut down, due to cost overruns. Two of the telltale cooling towers are still prominently visible in Elma, in Grays Harbor County, an eerie monument to a power plan that didn’t pan out. (The complex is now an office park; before the pandemic, you could reserve the towers and tunnels for film, photography and sound projects.)

Around 2008, longtime Northwest artist and environmental activist Jill Drllevich had the chance to purchase a piece of this nuclear history: some 200 fan blades intended for use in the Satsop reactor facilities, found at a salvage yard in Tacoma. She saw the potential of these 200-pound, 5.5-foot-tall fiberglass relics as artistic canvases that could double as ecological statements.

Drllevich first revealed her project at the Seattle Design Festival in 2017, where she presented three of the fan blades, which she had chromed to a brilliant silver that reflected viewers back at themselves. A couple years ago, she started inviting local artists to put their own mark on the found objects — in an ever-evolving effort called Blades of Change.

“We’re taking something that symbolizes something negative, like nuclear bombs, power plant meltdowns and consequences of nuclear waste, and turning it into something positive,” she writes on her website. 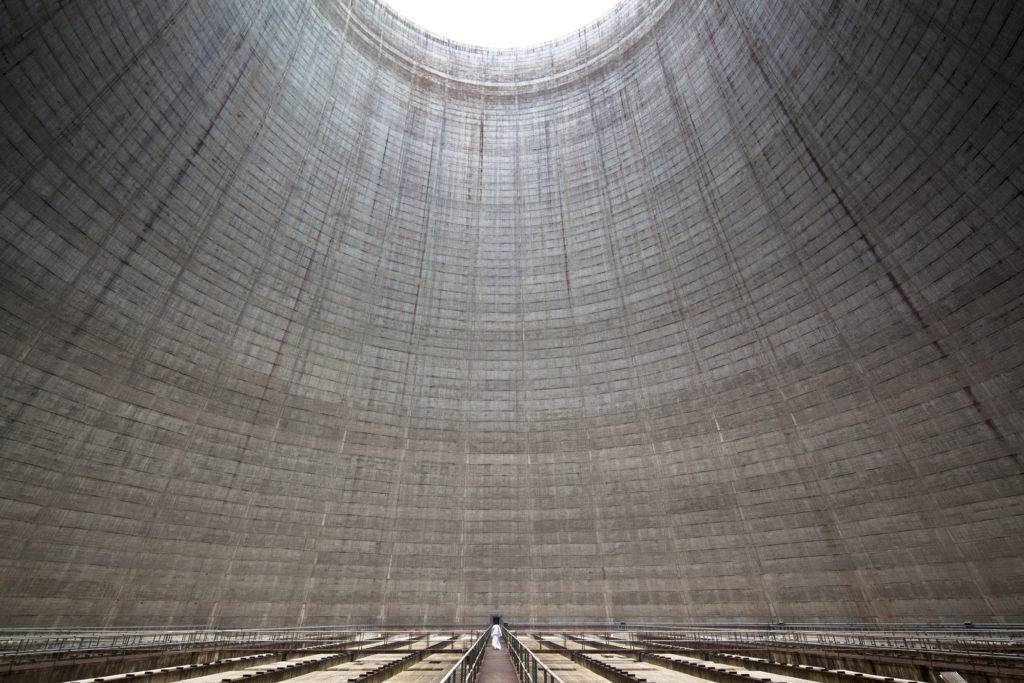 Etsuko Ichikawa (the tiny figure in white) inside a cooling tower at the never-completed Satsop nuclear power plant. (Sean Frego)

Etsuko Ichikawa (the tiny figure in white) inside a cooling tower at the never-completed Satsop nuclear power plant. (Sean Frego)

Drllevich isn’t the only local artist to use Satsop as environmental inspiration — in 2013, longtime Seattle-based Japanese artist Etsuko Ichikawa (who has since moved to Hawaii) created a beautiful, meditative short film at the empty reactor. Called Echo at Satsop, the four-minute piece was prompted by the tsunami that hit Japan in 2011, and the subsequent meltdown at the Fukushima nuclear power plant.

The look and message of Drllevich’s fan blades also reminded me of Seattle sculptor John T. Young’s The Fin Project: From Swords to Plowshares. For the 1998 installation at Magnuson Park, he turned 22 fins from decommissioned U.S. Navy nuclear submarines into what looks like a pod of orcas swimming near the shore. Back then, he called it a symbolic reference to the end of the Cold War.

Drllevich’s own “unconventional nuclear art exhibition” will be on view starting March 12, with Blades of Change: The Tipping Point at Fogue Studios in Georgetown (through April 23). The show features fan blades transformed by seven artists — Lauren Iida (whose cut-paper work I wrote about recently), Carolyn Autenrieth, Peter Reiquam, Esther Reiquam, Craig Breitbach, Joy Hagen and Colleen Monette. They’ve made use of everything from paint to saw cuts to ceramics to sweaters. And Drllevich says more and more artists have reached out with interest.

When she first began planning the show, Drllevich told me, she had no idea it would have such new relevance, but with Russian forces having captured the Chernobyl exclusion zone in Ukraine — site of the massive nuclear disaster in 1986 — nuclear power plants are back in the collective consciousness. But she noted that she isn’t against nuclear power as a clean energy source. After learning about Bill Gates’ TerraPower, a “next generation” nuclear power project, Drllevich understands its potential. “I just want people to think about it,” she says. 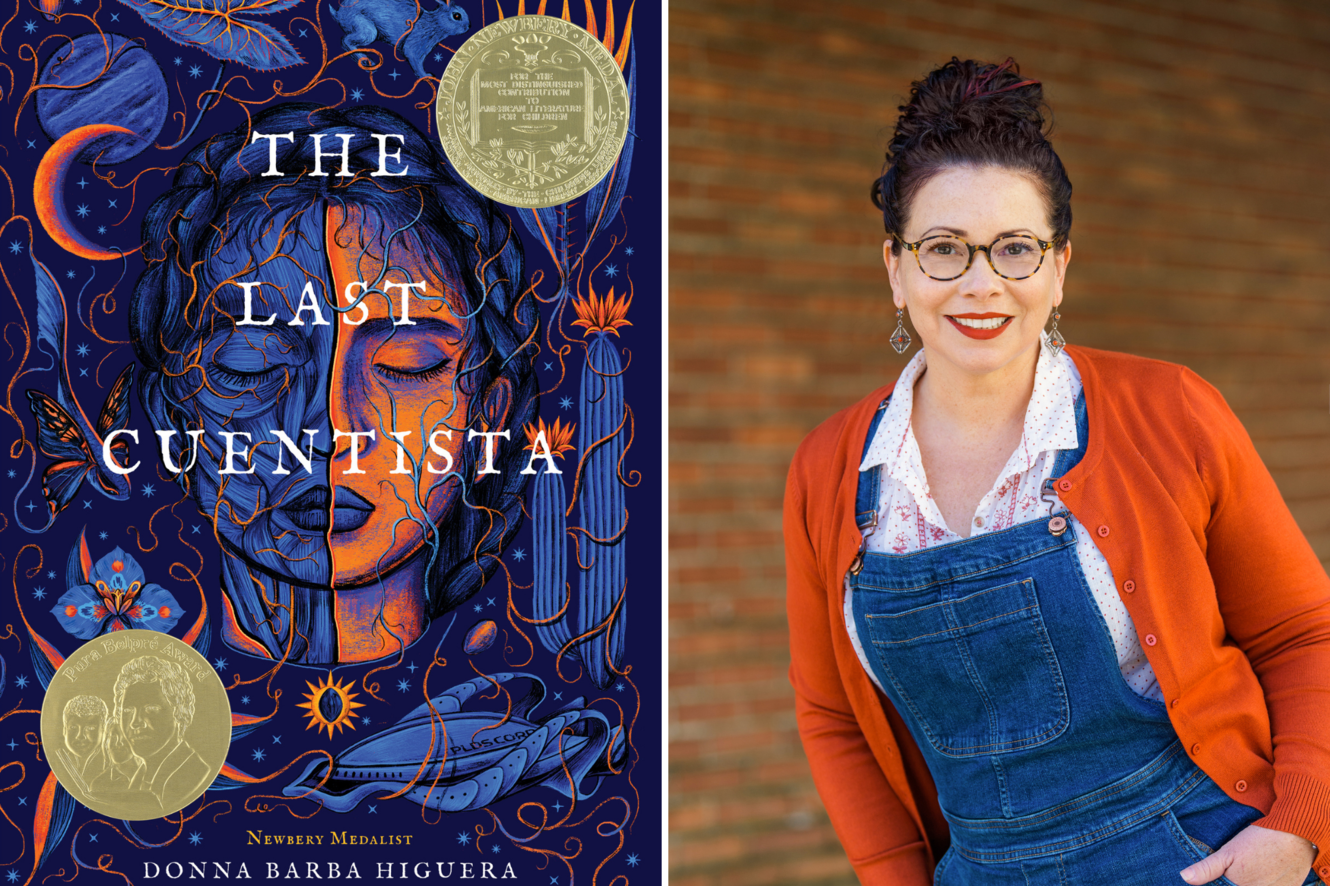 A few things to do to keep your creative spirit flowing this week:

• Seattle Asian American Film Festival (March 3-13). For its 10th annual event, SAAFF is presenting 13 feature length films and a whole lotta shorts online, plus several drive-in movie screenings. As always, the offerings are enticingly diverse, including documentaries about the Filipino diaspora, professional snowboarder Jess Kimura and the six Chinese men who survived the Titanic only to be kicked out of the U.S. due to racist prejudices.

• The Last Cuentista, by Donna Barba Higuera (at Seattle Public Library via Facebook Live, March 4 at 6 p.m.). Crosscut reporter Margo Vansynghel profiled this Issaquah author after she won the 2022 Newbery Award. Higuera will discuss her gripping dystopian novel about a Mexican American girl who goes off-planet after a comet obliterates Earth.

• The Band’s Visit (at The Paramount Theatre, March 8-13). Winner of 10 Tony Awards, including Best Play, this Broadway musical based on an Israeli film is about an Egyptian orchestra that gets stranded in the desert and ends up taking shelter with Israeli families.