While statewide requirements end March 12, many Seattle theaters will keep their mask-and-vax policies at least through this spring. 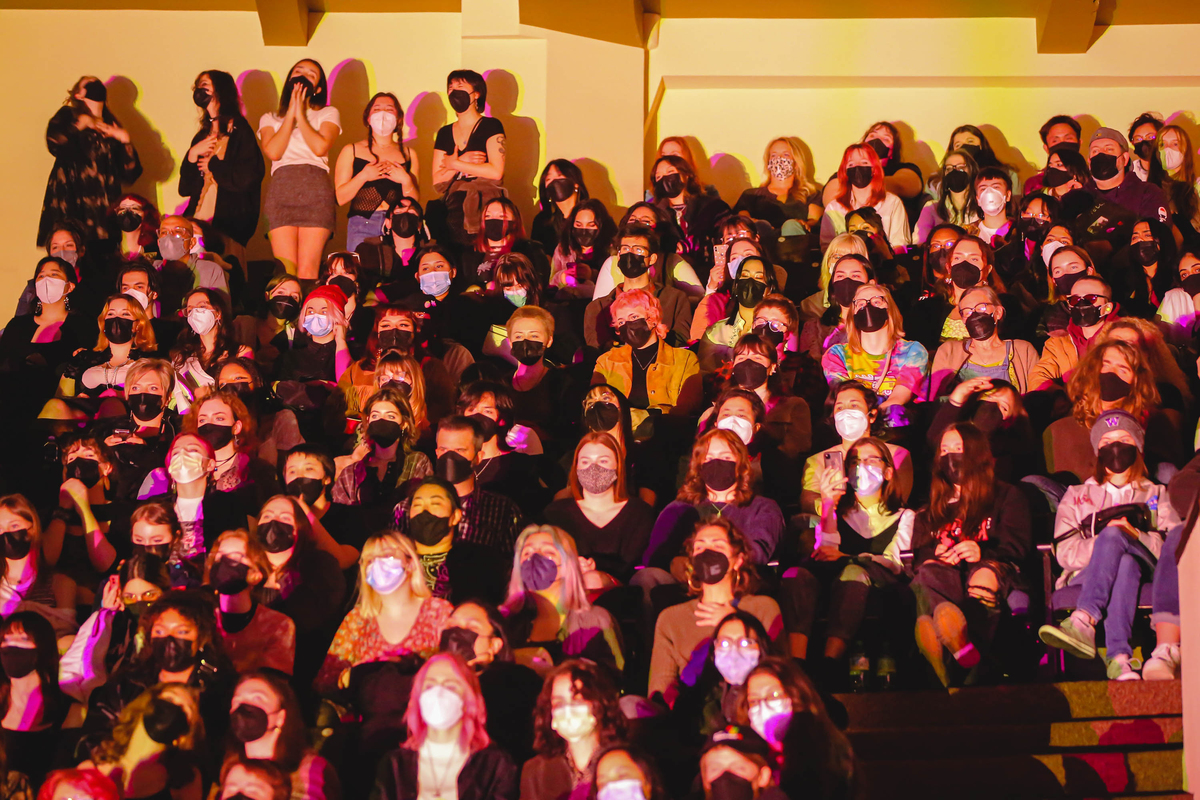 A masked-up crowd watches Mitski perform March 9, 2022, at the Moore Theatre in Seattle. Many Seattle performance venues, including the Moore, will keep masking requirements in place after the mandate ends on March 12. (Genna Martin/Crosscut)

Starting March 12, masks will no longer be required in many indoor public spaces around the state and in King County, including libraries, restaurants, gyms and grocery stores. But don’t throw out those KN95s so fast. You’ll still be expected to wear a mask in your Uber, on the bus, train and light rail, and in medical facilities — as well as in many performing arts venues around Seattle.

That’s because many heavy hitters in Seattle’s theater, dance and music scene have decided to keep mask (and in many cases, vaccination) requirements in place at least until the end of May. Under Gov. Jay Inslee and King County’s announcement, private businesses can choose to implement their own mask requirements. Seattle’s performance venues — including the Seattle Opera, Seattle Symphony, The 5th Avenue Theatre, Seattle Rep, ACT, the Paramount, Moore and Neptune Theatres, and a host of smaller theater venues — have banded together to implement the rules (largely) sector-wide, much like Broadway in New York City, where 41 theaters are keeping requirements in place despite rollbacks.

“For us, it’s about safety for our patrons, as well as our artists and staff,” says Bernie Griffin of Seattle’s 5th Avenue Theatre. “We are going to keep those mandates in place until at least May 31, where we will then reassess.” (Some venues have not decided on a deadline but plan to reassess their regulations on a rolling basis.)

Preliminary data from an ArtsWA survey of Washington state arts and culture organizations shows that only 30% of those surveyed plan to end both mask and vax mandates. Many music venues — from The Tractor Tavern to the Climate Pledge Arena — are dropping both requirements. 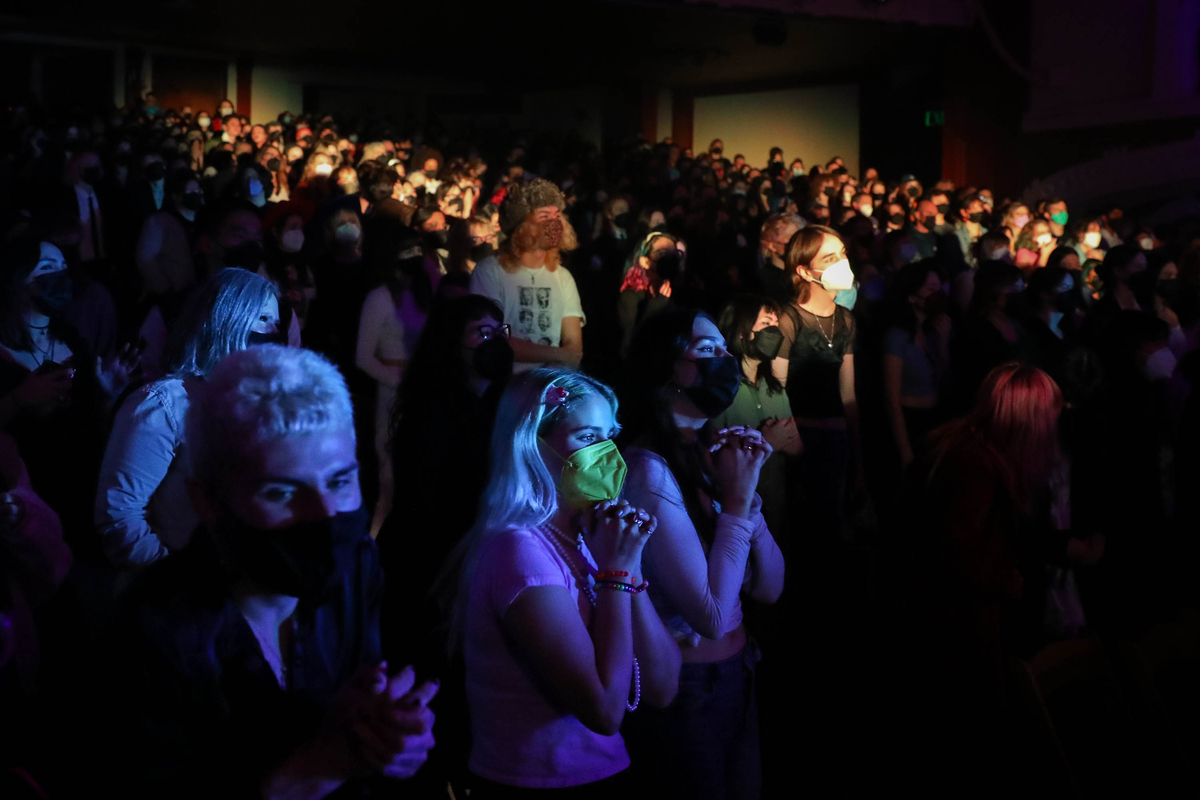 Amid a surge of COVID-19 cases in Washington that were driven by the delta variant, local theaters joined forces last summer to require proof of vaccination before it became mandated by the state and county. “Our audiences had been asking us for it repeatedly,” says Joshua Gailey, communications and public engagement manager at the Seattle Opera. “It really did seem to give audiences the confidence to return to live theater safely.”

Now, the thinking is that a continued mask-and-vax mandate will maintain that confidence.

“The precautions we have in place have allowed many people to feel safe coming back to the theater rather than staying home and missing out on the arts,” says Karen Lund of Taproot Theatre Company. “The arts provide so much value to people’s lives, and we want audiences to continue feeling safe enough to come out to enjoy a play.”

And theaters need those audiences. While the sector is seeing a spring resurgence with a host of new productions and splashy crowd-pleaser shows hitting the stage, the audience return has been somewhat sluggish with audience numbers still a ways from prepandemic levels. After the early-winter omicron surge and a few sudden cancellations of winter performances due to staff outbreaks, the industry is taking no risks — and not just for its audience.

“The actors come to the theater night after night to perform unmasked in a small house, where they’re exposed to around 1,000 people each week,” says Lund. “In such an intimate space, keeping the mask and vaccine requirements for our audience allows the sense of safety that they need to bring their best performance to the stage.”

For some actors, other performers and stage employees, these safety concerns are baked into union contracts, protocols or other agreements made with artists months ago.

“We work in close quarters and cannot social distance while doing our work,” says Jennifer Bacon, president of IATSE Local 15, a union representing stagehands. “We are in enclosed spaces with large audiences for extended periods of time, which increases our exposure risks….This increased exposure risk also impacts audiences, many of whom are in higher-risk categories.”

And, says Gabrielle Nomura Gainor of the Seattle Theater Group, the entity that manages the Paramount, Moore and Neptune Theatres: “Many of our performances were booked previously, with these particular COVID-19 safety protocols in place, and we have no plans to renegotiate the terms of these contracts and agreements.”

But even smaller, nonunion theaters have a promise of safety built into individual performer contracts or relationships. “When we cast [our upcoming show The Wind], we ensured our acting company that audiences would wear masks and show proof of vaccination so they could feel comfortable performing unmasked in front of them and being unmasked around each other for the duration of the run,” says Sailor St. Claire, co-artistic director of Noveltease Theatre, a local company that adapts famous literary works for burlesque.

“It's important to us to honor the commitments we've outlined to our company members, especially those who are chronically ill,” St. Claire says, adding that the burlesque scene largely lacks unions to set safety requirements and health insurance and other benefits.

“It's an unregulated space and I think we're all invested in trying to keep each other safe as long as we can, so we never have to livestream from our living rooms again,” St. Claire says. “It feels safer to do crowd work if audience members are wearing masks — especially if we're performing in bars and venues that aren't checking vax cards anymore. The bottom line is that if we cancel a show due to illness, we're not getting paid. So it behooves us to protect ourselves and create our own rules to do so.”

Plus: cancellations are a costly headache. “After essentially two years of minimum earned revenues, we simply can’t afford to shut down production due to an outbreak within the cast. Therefore we will continue to do all we can to keep them as safe as possible,” says Frank Stilwagner of Village Theatre, a musical theater company operating from Issaquah and Everett. 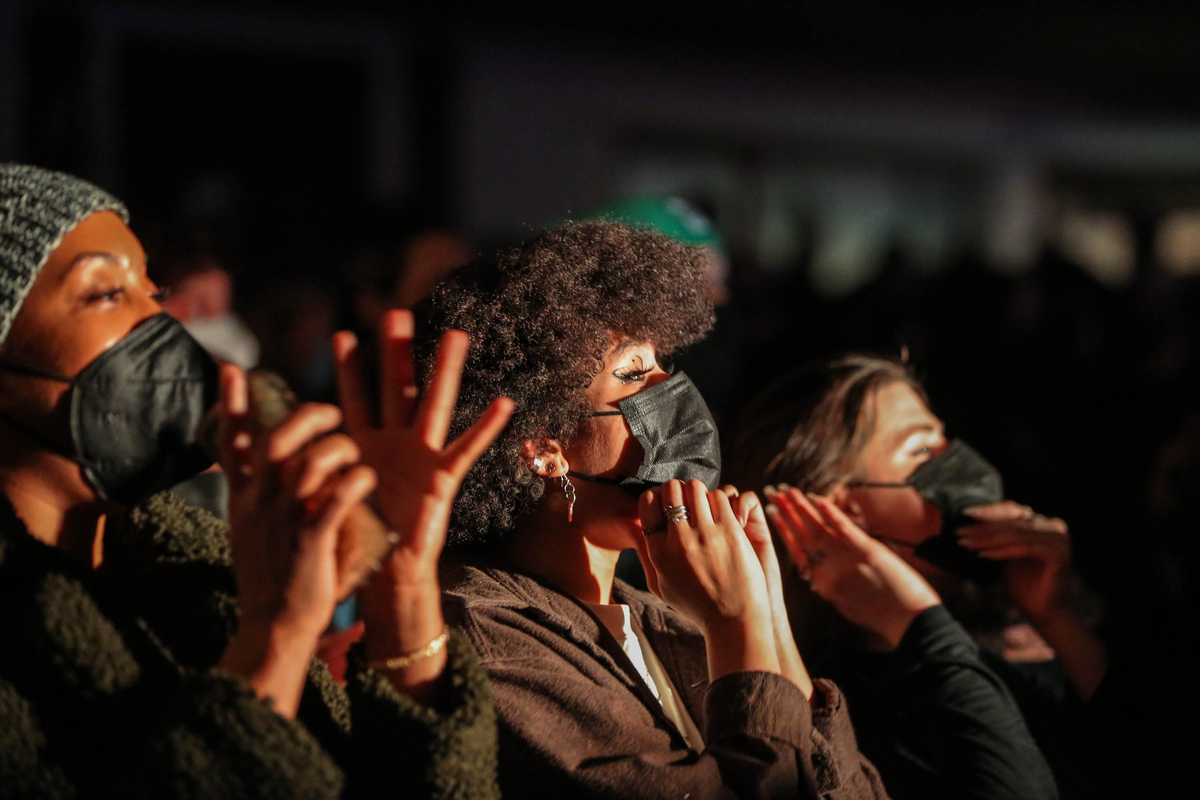 A mask-wearing audience at the Moore Theatre enjoys a Mitski performance on March 9, 2022. (Genna Martin/Crosscut)

A mask-wearing audience at the Moore Theatre enjoys a Mitski performance on March 9, 2022. (Genna Martin/Crosscut)

It’s not just the right thing to do, theater staff say, some patrons are asking for it.

“We believe masking and proof of vaccination have given our patrons the confidence to return to the theater safely, and we have received some comments in the last couple of weeks from patrons who hope we keep our COVID-19 protocols in place for now,” says Gailey of the Seattle Opera.

Next door at Pacific Northwest Ballet, sentiments are similar. “We are hearing far more ‘thank you’ messages for our protocol policies, and very few complaints,” says Gary Tucker, PNB’s director of communications. Like PNB, Seattle Theater Group Executive Director Josh LaBelle has been contacted by a dozen patrons via email or phone who just wanted to thank STG for continuing with its masking requirements and vaccination checks. So far he hasn’t received any complaints.

Recent research has borne this out: The majority of Americans — and nearly three-quarters of likely visitors to performance venues — believe that performance-based organizations should require proof of vaccination, according to a January 2022 study. The research, done by IMPACTS Research & Development, a market research company, also showed that since the start of 2022, audiences rank mandatory face coverings as the most important factor overall for visits to cultural venues. For potential visitors to performance venues specifically, masks are the second biggest factor in making those visitors feel safe, after the ability to be outdoors.

But even with precautions in place, some patrons have remained tepid on returning.  Though audience levels are picking up, many performance venues are still reporting only 50% to 70% of prepandemic numbers.

“We’re finding that audiences are grateful to be able to experience the magic of live theater again after 18 months of closures, but that many are still wary of going out, especially when the omicron variant levels peaked,” says Taproot Theatre’s Karen Lund. “Of the patrons who express to us why they aren’t coming, about 80% are not yet comfortable in public spaces and 20% are disappointed that we have mask and vaccine mandates. Based on this, we suspect that lifting mask mandates will do more harm to theater attendance than good.”

For PNB’s Tucker, mandates are not the audience’s sole drive. “Mandates are less of a driver in audience levels than the virus itself,” says Tucker. “If case numbers continue to go down, more people will feel comfortable coming back to theaters.”

In this context, even as case numbers and hospitalizations continue to decrease in King County and Washington state, tinkering with the tried-and-true formula of requirements feels risky. The sector is still reeling from omicron — no one wants another variant coming in and messing everything up again, now that things are picking back up, if slowly. Single-ticket sales are rebounding, with people often buying tickets closer to performance dates. But subscription sales — the bread and butter of many larger performance organizations — are still notably lagging.

“Our subscription sales are still significantly below where they were pre-COVID,” says Seattle Opera’s Gailey. “We are working hard to build back that subscriber base, but we anticipate that it will be a few years before we see a return to pre-COVID levels.” 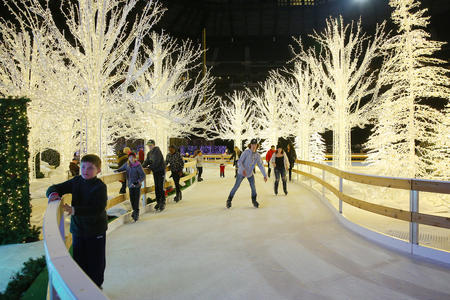 Organizations are taking the Small Business Administration to court after being denied funds from a federal relief program for arts venues. 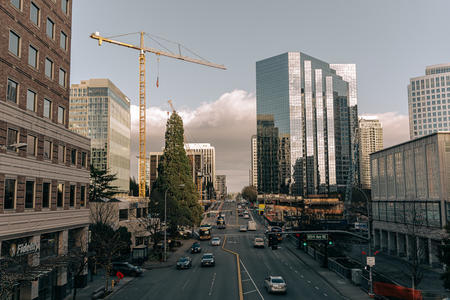 The light rail is coming to Bellevue. Will a vibrant arts scene follow? 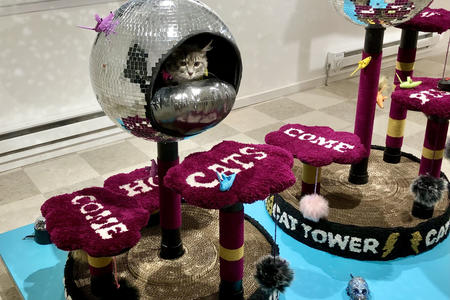 At Museum of Museums, kitties are welcome to test-drive the cat towers designed by local artists, architects and designers.

Organizations are taking the Small Business Administration to court after being denied funds from a federal relief program for arts venues.

The light rail is coming to Bellevue. Will a vibrant arts scene follow?

At Museum of Museums, kitties are welcome to test-drive the cat towers designed by local artists, architects and designers.