The longtime Wallingford bookstore — one of the few poetry-only shops in the country — reopens just in time for National Poetry Month. A customer walks in front of the new Pioneer Square location of Open Books, a longtime Seattle poetry-only bookstore reopening this month, while owner Billie Swift takes down the paper covering the windows. (Margo Vansynghel/Crosscut)

For nearly three decades, Seattle has been home to one of the few poetry-only bookstores in the country, perhaps even the world. Billie Swift has been able to save it from closure twice.

The first time was in 2016, when Swift — a poet and Open Books customer — took over from store founders John Marshall and Christine Deavel, who opened the independent Open Books in a low-slung, street-facing building in the Wallingford neighborhood in the mid-1990s. And this spring, Swift is ushering Open Books into a new chapter in Pioneer Square.

After announcing late last year that the store’s lease was not going to be renewed and the building would go up for sale, Open Books (poetic subhead: "A Poem Emporium") closed in February. But that wasn’t for long. Thanks in part to a successful fundraising campaign, Swift is reopening the beloved store this month in the Good Arts Building, a historic brick building in Seattle's Pioneer Square neighborhood — just in time for National Poetry Month and Independent Bookstore Day (April 30).

The relocation marks a turning point — a volta, in poetic terms, in the storied history of the shop. But the hope is to keep it running on to the next line, more like an enjambment. “We’re going to create a space that we are hoping is going to be around for another 25 years,” Swift says.

On a recent weekday afternoon, the store is still very much in transition. Some books are stacked on shelves in the back, but many more anthologies, chapbooks and rare books (from New-Generation African Poets to The Spoken Word Revolution) still sit encased in several dozen emerald plastic moving boxes, stacks of which form a small labyrinth in the compact, dim space. Already unpacked: Open Books’ oldschool typewriter, which sits on a table near the window. Its “paper fingers” hold up a white page stating a humble mission: “Trying to meet your poetry needs since 1995.”

The sky outside has turned a threatening gray but inside the store — which features plum walls, exposed wooden beams supported by cast-iron columns —  you wouldn’t know it, as the windows are still covered in paper. Right now, Swift is staring at an empty set of custom-built shelves in between the window and the register, pondering an important decision. Where to put the anthologies?

These are the kind of decisions facing Swift in the next few days: how to find room for more than 10,000 books in a space 350 square feet smaller than the previous space, which was known for its compact footprint?

“This space feels a lot bigger but in actuality, it’s smaller — that’s one of the things we’re working through,” Swift says. While the store's size presented a logistical puzzle, it was love at first sight when Swift and her team visited the space late last year. “The first time I stepped into this new physical space, my immediate response was …'This is the space where the store was always meant to be,’” says Gabrielle Bates, Open Books’ social media manager and a celebrated local poet. “Something about the openness, the windows, the palpable history of the building itself, felt so right.”

Perched on the corner of First Avenue and Cherry Street, a chapbook’s throw from various underground tours and Pioneer Square Park, the three-story, brick-clad, cast-iron building arose in the late 1800s. Built in the Romanesque Revival style popular during the downtown’s great rebuild (after the Great Seattle Fire), today the building is home to two dozen artist studios and other small businesses, including anchor tenant Cherry Street Coffee.

“I love being surrounded by the old building,” Swift says. “I love the fact that there's art happening in the building and that it's on display down here. We are part of a community of artists.”

Plus, the store is perfectly perched to feel — and hear — the pulse of the city. “I love watching people go by ... sort of hear life happening,” she says. “But it’s also kind of oddly quiet,”  she adds, noting that there’s less car noise compared with the previous, North 45th Street location. In the brief silence that follows, we hear seagulls squawking in the sky. 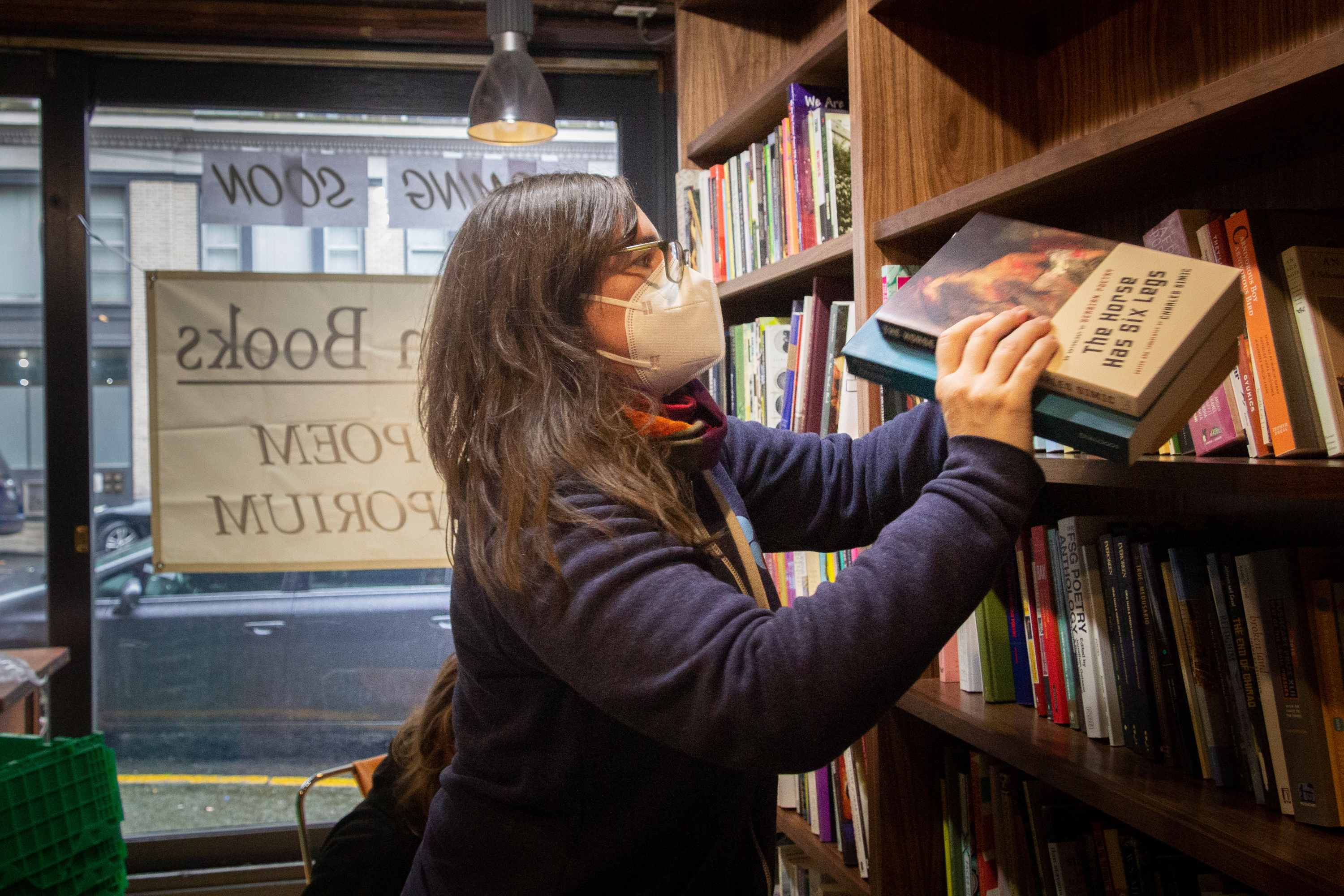 Billie Swift adds books to the new shelving at Open Books, Seattle's poetry-only bookstore reopening this spring after moving from Wallingford to Pioneer Square. “I am so looking forward to being in the store and all of the interactions that I have with people when they come in, whether it be people who are looking for a specific thing and then finding it [or] people who don't really know what they're looking for," Swift says. (Margo Vansynghel/Crosscut)

Billie Swift adds books to the new shelving at Open Books, Seattle's poetry-only bookstore reopening this spring after moving from Wallingford to Pioneer Square. “I am so looking forward to being in the store and all of the interactions that I have with people when they come in, whether it be people who are looking for a specific thing and then finding it [or] people who don't really know what they're looking for," Swift says. (Margo Vansynghel/Crosscut)

These past two years, bookstores have held competing truths as well. Like many businesses, bookstores experienced serious pandemic challenges, with in-store shopping options and events (a major revenue driver for indies) curtailed. But the pandemic has also buoyed the book industry.

Late last year, the American Booksellers Association announced that its membership had increased, with both brand-new stores and existing stores that had not been part of the trade group. (It’s unclear how many of those new stores are solely dedicated to poetry, though there are still only a handful nationwide.) Sales of print books also rose to new heights in 2021, continuing the surge of book-buying that began in the spring of 2020, when many people sat stuck at home, looking for ways to keep themselves occupied and to support their local bookstores.

And, she adds, last year was specifically great for poetry. In 2021, sales of print poetry books grew by 30%, outperforming that year’s general book market growth, according to NPD BookScan. That’s not just because of the pandemic, says McLean. Much of that growth was propelled by Amanda Gorman’s inauguration poem and the continuing popularity of chart-topping Instagram-poet Rupi Kaur.

While that growth has slowed in 2022, the genre remains popular, with poetry book sales currently up 11% compared with the prepandemic 2019, according to NPD BookScan data. That’s in line with what the book market can expect for 2022 as a whole, McLean says: maybe not an exceptional year, but a good year nonetheless.

Bookshops specifically stand to do well, McLean says — and they already are. “Because people want to get out. And they want to go into their communities, and they want to have experiences again around community. Bookshops provide that in spades,” she says. “… Poetry bookshops in particular are the gems of that experience. Oftentimes, they're places for people to gather to listen to poetry, for people to read poetry, they champion a lot of local writers. I think that's all in their favor right now.” 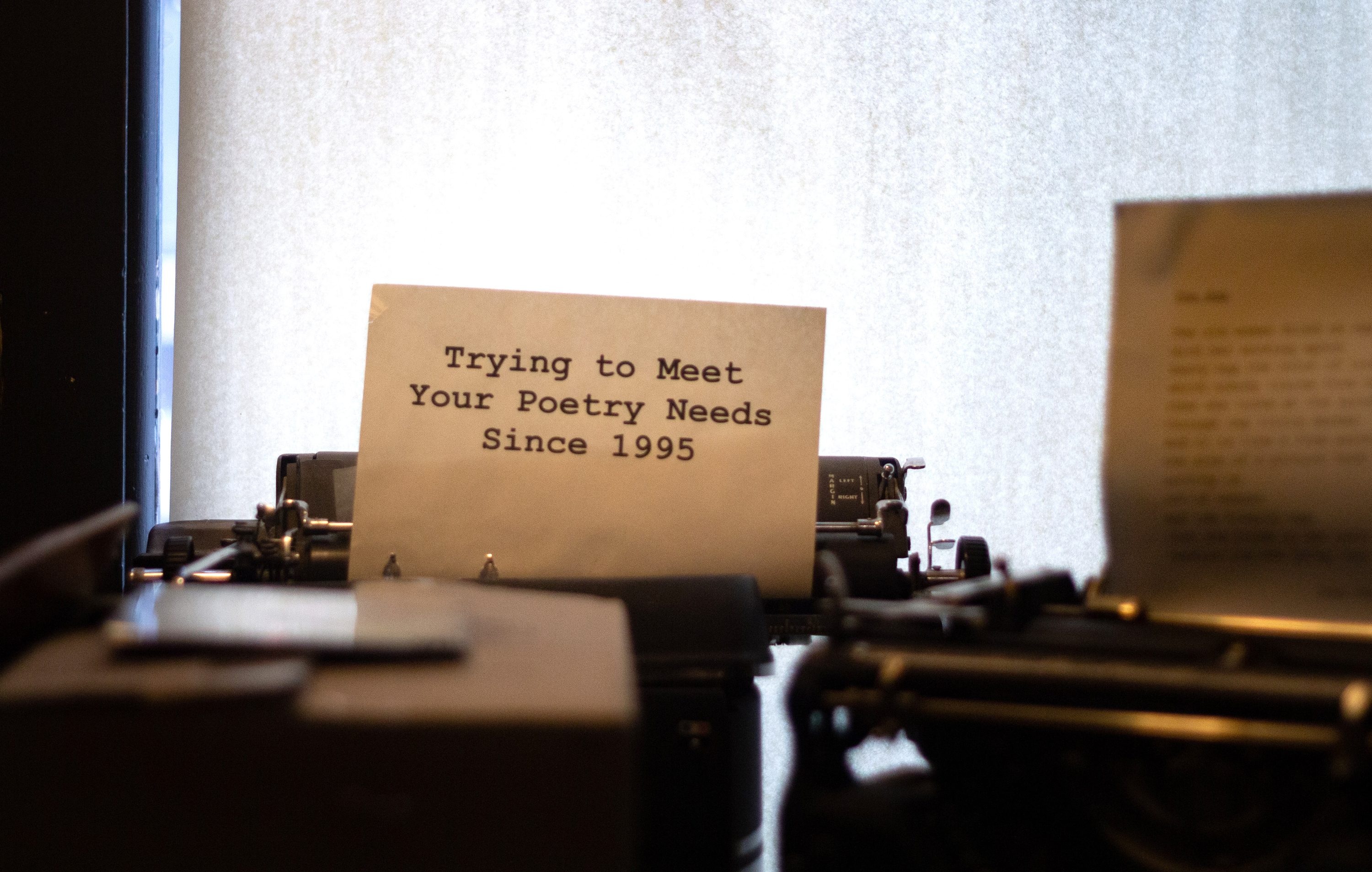 Open Books’ antique typewriter, which sits on a table near the window, holds up a piece of paper stating its humble mission: “Trying to meet your poetry needs since 1995.” (Margo Vansynghel/Crosscut))

Open Books’ antique typewriter, which sits on a table near the window, holds up a piece of paper stating its humble mission: “Trying to meet your poetry needs since 1995.” (Margo Vansynghel/Crosscut))

But Swift remains cautious. Thanks to the pandemic's looming surges and variants, the future remains largely incalculable. That’s why Open Books is still holding off on in-person readings and other events. So no grand opening celebration. The shop’s unofficial opening is Independent Bookstore Day, which Swift plans to stretch to 10 days to give visitors more breathing room.

The store’s pandemic pivot to an online retail system — bringing more accessibility for local customers and an expanded, national reach — has sustained it through the pandemic and will continue to buoy the store’s revenue. But, says Swift, “It's people in Seattle who are going to sustain Open Books.” She hopes foot traffic will exceed the numbers of the previous location, which was more of a destination rather than a “surprise stop.”

She is banking on Open Books remaining a destination for poetry lovers and poets, thanks to its vast collection of volumes and jewels to dig up — used books, journals and out-of-print chapbooks — as well as a knowledgeable bookseller to guide curious customers.

And there’s another, new draw: The Parlor, a smaller, additional room that’s part of Open Books’ footprint. “We’ve put in this cozy reading chair, a turntable, a long, beautiful library desk table, great for a meeting or using as a desk to write,” Bates says. “The plan is to invite poets to use it as a private studio space to do some writing, reading, maybe just think, get outside of their house for a bit.” Open Books will also use the room for its poetry classes and workshops.

But, Bates and Swift note: the extra space comes with an additional cost, and it’s still to be determined whether they’ll be able to sustain the rent on it. “We would love to provide space for people to write and for gathering community, because that's something that artists in Seattle just don't have a lot of: space dedicated to them,” Bates says.

Let alone space dedicated to poetry. “It’s a real rare gift to get to be in a place where one's art is honored and celebrated and supported,” Bates says. “I just really can't overstate the soul value of … what it means to the heart and to the mind to be able to step into a space and have conversations with people about poetry books. Like, where else does that happen?” 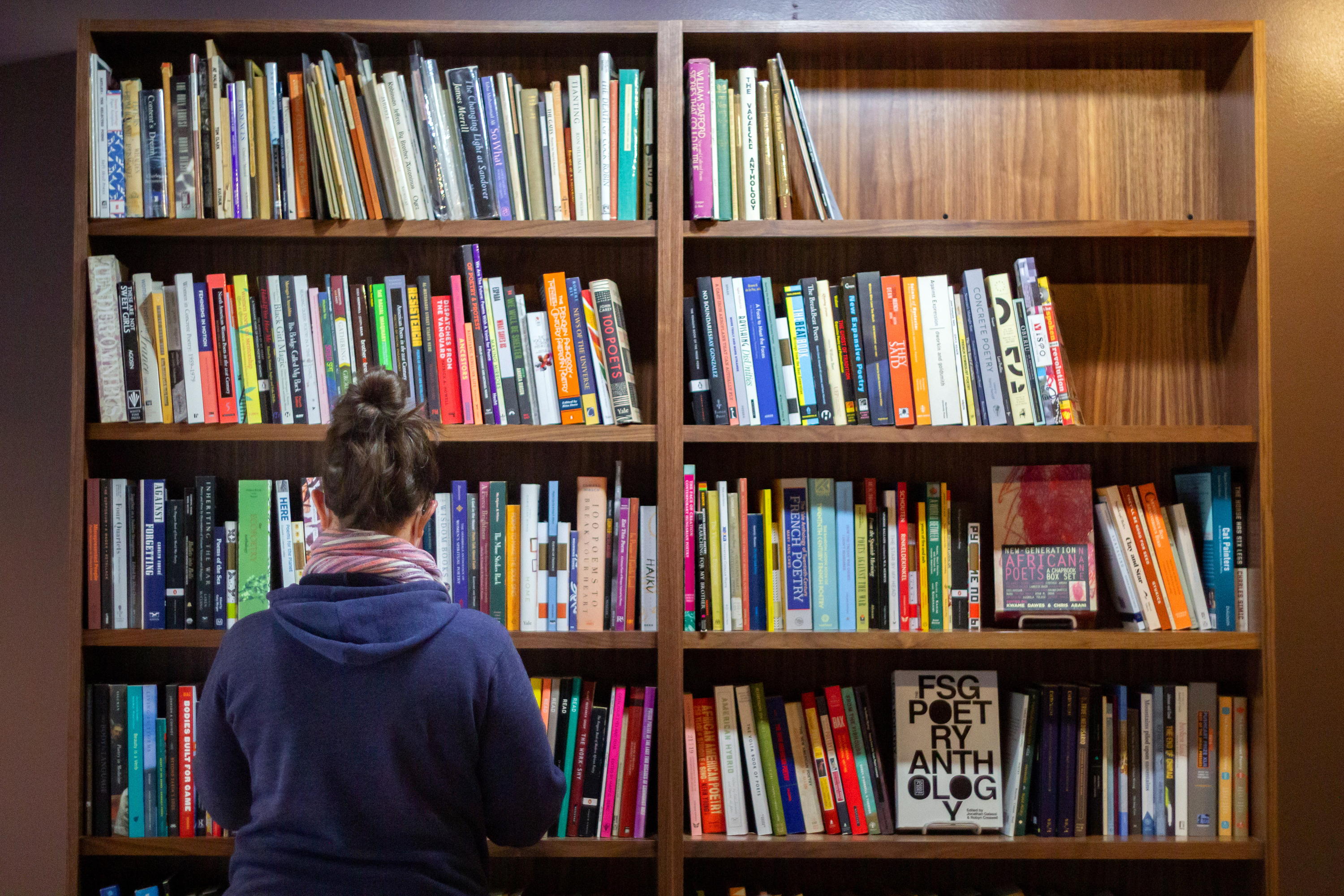 Open Books owner Billie Swift stands in front of the anthologies at the new store. “We’re all in such deep grief and trauma and pain,” she says of pandemic repercussions. She hopes Open Books can be a space where people can either escape or dive headfirst into this pain. What she’s looking forward to: “Being something that people can count on when there’s so much that we can’t.” (Margo Vansynghel/Crosscut)

Open Books owner Billie Swift stands in front of the anthologies at the new store. “We’re all in such deep grief and trauma and pain,” she says of pandemic repercussions. She hopes Open Books can be a space where people can either escape or dive headfirst into this pain. What she’s looking forward to: “Being something that people can count on when there’s so much that we can’t.” (Margo Vansynghel/Crosscut)